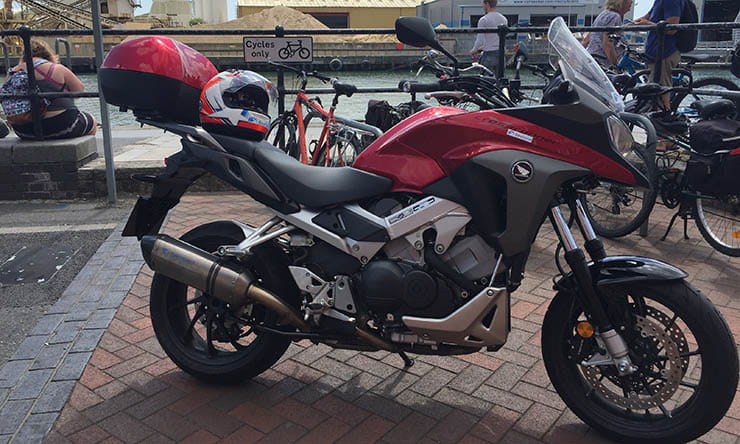 As part of our Real Life Road Test series, our man Scott Redmond spent a couple of day's with Honda's ofter overlooked VFR800X Crossrunner. But after taking the adventure-styled V4 on a date to Dorset, was it love at first sight or a night to forget for Scottie and the Crossrunner? Take it away, big man...

Every so often you get to encounter a motorcycle that is greater than the sum of its parts. On paper, the second generation VFR800X Crossrunner is a real parts bin special. The ‘new’ model is basically a clever rework of what’s basically a ten year old VFR800 and after riding the current VFR800 at the start of the summer it was suggested to me that I sample the Crossrunner to see what I thought of it.

When I arrived to collect the bike it was sat surrounded by several Africa Twins. They looked very shouty compared to the sedate looks of the Crossrunner. The Africa Twin is a healthy seller in the 2016 Honda range, but what about the Crossrunner? How does that fare? I spoke to the guys at Wheels Honda in Peterborough to find out who buys the Crossrunner. They informed me that they sell them to a wide variety of people, from people doing the daily commute to leisure riders.

But what is a Crossrunner? I haven’t ridden its predecessor, and had only heard mediocre reports of its abilities. I approached my time with Honda's 'take two' with an open mind.

From the minute I swung my leg over its 835mm seat height I felt at home. With 22 litres of petrol to convert into greenhouse gases, I wanted to have a proper ride of this intriguing motorcycle. Let's go to Dorset! 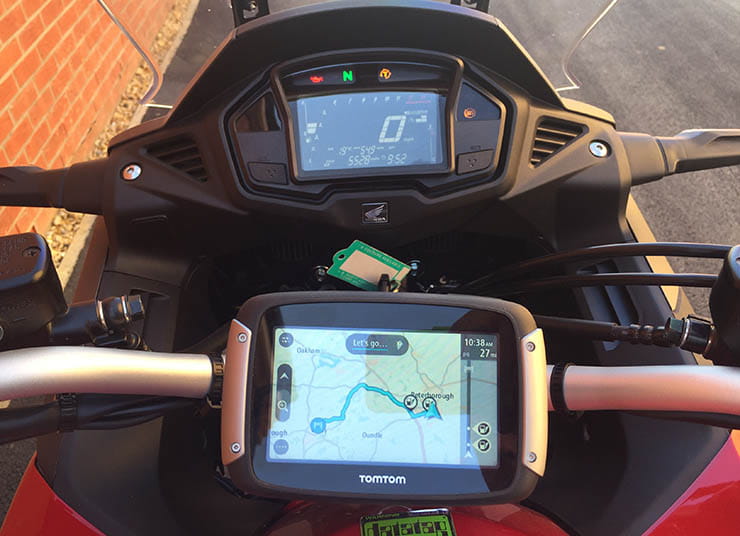 Bike nights, they’re great, a brilliant way to break up your working week if you are a wage slave, or a good excuse for a ride out if you are time rich. Poole Quay is one of the biggest in the UK. It’s held on a Tuesday evening during summer months and sat 180 odd miles from Peterborough. The Crossrunner comes with a few extras to help convince you to purchase one. It’s called the Rider Pack and includes a colour coded top box, a centre stand, Akrapovic silencer and a Tom Tom sat nav kit. With the BH15 postcode punched into the Tom Tom, I set off.

The Crossrunner lures you into wanting a long distance ride. Its riding position is pretty damn perfect, and the comfy saddle and wide bars compliment each other perfectly. It’s only when I got rolling I encountered my first snag. The saddle is adjustable by 20mm, so I’d assumed the screen would offer me the same luxury of adjusting it to make my progress less noisy, sadly not. There are a host of aftermarket screens out there at a guess, but it would have been pleasant if Honda had factored in some basic means to adjust the height of the screen. Over 50mph the wind noise drowns out any ‘music’ advantage that the Akrapovic exhaust silencer provided. I would happily live with a standard silencer and instead have Honda treat the Crossrunner to a better screen system, and maybe some handguards to aid the hot grips. Despite it being the end of summer I still used the standard equipment hot grips as it was a tad chilly when I set off, the wind chill nipping at the tops of my hands while the grips kept my palms toasty warm.

Like a school dinner, I like to get the bad bits out of the way first. Beyond the screen issues my only other real nit picking is left to silly things that blighted my enjoyment. The self cancelling indicators mostly didn’t work which not a biggy. Manually turning off indicators isn’t something I have an issue with doing, but on the Crossrunner this comes with added misery. Honda have switched the position of the indicator and horn buttons around. I lost count of how many times that I tooted people when all I wanted to do was switch my winkers off. In recent years the need to fit a gear indicator is another craze I can happily live without, which was handy because the Crossrunner's digital gear display had a habit of vanishing. The constant flashing on the clocks when this happened was aggravating.

The good stuff left on my plate far outweighed the Honda broccoli. The Crossrunner gives you plenty of meat and veg to enjoy. It isn’t the most powerful bike in its class, with a gnat's cock over 100bhp to use, it’s also not the lightest either, weighing in at 242 kilos. The bike doesn’t feel heavy though. The tall stance helps you move its mass around with ease, both when at stand still and on the move. The engine is identical to the that used in the VFR800, there’s been no retuning or detuning. The VTEC system works well, chiming in at around 7000 revs. Its drone was much more evident on the VFR800, but that screen noise drowns it out a bit on the Crossrunner.

The fuelling is spot on. I experienced no glitches in delivery, whether I was on the motorway or trundling along back streets and country lanes.

My ride to Poole Quay saw me head from Peterborough, out west towards Northampton, then south through Oxford and down the A34 towards the M3 at Winchester. Sidewinds do whip around the bodywork and I did feel like the front end got a bit upset by this. A few times I had to clench and correct the path of the Pirelli Scorpion tyre up front. I tried ducking behind the screen, but that just made me feel uncomfortable.

Suspension on the Crossrunner is adjustable and unlike some of its competitors it’s not armed with electronic adjustment, so it’s a case of old school approach if you want to fiddle with your preload. I didn’t feel any need to tinker with it, so left it be.

I had never used a sat nav on a bike before, either, I like getting lost too much, but seeing that the Crossrunner had one I gave it a try. I wouldn’t rush to use one again, but that's just me.

Hitting the M27 I joined the hoards heading for the coast. The riding position gave me a commanding view of the day trippers in front. I love the captain sensible approach and with blokes on sports bikes whizzing by me, I can honestly say I wouldn’t have swapped saddles with any of them. I arrived at Poole Quay having done just under 200 miles, but with zero aches or pains.

The tank range is decent. I pulled over 240 miles from the tank of fuel. Having come to Poole for bike night I was about four hours too early, so after 20 minutes I decided to sack it off and head back. Tuesday night is also my local bike night at Hartford Marina, Huntingdon. I worked out I could get there by 6pm. Heading away from Poole, the Honda called upon its fans to cool the engine. With another tank of fuel we headed back north, the Crossrunner giving me another comfy ride (screen issues aside).

I don’t just like this bike, I love it. It’s a proper Honda. Built well with some nice detail touches that don’t do anything to add to your riding pleasure but make you smile, knowing that they are there, like the deep paint that sparkles in the sunshine. The jacked up adventure bike suspension adds to the sumptuous feel of the ride while the multi spoke alloy wheels look fab, as does the Pro Arm single sided swinger. The Tokico radial brakes up front offer good braking, with the ABS doing its bit when required.

The legendary V4 engine propelled me back to Huntingdon and I made it to Hartford by 6.30pm. I was too early again! Having done a 425 mile round trip I clocked up another 20 odd miles and headed for home.

Doing over 400 miles in one day isn’t something I do often enough and the Crossrunner would happily do this and more. I have done a few more miles since, and other than those broccoli issues the Honda Crossrunner is one of the best bikes I’ve ever ridden in the real world.

I had to work on my mount and dismount technique, the mixture of the high perch and top box limiting my leg swing, I eventually got my technique sorted. The Crossrunner offered me a superb seat with the additional comfort from the top box to rest against, despite there being no back rest pad it was really comfy.

The pegs are in a good spot too. I would happily jump back on a Crossrunner without any hesitation. Loved it.

MPG. The digital display informed me I managed a 58mpg on my 420 ride.

Clockset. Bit too fussy for me.

Switchgear. Please put the horn button back on the bottom.