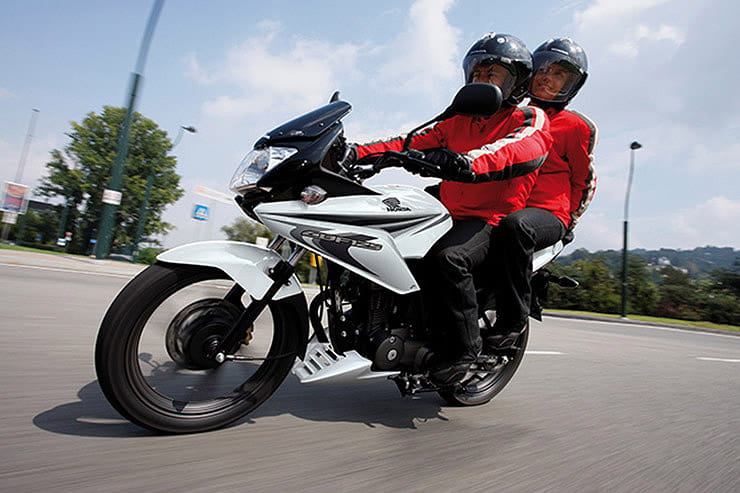 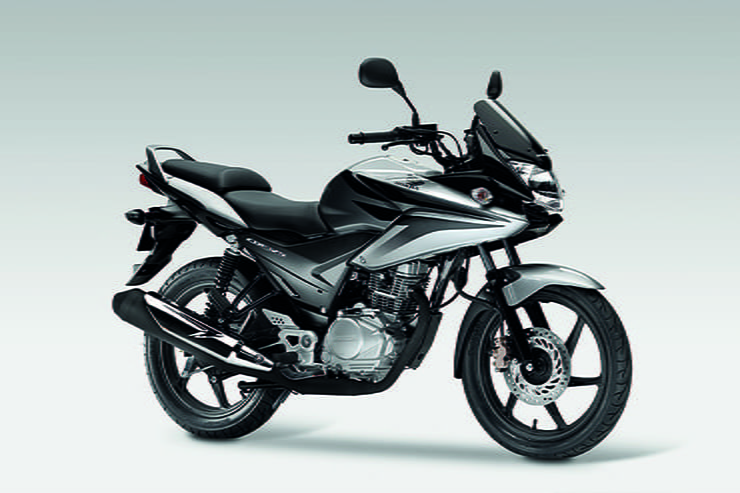 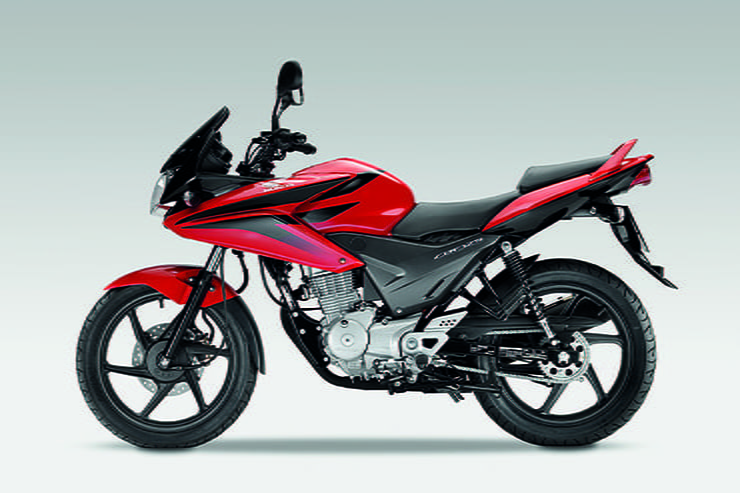 There have been a few bikes over the years in Honda’s range that have surpassed expectations in terms of sales. The most obvious example is Honda’s best-selling (and the world’s most produced motor vehicle) Cub but you also have to hand a lot of credit to the CG125. Debuted in 1975, the no-frills CG ran until 2008, bringing budget 125 transport to the masses. But eventually it had to be replaced and in 2009 Honda did just that with the CBF125 – a far sexier 125 that went on to replicate its predecessor’s impressive sales figures. Pretty much continually one of (if not the) best-selling bikes in Europe, the CBF125 is a hugely popular machine for those wanting basic transport in an urban environment. Although replaced by the CB125F in 2016, if you are after a solid urban hack, or even a great bike for your first steps on two-wheels, the CBF125 is the machine for you.

The CBF has always been a budget bike and with an RRP of just £2699 brand new, used examples are fairly bargain basement. As they are so cheap, you have a few routes when it comes to locating a used CBF. If you go to a dealer you can expect to pay between £1500 and £2800 with the top of this price bracket an unregistered brand new example, which oddly is quite common in dealers. If you want to save a few quid but take a chance, hitting the online auction sites reveals bikes for anything from £800 upwards with £1200 generally enough to secure a decent one. To be honest, considering what you are likely to be doing with it, a relatively low mileage (sub 10,000 miles) used CBF is a moderately safe buy if you are only paying £1200 so this is probably the best route.

You can’t expect too much from an air-cooled 125 and the CBF delivers a fairly underwhelming ride if you are lusting after performance. Its single plods along and can just about hit 70mph but it is fairly slow, even by 125 standards. This isn’t a machine to be competing with a water-cooled KTM 125 Duke or Yamaha YZF-R125 on, it is built with reliability and economy rather than speed in mind. 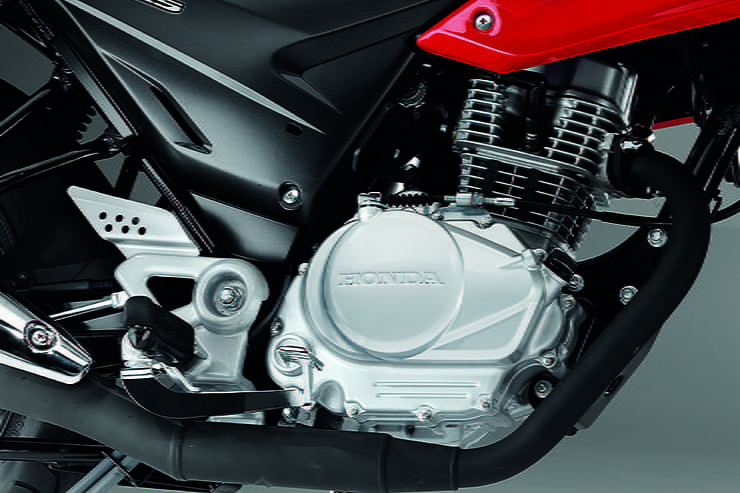 The CBF is a very budget-sensitive bike and as such its single cylinder motor is about as basic as it gets. While you do get fuel-injection, the rest of the air-cooled single is very low-spec and it only has a single overhead cam, two valves and a five-speed gearbox. But simple is no bad thing as it also often means reliability and that’s where the CBF wins the war. Aside from burning a bit of oil every now and then, the CBF is absolutely bullet-proof and considering the hammering it receives (often from cold...) it is remarkable that so few ever suffer major mechanical issues. If it starts up without any smoke, goes through the gears and ticks over nicely, you are pretty much ok with the CBF, it really is that basic. In theory it should be serviced every 2500 miles (every service includes a valve-clearance check) but there is very little chance this has happened so you need to ask the owner a few questions – such as when did they last service it or check the oil level! If the oil is changed regularly and the valve-clearances checked at least every four years all should be well. This is a bike designed for home maintenance and a full service kit (including a spark plugs and all 1.1 litres of oil...) is only £20, so it isn’t exactly expensive and is also very easy to do yourself, aside from the clearances. The issue is that with such small amounts of oil in the motor, should it burn any and not have its level checked you can run the risk of major internal damage, which is the worry. The CBF’s exhaust is steel and will rot through but as replacements are only about £40 and as long as the exhaust studs aren’t seized that’s no big drama. And if they are it’s not horrific news as access is very easy should you need to replace/re-tap them.

Honda claimed a tank range of ‘over 370 miles’ and economy figures that would touch 145mpg could be achieved with the CBF, which is simply staggering. The reality is closer to 110mpg and a range of just over 300 miles from the 13-litre tank, which is still pretty good. Pleasingly, you get a fuel gauge as standard, which is a bonus on such a budget bike. 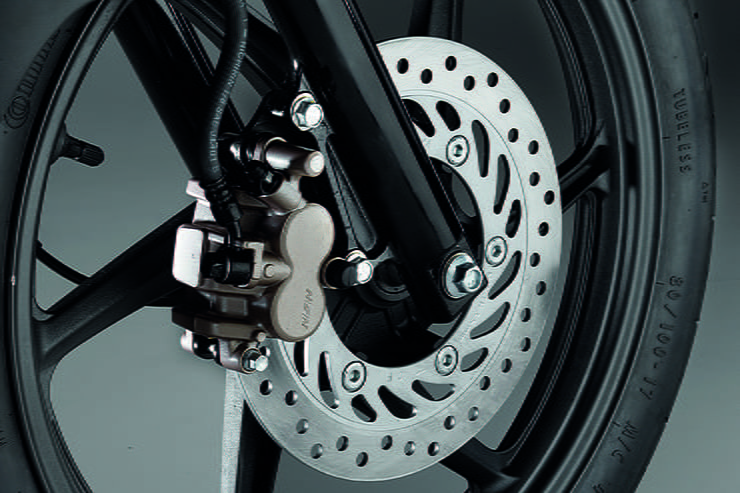 Again we are down to the budget nature of the CBF, so in terms of handling, the Honda isn’t a patch on a modern sporty 125. However what do you expect? This is a bike designed for urban use and its steel chassis and basic suspension are perfectly adequate for its targeted role in life. You can alter the shocks’ preload if you are a bit on the heavy side but that’s it and you really don’t need much more when it comes to commuting through heavy traffic. As the CBF is so light and has a lovely low seat height, this is a bike perfectly suited to nipping through gaps or being man-handled into a parking space and that’s what it was always designed to be. If you are new to two-wheels, this lightness is a major plus point and makes the CBF really reassuring at low speed and also easy to pick up should the worst happen. Which is something you need to look out for. A lot (every...) CBF has hit the deck and that means crash damage is a big worry. Look for bent bars, scuffed bar ends, dents in the exhaust’s cover, all the usual signs of a slow speed tip-off. Unlike on bigger capacity bikes, the suspension isn’t a huge drama (unless the forks are bent!) as a fork refresh is less than £100 and two new shocks are just £20 (used) so that not a massive outlay. Even a chain and sprocket kit is only £25. Talk about cheap motoring... If it has a recent MOT and looks straight, you should be ok. 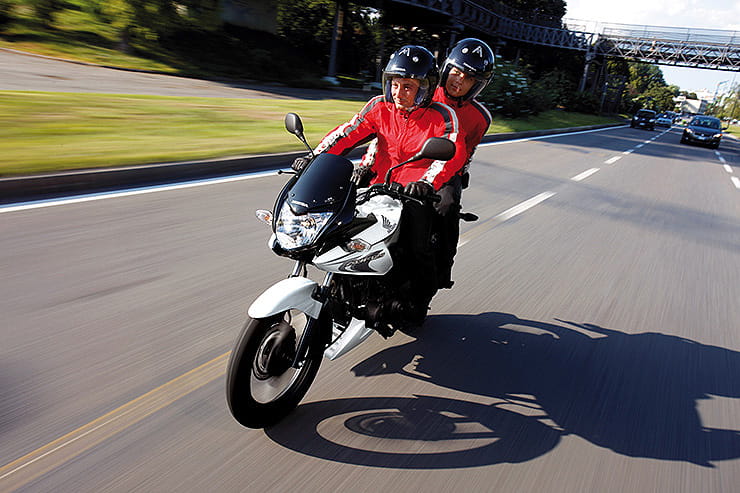 Touring isn’t really something that CBF owners do but for short hops the Honda is fairly comfortable. You get a small screen as standard and a bit of a front fairing alongside a nice and upright riding position, which is all you can ask for. And let’s be honest, 65mph wind flow isn’t going to rip your head off your shoulders...

The CBF has no rider assists aside from a fuel gauge and in terms of accessories, owners generally just stick with thing to keep it running such as crash protection, maybe a taller screen and the occasional top box. Oh, and an L-plate or two!

There is a reason the CBF125 has been such a huge seller for Honda – it carries a known name on its tank, delivers in terms of frugal motoring and is exceptionally reliable. If you find a good one, this bike will run and run and cost you virtually nothing aside from a bit of fuel and oil every now and then. What more can you ask for?

Three things we love about the CB125F… 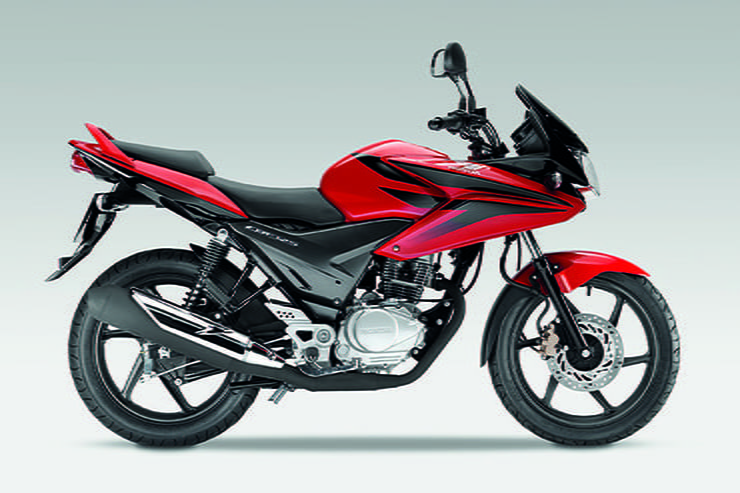