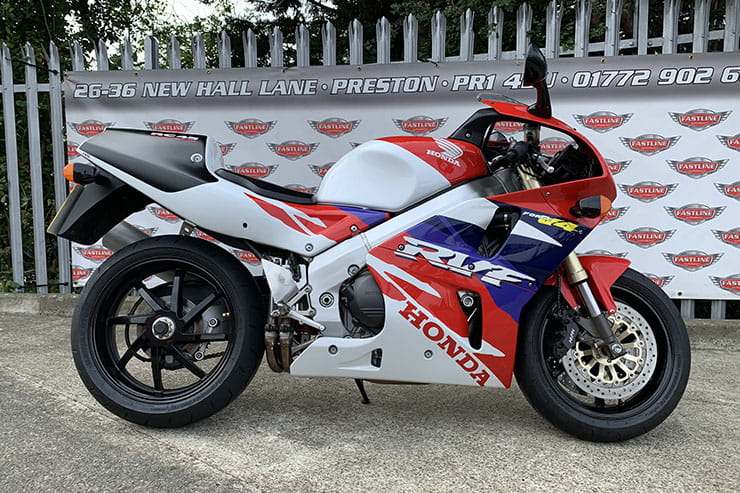 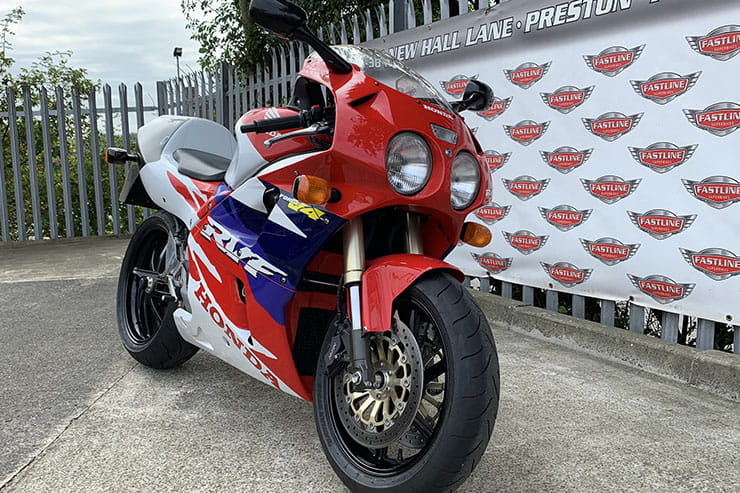 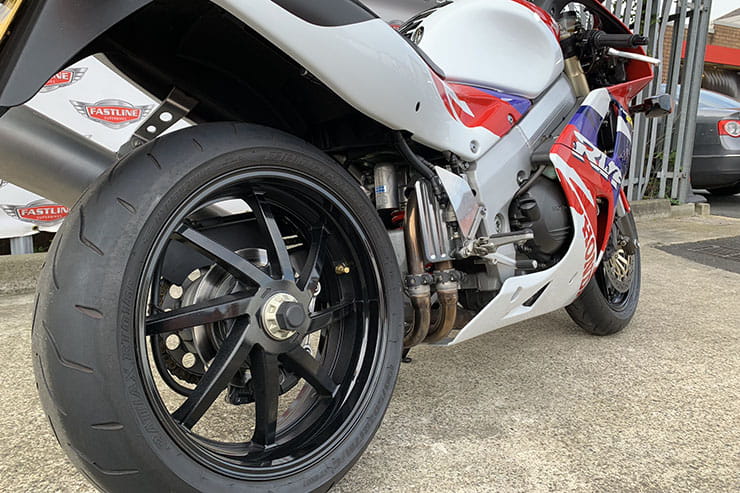 Let’s be honest, with a price tag around the £35k mark for a half-decent example, the chances of many of us ever throwing a leg over the glorious Honda RC45 are remote. However lucky lottery numbers do occasionally come up so if they do, here is all you need to know about the bike that remains one of the real jewels in Honda’s WSB homologation specials crown.

Released in 1994, the RVF750 RC45 (to give it its full name) took over from the VFR750R RC30 (to give it its full name...) as Honda’s homologation special. Designed with one purpose in life, the RC45 was Honda’s WSB, Endurance and road racing weapon and the bike they hoped would further demonstrate their belief the V4 was the perfect engine configuration by knocking that pesky Ducati V-twin off its perch. Yeah, we all know how that ended...

Never that successful on track (aside from at the Isle of Man) the RC45 was also a flop in the showrooms and for many years was looked down upon by riders. Nowadays, the RC45 is rightly being seen as the beautiful and exotic swansong of Honda’s V4 homologation specials and a perfect example of WSB’s heydays when budgets were blown and HRC got properly involved in designing road bikes.

In 1994 Honda slapped a £17,780 price tag on the RC45, which to put into context was twice the price of a FireBlade – and the Blade was faster and more powerful... While the RC45’s predecessor, the RC30, managed to justify its inflated tag through unprecedented track success, this wasn’t the case for the RC45. Times had changed and unlike the RC30 you couldn’t just rock up, buy an RC45 and expect to win a championship. Oh no, not by a long shot as the official HRC effort in WSB was (sadly) demonstrating. Despite its HRC badges and exotic technology, sales were slow, dealers were forced to discount and by the time the RC45 went off sale in 1999 (actual production stopped way earlier...) they could be had for under £14,000. Partly due to this lack of success and partly as they were so costly to build, Honda actually only made a handful of RC45 with (it is believed...) just 578 ever made. And believe it or not there were two versions – the RC45R and RC45S – but more on these later.

Nowadays the RC45 has thoroughly hit ‘collector status’ and its prices have soared. A good one will cost you between £30,000 and £40,000 with value determined by mileage and condition. Not to mention originality, naturally...

The RC45 isn’t a very fast motorcycle by today’s standard and in truth it wasn’t that quick in 1994 either! Well, not in standard road trim. Making a claimed 115.8bhp from its 749cc engine it was left well behind the 1994 FireBlade’s claimed 122bhp and even the RC45’s 56ft.lb of torque was less than the Blade’s 65ft.lbs – but figures don’t tell the whole story. When you ride an RC45 it isn’t about peak power, it is about the sound and feel that V4 motor delivers. Smooth as they come (aside from the fuel-injection being a bit jerky) the V4 engine’s torque curve is almost perfectly flat, releasing lovely mid-range drive to go with that glorious exhaust note. Flat-out you may be able to see 160mph but no RC45 owner will ever test this, instead they will enjoy it on the (dry, summer) roads, which it feels perfectly suited to and rewards you with a feeling of being on something very special indeed. Which you are.

The RC45 may have the same V4 design as the RC30 but it is a very different motor – which was part of the issue it had on the race track. If you want to be all geeky, the reason the RC45 failed was mainly down to the fact its cams run directly in the head and not on needle bearings and ball-races and in cam carriers as on the RC30. Why does this matter? If you want to up compression to gain power you need to skim the head but with gear driven cams there is only so much you can take off before the cam gears won’t work (with a cam chain you just take up the slack) and where on the RC30 you could shim the cam carriers to make room, on the RC45 you were stuffed. But enough about the bad, onto the good...

Talking technology, the RC45’s engine has titanium con rods, short skirt pistons, a close ratio gearbox (more on this later...) and a beautiful 360-degree firing order, which is why it sounds so good. Very different to the RC30, the RC45 is an oversquare ‘short stroke/big-bore’ engine with 2mm wider bores that are 2.6mm shorter than the RC30’s. It also came with fuel-injection where the RC30 ran carbs – and no, it wasn’t the first Honda sportsbike to have this system, the NR750 arrived with fuel-injection in 1992. So what do you need to know when buying a used RC45 in terms of its engine?

The great news for buyers of the RC45 is that due to the fact it wasn’t really raced with any success, nearly every bike for sale is a pure road bike and that means lovely reliability. All the experts agree that the RC45 is absolutely bulletproof in terms of its motor so there is little to worry about if it has been serviced regularly. The issues come from the parts bolted to the engine, namely the fuel injectors and the fuel pump. As so many RC45s stand around doing nothing aside from looking pretty, fuel pumps fail and injectors become blocked, which can be a real pain as you need to pull a fair amount of the bike apart to gain access to the injectors and then get them professionally unblocked. Some would say (remembering reviews back in the day...) the clutch is also a weak point due to the incredibly tall first gear – but when you ride a modern sportsbike it doesn’t feel that tall geared in comparison and in reality this isn’t an issue. Watch out for a dodgy voltage regulator/rectifier unit (an all-too common 1990s Honda problem) as if it goes it can melt the seat unit, which is very costly to replace. Keeping the battery fully charged helps reduce this risk. Naturally, when it comes to the exhaust you want the standard item for originality in a box and a nice loud one fitted for aural pleasure... 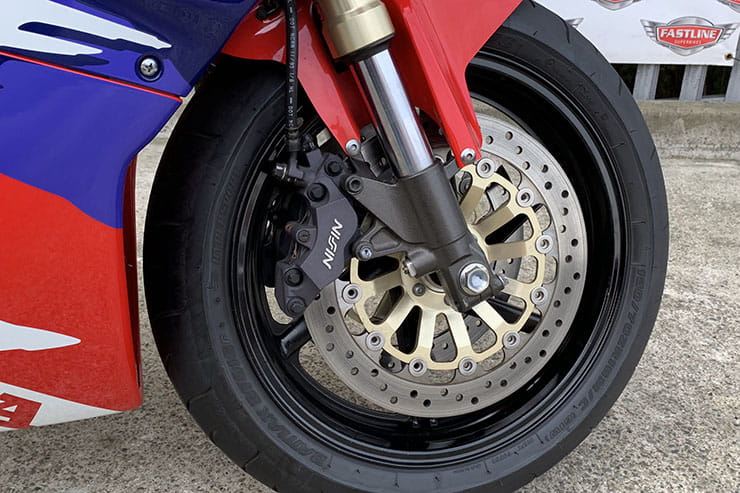 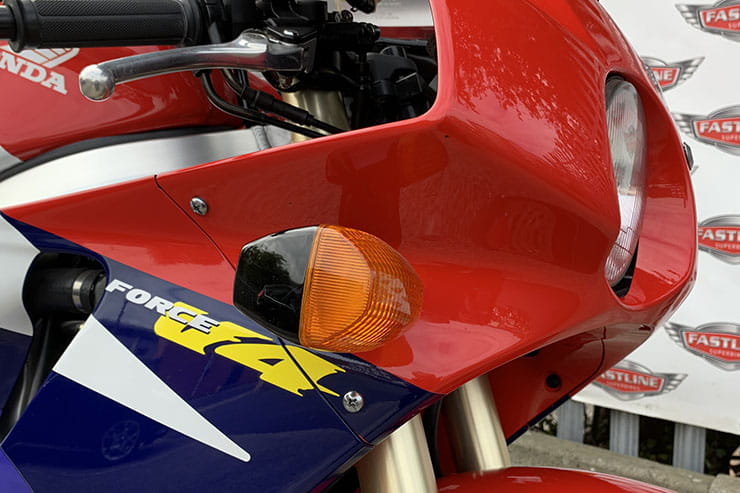 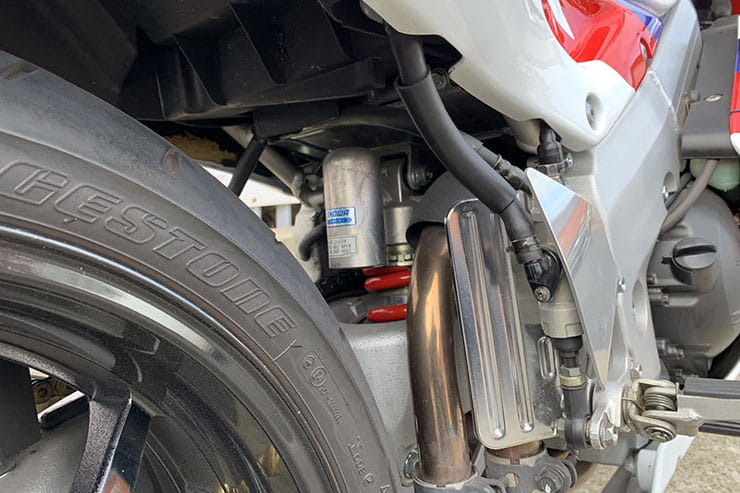 You are riding a bike that costs over £30k, is fuel economy really a consideration? If you care about these things then you should see roughly 30mpg. The RC45 has Honda’s standard 4000-mile service intervals with the valve-clearance check at 16,000 miles.

The RC45 has the same 16-inch front wheel as the 1992-99 FireBlade, which is starting to be a bit of a limiting factor when it comes to tyre choice (but nothing like the challenge of finding tyres for an RC30). A lot of owners stick a VFR750’s 17-inch wheel in to allow them to use modern rubber, so if you are buying used, always check the wheel to see if it is original and correct or a VFR unit. That said, it is literally the same 16-inch wheel as the Blade (the switchgear is also identical) so getting a replacement is simple.

Now let’s talk about the RC45R and RC45S – which still cause a bit of a debate in the RC45 community. Records show that there are two frame designs for the RC45 with the R the most common and the S far rarer. Apparently the S’s frame has the engine moved 7mm further forward than the R version. Do buyers care? Not really, you would have to be an ultra-geek to spot the S’s different airbox lid and rear rocker cover.

On the road there is no denying the RC45 feels a bit ‘1990s’ in its handling. Not the fastest turning bike it sits quite flat and feels a touch sluggish to respond. Like the 916 the RC45 is more stable than agile but is this a problem for road riders? Not at all, it is reassuring – which is what you want on a bike costing so much.

As the belief was that race teams would just junk them, Honda didn’t bother pushing the boat out with the RC45’s brakes and the four-piston Nissin calipers are a similar fit to many other bikes. The RC45 had rubber lines as standard, which should probably be replaced by now on safety grounds, but that’s the only concern and the stoppers deliver more than enough performance for road riding. 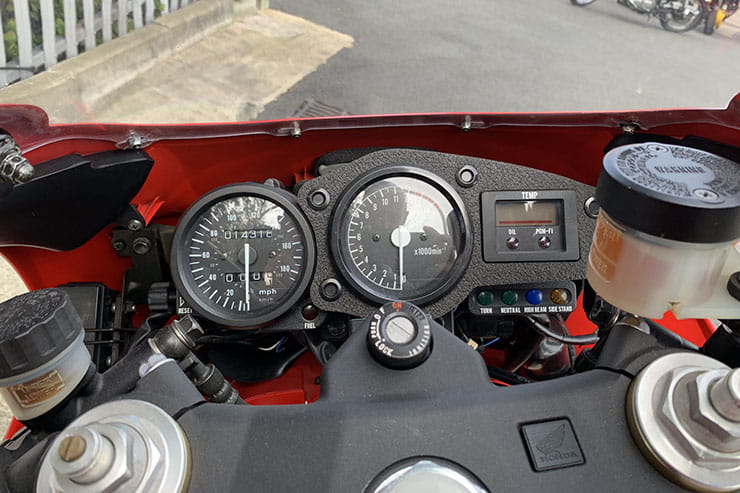 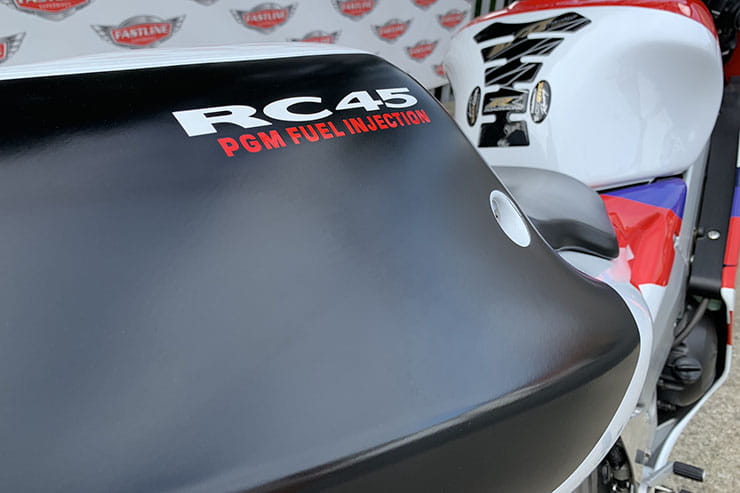 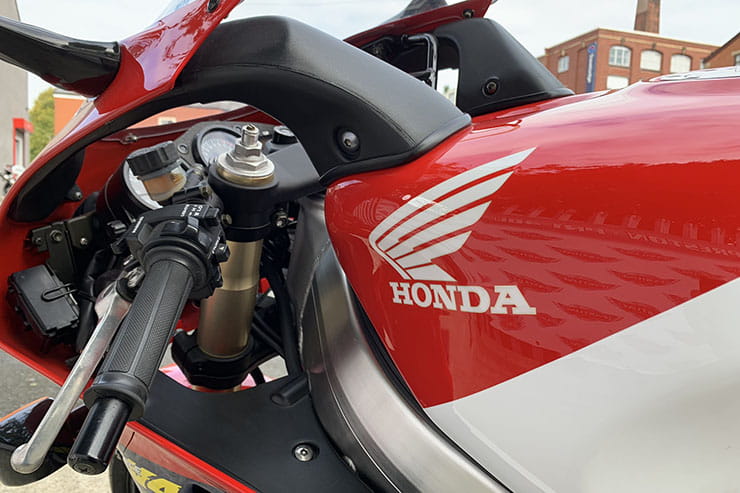 The riding position is compact, but not as uncomfortable as a FireBlade or Ducati’s 916. Few get ridden on big trips, but we know one advanced riding trainer who did 45,000 miles on and RC45 in two years back in the late 90s and loved it. Like most V4s the rear cylinders and exhaust warm your legs and backside, but the RC45 doesn’t overheat in traffic as readily as the RC30 did. and its mirrors even work really well but that doesn’t make it a tourer! This is a WSB homologation special and is best kept for short rides, not long hauls.

No, in the 1990s there was no such thing as rider assists and the RC45 has fuel-injection (which needs balancing properly to get the best from it) and that’s it in terms of technology, it doesn’t even have a fuel gauge – although it does have a choke lever and side sand warning light! Realistically, if you are talking accessories then aside from the 17-inch front wheel it is an exhaust system, taller screen and that’s about it. Well, unless you go down the tuning route...

A few RC45 have been tweaked and that’s when you see 17-inch Dymag wheels, a ‘Tony Scott’ (legendary race tuner and Honda V-four specialist) tuned, or blueprinted motor, Öhlins suspension, Brembo brakes and even a smattering of HRC parts here and there. Tony Scott sadly passed away a few years back so it’s harder to check if the tuned motor is actually one of his. Without paperwork or being able to see physical evidence (he often engraved his initials and a date on the engine) be wary of any claims.  If you are talking a road bike and an investment, buy an original one and keep it that way.

The RC45 is a simply stunning motorcycle that while in terms of track success didn’t quite hit the mark (it did win one WSB title remember and took 34 race wins, which isn’t too shabby), to ride feels amazingly special. Does it feel £35,000 special? Well, it is rarer than the RC30, better built and nicer to ride, so arguably yes it does. It’s a proper ‘dream garage’ machine.

Three things we love about the RC45… 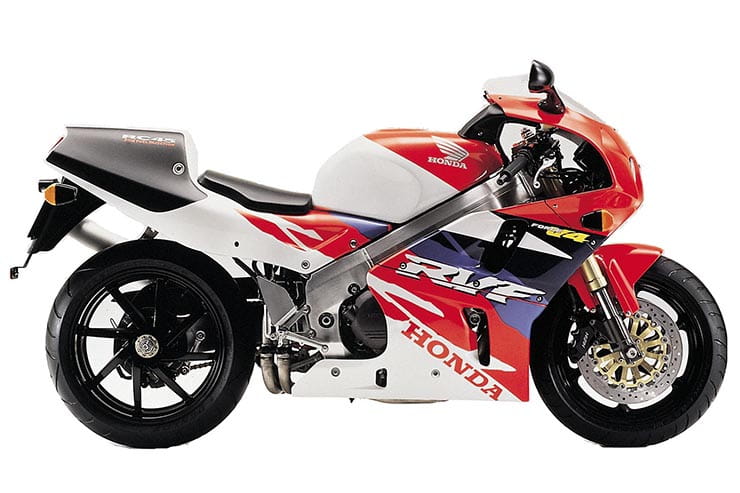 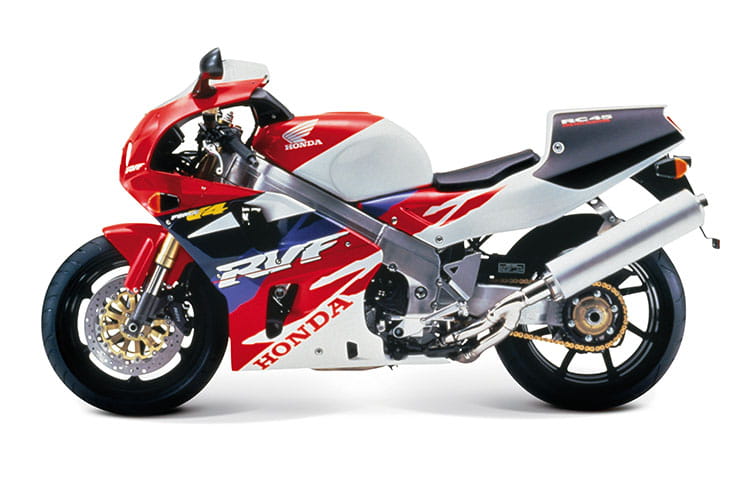