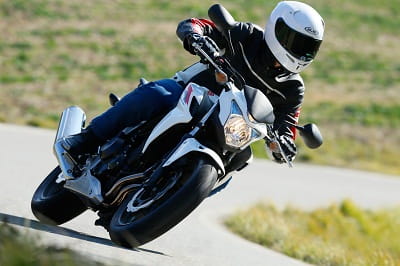 If ever a bike has been launched with perfect timing, it’s the CB500F. This parallel twin produces 47bhp, bang on the new A2 licence limit. And it’s one of Honda’s first biggish bikes to be built in Thailand, which allows them to keep the price down to £4650. Getting a half-litre Honda and a chunk of change from five grand sounds like a decent deal at any time, let alone in cash-conscious 2013.

Especially when it’s as good a bike as this one. There’s nothing fancy about the CB500F (which shares most parts with the faired CBR500R and adventure styled CB500X). It’s a simple naked bike with a 471cc parallel twin engine and a tubular steel frame. It’s intended as a step up for inexperienced riders, a painless step down from bigger bikes, and a competitively priced commuter to tempt motorists out of their cars.

The CB-F might be inexpensive but it hides that very well. There’s more than a hint of CB1000R about its look. Fit and finish (in white, black or red) is good; the instrument panel includes a fuel gauge and consumption reading alongside the digital speedo and analogue tacho. It’s slim, reasonably light at 192kg, and has a low seat that should make it manageable for just about anyone. 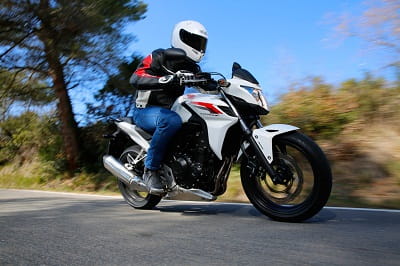 Performance won’t pull your arms off but there’s plenty of fun to be had. The balancer shaft equipped motor is lively and likes to be revved. The Honda rumbles along happily at an indicated 80mph — with more to come, though that’s as fast as you’d want to maintain the wind-blown riding position for long. There’s torque throughout the range although if you’re in top at 50mph and want to overtake with any urgency you’ll need a couple of taps down through the smooth shifting six-speed box.

Handling’s more than adequate too, combining light and neutral steering with enough stability to keep nervous novices happy. The Metzeler tyres grip well enough, despite being slim. And with an ABS-equipped disc at each end, braking is light years ahead of anything available at this price point a few years ago.

In fact you could probably say the same thing about the CB500F as a whole. If what you want from motorcycling is a lively, reasonably practical middleweight for minimal money — and backed up by the Honda name — it’s got to be a serious contender. 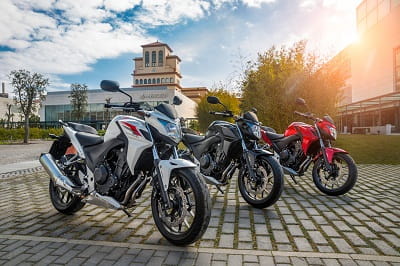