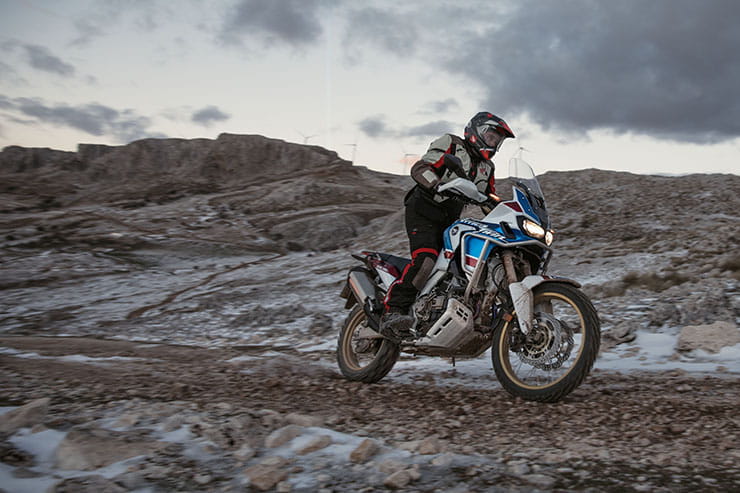 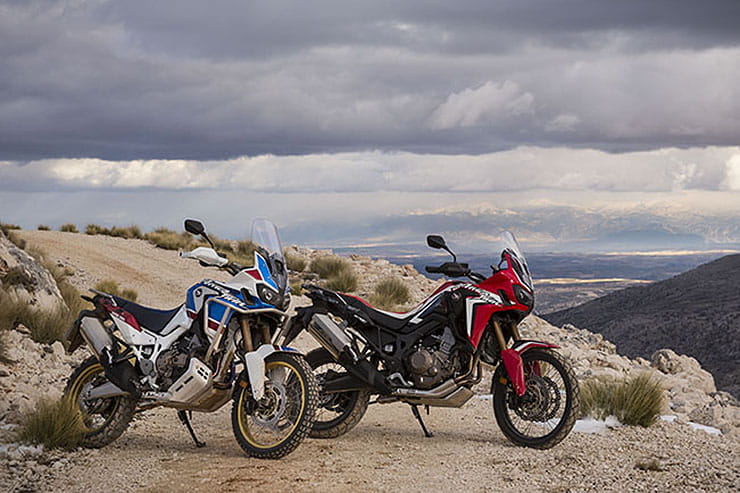 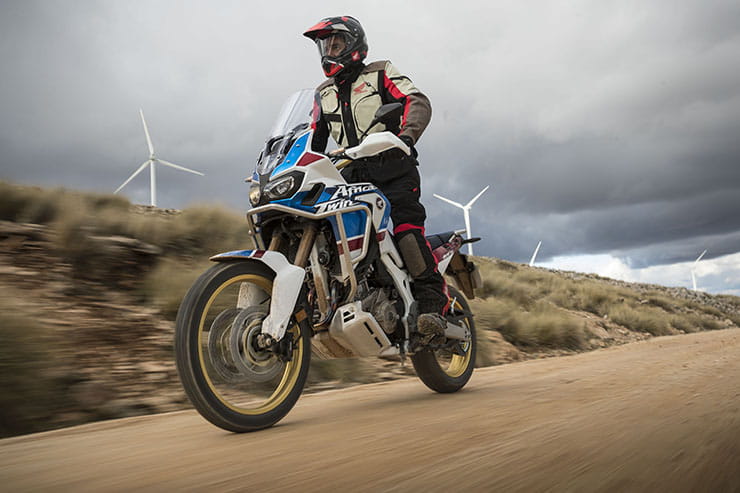 The Adventure Sports arrived in 2018 as Honda updated their Africa Twin model for the first time. Claimed by Honda to be the ‘definitive full-size adventure bike’ it uses the same chassis and engine base as the standard Africa Twin but adds a larger 24.2 litre fuel tank, longer travel suspension and a few extra creature comforts such as a taller screen, heated grips and wider fairing to make it better equipped to churn out the miles – whatever the terrain. As with the Africa Twin, it was far from perfect and lacked a few of the gizmos that rivals such as the BMW GSA or KTM Super Adventure S came with but it still sold well. Although this could have been down to Honda’s pricing strategy...

A major blot on the Africa Twin’s copybook has always been its price tag, or more precisely Honda’s willingness to undercut its RRP through various deals when a new model is on the horizon or when sales are slow. While usually this happens fairly irregularly by a manufacturer, with the Africa Twin being substantially updated every two years it is very noticeable on this specific Honda model, which really harms used values. Initially, Honda asked for £12,599 for the Adv Sports (£13,549 with DCT), which was £2000 more than the base model, however very quickly you could pick one up for £11,500 and by the time the 2020 model was announced this had dropped even further. Nowadays prices for a used Adv Sports start at £9000 in a dealership with private bikes going for £8000 if they have covered over 10,000 miles. Shop around and you can get a 2019 model for less than £10,000 with minimal miles and even a brand new pre-reg or minimal miles demo one for £11,000 - £11,500 – and it will probably have luggage included to sweeten the deal! Considering prices for a 2020 Adventure Sports start at £14,649 (there has already been a £1000 money off deal) that’s not bad going.

This generation of Twin has the ‘older’ 998cc engine, which is a motor that while perfectly effective it has to be said isn’t the most thrilling of engines. Producing a somewhat paltry-sounding 95bhp with 75lb-ft of torque it isn’t a bad engine, it just lacks the kind of oomph you get with the GS (even before ShiftCam arrived). On the go the throttle responsive is nice and smooth with a decent mid-range, however if you want to get a shift on you need to work the parallel twin quite hard. In some ways this makes the Twin quite thrilling to ride as it is more involving than a lazy slow-revving Boxer but in others it does make you wish Honda had packed more grunt into it.

In the 2018 update Honda added a ride-by-wire throttle to the Africa Twin, which enabled them to incorporate four rider modes (Tour, Urban, Gravel and a user-defined one). The motor (which is actually a single overhead cam design, not a twin one) was also tweaked with a lighter balancer shaft and a new airbox and exhaust that was claimed to boost mid-range. As you would expect DCT was an option, one that according to Honda 45% of buyers actually opt for over a conventional gearbox, quite why is a mystery as it is fairly poor in its gear selection on this generation due to it lacking any angle-sensitivity. In terms of reliability the engine is not only very strong, it is also fairly cheap to run with 8000-mile service intervals and the valve clearances needing checking at 16,000 miles, which is about £400 compared to £200 for an interim service. A few owners grumble about the exhaust as its downpipes can look a right old state after a very short period of time but they don’t tend to rust through. A quickshifter (only up the gears) was an optional extra and the gearbox handles it well with no reported cases of damage. The first generation model’s cold start issues also appear to have been banished. 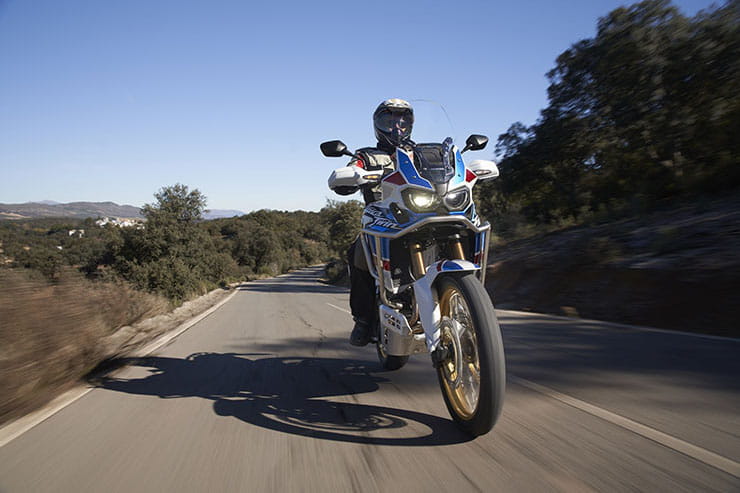 The Twin isn’t bad in terms of economy and although Honda claim a tank range of ‘over 500km (310 miles)’ the reality is a little different. In general riding expect 45mpg with cruising upping this to the low 50mpg figures. With a 24.2 litre tank, you are looking at a realistic 250-270 mile range, which isn’t bad at all.

There are a few things to be aware of when buying an Africa Twin Adventure Sports in terms of its handing. For a start the Twin comes with a 21-inch front wheel and longer travel suspension than the stock model (which has the same-sized front wheel). Designed to assist it in rough terrain, this 21-inch wheel can feel a little lacking in grip (many rivals have a 19-inch item with a fatter tyre) while the suspension makes the bike quite prone to a wallowy ride, especially two-up with luggage as the shock is set very softly. Also, irritatingly, the Sports has tubed tyres (the 2020 model is tubeless) which tourers don’t like as punctures can’t be easily plugged and the seat height is a very tall 900/920mm (this was lowered in the 2020 update), which means low speed tip-offs are common. This all taken into consideration, the Twin does handle quite well if you don’t mind a bit of pitching on the brakes and you can hustle along on it. At slow speed it can be a bit on the top-heavy side but this feeling soon goes when the pace ups. When buying used, always check the front frame rail as it sits directly behind the front wheel and gets stone chips, leading to rust spots where the paint is missing. Also, and this is a common Africa Twin issue, check the spokes very well for rust as despite the fact they were updated on this model, they still corrode badly where the spokes meet the rims.

Although the twin has ABS, angle-sensitivity only arrived in the 2020 update. Although not the strongest of stoppers, they are effective enough for a bike with long-travel suspension and a skinny front tyre. Be aware that Honda recommend the fluid is swapped every two years, which is a job best done by a professional as properly bleeding and flushing out the ABS system can be quite tricky and time-consuming. 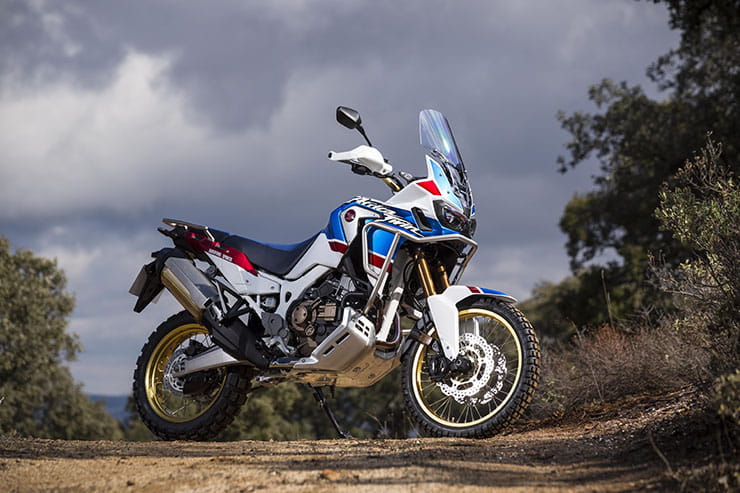 The Adventure Sports model adds quite a few creature comforts that the base model lacks to improve its long-distance ability. You get heated grips and a 12V socket as standard while the fairing is extended to offer greater protection, the screen 80mm higher (but still non-adjustable), the bars are 32.5mm higher and pulled back 5mm and you get crash protection. While this is all very well and good, the seat itself isn’t the most sumptuous and the Twin lacks cruise control, which drives a few owners wild. You can actually add an aftermarket system (MC Cruise make one) but that will cost you over £600 including fitment. Overall, the Adv Sport isn’t a bad mile-muncher but you really do need to add a comfort seat and possibly even a taller screen if you want to smash out the big distances.

The Twin gets a bad reputation as it does lack a few gizmos (there is no IMU on this model or cruise control) but that said it does have quite an array of electronics. You get ABS, traction control (HSTC) with 7-levels, three engine power and braking levels and four user modes. There are also off-road options to disengage the HSTC and ABS as well as the option of Honda’s DCT gearbox. The LCD dash, however, is hard to read as it reflects very badly (despite its visor) and very dated while there is no option of adding semi-active suspension. Honda offer the usual array of accessories for the twin with plastic and metal luggage options (you can get them key-coded to match the ignition key) as well as fog lights, a centre stand (why isn’t this standard?) and an alarm. When buying used, aim for a bike with panniers fitted as they were often included in the deal to tempt buyers and therefore cost far less to get on the bike than buy afterwards.

The Africa Twin isn’t as good or as refined as the class-defining BMW R1250GS Adventure, however it is cheaper and also offers a different riding experience. The parallel twin is quite an engaging motor to use as it responds to being worked and has a lovely smooth throttle connection, which is good for two-up touring. And then there is the price. Compared to a GS, the Honda is a bit of a bargain. It is a saving worth making? That’s debatable as a GSA is without question a better machine – however it is also a bit common and many riders just don’t want to own one as a result, making the Africa Twin Adventure Sports the next best option.

Three things we love about the Honda CRF000L Africa Twin… 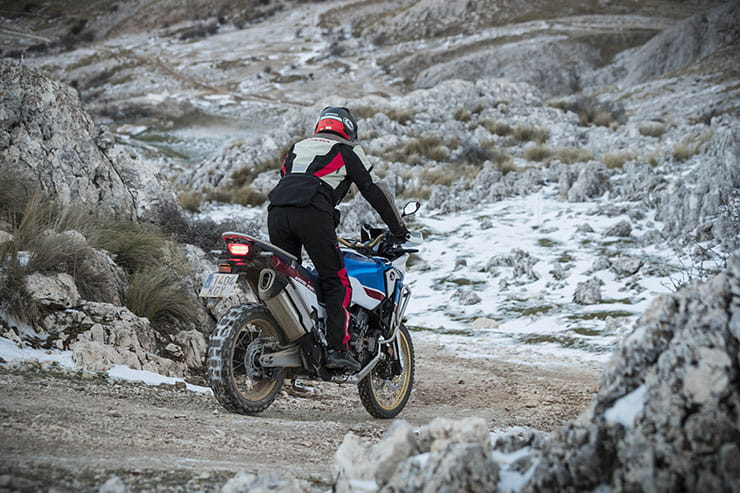