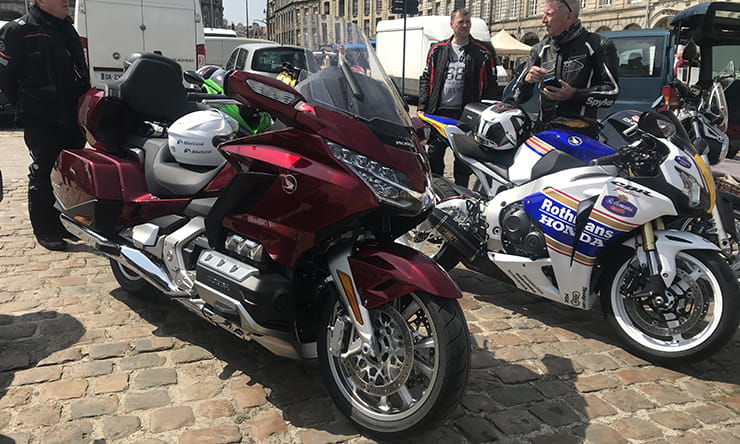 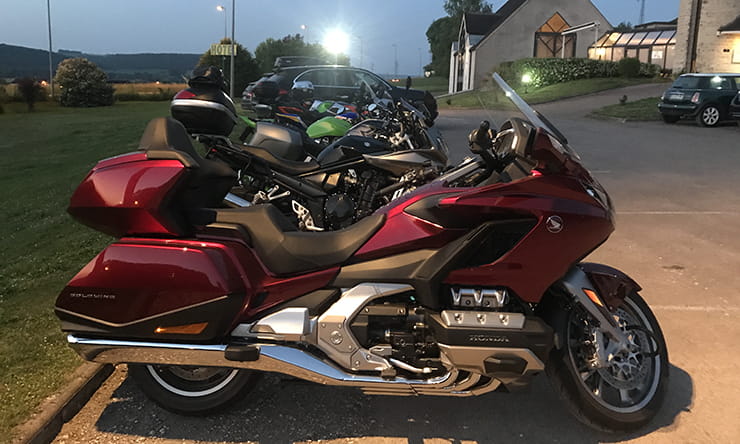 Let’s get one thing out of the way…

A Gold Wing is not a two wheeled car. That cliché was wrong in 1975 when some desperate-to-be-cool journo coined it and it’s been wrong ever since.

The latest Wing is like having your own luxury yacht or private jet that just happens to work on tarmac. How does 100mph with the screen up, your visor still up and still being able to hear your iPod sound?  It’s like every other motorcycle...with an upgrade to business class and it does this because, first and foremost it works bloody well as a motorcycle.

This latest version is so well balanced, so easy to ride and so effective at making light of single-track unclassified hairpins or deserted French motorways that 99% of the time you forget it’s a Gold Wing. And when it does pop into your head, making a U turn on a gradient more suited to launching rockets, a hill start round a 90-degree turn, or half way through an overtake, you forgive it because while it might have as much power as an early Fireblade at half the revs from twice the engine capacity, it also weighs twice as much.

The rest of the time, you just ride it. Solo, two up, full laden, it doesn’t matter. The all new motor might share the capacity of its dad, but is a totally different lump that revs faster, fuels better and pulls strongly from the moment you release the clutch till it bangs off the limiter just 6000rpm later. 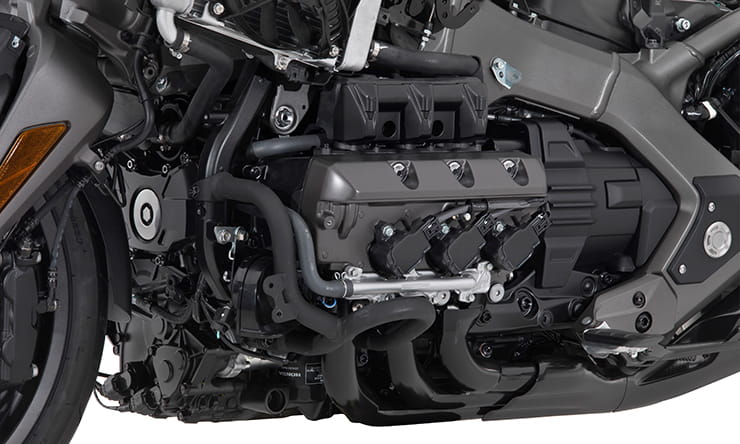 Same capacity as before but it now has four valves per cylinder, sophisticated fuel injection and all- new, lighter- but-stronger internals. So, it revs faster and makes 10bhp more (in a package weighing 38kg less) but is still as torquey and flexible as ever. The real progress is in the electronics. When the last Wing was launched Honda had been doing mainstream fuel injection for just three years and hadn’t quite got the hang of it yet. These days, their systems are seamless, and the new Wing has four useful, usable riding modes that make a real difference.

‘Tour’ is the obvious one and the one you stay in most. The linear throttle response suits the bike, the suspension settings are also softened a little, but there’s still a huge amount of control in most corners.

Switching to ‘Sport’ seems a little daft, but you feel the throttle sharpen and the suspension become more responsive. In this mode you can keep up with many quicker, lighter and more manly things on fast, sweeping A-roads. If real cruise liners were this much fun Saga would have a customer base of goatee-sporting Californians.

HMS Gold Wing also has an ‘Econ’ mode and Rain too, but we used them briefly and, er, got bored. Sorry. Fuel consumption in normal touring mode started off at around 45mpg with a still-tight engine showing just 350 miles. With another 1000 miles on the bores, that improved dramatically, to around 55mpg, which is impressive for something weighing 381kg and the aerodynamics of a pub piano. Average mpg for the whole trip – a mix of high-speed motorway naughtiness and daft-grinned sporty scratching, with a little gentle touring thrown in too was an astonishing 51mpg. Think about that for a while if you own any large capacity sports tourer or adventure bike and weep. 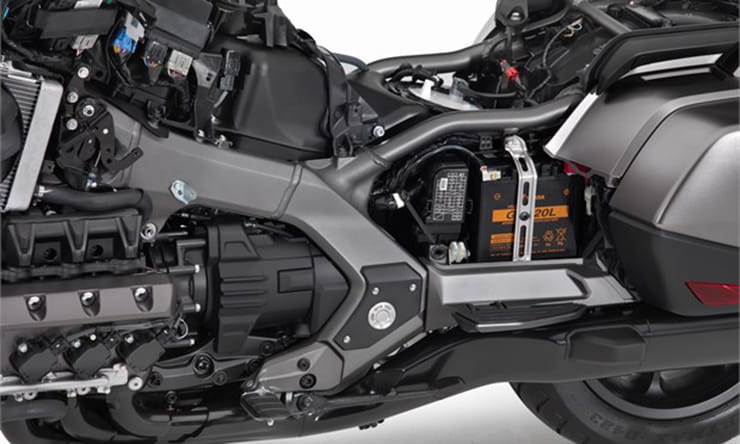 There are two transmission options. On the launch I rode the DCT semi-automatic one most. In theory DCT works well on a bike like this and Honda’s latest version is very good. But on the DCT bike the gear changing is linked to the throttle maps and suspension settings meaning in Tour mode you get the gentle throttle and soft suspension, which is good, but a gearbox that gets into top far too quickly and stays there too long, which is not. On the manual bike the modes control the fuelling and suspension, but I control the gearchange and that works particularly well. The clutch is light and gearchange very slick, although the lever is set a little low, meaning you have to hook your foot underneath it. 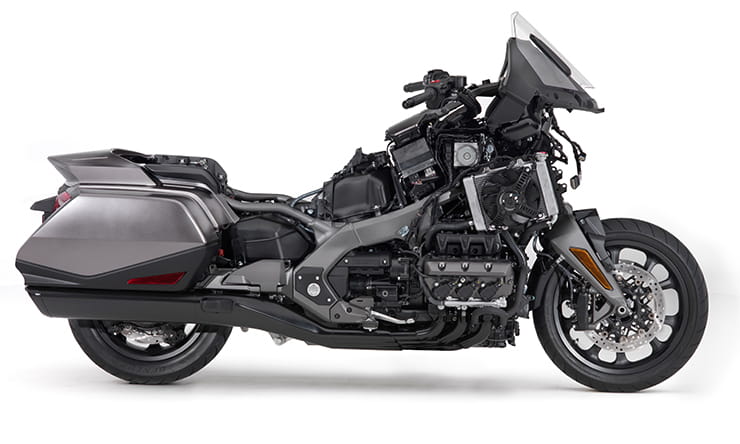 The new bike is shorter, narrower and considerably lighter than before so it was always going to handle better. But more importantly, it has a linkage type front suspension system, similar to the latest BMW K-series tourers which means you get excellent road holding in corners and ride quality too without needing a compromised soft set of telescopic forks that crash to earth every time you hit the brakes and bounce back up like a jack in the box when you let go of the lever.

The weird bit is watching the tops of the fork blades bouncing up and down in front of you and the apparent flimsiness of the steering linkage. But it’s somewhere deep into your newly-discovered favourite French back road, when you still have the fast-riding bloke on the ZZ-R1400 in sight, on a bike weighing over 50% more than his – and carrying half your sock drawer – that you realise just how good it is.

Making the chassis shorter and fitting the new front suspension, combined with the electric screen, allowed Honda to move the riding position further forward, which also improves feedback, partly because the handlebars are about a foot shorter either side too. 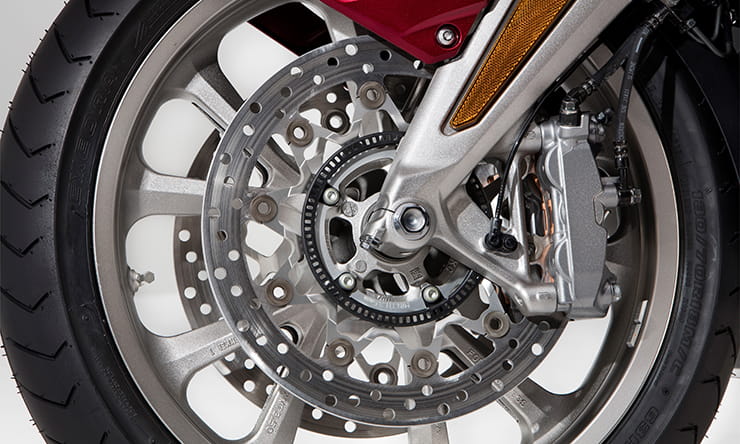 The brakes are superb, and the new front suspension lets you use them very effectively. As ever when driving a super tanker, it’s the very slow speed stuff that gets a bit hairy. The new Wing is beautifully balanced right down to walking pace and it’s only when reversing (the manual bike’s reverse gear is connected to the starter motor, the DCT version has a proper reverse gear) over a tricky camber change or doing a hill start at a junction that you remember how big it is. That’s the one per-cent when you remember; it’s a Wing 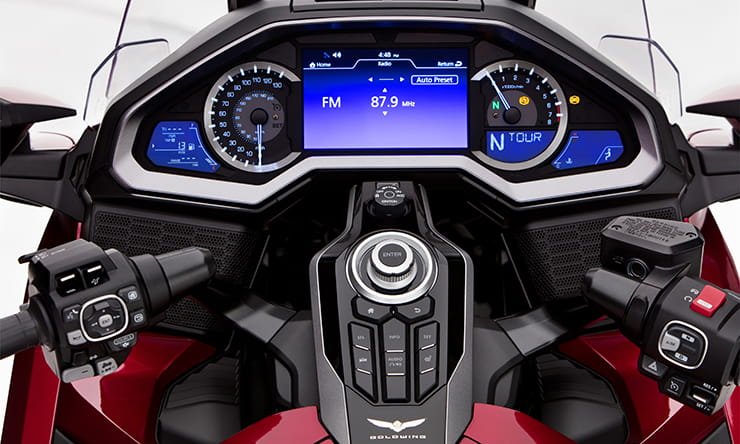 The toys are good and bad. Heated seats and grips are very good. Riding modes are excellent. Much of the switchgear is intuitive to use and the electric screen is superb. I did almost 2100 miles in six days, mostly between 50-70mph and didn’t have my visor down once, even when riding at, err, significant speeds trying to catch the rest of the pack after a fluffed toll booth exit.

Sat nav is good once you suss it, but far from intuitive and not as good as anything currently available from Tom Tom, Garmin or BMW (which is Garmin anyway). Setting your ‘home destination is particularly confusing. You have to set a destination, press ‘go’ and then select that destination from your previous routes, where others just let you enter it straight.

I never got the point of music on a bike before this trip. Most I’ve used have had not enough screen to hear the music properly or just have a radio or worse, a cassette or a cd.

iPods have changed music on bikes. Every tune you own is a USB connection away and the amplifiers and screen on the Wing let you really enjoy it.

The flip side is the radio. This is (in manual trim like our test bike) a £27k motorcycle and it is totally unacceptable that it only comes with and FM/AM radio. These days you get a DAB receiver on even the cheapest and nastiest of new cars, so not fitting one to the most deluxe motorcycle you can buy is almost insulting. 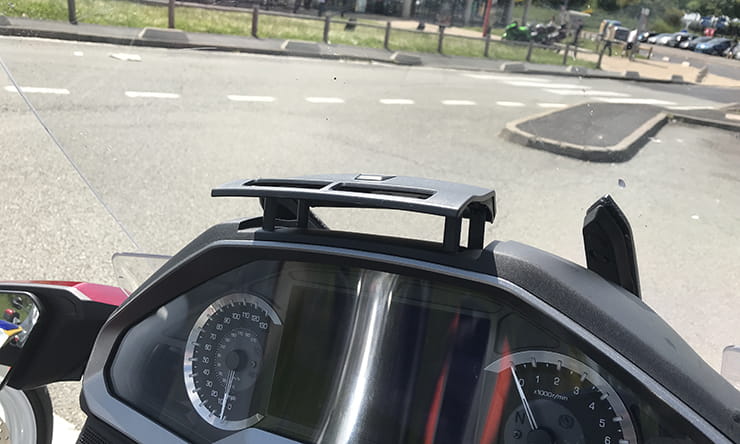 Only Honda would fit the world's best screen and then fit a wind simulator!

And because the new screen is so effective, Honda has built a small, flip-up spoiler above the clocks that directs a teeny bit of fresh air into your face, so you don’t feel too isolated. It works a bit, but I’d have preferred they spend their money on a DAB radio Disappointingly, there’s no acronym so we’ll have to invent our own. How about Micro-Internal-Air-Recirculation-System or MI-ARS for short? 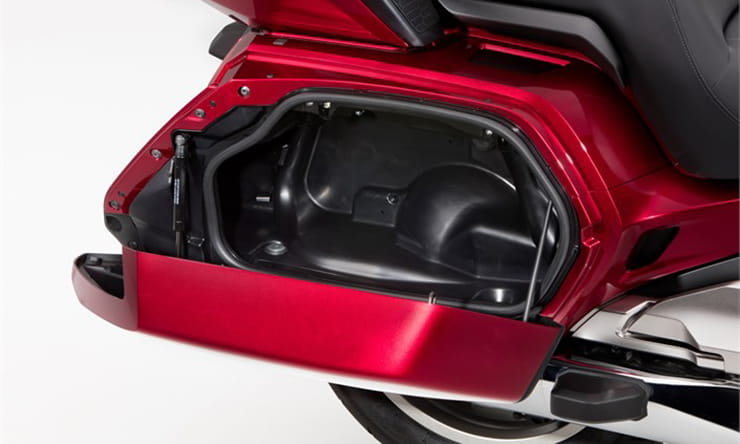 Honda needed to make the new Wing smaller because there are more existing and former Wingers buying this bike than newbies and those guys are all getting older and less able to cope with the size and weight. And one consequence of making it smaller is that the luggage space has dropped significantly. The 50-litre top box is just big enough for two full face helmets and each 30-litre pannier fills up surprisingly quickly. With careful packing, relying on your hotel to supply hairdryers, toiletries, secure parking and a partner who travels as light as you do, you can get enough in there for a week away... maybe.

There’s no easy bungee points and I guess the rack for the top box is optional. Also, I guess the real hardcore Wingers will buy a trailer, a mini caravan and who knows what else to increase the capacity and destroy the bikes beautiful poise and accomplished handling. Hey ho. 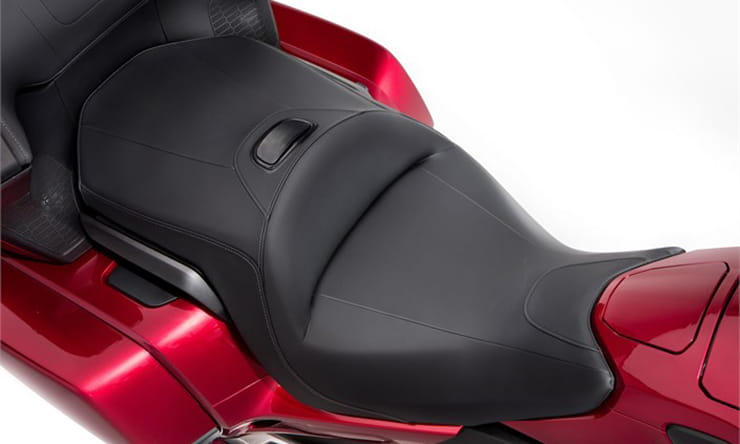 No one does comfort like Honda. Even the Fireblade is easy on your bones. This thing is just brilliant. The riding position is perfect both for long days in the saddle and controlling 381kg (plus rider, pillion and kitchen sink) through some serious Gallic twisties. The seat is firm but effective over distance, the screen is just superb, mirrors almost perfect and all the controls just feel easy.

The only niggle is getting it on and off the main stand, which needs a lot of effort in either direction. Surely if BMW can make an electric centrestand Honda can build something even better for the Wing? 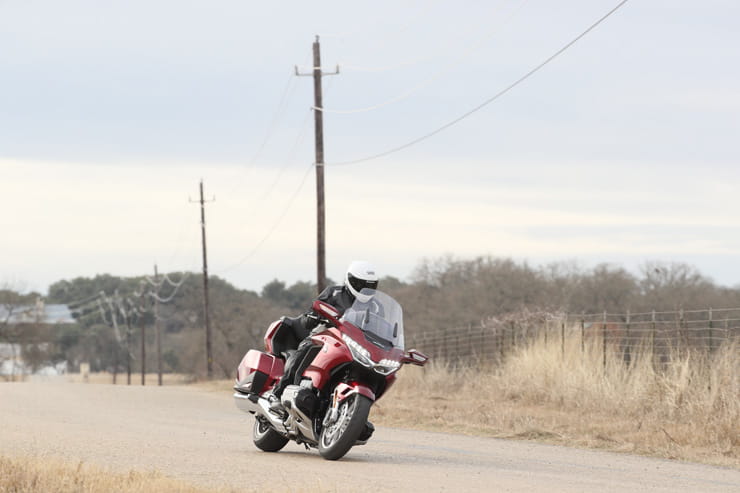 In all those miles, on all those amazing roads I didn’t once wish I’d brought another bike. Ok, maybe when we first got to the Gite and saw how steep the gravel driveway was that led down there. What better time to test the ABS than at the end of a long two days down a gravel-covered ski slope? Actually, it wasn’t a problem, but I did let experienced enduro rider Andy get it back up there the next day because, while I almost certainly could have made it, it’s not my bike and I didn’t want to break it. What I’d forgotten was that this Wing has sophisticated traction control and it rode up that slope with no issues whatsoever. I felt like a proper chump.

The Honda did distance as well as it did corners. It did economy and comfort. It kept me entertained on the motorways and safe in the tricky bits. I was cool in the stifling heat and warm on the way down - heated grips and seats doing their thing perfectly. Plus, it has reverse gear, keyless ignition, central locking and fuel filler that work brilliantly and a perfectly positioned pocket in front of you for toll tickets, wallet and phone.

The only real competition comes from Harley’s Big Ultra-Classic, which costs £2k less, has a better sound system and sat nav, a little more cool with non-riders, but nowhere near the performance or handling. Or BMWs K1600GT, which is considerably (almost £10k for the basic version) cheaper, but for a similar spec, the price difference drops to around £5k. The BMW is good - it goes well, handles well and is very comfy too. But it smashed through every single branch of the ugly tree on the way down, is a little top-heavy through the corners, has an engine that works better on paper than on tarmac and lacks the subtle refinement that comes with the Honda’s 43 years of careful, considered evolution. It’s good, but no Gold Wing.

For this year, at least, the Honda is a clear leader in the ‘most-luxurious-but-still-good-to-ride-motorcycle’ category. Please, can all of you that can afford one, go out and buy one. That way, there will be a plentiful supply of used ones in a few years that people like me might be able to afford.