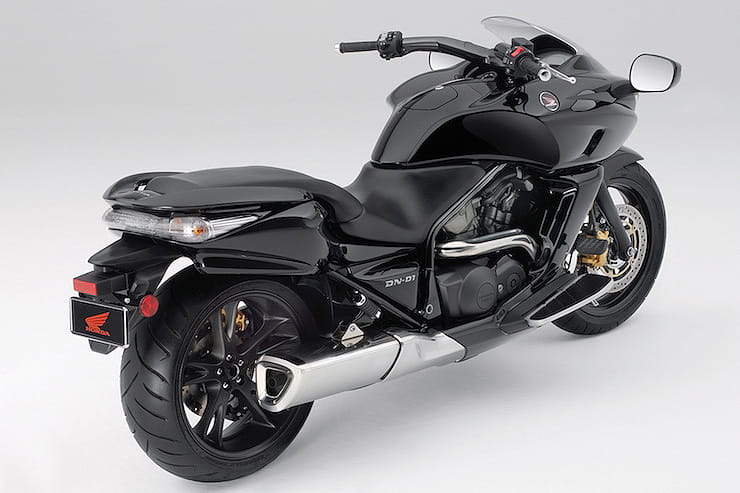 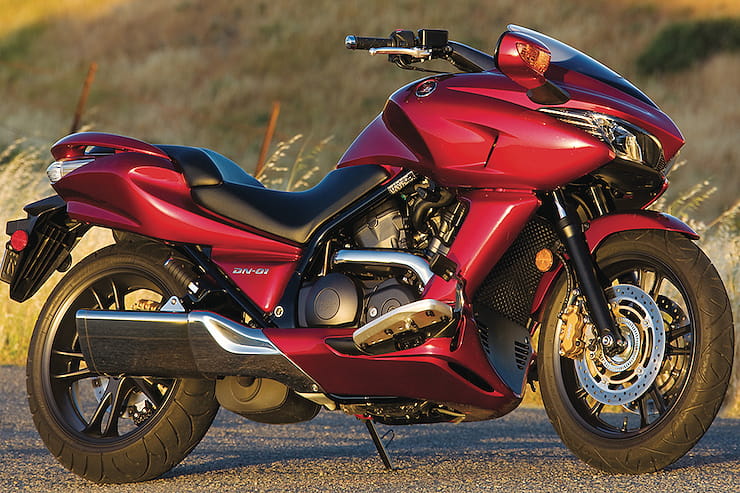 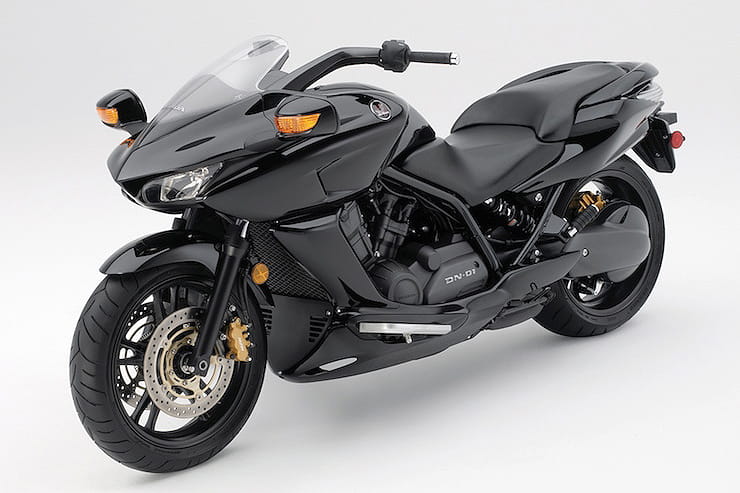 Honda has a long history of pushing the boundaries of motorcycle design and technology and the wacky DN-01 was its latest example in the late Noughties. Some succeed, some fail. But where some dazzled and become collectors' pieces, such as the CBX1000, CX500 Turbo and NR750, others, like the PC800, CTX1300 and NM4 Vultus, conceived as futuristic, sometimes automatic takes on two-wheel transport, have been less successful. The DN-01 falls very much into the latter category. With its long and low, comic book styling and novel switchable automatic transmission it promised comfortable, easy transport. But by using a reworked 60bhp V-twin from the Honda Deauville and with a £10K price tag it also had underwhelming performance and an extravagant price. It also had limited storage capacity and weather protection, practical failings that were unforgiveable considering what it was designed for. Despite lashings of Honda quality touches and a unique riding experience it found few buyers and went out of production within two years (although unsold examples were still on sale years later). Today, that unpopularity has seen prices of the few out there crash below £5000 making it a much more viable and affordable commuter alternative to a maxi-scooter. While its rarity and novelty is also now seeing prices slowly rise as its ‘future classic’ status grows…

Back in 2008 the DN-01’s £9,300 price tag was half as much again as Honda’s own, similarly powered XL700V Transalp, a bike which itself was a decent, comfortable all-rounder. That fact alone probably determined the DN-01’s failure. and resulted in the values of the few that did make it onto the road plummet over the years to come. However, that very rarity plus the DN-01 unquestionable quirkiness and novelty value also means that it’s now considered as something of a future classic, in a similar way that other oddballs such as Yamaha’s GTS1000 and Suzuki’s B-King now are, such that prices have now levelled off and those of good examples are even, slowly, on the up. Inevitably, there aren’t many currently on sale – our search unearthed just five, the cheapest being £4,500, the most expensive £6,000, all with mileages between 3 and 19,000 miles. We’ve yet to see any ‘high-milers’. 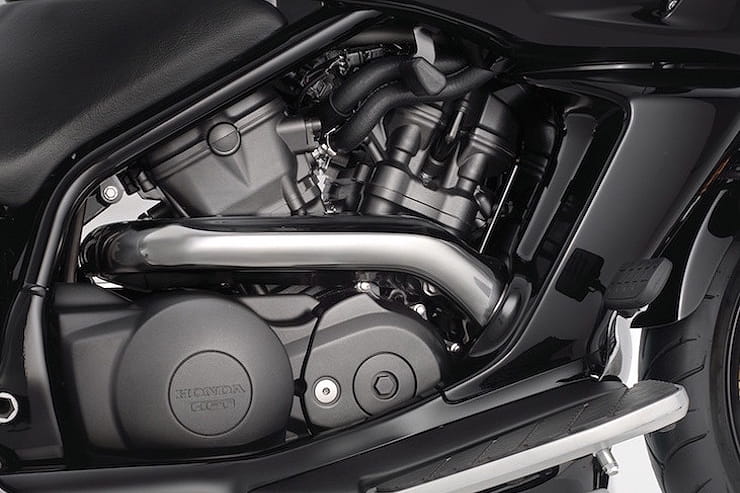 For such a futuristic, space-age-looking machine, the DN-01’s performance was actually disappointingly pedestrian. With an engine based on that of the Deauville/Transalp is a fairly underwhelming claimed 61bhp (in reality, more like 51bhp at the rear wheel due to transmission losses) which, for a bike as heavy as this, is nothing to get excited about. To a degree, however, that’s missing the point. Conceived, thanks to its sophisticated switchable auto transmission, to give a scooter-like ride, the result instead is all about being smooth, torquey, easy to use and effective. Around town, in ‘twist and go’ mode, it certainly is that: idiot-proof, immediate – even brisk. However, out on the open road at higher speeds it quickly runs out of go next to comparable, conventional bikes.

As already stated, the DN-01’s 52-degree, liquid-cooled V-twin is essentially the same as that of the 700 Deauville – or the 2008-on 700 Transalp come to that. It’s a proven, dependable and unburstable unit if lacking the power and excitement of some rivals. Instead, what really sets the DN-01 apart is its unique and ambitious transmission. Called HFT (for ‘Human-Friendly Transmission’, yes, really), the fully automatic system effectively made the DN-01 a big ‘twist-and-go’ scooter, complete with shaft drive, which was all very well and good, but Honda over-complicated it by adding modes and the ability to manually select gears. On top of that it also added hugely to the DN-01’s overall weight. By comparison, the exhaust was a conventional steel two-into-one system. Although complex, we’ve heard of no problems with the transmission (although, with so few examples out there doing so few miles, maybe that’s not surprising). It probably is worth adding, however, that Honda haven’t persevered with it, turning instead to the ‘Dual Clutch Transmission’ pioneered on the VFR1200 and subsequently also used on its NC750 family which in turn lead to the DN-01’s spiritual successor, 2014’s NM4 Vultus which, failed to catch on as well. 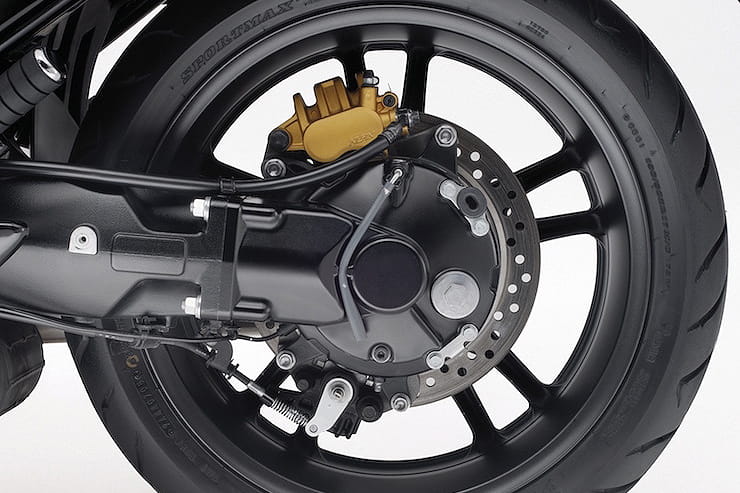 By using the same, solid but under stressed 52-degree V-twin from the Deauville and Transalp, the DN-01’s fuel consumption isn’t bad – around 50mpg on a good day, although we wouldn’t expect it to be quite as good as either of those due to its extra weight and automatic gearbox. Nor is it quite as good as most maxi-scooters.

This is another area where the DN-01’s bold concept began to become unstuck. Although its ‘long and low’, raked out, ‘scooter-meets-cruiser’ riding position is undoubtedly easily accessible and reasonably comfortable it also results in some handling quirks. Being so long and low (its wheelbase was an incredibly long 1605mm) also made it an unwieldy nightmare in congested areas and not much better on open roads. On the go the front wheel felt a million miles away and lacked any reassuring feel. And if you did line it up and crank it over it also quickly ran out of ground clearance due to the ‘feet forward’ footboards. On top of that, though on smooth roads the ride was good it also had fairly limited suspension travel, which could be jarring over potholes or bumps. On the plus side, again partly due to there being so few used examples out there, we’ve no reports of failure and being built to Honda’s high standards and leading generally cossetted lives means corrosion shouldn’t be an issue, either. 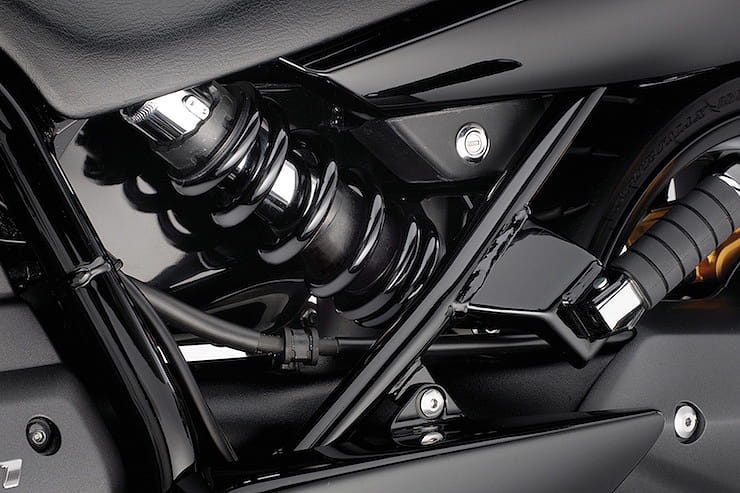 Despite faults elsewhere, the DN-01’s brakes were one of its better features. Employing Honda’s clever and effective ‘Combined’ or ‘C-ABS’ system, whereby, in simple terms, both front and rear brakes are operated, in varying ratios, by the front and rear controls, and with braking power being varied also according to ABS functions, the result is powerful and confidence-inspiring – and also suits the long and low nature of the DN-01 well.

In theory, the DN-01’s comfort is exemplary. In reality it doesn’t quite work out like that. The ultra-low and sumptuous saddle combines with forward footboards and forward, ‘arms out’ handlebars to deliver a riding position not unlike sitting in your favourite armchair. At gentle speed it’s great although around town or if manoeuvring, the DN-01’s length and weight begin to make things awkward. But on longer rides at higher speeds or on the motorway, with little weather protection from the ultra-low screen plus little of your weight supported by your legs it quickly becomes tiresome and uncomfortable. Almost without exception we found that owners fitted aftermarket tall screens.

The DN-01 came out in the era before the sophisticated electronic rider aids we’re so familiar with today so, flash ‘HFT’ transmission, ‘C-ABS’ brakes and funky looks aside, there’s not actually much to get excited about. Yes, the digital dash is fairly flashy but being LCD already looks old-fashioned compared to modern full colour TFTs. The shaft drive is a useful addition, too. But the lack of any scooter-style storage is a big oversight. Worse, being so niche, there are few aftermarket accessories available, either, the most common being a necessary top box (which somehow spoils the futuristic looks) and an extended screen. And, in case you were wondering, there is a (small) DN-01 online forum www.dn-01.net but posts and activity are fairly slow. 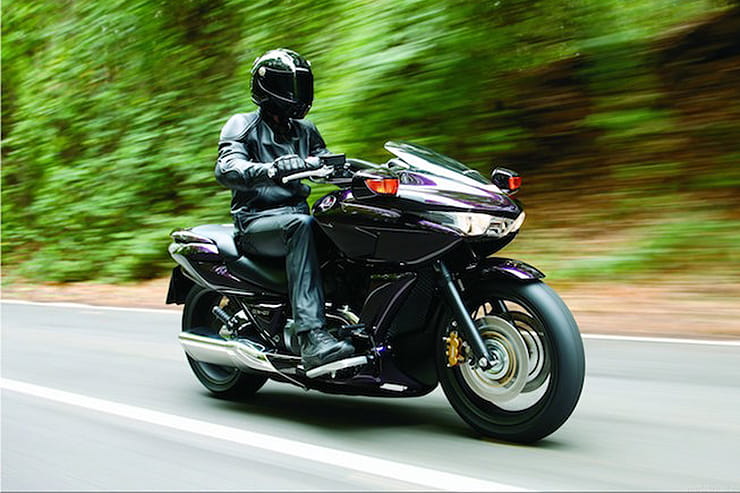 Like many other Hondas over the years – PC800, Vultus, CTX1300 – the DN-01 is a well-intentioned oddball with some interesting tech and ambitions to be a ‘two-wheeled car’ that, in reality, proved so expensive and flawed it was quickly consigned to history. In its favour, to a large degree the novel auto ‘box and striking looks/ergonomics work well, but its flaws (lack of luggage, wind protection, expense) are unforgivable and any potential owner would be far better off getting one of many effective maxi-scoots. As a quirky, rare collector's item that’s also OK transport, however, and one that now is at an affordable price, the DN-01 has its temptations – and you’ll always draw a crowd in a car park, too.

Three things we love about the DN-01…