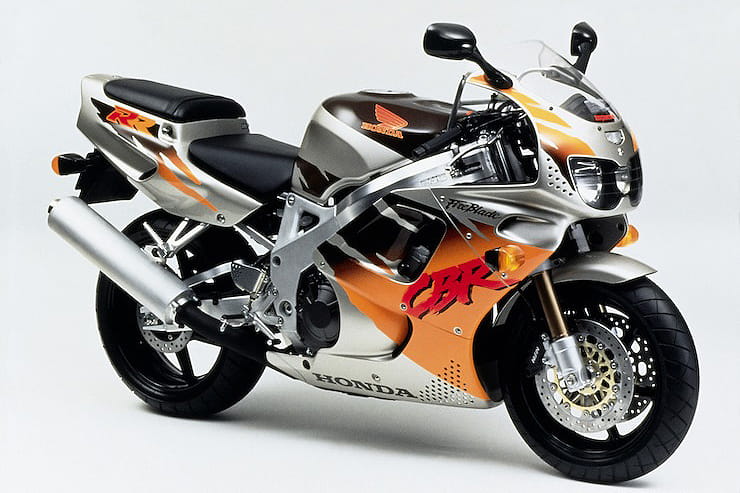 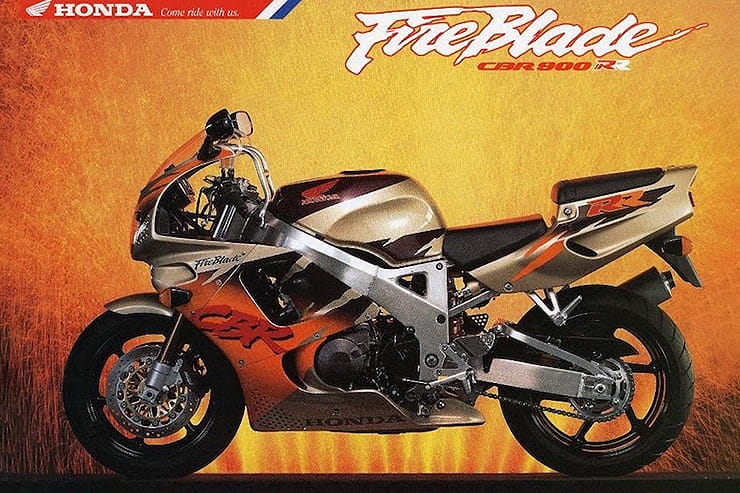 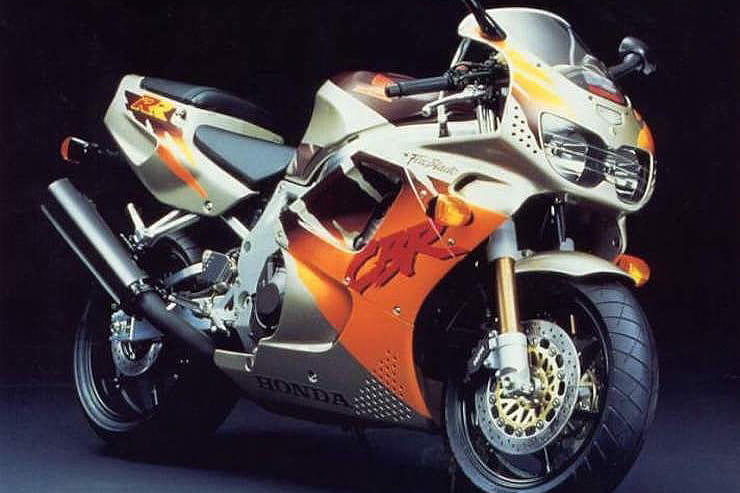 Everyone knows the name FireBlade, but there is only one model of this iconic brand that has forged out its very own niche. It’s not known by a number, capacity or even letter designation. This Blade is known by its paint scheme – the Urban Tiger.

Launched in 1994, RR-R model was a subtle refinement of the original, revolutionary 1992 FireBlade with chassis modifications and a new look. The fairing was made wider and taller while new lights made it instantly recognizable: gone were the twin round units, replaced by the new ‘foxeye’ headlight arrangement.

But it’s the Urban Tiger paint job which really makes this version stand out. Although disappointingly described as beige in its logbook, the Urban Tiger is one of the most iconic paint schemes ever put on a motorcycle, right up there alongside the Lucky Strike RGV500. What’s more, with prices still low, the Urban Tiger is now not just better, but far better value than the 1992 original, too.

There is no denying it, collectors are always after the first model and in this case the FireBlade’s boat has well and truly set sail. A few years ago a 1992 original in the alternative black paint scheme could still be found for a reasonable sum of money. Nowadays it has joined the ranks of the over-priced like the classic blue and white 1992 colours with good examples between £6,000 and £8,000.

So why not think outside the box and pick up the second generation ‘Blade from 1994 in the iconic Urban Tiger colour scheme? Not only does it look cool, it’s a great talking point and a machine that everyone seems to remember fondly. Best of all, good examples can still be had for as little as £3,400. We even saw one at under £2K recently. Prices are on the rise, though, we’ve also seen some good examples for as much as £5,000. 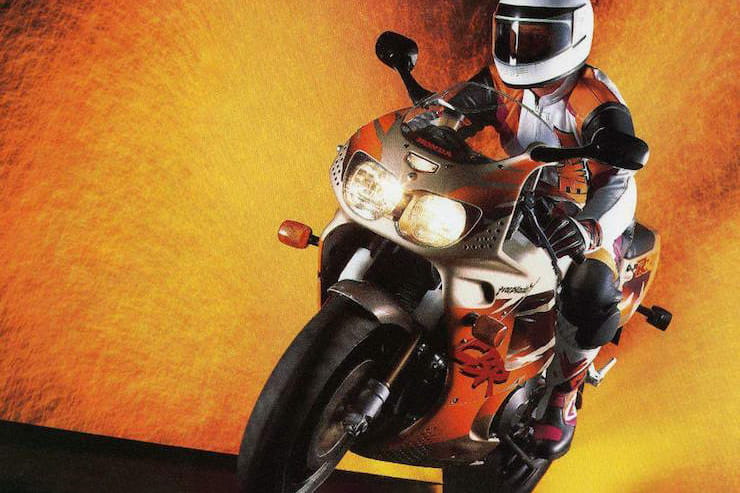 With around 124bhp at peak (it oddly varies quite a lot between different examples) the first two generations of ‘Blade were never the 140bhp+ powerhouses some contemporary rivals, like the Yamaha EXUP and Suzuki GSX-R1100, were. Instead, it delivered blistering, game-changing performance by marrying that to ultra-light weight – it was around 30kg lighter than the EXUP, for example. The fairly long stroke engines grunty, torquey delivery, ably assisted with that, delivering plenty of midrange to help catapult out of corners. That kind of performance was finally beaten by Yamaha’s R1 in 1998 and has been thoroughly overtaken by more modern superbikes but an early generation ‘Blade is still entertaining, lively, surprisingly tractable and far easier than you might expect.

CBR600F-derived in-line 893cc four was essentially unchanged from that of the first generation 1992 FireBlade and, in typical Honda style, is a solid and durable unit whereby mileages can easily run up to 100,000+ without concern as long as it’s correctly maintained. The gearbox received some subtle tweaks to smooth operation slightly and is generally durable and fault-free, too, although chains and sprockets need to be checked. The exhaust, considering it’s getting on for 30 years old, is almost certain to have rotted and been replaced by an aftermarket item but if it’s survived it should be prized. Originality, as always, is king. 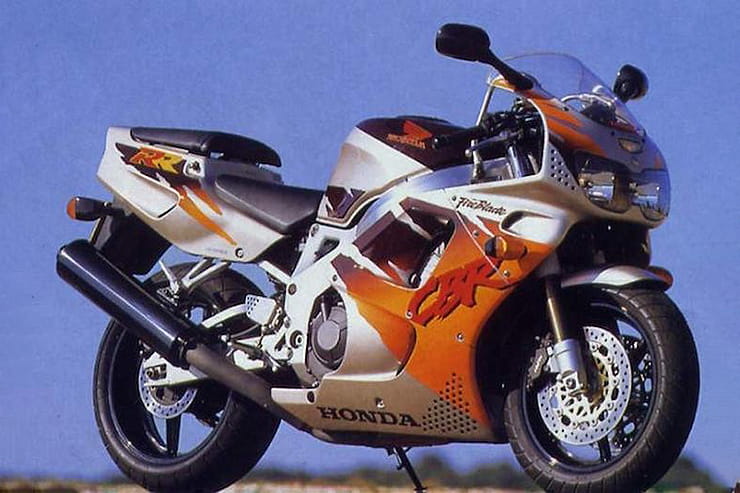 Not something the early FireBlade – or in fact any variant – was built for but, thanks to the bike’s light weight and its long stroke, four cylinder engine’s comparatively grunty, lower revving nature, not as bad as it could have been either. Gentle riding, if you’re capable of it, can produce consumption figures approaching 50mpg, although, realistically, lower 40s are more likely. That, combined with the fairly small 18-litre tank should result in a realistic range just above 150 miles.

Styling and paint job aside, this is where the second generation ‘Blade was most improved. Most of the basics, however, were unchanged: the slightly ‘twitchy’ 16-inch front wheel (which today also limits tyre choice), stumpy wheelbase, sharp steering geometry and featherlight overall mass which all combined to allow the ‘Blade to literally run rings round its superbike competition of the day. But suspension options were also improved by adding a compression adjuster to the forks and the rear shock was also re-valved which improved the ride. By now, unless immaculately maintained, both will likely need a complete overhaul or, particularly at the rear, replacement. 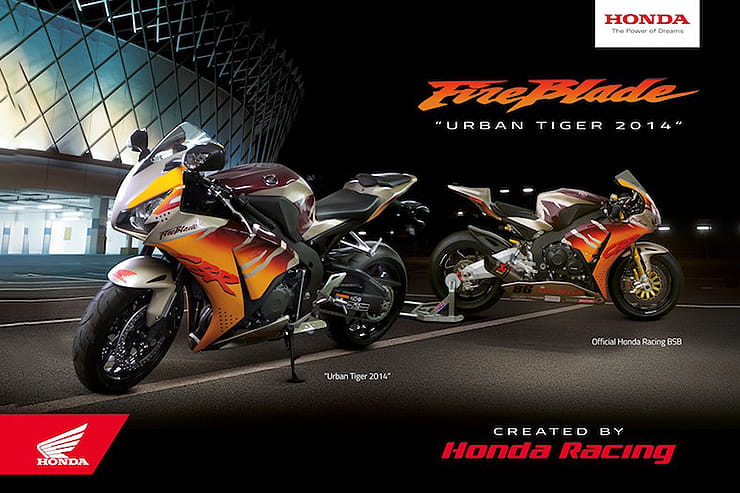 The second generation ‘Blade’s brakes were also unchanged from those of the original, comprising fairly typical for the era twin discs with non-radial Nissin four-piston calipers. If maintained correctly, they’re better than most set-ups from the era, mostly thanks again to the bike’s light overall weight. They do, however, lack bite and power compared to modern radial set-ups. Performance pads and braided hoses will improve things, but only slightly.

You’d be forgiven for assuming the sporty, small, lightweight FireBlade offered little in terms of comfort over distance – but you’d be mistaken. Honda traditionally place more emphasis on comfort and good rider ergonomics than most of its Japanese rivals and nowhere is this more evident than on the early ‘Blade. Although undeniably stumpy, the riding position is reasonably upright and the screen gives a good amount of weather protection. The sports seat is wide and surprisingly comfortable, and the ergonomics are impressively roomy. That all said, it’s significantly less generous for pillions (although the fairly large, flip-up pillion pad is notably bigger than most rivals) and long-distance touring isn’t its forte.

The original FireBlade and its Urban Tiger successor is another bike from the ‘analogue’, pre-electronics era, meaning that sophisticated modern rider aids, such as traction control, are again conspicuous by their absence. Nor is there ABS. While, as a bike built on the mantra of ultra-light weight, also means that less is more and, in terms of equipment, it only has what it needs. That said, the race-style clocks are attractive and sufficient, you quickly re-attune to the handlebar-mounted choke on start up and the bike’s sheer popularity means there’s plenty of aftermarket accessories available, ranging from performance and cosmetic bolt-ons to luggage, high screen and comfort seats. 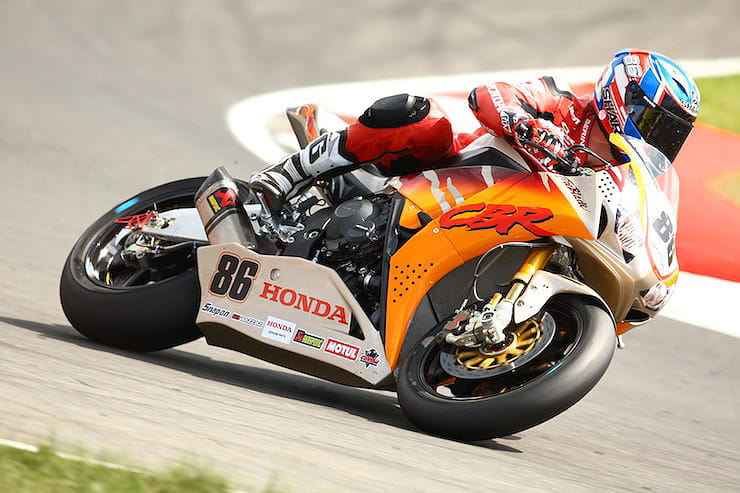 If you’re after a classic, early FireBlade the Urban Tiger is an eye-catching option at a far more affordable price than the now pricey 1992 original. It rides just as well, looks arguably even better and is far better value. On top of that, it’s solid and reliable, its Honda quality shines through and there are still plenty of examples out there. Buy wisely, though: abuse, neglect and crash damage are fairly common. There’s also plenty of help and support available, too, from the likes of http://www.fireblades.org/ – an active forum dedicated to FireBlades of all ages – and http://www.padgettsmotorcycles.com/ who know everything you could ever need to know about the Blade. In short, Honda got the early FireBlade well and truly right with the ‘Urban Tiger’ (the succeeding 1996 and 1998 versions are nowhere near as desirable) a fact it recognised when it brought out the 2014 version in a replica paintscheme as a homage pictured here. Buy a good one while they’re still cheap – you won’t regret it.