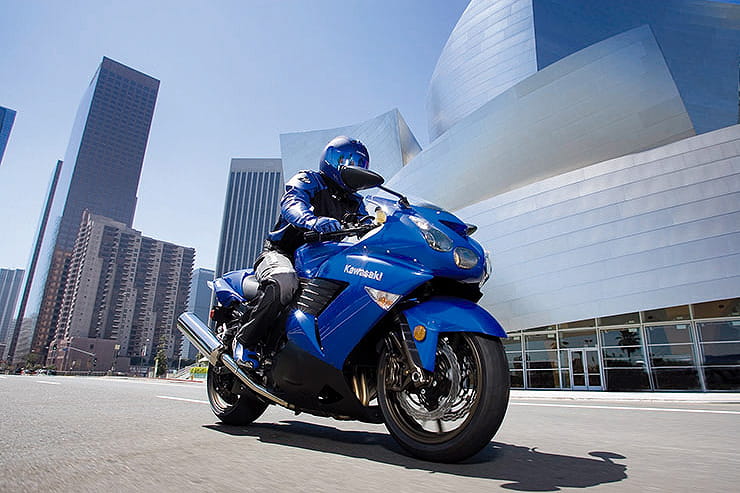 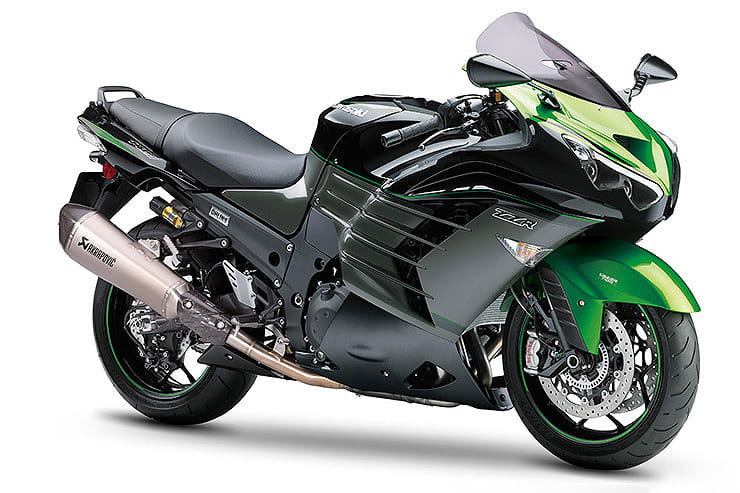 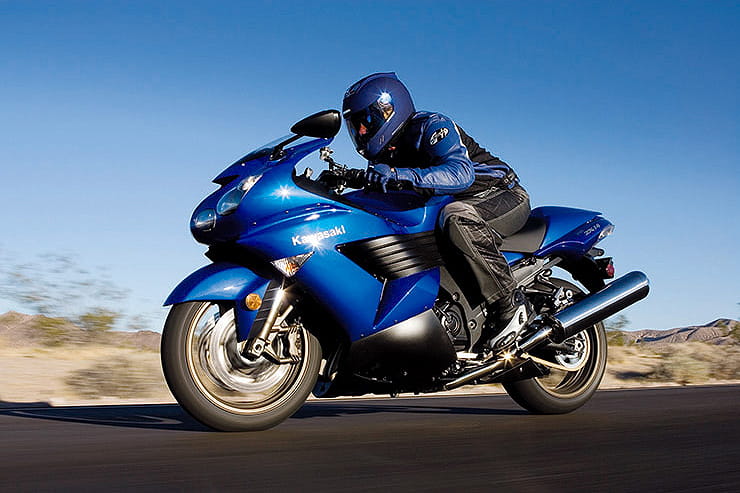 Although Suzuki’s Hayabusa is generally regarded as the quintessential hyperbike, in actual fact the ZZR1400 is a far more accomplished machine in just about every aspect. Development for the 'Busa effectively stopped in 2008 with its second generation, making even the latest models pretty old-school in their engineering and seriously lacking in terms of technology. However, in contrast Kawasaki have continued to evolve and refine the ZZR with the current generation boasting everything from traction control to ABS and power modes, making it the ultimate of its breed. So, if you like the idea of a hyperbike but want some modern creature comforts, your only real option is the mighty Kawasaki - which is no bad thing at all because a used ZZR1400 is a brilliant machine that has more gloriously smooth mid-range than the supercharged H2 SX and costs considerably less!

If you want the first generation of ZZR1400, which has a smaller engine and no rider assists, you can pick one up for as little as £3200, however it will have covered a fair few miles and spending closer to £4000 should secure a nicer example with ABS models starting at £4800. Prices for the updated ‘bigger engine’ begin at £6000 with Performance Sport models upping this by about £500-1000 depending on the year. Armed with £7500 - £8500 you can get a really lovely 2016 bike with a low mileage, which is about all you need as it hasn’t markedly changed since this point and even the 2020 bike isn’t Euro5-compliant.

One word – incredible. In fact, two words – absolutely incredible! The ZZR’s amazing inline four engine is absolutely bursting at the seams with huge amounts of mid-range torque that puts all other bikes to shame. There is an old expression ‘there ain’t no substitute for cubes’ and the ZZR’s ultra-smooth and effortless power plant perfectly demonstrates this adage. Where the H2 SX with its super charger on paper seems more impressive, when you ride the ZZR back-to-back with the smaller capacity H2 you can see the benefits in mid-range and torque you get with a bigger capacity over forced induction. Any gear, any revs, the ZZR1400 drives with no fuss, a beautifully smooth throttle connection and absolutely ferocious acceleration should you give it the full beans. What a motor. 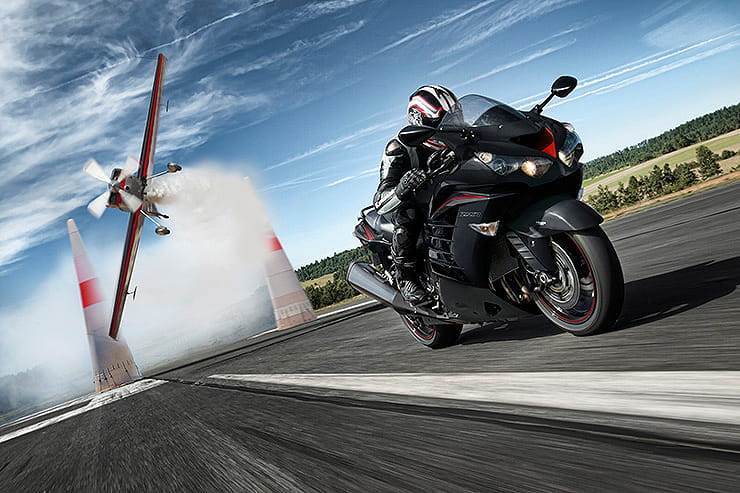 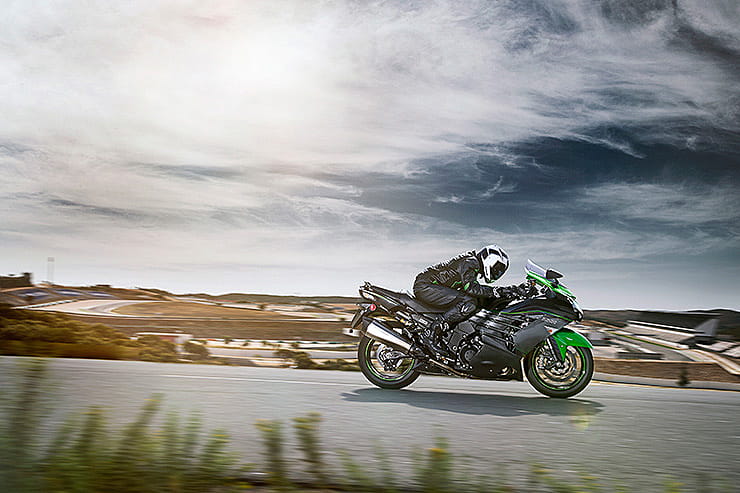 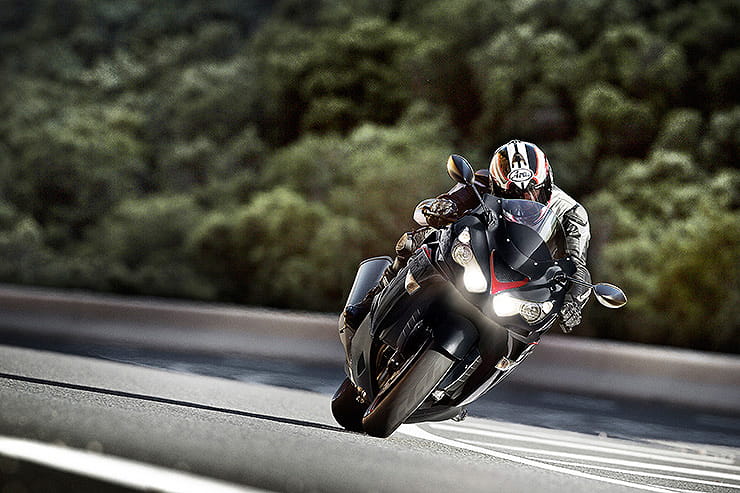 As there is basically no way you can unleash even a fraction of the ZZR’s power on the road the motor remains in a very under-stressed state so problems are rare. When buying used the only thing you need to keep an eye out for are sensor failures (check the dash for warning lights) and service history. As the ZZR runs a monocoque chassis it is very awkward, and therefore pricey, to work on and a major valve-clearance service (which is every 16,000 miles) costs a whopping £600 at least where the smaller 4000-mile ones are £150 and £250 respectively depending on what is required. Rot is a common complaint on the radiator due to dirt getting caught and trapping water, so inspect it well as this is a big bill for a new unit, and spend a bit of time looking behind the fairing. The thing with ZZRs is that despite the fact they are generally well used and often well cared for, due to the huge fairing many bikes suffer with issues such as corrosion behind the fairing and that is easily missed. Always give the bike more than a cursory glance over because a very tidy fairing may well hide high-mileage induced horrors behind it. The ZZR has never had a quickshifter as standard but a few owners will fit them, which isn’t a great idea as it can cause increased gearbox wear. In 2014 Kawasaki released the first of their Performance Sport models, which came with official Akrapovic cans (road legal) alongside an Öhlins shock. These do look much better than the OE dustbins so if you can get a PS model, it is worth buying as in the used market they are only about £500 more than a stocker.

The ZZR’s bags of torque means that it can be ridden quite low in the rev range, boosting fuel economy. On a spirited ride the mpg can drop into the 30s however for most rides you should see in the mid 40s for the mpg. That’s not bad at all considering not only how powerful the bike is but also how heavy it is as well. 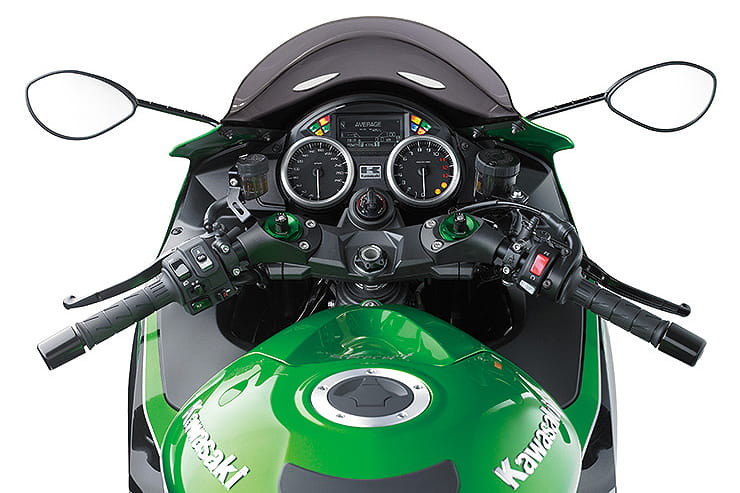 Long, low and a bit of the heavy side, at slow speed the ZZR does feel like a big old bus but this is due to it being designed to be rock solid at speed, which it is. Cornering on a ZZR is more a case of flowing and rolling through the bends due to its low centre of gravity, but ride it in this way and it is an accomplished handling machine. You can certainly enjoy the corners on a ZZR and it is sportier than its main rival, the Hayabusa. Not only this, as you have the benefits of modern electronic assists such as traction control, you can open the throttle earlier without the worry about it all getting a bit sideways. When you have such enormous amounts of power and torque on tap, especially in the wet, this is most certainly a good thing. As standard the ZZR’s suspension hits a nice balance between sporty and comfort with a plush ride quality. The Performance Sport model adds an Öhlins shock, which in all honesty is more about bling than performance on a bike such as the ZZR, but it is always nice to have and unlike the OE shock the unit is fully rebuildable, so it will save you cash in the long run. When buying used, always give the suspension linkages and the suspension units themselves a good check because the weight of the ZZR can mean seals wear out while high-mileage bikes suffer seized linkages. Cush drive rubbers can also wear quickly due to the power alongside wheel bearings, but both items are cheap and easy to replace.

The ZZR’s brakes have long come in for criticism from owners. The fact it is a big, heavy, and very fast bike sees it hard on brake pads and even discs, so always give the calipers a good inspection for pad life and also check the discs’ thickness as these wear out. Get the front wheel up in the air (Kawasaki sell an optional extra centre stand, hopefully it will be fitted!) and spin it to check for sticking pistons and warped discs, but also give it a side-to-side wobble as wheel bearings are also a consumable item on the heavy ZZR. ABS arrived in 2009, so buy a bike after this date if you want it, while the 2016 Performance Sport edition added Brembo M50 calipers and a Brembo master cylinder, seriously adding to the bike’s stopping power. If you fancy a bit of track (or top speed straight line) action, this is the model to buy. 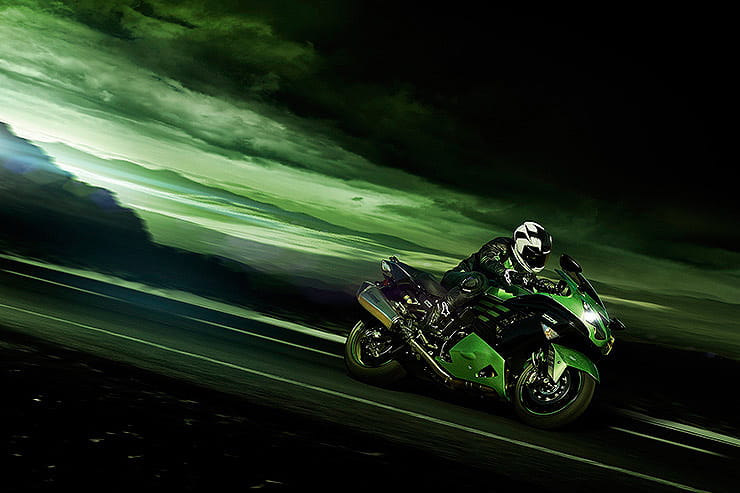 Blessed with a big, comfortable, seat and a set of clip-on bars that are set to prevent the onset of wrist-ache, the Kawasaki is a very comfortable machine when it comes to devouring miles. All helped by its simply outstanding motor. One or two-up, it makes absolutely no difference to the ZZR’s mighty engine. With a mountain of torque on offer, inline fours don’t get any smoother and you can be incredibly lazy with the gear changes as it will happily pull top from as low as 30mph with no judder or protest. This easy-going nature is one of the ZZR’s main selling points as it makes it a really good old-school sports tourer. A taller screen and a set of panniers (some riders go for bar risers) and you have a brilliant mile-muncher that is effortless on motorways.

ABS arrived in 2009 but you really want the 2012-onwards bike as it has three-stage traction control as well as variable power modes. The 2016-onwards bike has a slightly flasher dash and revised ECU settings to make it Euro4-compliant but this isn’t much to write home about. In terms of accessories, the best advice is to buy the Performance Sport model because the Öhlins shock and Akrapovic cans (or any aftermarket cans to junk the ugly and heavy OE units, the dual titanium Akras are £2219 from Kawasaki as an accessory!)) are all you really need to add to a ZZR. A few owners go for a taller screen, which is good, or swap the brake pads for higher friction items but that’s about it. You can get the ECU re-mapped or fit an electrical device (a TRE) to remove the top speed and acceleration restrictions if you want but on the road this is a touch pointless. Aftermarket firms make hard luggage (Kawasaki do as well for some model years), which is good for touring, and so is the optional extra centre stand, which is £255 from Kawasaki to help lube the chain to extend its life.

If you are after a bike to whisk away the miles while also delivering some fun in the bends and packing the ability to force your eyeballs deep into the back of your head, try a ZZR1400 out for size. It is a very special bike indeed and as it looks very unlike Kawasaki will make it Euro5-compliant as they have the H2 SX to sell, it is also the last of its breed. Try one out, not only will its sheer speed leave you speechless, you may very well fall for its relaxed nature and ultra-smooth power delivery.

Three things we love about the ZZR14… 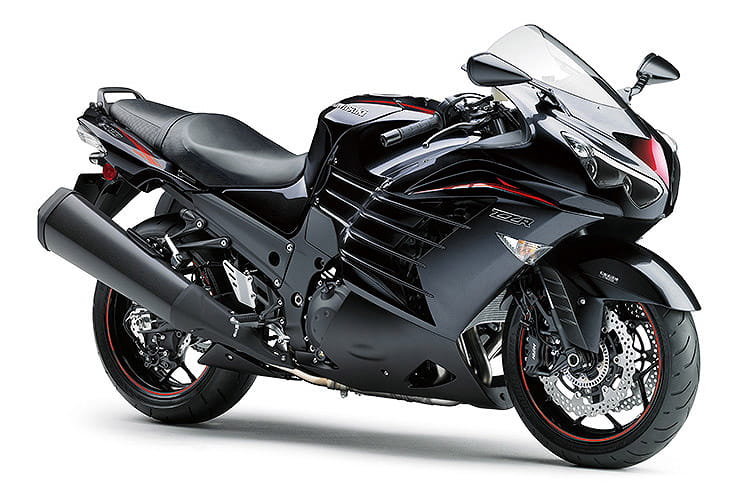