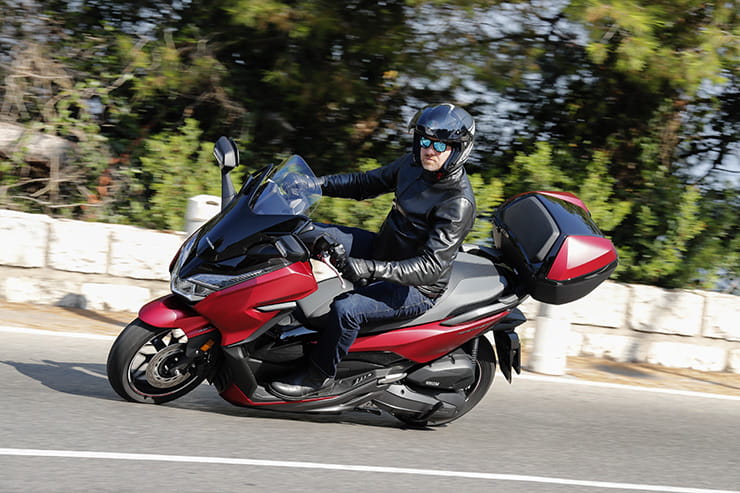 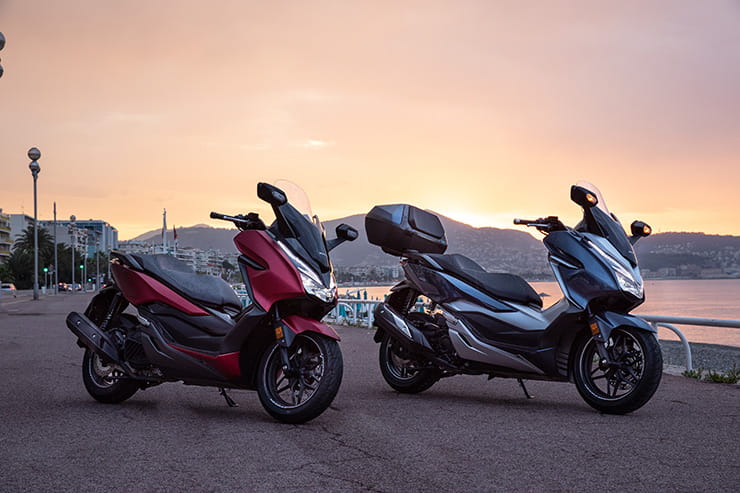 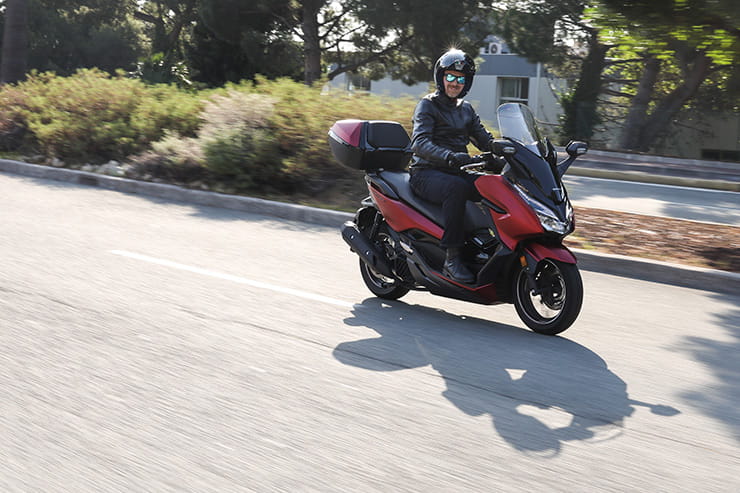 Honda’s premium spec and CBT-friendly scooter (albeit with L-plates) Forza 125 was Europe’s third best-selling 125cc scooter in 2017 behind its stable-mates, the SH125 and PCX125, with over 30,000 sold since its launch in 2015. Mixing performance and comfort with sporty and touring ability, this Italian-built super scoot gets an overhaul for 2018 with mainly aesthetic and practicality-led upgrades. We were invited to the European press riding launch in the South of France to find out more.

In dealerships now but priced at £4689, the 2018 Honda Forza 125 is a little pricier than its two main rivals; Yamaha’s XMAX 125 at £4549 while Kawasaki’s (Kymco-based) J125 is £4099. The biggest difference between the Honda and Kawasaki is the build quality with the Honda offering classier styling, components and functionality. Dimensionally the Forza is a little more compact than the Yamaha but only fractionally shorter in length, height and width too but we’re talking only a few mm’s. The competition is tough in this market between two very good maxi-scooters. 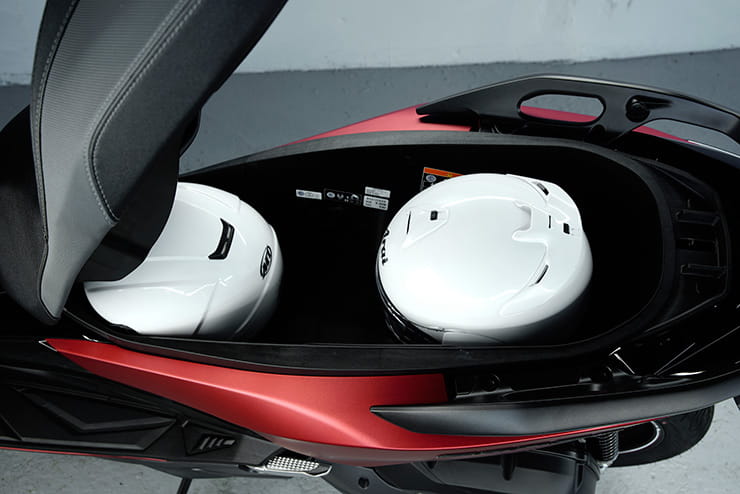 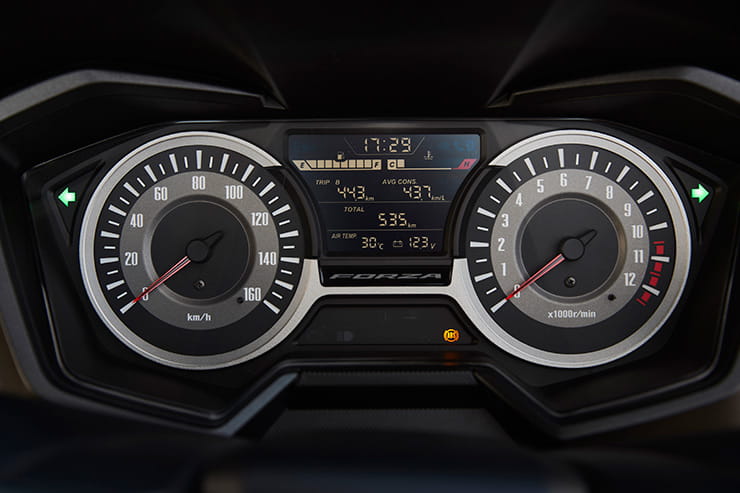 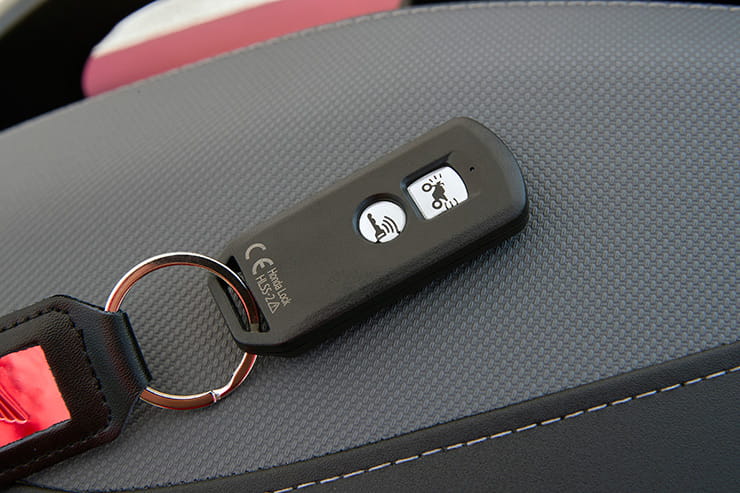 Leading on from the 2017 updates which saw the Forza 125 become Euro 4 compliant while being treated to new mirror positions, Michelin tyres becoming the OE as well as the new Smart Key (keyless) system, 2018 brings new styling, LED indicators front and back plus a new instrument panel with more information, an electronically adjustable screen and more space under the seat and in the side pocket. The screen is remarkably fast and smooth. The up and down activation is operated via a rocker switch on the left-hand bar with a 110mm difference between lowest and highest setting, taking just 1.5s from minimum to maximum. On a hot day around the French Riviera I was pleased with the breeze but at even at its highest setting, the screen was possibly 10-20mm too low for a 6-footer like me on the motorway. No buffeting as such but a little extra protection would have been welcome. Under the seat and 2 extra litres of space has been found, allowing for two full-face helmets and four different layout options courtesy of a plastic divider. Also, the left-side pocket in front of your knee is vast enough to store a 1 litre water bottle, it has its own separator panel and houses a 12v socket too. Though for me, a USB port should have been an obvious addition. Maybe even two. Meanwhile, the new instrument panel provides an analogue speedometer and rev-counter which flank a central digital display which is very easy to see and read. For a premium model, it’s a bit old school in appearance, functionality and operations. The left-hand bar mounted switches have been nabbed from another model with the Info A and Info B buttons not uniform in size, oddly spaced apart and doing almost an identical job.

An A1 licence allows you to ride a bike or scooter with a maximum power of 11Kw, or 14.7bhp if you’re dealing in old money. Even a CBT would be permissible on the Forza 125 so long as L-plates were equipped and no passengers. So guess what, the Forza 125’s 4-valve, 4-stroke, liquid-cooled motor makes 11Kw at 8,500rpm while peak torque is 12.5 Nm (9.2 ft lbs) @ 8,250 rpm. “Forza” means “power / to be strong” in Italian so give the throttle a full twist off the line and you’ll be wiping the drag-start floor with the other 125cc commuter Grand Prix competitors. There’s enough to quickly get up to filtering speeds which are the Forza 125’s expertise of course, and its smooth too, with no vibrations. Honda even claims 0-200m takes 13.4 seconds. Roll-on acceleration is surprisingly handy. While cruising around the narrow, twisty and often bumpy coastal roads in between Nice, Antibes and Cannes even a short, sharp throttle blip from 25mph is enough to skip by some lycra-cycler or drop-top anything while top speed is easily north of 65mph, a fact registered by the GPS of a fellow journalist on a motorway section. 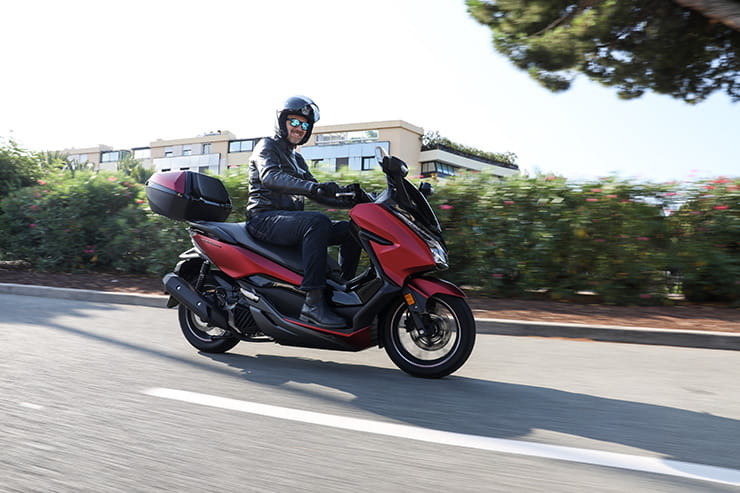 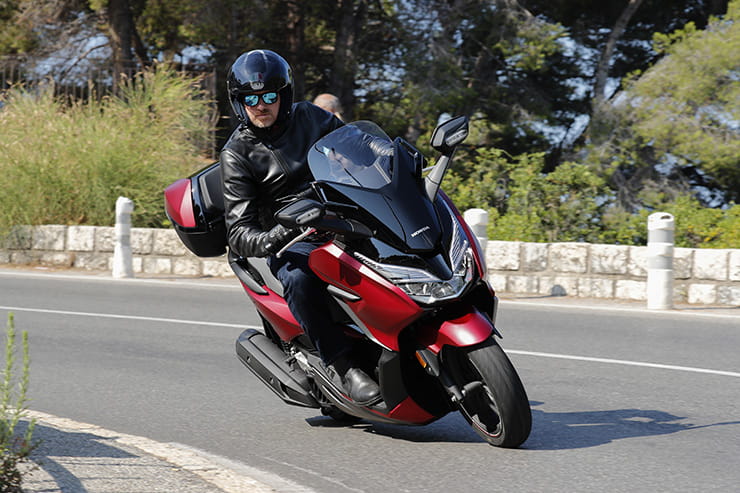 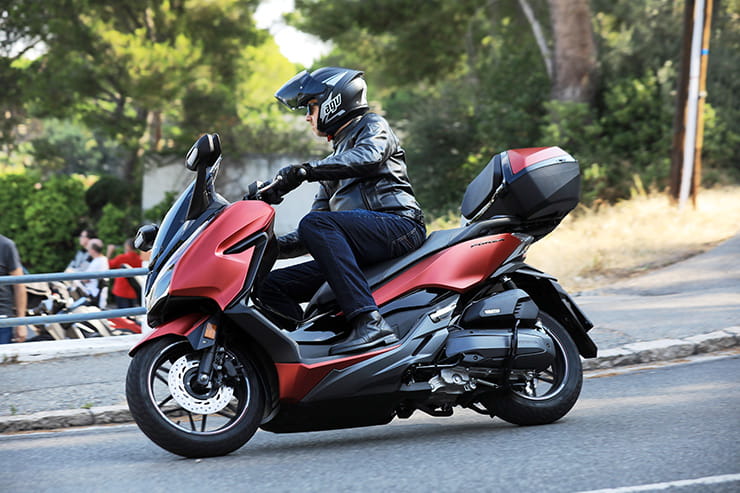 The 4-valves used in its engine is unique in the Honda 125cc line-up, and the smaller of the two-Forza line-up has been created to mix a little sportiness (for a 125) with a practical edge. Modern design and agility meets comfort and a mega mpg, all in a lightweight 162kg package – and that’s a wet weight too. The smooth-running engine contains an offset cylinder and compact radiator plus a brushless ACG starter which acts as both the motor and alternator. Including the Idle Stop technology, a 310-mile range from the 11-litre fuel tank should be achievable which equates to 128mpg. However, while this technology is readily available on modern cars as well as several other scooters, I’m not a fan. When stationary the engine cuts out but only after 3 seconds, if you’re on the brakes, oh and only if you’ve been above 15kph. A rocker switch on the right-hand bar allows you to turn the system off but a word of warning; don’t do it while the engine is already doing its Idle Stop… because it turns it off completely requiring a restart. Not convenient when the lights go green. Yes, I speak from experience and I just don’t get how it can be useful, the motor is so quiet and vibe-free at 0mph anyway.

Despite being designed by the same team who are responsible for the Vultus, on this occasion those accountable had clearly not been on the saké the night before they designed the upgrades to the 2018 Forza 125. Sleek design, cutting edge lines and comfort as their priorities, I think they nailed it. Some may argue that scooters can never look ravishing or radiant, stealthy or sexy but beauty, as they say, is in the eye of the beholder. At 162kg, the Honda is 13kg lighter than the Yamaha and even with my bulk on top the immediate speed isn’t too sluggish. Fine, it’s not going to trouble many 0-60mph times but thankfully the comfort and practicality marks are there in abundance even if the power figures aren’t. A tubular steel frame, 33mm telescopic forks and preload adjustable twin shocks make a handy concoction for a comfortable ride. Well, comfortable enough for smooth city streets. Michelin City Grip tyres adorn the 15” front and 14” rear wheels and other than a zebra crossing positioned ridiculously on a downhill right-hander that caused a little slide, the rubber stood firm. The 256mm single brake disc on the front is strong enough to halt a 162kg (plus rider) 125cc without being too grabby or lunging forwards but the ABS digs in on the rear a little too quickly for me. Incidentally, the rear brake lever needs to be held in to start the bike. 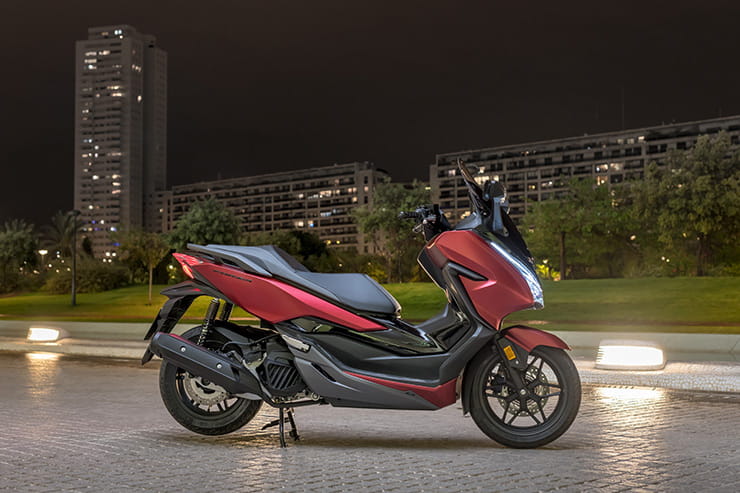 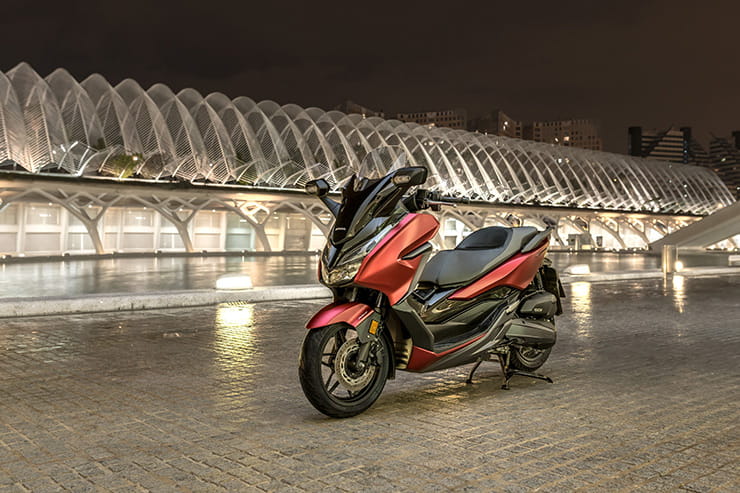 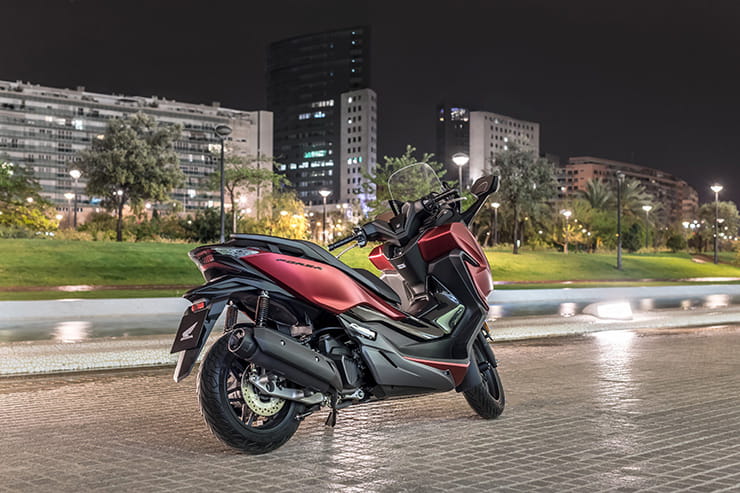 Sit astride the comfortable and 780mm high saddle and you quickly realise there’s loads of room to stretch out, even for the taller riders, it feels so much bigger than a 125cc scooter commuter. Flat-footed or feet out in front are options while the handlebars are neatly positioned and the quality of finish across the instrument panel, switches, keyless ignition control, storage and screen evident. The Forza remains stable whether you’re tucked in behind the screen for a bit of sporty riding or in a more relaxed touring style. The one-piece, twin-height seat is beautifully designed, plush and offers lower back support. It hinges from the front to lift up revealing the massive underseat storage space. Plenty of room in there for your tuxedo and casino winnings.

In the five-colour range only Black, Matt Carnelian Red Metallic (new for 2018) and Matt Lucent Silver Metallic are coming to the UK when they land in dealerships anytime from now onwards. The rear-view mirrors have indicators built-in and do a very good job. Nice and stable while easy to adjust. Adjacent to the master switch in between your legs, the spring-mounted double switch allows either the fuel cap or seat to be opened. A side-stand and centre stand make for easy parking options while the large, curved pillion grab handles and decent sized pegs will be a god-send for any would-be passengers. Without modes, traction control settings or electronically adjustable suspension, the Forza 125 has the usefulness of being able to just jump on and ride. My test bike had the optional 45-litre top box and accompanying rack fitted which requires a key to remove it. It also comes with a back rest for the pillion – one of the many neat touches carefully though about by Honda’s designers. Wheel graphics, heated grips and an alarm are available on the optional extras list although I’d like to see some sort of linked app that could give you peace of mind when it comes to security or even how much fuel is in the tank, for example. 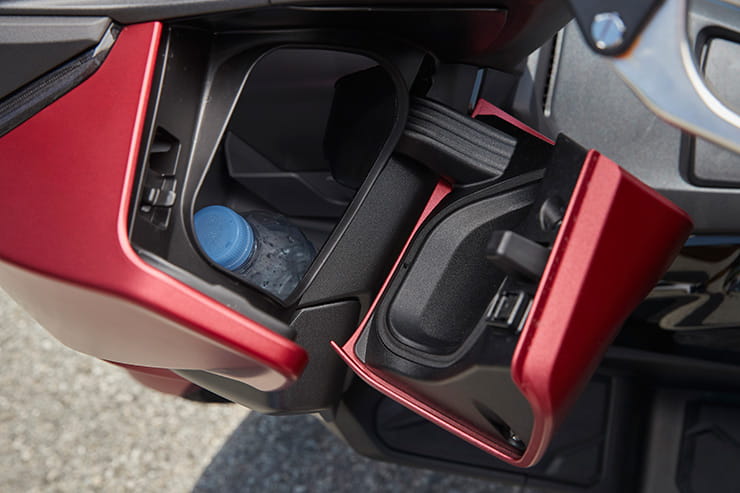 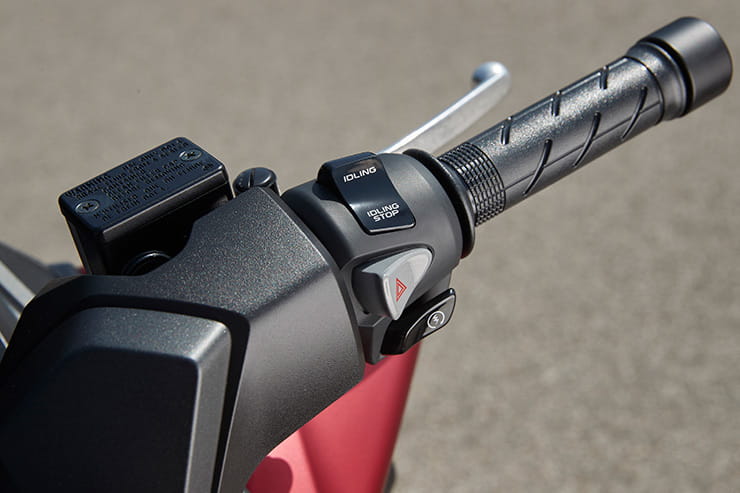 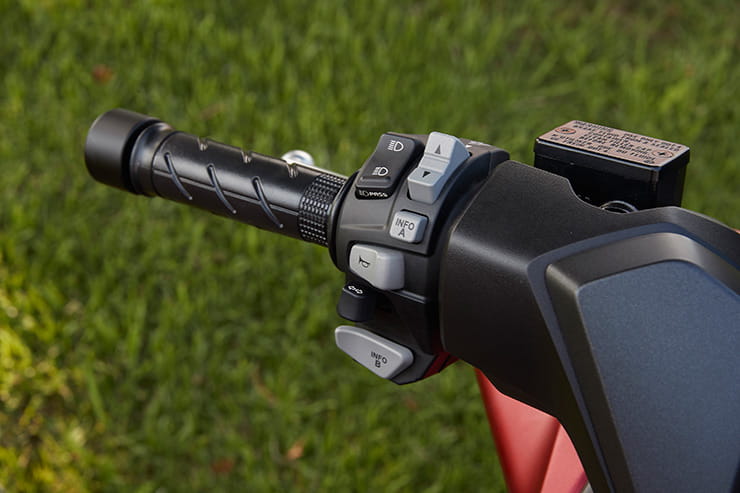 Our European cousins may well have the scooting popularity sorted with the Spanish, Italians and French dominating the sales charts and swallowing up Honda’s, Yamaha’s and Piaggio’s among many. To us, a nation of car lovers, the practicality and cost efficiency of owning a 125cc scooter seems to be a blindspot. Why oh why don’t the users of whichever horrendous train service that supplies our cities wake up and smell the 4-stroke? A scooter that looks this good, rides this comfortably and provides enough room for handbags, briefcases, locks, lunch and a 4-pack has to be the best kept commuting secret when it comes to our little island. Honda have provided an easy-to-use and ideal commuter. It’ll stand up and be counted on the dual carriageways while making mincemeat of any heavy traffic situation. Agile, plush and premium yet a little pricey for a one-off purchase especially when it comes to adding a few extra touches; a top box for example.

Three things I loved about the Honda Forza 125 …

• Clumsy A & B info button layout 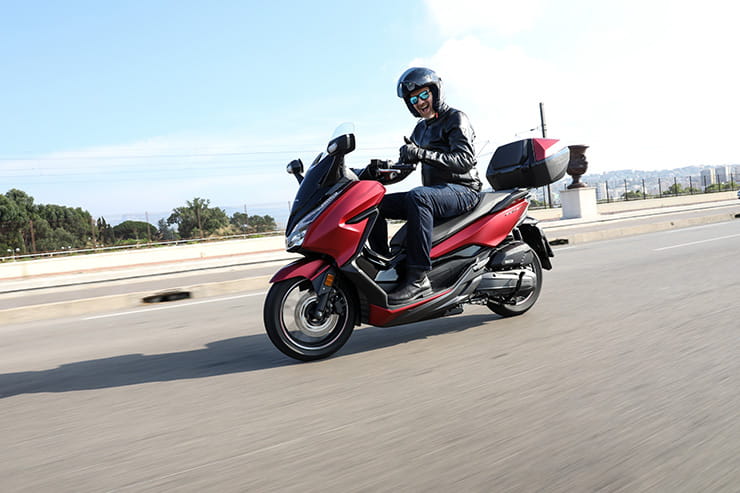 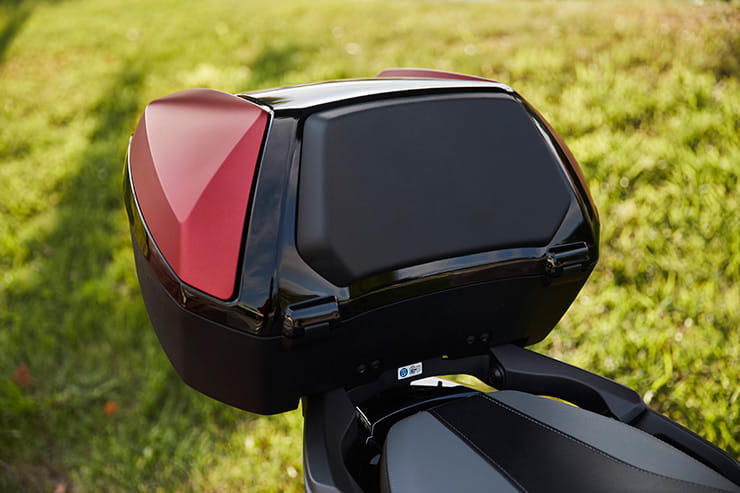 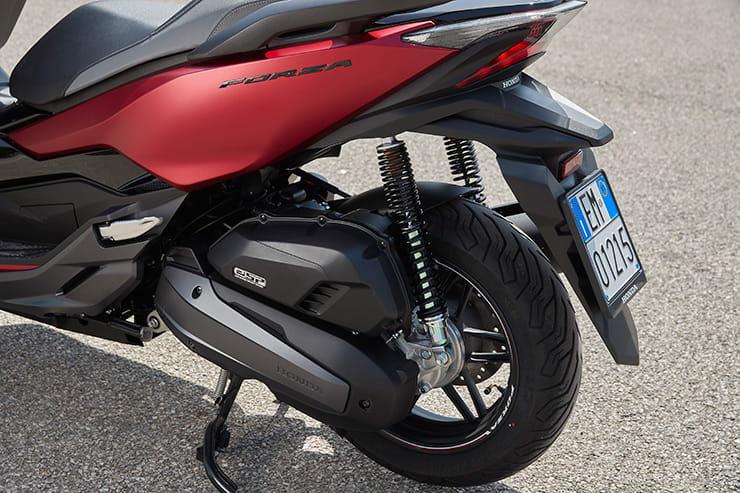 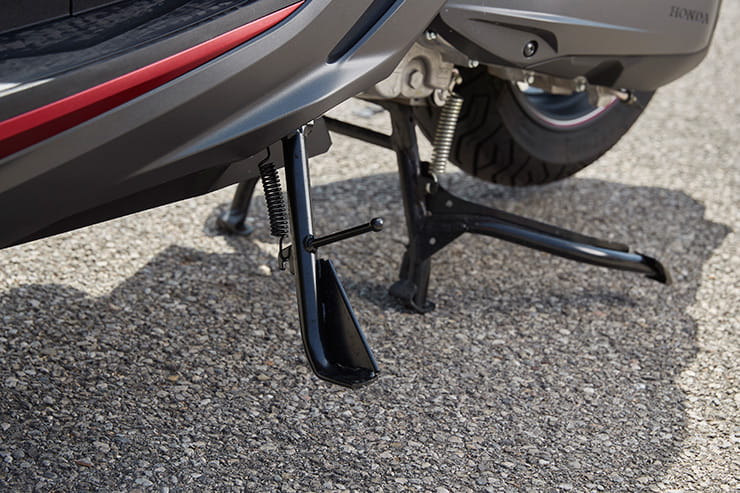