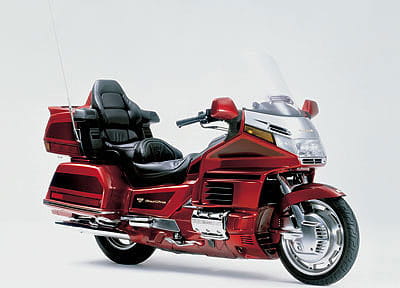 Honda’s Goldwing is the granddaddy of touring comfort. It’s big and it’s expensive and it’s completely over the top – think mobile home on two wheels – but that’s how American’s like it. But then they do have the luxury of vast distances to cover and for this reason ‘God’s Lounger’ is the perfect tool.

Comfort and luxury are the Goldwing’s forte. From the moment you slip effortlessly onto the soft, bum cosseting seat you realise this bike was born to be ridden planet to planet let alone coast to coast. It doesn’t stop at the seat either, the short footboards and bars are designed to prop any sized human in a position that’ll leave you relaxed and fresh for the evening bar.

Pillion gets an equally resplendent eating arrangement with arm rests and backrest sumptuously filled with padding. The pillion could sleep quite easily at the back and for this reason there’s a couple of kilometres of wiring hidden in the Goldwing to deal with the standard sound system and rider-to-pillion communication accessory systems. Radio and optional CD are both top notch with all the usual remote buttons to play with.

With the above in mind you’ll appreciate the chassis and engine are geared around straight lines and heaving bulk. The 1832cc Boxer-six engine delivers some amazing torque and sounds special doing so. It’s not slow from the lights and 85-100mph motorway riding is possible but at the cost of hefty fuel consumption, the average 45-48mpg can dip to 32-35mpg.

The Goldwing is a lazy man’s bike and comes with features rarely seen on a car. The rear suspension can be adjusted at a push of a button and a slow-speed reverse system is also worked by the starter button. Air-con doesn’t figure just yet but easy to reach vents are in place.

Part and parcel of owning a Goldwing is accessorising with the brightest, loudest, most expensive toys. You can even buy trailers to put the barbecue in and the hitches to tow them with! Buying a new Goldwing isn’t cheap but then luxury never has been.

+ points – reliable mile muncher with the back up of refinement.