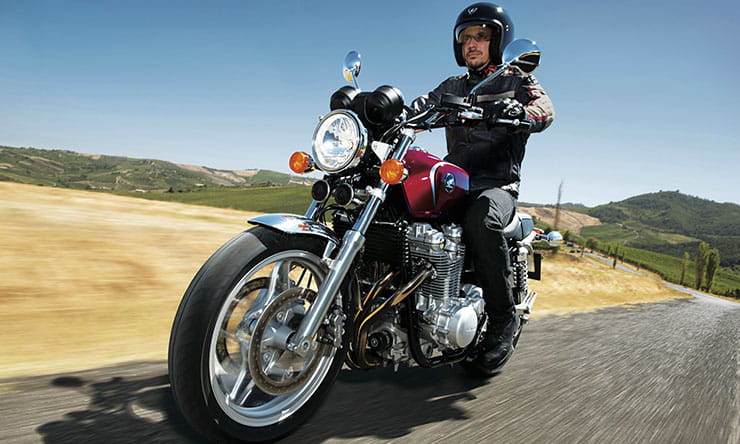 Because retro-styled roadsters don’t get any slicker. All-new air-cooled four pays homage to CB750K and CB900F and is smooth and novice-friendly.

It was a long time coming (Honda originally showed its CB as a show concept in 2008 then, when they first put it into production, only sold it in Australia and the Far East) and, for the most part, it hasn’t quite lived up to expectations. Instead of a rorty, race-inspired beast (Honda also has a much admired RCB-style concept version that has yet to go into production) the CB1100 is a fairly soft, gentle, easy to ride roadster that pleases rather than delivers excitement.

That said, there’s still much to admire. Rather than being a reinvention of any one model, the CB11 draws inspiration both from the original CB750K, the later CB500 and the late ‘70s DOHC CB750/900F. It’s beautifully done, too. The engine, in particular, is a work of metal art, quality throughout is top notch and it’s a genuinely pleasing, easy and useful ride. The motor is sublimely smooth and flexible (if not exactly power-packed at just 80-odd bhp). The handling’s neutral and predictable, the riding position natural and comfortable and overall the CB’s a bike pretty much anyone just get on and ride instantly.

On the downside, the first 2013 examples were also criticized for slightly uninspiring styling, a too-small 14.5 litre fuel tank, unthrilling performance and a premium price.

To their credit, Honda listened to these criticisms and revised the bike significantly the following year (see below).

Ultra-refined and mechanically understressed, there’s nothing that goes wrong with a CB1100 that previous owners haven’t themselves concocted. The air-cooled engine is unburstable and unlikely to have been thrashed while the cycle parts are all proven and familiar. Instead, being a premium, quality, ‘classic’ machine, condition and cosmetics are all. Although by its very nature a CB1100 is unlikely to have either covered great distances or been ridden through winter, it’s important to check all the usual areas for wear (chain, pads, tyres), corrosion (chrome, exhausts, paint chips) or crash damage (bar ends, levers, exhaust, tank etc). Also because of its nature as an unfaired roadster, CBs are more likely than most to have accessories fitted such as small screens or cosmetic add-ons or even aftermarket exhausts. Originality is all, but if you consider certain accessories add value and the original parts are still available, take that into consideration, too.

Following some criticisms, the original 2013 CB1100 was succeeded by an updated CB1100EX for 2014. The biggest visual change was the switch from cast alloy to wire-spoked wheels along with a change from the original’s 4:2:1 exhaust to a double-skinned 4:2:2 system, but there were changes elsewhere as well. Among these was a new, larger, 17.5-litre fuel tank, redesigned seat; side panels and passenger grab rail to suit plus a slightly more raised headlamp position. 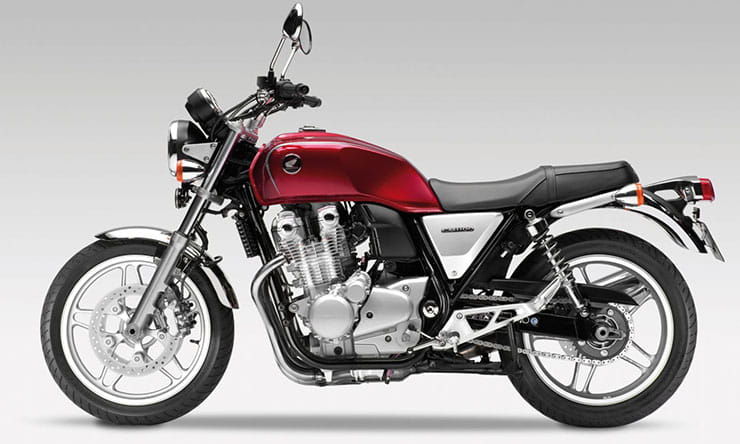 At £10,299 new, the CB1100EX is still a fairly premium-priced bike, but as a used buy, because they’re fairly slow sellers, it can be something of a bargain. We’ve seen virtually mint, low mileage 2013 versions being offered for as little as £6000 while barely used examples of the updated 2014 version can easily be had for under £8k, making both a fairly tempting proposition…