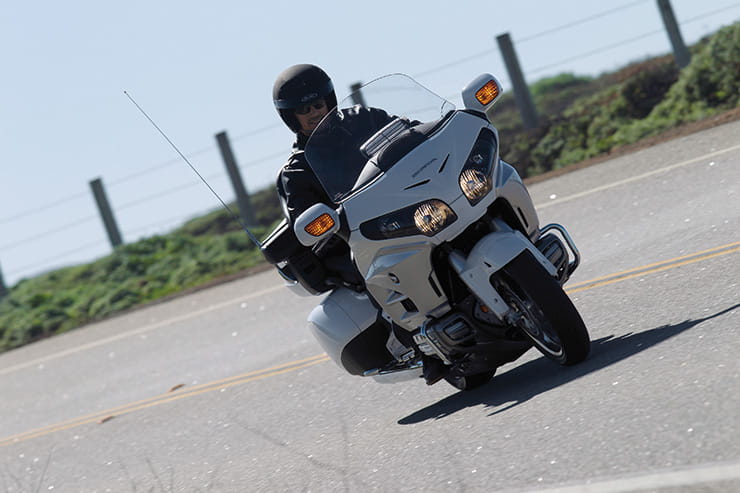 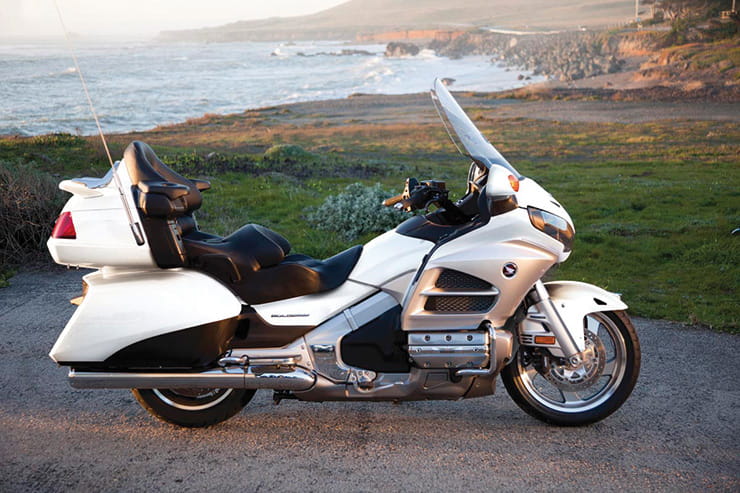 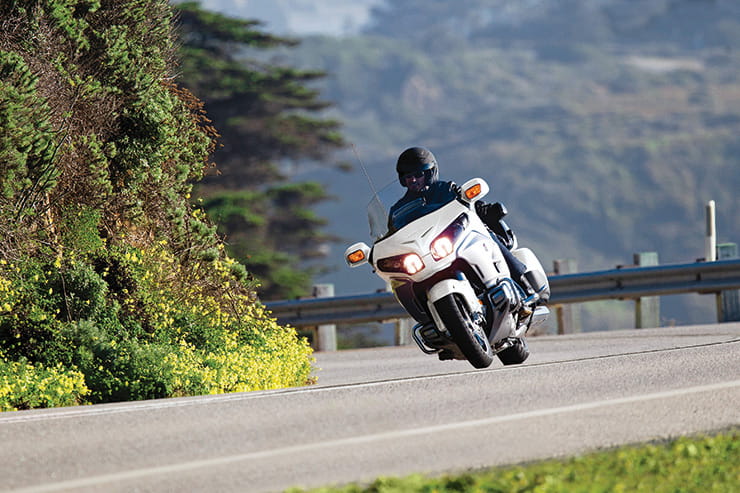 The Gold Wing is, quite simply, a touring institution. Big, comfortable and loaded with all the accessories required to transport you and a pillion across the tarmacked world it is the ultimate in two-wheeled luxury. It’s not to everyone’s tastes, and many unfairly mock the Wing’s physical size, but to its passionate fans the appeal of this wonderful bike, not to mention the activity of the Gold Wing Owners’ Club, opens the doors to a whole new two-wheeled world. Big really can be beautiful and they don’t get much heftier than the Honda Gold Wing. 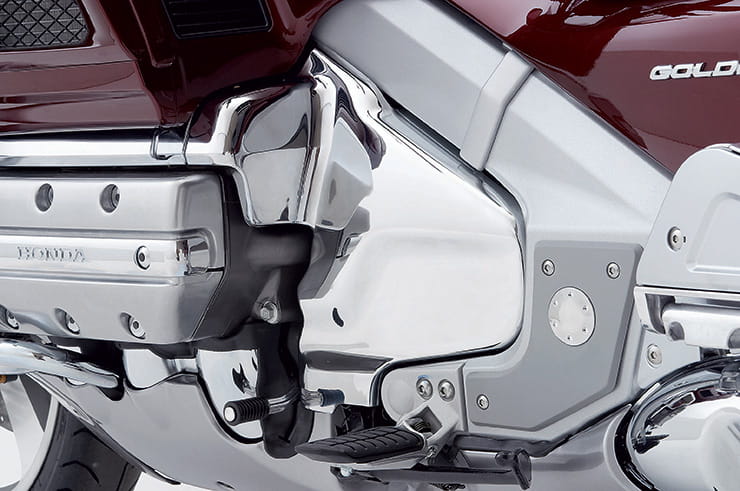 The GL1800 retained the same flat-six style of motor as the GL1500 introduced in 1988, however for a new millennium Honda upped its capacity and performance. Now boosted to 1832cc from 1520cc, the Wing punched out a whopping 123ftlb of torque and also featured a new style of cylinder head. Surprisingly, the Wing only has a single overhead cam, not double, and two valves per cylinder instead of the more common four. This compact head was designed to allow more space for the rider’s feet and also had the added benefit of being able to go 32,000 miles until its valve clearances needed looking at. A new exhaust shed 1.1kg in weight over the previous model while a fuel-injection system with huge 40mm throttle bodies and high-pressure injectors ran two 3-D fuel injection maps and one 3-D ignition map per cylinder to optimise the bike’s fuelling. At its launch, the Wing was one of the ‘cleanest’ bikes on the road in terms of CO, HC and NOx emissions, mainly due to it having to meet stringent US laws, the Wing’s main market. Oddly, however, despite all this tech the Wing only got a five-speed gearbox with the fifth gear described by Honda as an ‘overdrive.’ 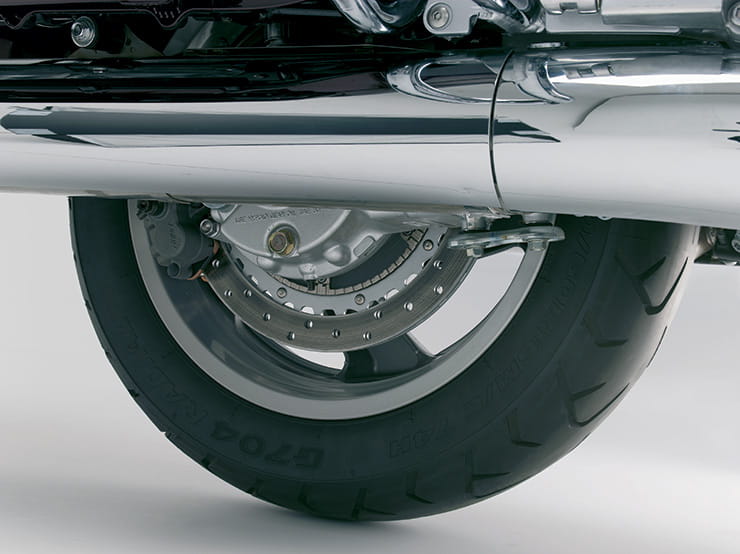 With the flat-six giving the Wing a lovely low centre of gravity, Honda set about upping the bike’s sporting potential in the redesign. To do this they got Masanori Aoki, who also created the CBR400RR and CBR600F3, to design a multi-section dual spar aluminium frame that was over 11kg lighter than the previous model’s steel frame! Using the motor as a stressed member to help further weight loss, the riding position is actually 50mm further forward than before, giving a shorter reach to the bars and more room for the pillion. The new Pro Arm shaft drive system even included a damping system for a smoother ride as well as ease of removing the rear wheel. Well as easy as it can be on such a huge bike!

To carry the heavy Wing, Honda armed it with 45mm forks and a new anti-dive system linked to the bike’s brakes. The shock featured a push-button two-stage preload adjuster with a memory function on easy setting, but that was the only adjustability you got on the Wing. The Wing runs an 18-inch front wheel and 16-inch rear with both made from cast aluminium.

A new anti-dive system that reduced dive under braking was deployed for the first time on the Wing. Using brake fluid pressure generated by the Combined ABS system, a secondary Dual C-ABS cylinder on the left hand fork leg is activated when the brakes are applied, reducing the dive on the forks. According to Honda it enhanced the Wing’s stability at both low and high speeds. The C-ABS has two three-piston calipers at the front with a 296mm disc while the rear also has a three-piston caliper with a 316mm disc. Using the front brake activates the two outer pistons on the right hand caliper and middle piston on the left hand one as well as the two outer pistons on the rear. The rear pedal activates centre piston on the rear, the two outers on the left and the centre piston on the right. A delay valve in the system smoothes the brake’s operation while ABS was included as standard. 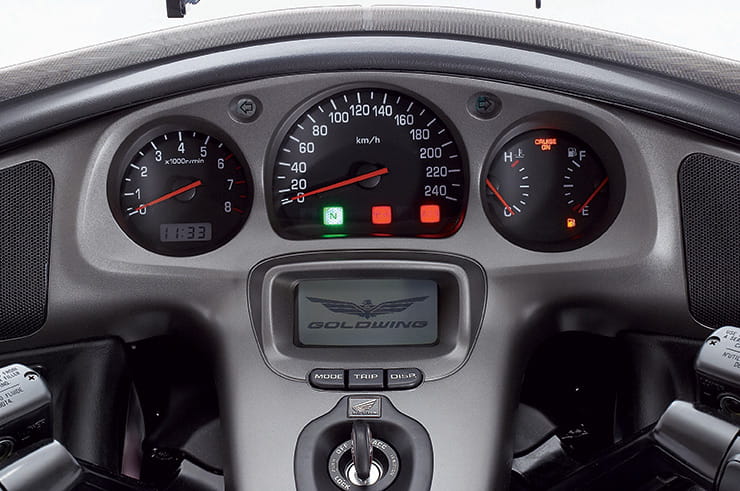 The Wing got ABS as standard as well as an electronic preload adjuster on the shock, LCD display and HISS immobilisor, but that was only the start. An all-new reverse gear could be activated when you needed to back up while cruise control was also standard fitment. The luggage featured remote locking and unlocking and to go alongside the state-of-the-art (in 2001…) 25W stereo system with a radio was an optional extra CD player with a (wait for it…) 6-disc CD-changer! Oh, the indicators are also self-canceling… 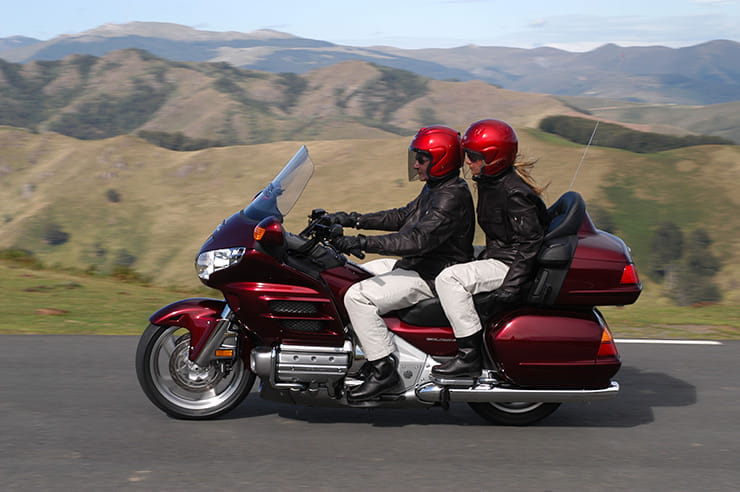 The Wing was designed to be ultra comfortable and that’s exactly what Honda delivered. The low 740mm seat height is reassuring at slow speed as it makes getting both feet on the floor easy, which is necessary on such a heavy bike, and the screen is effective at deflecting the wind. It’s a comfortable place to spend time, but some riders complain that the seat gives them backache. If that sounds like you, there are optional accessory back rests.

Sit back, listen to the music and enjoy the ride. Pillions love the Wing as the top box is the perfect backrest… 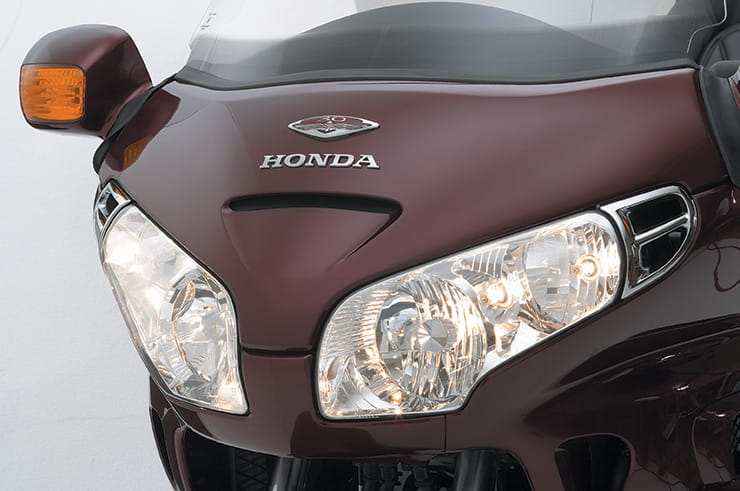 Comfort and luxury are the Gold Wing’s forte. From the moment you slip effortlessly onto the soft, bum cosseting seat you realise this bike was born to be ridden planet to planet let alone coast to coast. It doesn’t stop at the seat either, the short footboards and bars are designed to prop any sized human in a position that’ll leave you relaxed and fresh for the evening bar.

Pillion gets an equally resplendent eating arrangement with arm rests and backrest sumptuously filled with padding. The pillion could sleep quite easily at the back and for this reason there’s a couple of miles of wiring hidden in the Gold Wing to deal with the standard sound system and rider-to-pillion communication accessory systems. Radio and optional CD are both top notch with all the usual remote buttons to play with.

With the above in mind you’ll appreciate the chassis and engine are geared around straight lines and heaving bulk. The 1832cc boxer-six engine delivers some amazing torque and sounds special doing so. It’s not slow from the lights and 85-100mph motorway riding is possible but at the cost of hefty fuel consumption, the average 45-48mpg can dip to 32-35mpg.

The Gold Wing is a lazy man’s bike and comes with features rarely seen on a car. The rear suspension can be adjusted at a push of a button and a slow-speed reverse system is also worked by the starter button. Air-con doesn’t figure just yet but easy to reach vents are in place. Buying a Gold Wing isn’t cheap, but then luxury never has been.

The Gold Wing is a big old beast and at low speed it can be quite intimidating, especially when loaded up with a pillion and luggage. But get it rolling and the Wing delivers a riding experience like no other. This is a bike you just have to experience once in your life as it is a fabulous way to cover miles in total bliss.

That flat-six makes the miles melt away without the slightest hint of an irritating vibration while the seating position is beautiful for both a rider and pillion. True, filtering is a bit tricky due to the Wing’s size, and crossing a wet campsite field is scary, but this is a bike designed for the open road and get it in its element and the Wing is a joy. True there is a new model that adds a bit of sparkle through DCT and an odd front end, as well as flash electronics, but in all honesty a Wing never dates and the older GL1800 still ticks every touring box. 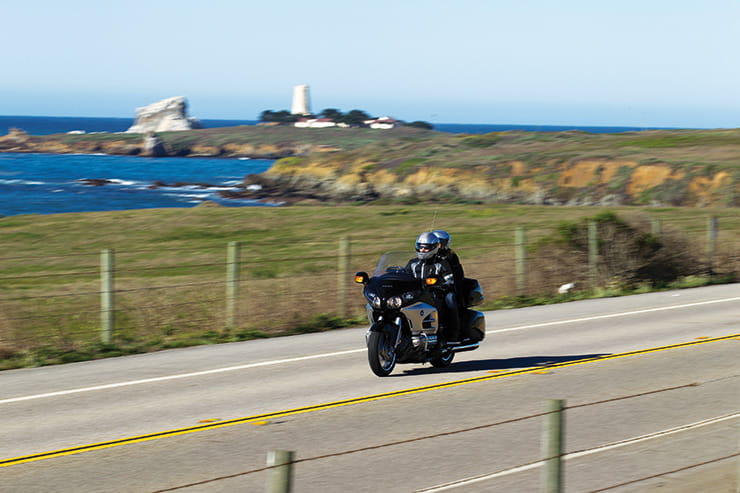 The Gold Wing’s flat six engine is extremely under-stressed and mileage isn’t something to be afraid of when buying used as long as the bike has been serviced regularly. Honda state 4,000-mile service intervals with a slightly more in depth one at 8000 miles and the valve clearances checked at a massive 32,000 miles. Most owners stick to this so always insist on a good service history.

The Wing is generally very well built but it does have a few niggles. The exhaust collector box likes to rust, so check this area for any leaks, and watch out for the brakes. Brake calipers can bind on and due to the covers, it isn’t uncommon for brake pads to wear beyond their limits without being noticed, potentially scoring the discs. Always give the brake system a good visual inspection. Also, check tyre wear as again, it isn’t uncommon for the tucked away rear tyre’s wear to be missed.

The finish on the GL1800 isn’t great where Honda have used aluminium parts and owners moan that corrosion can be rife if the metal isn’t properly protected in winter. And then there is the wiring loom…

If an inexperienced mechanic has worked on a Wing the wiring loom can start to throw up issues if it hasn’t been correctly replaced. Just replacing the air filter requires removing the dash, so electrical faults aren’t uncommon and therefore always check all the systems work. Also, watch out for a dodgy alternator as a new one costs over £700 and they do like to pack up. Finally, be aware of recalls as the Gold Wing has been recalled a few times (check on the Government’s VOSA website), most recently for an airbag fault.

The GL1800 replaced the GL1500 and was an all-new machine with a bigger engine and loads of tech. In 2006 the world’s first production motorcycle air bag was fitted to a Wing (heated seats also arrived) and in 2012 the bike received slight styling updates, larger panniers, a new sound system with six-speakers and CBS with ABS. It was replaced in 2018 by the all-new Gold Wing, which comes with DCT as an option and a funny front end. 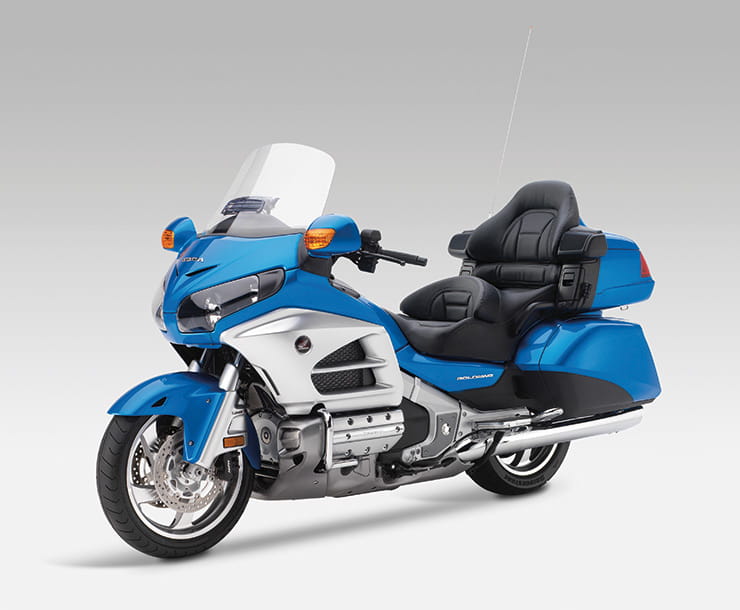