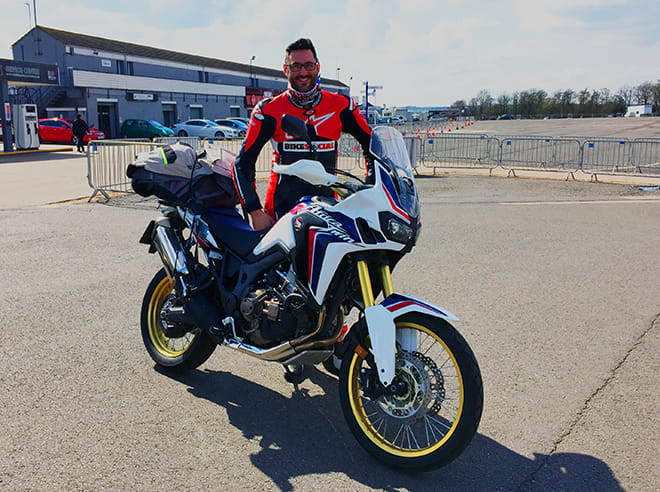 “Have a go on this”, says the slightly drunk man standing outside his chalet at an MCN Butlins event about ten years ago.” Ever since I was a kid on bicycles, if someone asks me to ride something I’ll generally have a go.

To all intents and purposes it looks like an old 1976 Honda CB750, except there’s one major difference. This is a CB750A Hondamatic, and the A stands for automatic. Push a button, engage drive and off it goes, no need to change gear, pull in a clutch, or use unnecessary energy lifting your left foot up and down. I wasn’t sure about it, but it shows just how long Honda have been badgering away at bikes that don’t require the rider to change gear themselves. In 1976 it was a revelation.

Technology has moved on a lot in almost fourty years, and the latest dual-clutch transmission system on the new CRF1000L Africa Twin DCT moves the game on again.

In its Honda Racing colours paint scheme complete with blue bar ends, gold wheels, gold handlebars and that magnesium colouring on the engine cases, along with its purposeful, tall and narrow stance, the Africa Twin looks every bit full-factory.

Parked at Donington Park where I was last week for the Honda Ron Haslam Race School it’s drawing a crowd among the sports bikes parked in the paddock. Most people haven’t seen one in the metal yet, despite it out-selling the king of all adventure bikes – the BMW R1200GS –  in the first part of this year at least.

We’ve got the Africa Twin on long-term test at Bike Social this year and the bike has whisked me away with an overnight bag full of kit strapped to the back for a meal with Honda and then a celebration of 20 year’s of Ron Haslam’s school.

Two blokes who have just finished the school approach me as I leave and they can’t get their heads around the DCT system. Just flick a button on the right hand bar, click it into drive or hold down for one of the three sports modes and then pull away.

The buttons take a bit of getting used to for the first hour, and I still occasionally change up a gear or turn the traction control off when reaching for the headlamp flasher, but it soon becomes natural.

Once you’re used to it, just engage D and go. The gear change is smooth, the clunking that used to make the older version on the Crosstourer annoying is all but gone, and it’s one of the most relaxing engines you could ever ride for over a decent distance.

The engine is a 93.8bhp parallel twin. Never exciting, never arm-wrenching but the Africa Twin delivers its power and flat torque curve in such a way that it’s always where you need it. 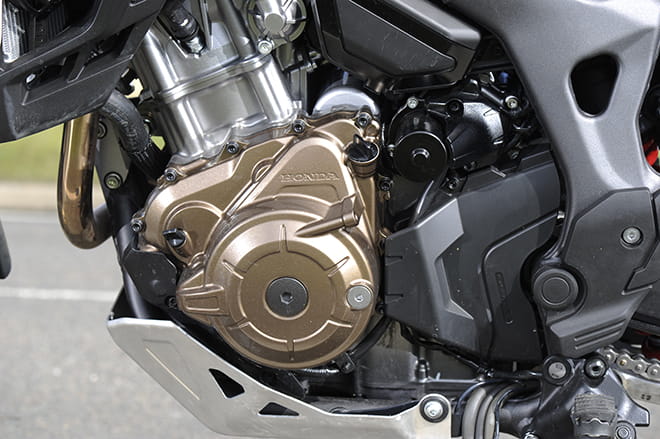 With a few meetings to attend, followed by a run up to Donington Park, the bike was comfortable over 120 miles, there are tons of bungee points to hook a soft bag on to too, making it easy to load. We’re looking at getting a top box, side panniers and heated grips too to improve its touring qualities further.

But on a motorway, at speed, the tiny screen is good, the seat is on the harder side of soft, but comfortable and it’s all well, very relaxing to ride.

It will ride faster of course. Part of the back-road route to Donington Park is on one of the best roads within a 50-mile radius of where I live, let’s say its somewhere near Melton Mowbray. 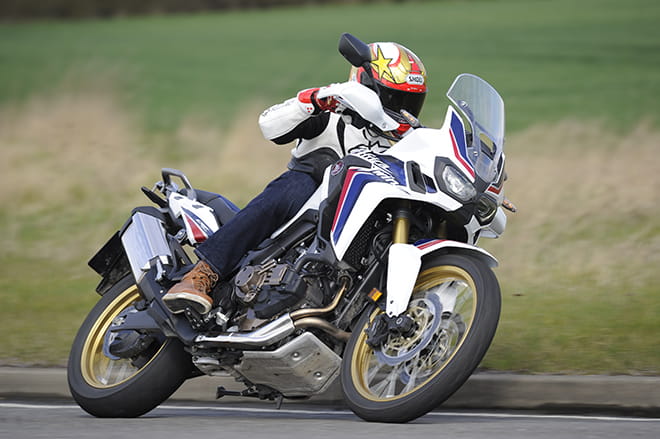 When you do get on it you can feel that 21-inch front wheel needing to tell you where the limit is. With a bag on the bike sits down a touch under power but an easily crankable pre-load adjuster sorts that with a few more clicks, and though the forks are soft for their true adventure all-round use, they’re well-damped.

It may be in my head but I’m sure that a Japanese engineer told me on the bike’s launch because the DCT system weighs 10kg more than the standard bike that the forks have different settings too.

But we didn’t choose this bike to run this year because it’s fast. It’s the kind of bike that you can do anything on. A mobile office, a bike that can take you across desserts, a Sunday plodder, a scratcher, a tourer. An Africa Twin then, a grown-up luxury version of the old 750 in terms of what it can do and where it can go. Some of which we’ll be putting the bike through to keep you updated on it progress this year.

The DCT system may not be perfect, occasionally it hangs on to gears when you think you’d ordinarily want to change gear, or doesn’t change down exactly when you want. But most of the time it’s fantastic. And if you want then you can always use the + and – buttons to do it yourself. I’ve never thought that changing gear is a hassle, but the Africa Twin makes everything so relaxing that for me the DCT makes the bike what it is. It’s a Hondamatic for 2016 with all the trimmings and it’s great.