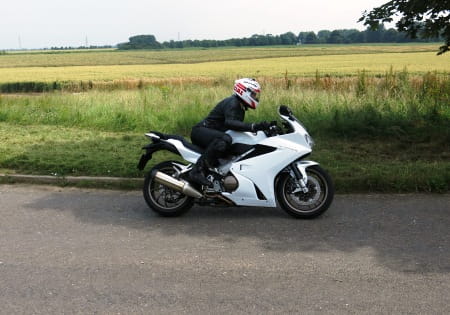 But then the BMW GS hit hard, and in the UK we finally caught up with what the rest of Europe had known for years and the adventure bike became the sports tourer of choice. Capable of riding down a gravel road without crashing, adventure bikes are sports tourers in a different dress, but with that slightly more manly, edgy all-conquering appearance. Sports tourer man rides to the South of France on the motorway, adventure man stops in a few gravel car parks and does skids. Or at least looks like he does. Occasionally.

The new 800cc V4-powered VFR is proof that bikes get better the more miles you ride them. I really didn’t like it much at first, yet as a rider have always appreciated what the VFR is and stands for. Over the years I’ve toured them to Switzerland, ridden them two-up to the Lakes,  even raced one in a club race at Cadwell Park, but at first couldn’t get this one at all. Too fat, too slow, too old-fashioned I thought.

“What’s it like then?” everyone back at Bike Social asked me after my first 100-mile stint on the new VFR. Me: “Er, it’s a bit like white goods. It’s like buying a decent Fridge Freezer. Does everything well, but it’s quite dull and uninspiring. Feels like it’s from another generation, but with a tighter chassis and some bolted on things like traction control.” 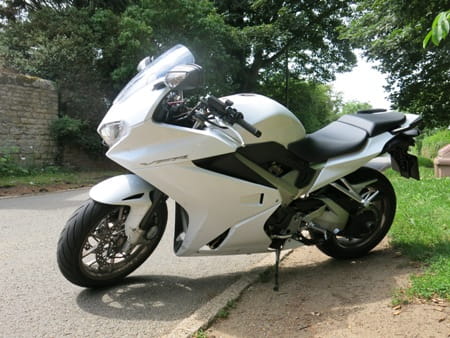 But then it all changed. A night ride of 120 miles from Bike Night in Barton on Humber changed my mind completely. The headlight is incredible, for one. A steady, white beam of light that lights two lanes but never gets you flashed from oncoming cars, and allows you to cover serious ground fast, at night. The heated grips are ace when the temperature drops, the seat height is adjustable. It all seems to start making sense. Cover ground very quickly and easily it says to you.

Then there’s the motor. It needs revving, and feels like it could do with another 30bhp, but the more you get used to it, the more you realise it’s a brilliant bike. Never inspiring. Never ‘oh my god it’s incredible’. Just an absolutely brilliant bike that’s comfortable, handles well, stops well and makes the glorious Honda V4 sound. The riding position is sports tourer perfection, it stops, goes and turns all in a fairly uneventful way, but is brilliant all at the same time.

It’s immensely practical. The screen was a bit too short for me so buffered my head unless I’m crouched slightly, but there’s a big pillion seat, proper 150-mile tank range ability, great comfort, loads of places to hang bags off, fantastic mirrors, pipes that don’t burn panniers (like the old one did), and its style has been brought kicking and screaming into 2014 with LED headlamps. It works and it’s 7kg lighter than the old VFR800. Interestingly that’s one kilo heavier than the 238kg (both bikes weighed in fuelled and ready to ride) that BMW claims for its R1200GS, but you’d never know it. 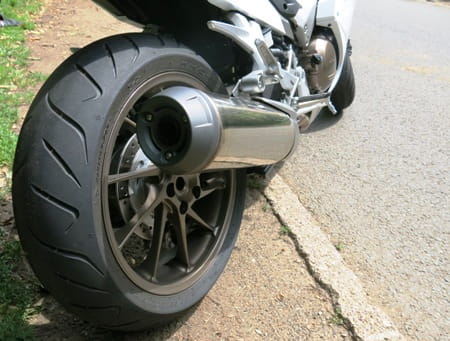 Niggles? The traction control switch still looks like the switch has been bolted on at the last minute. It feels old school technology when it chimes in too. It takes what feels seconds to dial the power back in when the traction control has been activated, flashing orange lights and killing the power when it comes in. It only came in because I made it, ie, gassed it hard when leant over to entice a spin, and tried to wheelie when coming off a roundabout. But in reality you don’t really need it.

I can never, ever remember thinking I need traction control on a VFR of old (I’ve tested every model including that annoying first V-Tec bike which didn’t know which power band it wanted to be in at cruising/motorway speed. This is spot-on. It needs revving but is docile in town and entertaining when you rev it. Sounds good too, as long as you don’t wear ear plugs because then it sounds too muffled.

It’s a shame the traction control system isn’t as good as the stuff that BMW, Triumph and Ducati are fitting to bikes but with 104.4bhp you really don’t need it. The suspension works well, the fuelling is good, the connection to the throttle from the rider’s hand is direct, the tyres give enough grip and generally unless you’re riding on ice I can’t see why it needs traction control, personally.

Then there’s the comedy Lego switchgear with the horn where the indicators should be so I kept honking people instead of indicating. And in all my fiddling with buttons I couldn’t find a clock. No clock means pulling over to check your phone to see how late or early you’re going to be, and that’s just annoying. Unless anyone can tell me any different and I haven’t been able to find it? 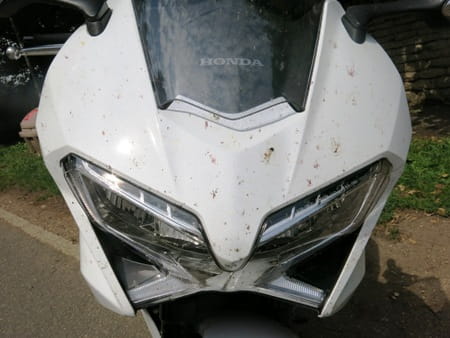 Nothing about it is outstanding. It comes on sports touring sped Dunlop D222 tyres for instance. Yet despite fairly vague feedback from the tyres, once you’re used to it you can really throw the bike around. It handles sublimely for a sports tourer. It’s keen to turn but never unstable and can carry serious lean before the long footrest ‘lean angle indicators’ touch down. I never touched them down on the road, and I was trying pretty hard.

I was sceptical when Honda redesigned the VFR, I was sceptical after the first ride on it too. But by the time I’d done 500 miles on it I could see a corner of my garage where the VFR could fit quite nicely. Maybe not in white though, too many people seem to think you’re a bike cop.

The world of sports tourer may have been taken over by modern adventure bikes, but there’s still space for something that looks like a slightly blown-out sports bike. A bit like the £10,499 VFR then. 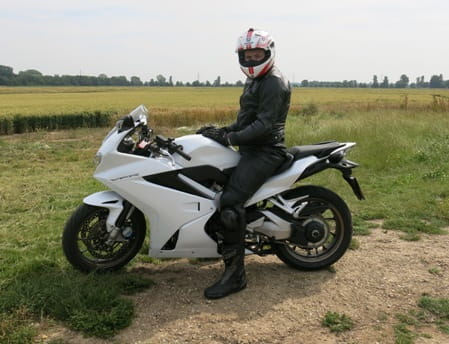 Sensible fun: just like the nerdy girl at school who’s organised, efficient and wouldn’t dream of deviating from the regulations but come the weekend her hair is down and she's last one off the dance floor, the VFR is equally nerdy in its ability to do everything well; tame enough to use comfortably in any town or motorway-based situation yet has an interesting side if you roll back the throttle and escape to the countryside.

Before firing it up I knew it was going to do everything well and true enough that is the case. You search for something that is exceptional but the VFR keeps you guessing. You continue to ride, mile-upon-mile thinking what makes this bike so popular - does it do something else that I should know about? Perhaps there’s a push-to-pass button or a secret compartment with a never-ending supply of Lion bars. Of course there’s not but the more miles you chomp, the more comfortable you become on the VFR. It just fits, it gets better and it goes. Including a fuel-stop I covered 240 miles in one sitting and would have had no issue doing it all again straight-away, after a cuppa of course.

Comfortable at motorway cruising speed, a decent enough screen, super gearbox and an engine note from the V4 via its old-school side exhaust which tempts no-ear plugs when not cruising. For me, the handling is one of its stronger points but 104.5bhp is not going to wreak havoc with your insides, with a magic wand I’d have preferred a dialled-down 1,000cc motor from the Fireblade perhaps. Then again, Honda has customers for the sports-tourer side of the market and they seek 'Sensible Fun'.

Looking for bike insurance? Get a Honda motorcycle insurance quote with Bennetts today!