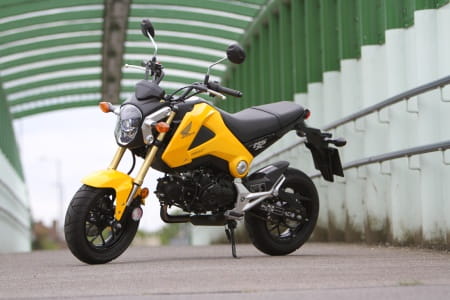 Way back in 1963 Honda identified a niche and released their timeless Monkey bike; even now it’s still funkier than a 70’s discotheque so it’s not surprising that it became a cult classic. Half a century later this new Honda MSX125 brings the world of smaller machines kicking and screaming into the 21st century.

The Mini Street X-treme 125, or MSX125 for short (and let’s face it it’s not very tall) is a perfectly formed, well designed and superbly built machine with just enough street cred to get it noticed. The bike is manufactured by Honda in Thailand (not that that’s a problem) and is exquisite to look at. Plus of course it wears all the right goodies to make it more than just a good looker outside the local chippy! For starters the 125cc two-valve air-cooled engine sups fuel through a PGM-FI unit, it’s a four speed motor, running a 15T sprocket and 34T final drive to make it feel lively out on the mean streets. The steel mono-backbone chassis hides the electrical gubbins to help the aesthetics and as you’d expect, seat height is dwarf like at 765mm, which is low enough to make Grumpy Happy. Components haven’t been sacrificed either, it has 31mm USD forks and a rear monoshock, braking is taken care of by a dual piston front and single piston rear, whilst the 12” alloys wear sticky Vee Rubber. It’s also got a stylish LCD dash with tacho, dual trips, fuel gauge and clock, projector headlight (with subtle blue halo to make it stand out) and the indicators are also utilised as front running lights for added visibility, which is probably wise on a bike that’s lower than a snake’s belly. The bike may be small but it’s certainly big on features. So what’s it like to ride then?

When you see the MSX125 up close for the first time you’re instantly impressed with the styling, it’s the perfect bike for a youngster if he, or she wants to stand out from the crowd. The second thought that comes into your head is ‘Blimey it’s small’. So when the man from Honda gives you directions that include doing a bit of the notorious M25 you’re kind of a little wary. Any concerns quickly evaporate though once you’re on it. The engine sounds quite good through the big bore exhaust and the gearbox and clutch are nice and light. Even though it’s tiny the seating position isn’t cramped, although the seat itself is a tad hard. The engine packs a punch, it’s a lively lump and will rev to the 8500rpm redline. You quickly realise it’s a great little town tool, it’ll turn on a sixpence, filter through the tightest of gaps and you’ll outgun most cars from the lights. The engine really did impress me, the four-speed box is Honda slick and the ratios perfectly spaced so it moves along quite nicely and it can get around corners well enough, thanks to that sticky rubber. Having ridden plenty of 125cc four strokes it came as a nice surprise to get a lively engine where you feel like you can filter to the front of a queue and leave everybody behind quite comfortably when the lights go green. I reckon the MSX suffers from small man syndrome and needs to show the world it’s hard. Top speed is an indicated 67mph, although my GPS put it at a more realistic 64, still not bad, although a headwind saps power quite a bit. On the motorway the bike felt stable and not too slow, although I wouldn’t fancy doing more than a few junctions on it.

Good things come in small packages and if you don’t believe me you must be Dopey.  The MSX125 is the perfect bike for a teenager with attitude, give one a try, you’ll be impressed.

- points: Not good for longer distances, not much room for Snow White on the back