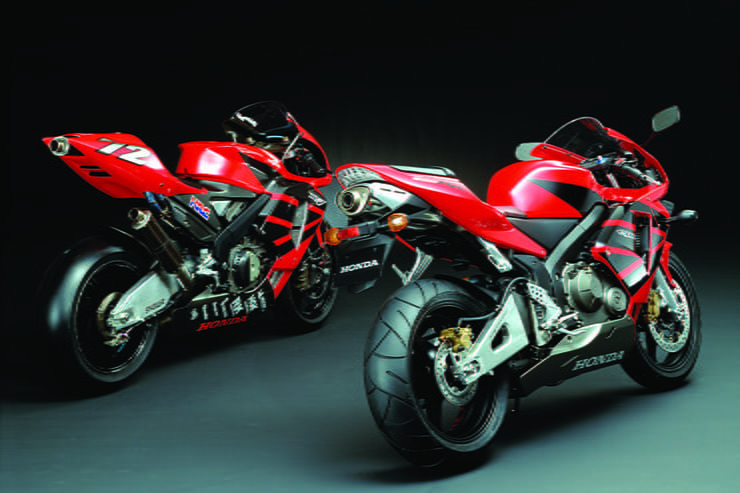 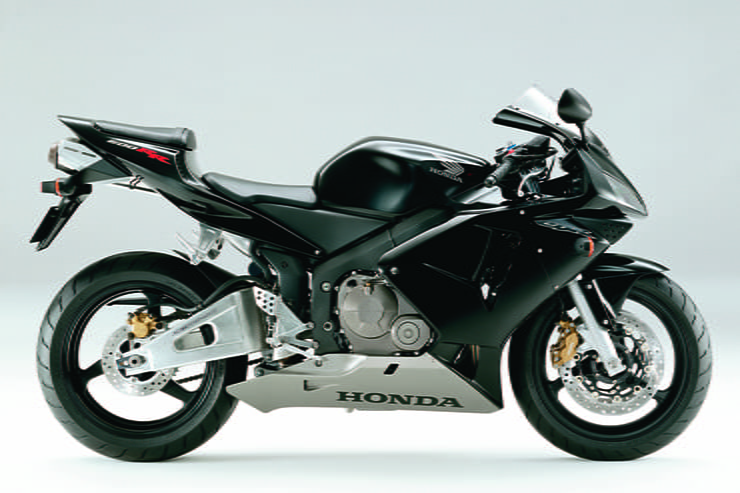 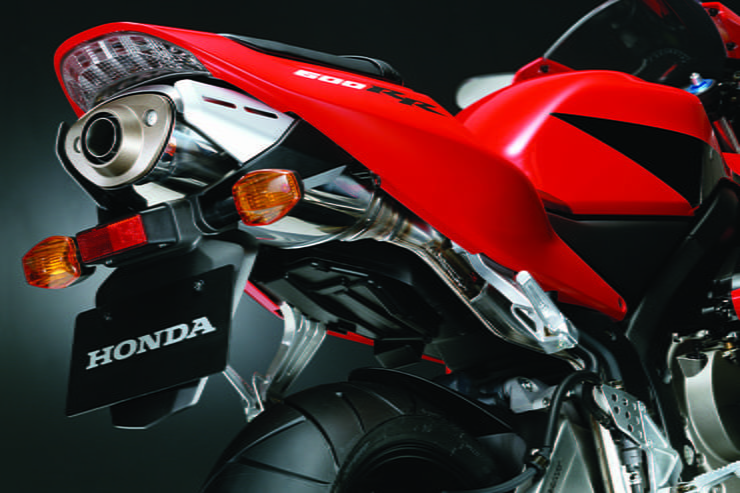 Make no mistake, the Honda CBR600RR is a very extreme track-focused machine and while this makes it incredibly appealing to some, to others it will be a complete turn-off. So if you are looking at the images and thinking ‘those clip-ons look a bit low’ or ‘how will the wife fit on the back?’ it’s probably not worth your time reading on. However if you are looking at the pictures and thinking ‘I bet that’s awesome around Cadwell Park’ then read on and prepare for an evening searching through the classified ads looking for a cheap one as the CBR600RR is simply brilliant at what it was designed to do. And that is lap a race track very, very quickly.

The first of the ‘full-on’ CBR models, the RR owes much of its design to Honda’s RC211V MotoGP bike. As well as boasting a hollow die-cast frame, the RR has the same style of Unit Pro-Link swingarm as the RCV and even comes with an underseat pipe and almost identical styling. Ok, it lacks radial brakes and inverted forks (these arrived in the 2005 update) but in terms of track-winning chassis components the RR has it all. And that also includes a torturously cramped riding position, next to no pillion provisions and a seat with little in the way of padding… But what do you expect on a track-focused supersport bike? An ethos that extends to its motor.

The RR’s inline four may make an impressive claimed 117bhp, but this is a rev-happy screamer and has very little in the way of mid-range. Again, some riders will love the fact you have to wring the R’s neck to get it going as this makes for a thrilling riding experience, but others will be left frustrated at its totally gutless nature. It’s horses for courses, if you want a track refugee in your garage there are compromises to be made. And that’s the key to CBR600RR ownership.

Don’t buy an RR expecting it to be a relaxing machine to ride – it isn’t. Buy one because you want a full-on track missile that will destroy corners and relish being revved to within an inch of its life. If you accept this you will absolutely love the CBR600R, however if you think you are buying a faster version of the do-it-all CBR600F, you will be in for an unpleasant surprise… 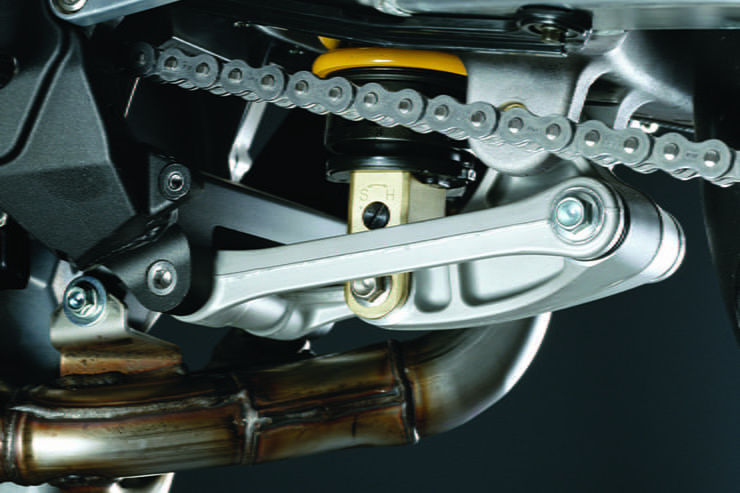 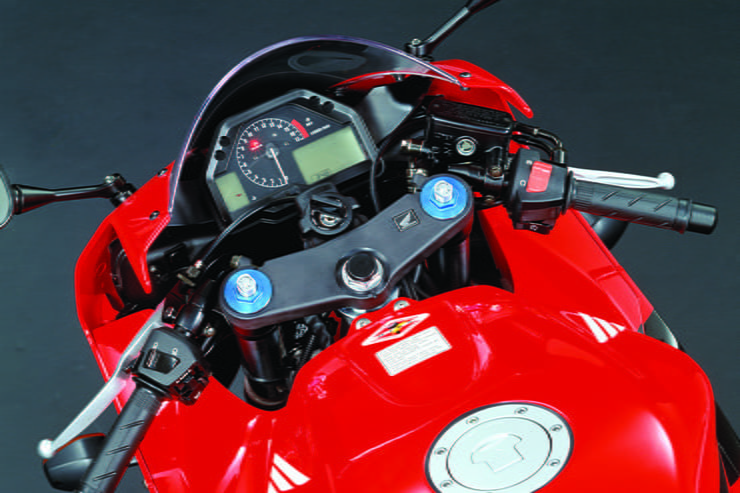 Buying a Honda CBR600RR can be a little bit of a lottery as while in general it is a very well built machine, it is also one that by its very nature gets thrashed. And also taken on a fair few trackdays. So what do you need to look out for?

The first thing is to get a clue as to its previous life. Inspect the bike for signs of track use such as fried tyres, scraped hero blobs, evidence of multiple tyres changes (lots of tyre weight residue) and the obvious crash damage. Be extra wary of aftermarket fairings and in a good light, see if any of its fairing panels are slightly different colours as that may hint at them being replaced. And speak to the owner (if it is a private sale) to get a handle on what they are like. Are they a track nut or a sunny Sunday road rider? You know the one you want to buy from!

In terms of the RR’s motor, you need to watch out for any signs of it burning oil as the original generation was a touch thirsty on the black gold. Look for smoke on start-up and also check the oil level using the window. The engine needs its valve clearances checked at 16,000-miles, which is a big bill as they are a nightmare to get to, and this cost goes up dramatically if they actually need re-shimming. The gearbox is strong, but quickshifters can cause excessive wear so be cautious of a bike with one fitted, and also watch out for any warning lights on the dash as electrical items such as cam sensors, gear position sensors etc are remarkably costly to replace. Speaking of the dash…

Oddly, the rubber buttons on the RR’s dash have a habit of perishing and falling out, which can lead to water getting in there and a costly fault developing. While you are looking at the chassis, always check the bearings/suspension linkages for play and the suspension for leaks but also check out the rear wheel/hub. Corrosion between the rear wheel and brake disc can lead to distortion and if the bike is left standing rust can build up within the wheel’s internal spacer, causing the axel to seize in place. A good few hits with a hammer generally frees it, but then you will need to replace all four (there are two in the sprocket carrier and two in the wheel) bearings.

Aftermarket accessories are very common on the RR and loud pipes and rearsets, tail tidies, screens etc are pretty much par for the course. If a pipe is fitted, ensure the bike also has an aftermarket fuelling module as it will need a bit of a tweak to stop it running lean. And also consider if you are planning on taking the bike on track as you will need a baffle due to noise limits. 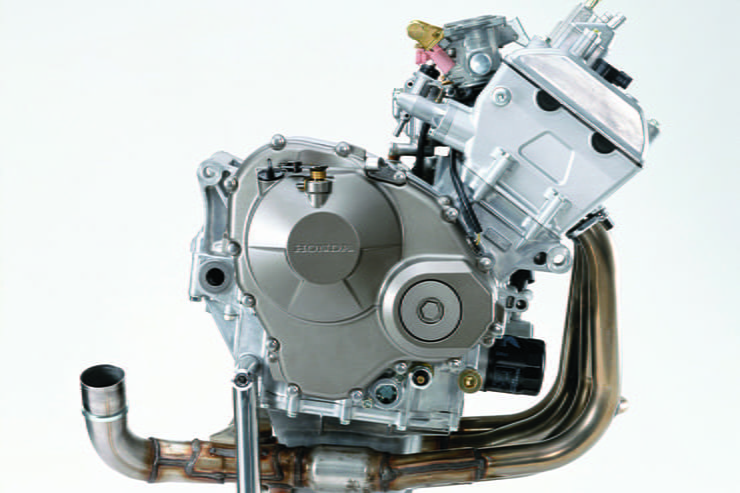 The first generation of CBR600RR was updated in 2005 when Honda armed it with the latest ‘must have’ accessory of radial brake calipers alongside inverted forks and slight engine modification aimed at boosting its mid-range. Although not dramatically different, the updates do make the second generation feel a bit less rev-happy and everyone loves a radial brake… The CBR was updated again in 2007 with a new look and new motor. Easily identified by its large central air-scoop, the 2007-2012 model features a physically smaller engine with lighter internals to allow it to pick up revs faster and also produce some much-needed mid-range. C-ABS arrived on this generation in 2009. 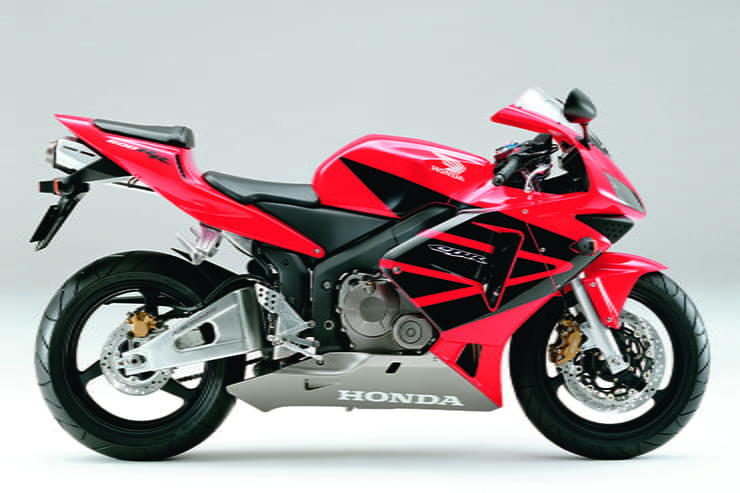 The RR is a popular bike with both road and race fans and as such there are a lot of forums dedicate to it. Log onto www.600rr.net or www.cbrforum.com for like-minded owners or if you want some serious parts or tuning advice, drop Ten Kate a line at www.tenkateracing.com