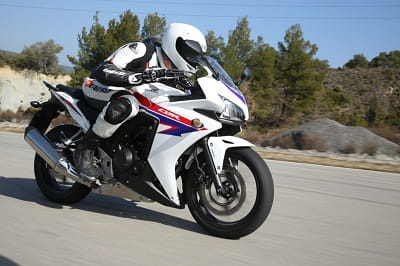 It’s no coincidence that if you look at the new CBR500R quickly or half close your eyes, from most angles it could almost be a Fireblade. Especially in that white paint scheme with the red and blue stripes. That racy image is just what Honda intended, having given the sportiest of their new trio of 471cc parallel twins not one but two Rs in its name.

In reality the CBR500R is not a small-bore superbike, it’s the sportiest of Honda’s new range of budget twins, sitting alongside the naked CB500F and adventure-style CB500X. And it’s only marginally the sportiest at that, given that all three models share the same 47bhp engine and most other parts, and are built in Thailand to help reduce costs.

The CBR’s performance might not match its image, but it’s an excellent bike all the same. Along with the full fairing it gets slightly lower and more forward set bars than the CB500F. And there’s enough performance to live up to the fairly sporty yet roomy riding position. The dohc twin is quick enough to be fun and reasonably flexible. 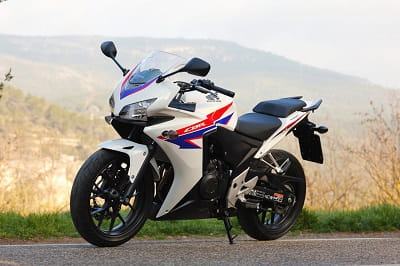 It revs happily through the slick six-speed gearbox, staying pretty smooth, cruising at 80mph plus or heading on towards a top speed of about 110mph. The fairing and low screen give some useful wind protection. And there’s enough low-rev response to make the Honda easy to ride, helped by its slim build, light weight (194kg) and excellent fuelling.

Handling gets good marks, too, provided you don’t expect this R-bike to corner like a Fireblade. The non-adjustable forks aren’t up to that, but at a good roadgoing pace the steel-framed Honda’s light, neutral steering makes it fun and rewarding to ride. Its front brake blend of big single disc and twin-pot caliper has plenty of bite, and is ably backed up by a rear disc and excellent ABS system, plus slim but reasonably grippy Metzeler Z8 rubber.

This CBR is a sensible bike not a superbike when it comes to running costs, too. I managed 55mpg rather than the 75mpg claimed by Honda, but that still means it should be cheap to run. And its best feature is arguably the price, because £4950 — that’s £300 more than the naked CB500F — is excellent value for such a stylish and capable machine. 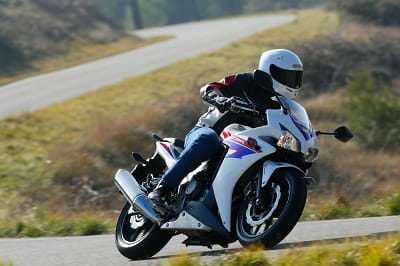 - Points — Chassis limitations start to show when pace hots up