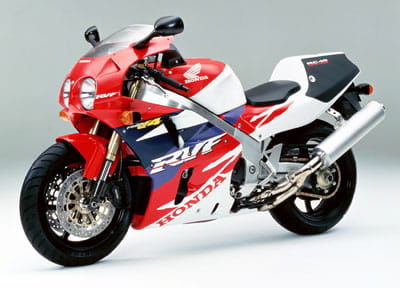 Honda’s RC designated bikes give rise to the belief that they are handcrafted machines essentially untouchable by similar capacity machines produced by the competition. The RC30 was predecessor to the RC45 and held that belief. Quite what happened to the RC45 nobody is really sure. Yes, it’s a technical marvel as befits a ready to race bike designed by Honda’s race engineers, but it wasn’t that good…

Surprisingly the RC45 could only muster 118bhp despite being loaded in standard trim and came with a serious and very tuneable fuel injection system instead of the RC30’s carb set-up. Never mind, it sold despite having a class leading, wallet destroying price tag of just over £15k and had external parts from other Honda models, such as mirrors from a CBR600… something so elite and special should never have.

But then the RC45 was designed to be raced and Honda engineers took it upon themselves to provide the RC45 in a basic spec and anyone who wanted to go racing would need money, big money to get it to work well enough to win. Unfortunately for privateers they didn’t have the finances or factory support and RC45 race wins were few and far between across the planet.

On the road the RC45 didn’t make any big shakes when compared to Kawasaki and Suzuki rivals. Yes, it was plush suspension. Yes, the 749.2cc engine was creamy smooth as expected of a Honda V4, and handling was surefooted and safe but didn’t ignite fireworks in anyone’s pants. Some UK press actually dared to berate the RC45 by hinting it was a waste of money.

Stunning to look at and made even shinier in peoples’ eyes because of the diluted HRC (Honda Racing Corporation) connection, the RC45 carried a lot of kudos back then – and still does today. Second-hand prices are pushing heavy five-figure numbers mainly because of its rarity and what it stands for, and not for how good it wasn’t!

+ points – it’s a Honda race bike with a lot of heritage. Technically a brilliant example of Honda’s engineering

- points – wasn’t as good as it should’ve been. Overpriced then and with ridiculously overinflated values now