The £5,100 BMW G310GS, £5,149 Kawasaki Versys-X 300 and £4,599 Suzuki V-Strom 250 are all light, more manageable bikes: “Don't think they lack the power to go the distance,” said Nathan. “With a change of approach and attitude, even 24bhp can conquer the world. You might have to choose fewer motorways and be a touch more modest about your daily distances, but the upshot is that there's a chance that you’ll see more and experience more, rather than blasting though places jus to get somewhere else.

“The money saved on these bikes can be spent on travelling, and with less mass to carry around, a lighter more manageable motorcycle can allow you to explore those harder to reach places without the worry of what happens if you drop it or get stuck down a tight lane. They can also be a lot more fun, especially if there's a few of you…” Here’s his take on the Honda CRF250 Rally 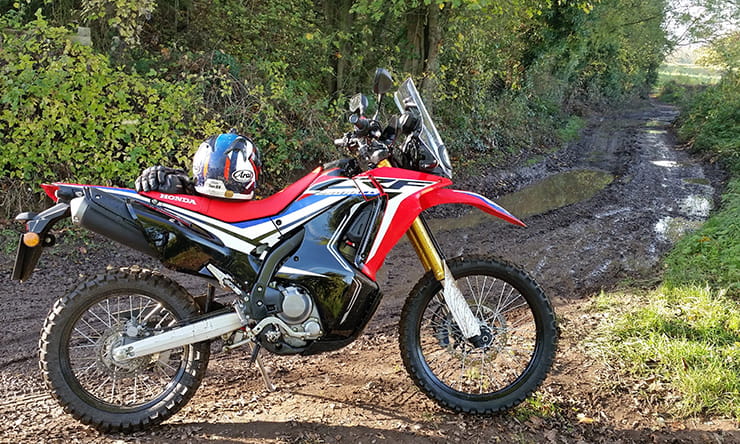 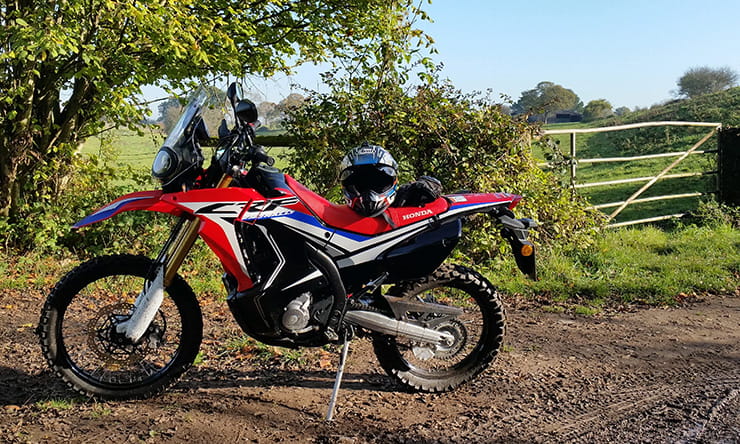 The Honda CRF Rally was the new-for-2017 derivative of the popular CRF250L trail bike that's been with us since 2012. It features the same single cylinder liquid-cooled 250cc engine, steel twin tube frame and spoked 21-inch front, 18-inch rear wheels. The Rally gets slightly taller suspension, rally-inspired fairing, LED headlights, and daytime running light indicators as on the Africa Twin, a slightly larger fuel tank (up from 7.8-litres to 10.1-litres), and a price tag of £5,329; up from £4,649 of the standard L model. Seat height is also up from 875mm to 895mm and weight from 146kg to 157kg, with an increase in front brake disc size from 256mm to 296mm.

The result is very striking. The lop-sided headlight in particular has attracted a lot of attention – not all of it positive – but in taking styling cues from the HRC CRF450 Rally bike the new Honda, visually at least, is arguably the most desirable small capacity adventure bike on the market. It’s also the only one of the four to boast truly off-road friendly 21-inch front wheel and 18-inch rear, meaning a full range of knobbly tyres available for it, and in comparison to the likes of GS310, V-Strom 250 and Versys-X 300, it’s the only one of the four designed for ‘proper’ off-road work straight from the crate.

There are some nice touches when you walk around the bike, from the button beside the digital dash to disable the ABS at the rear, to the hidden tool kit and storage space in the side panel to the left of the seat. At 895mm you soon notice that height, it taking a bit of a swing to get your leg over. But once seated there’s a fair amount of static sag that immediately brings the bike back down to a manageable level for anyone 5’8” and upwards. 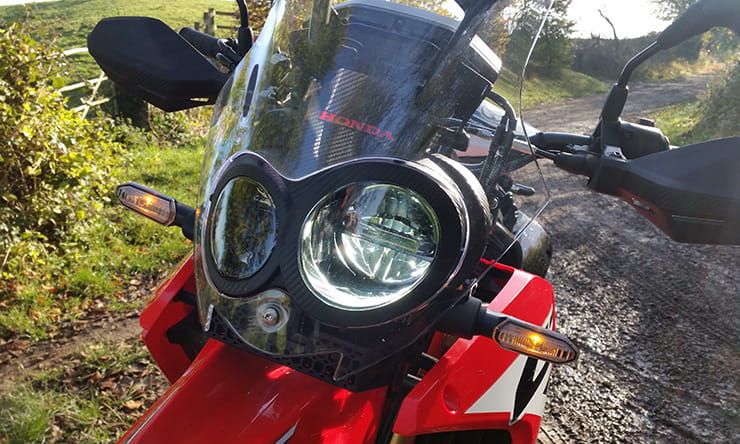 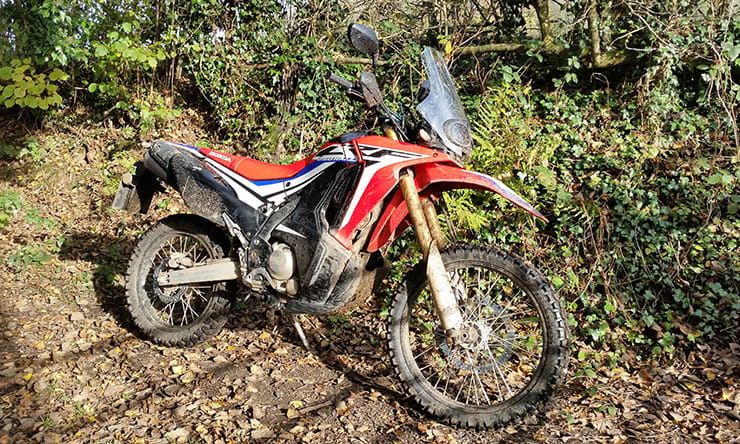 Like the L, the Thai-built Rally comes with non-adjustable inverted front forks and Pro-Link rear shock. With 280mm of travel at the front and 260mm at the rear, the Rally offers approximately 40mm more travel front and rear than the L. Ground clearance is also up by 15mm to a respectable 270mm, while rake, trail and wheelbase all now of course vary slightly to the L. The headlight, clocks and screen are also frame mounted rather than fixed to the bars, which should also make for a lighter steering feel. Details aside, there’s a real desirability to get out and ride this bike. It looks fast. It looks purposeful. It looks like it’s going to give a very dynamic ride.

The reality on the road is something more sedate. Weight over the L is up by some 10kg – thanks largely to the extra plastic bodywork and cowling, but the same 24.4bhp engine remains. For 2017 the motor in both Rally and L has received a 2mm increase in throttle body size (from 36mm to 38mm), aiming to improve throttle response and increase power in the low to mid range, but out on the road the first impression is one of quite a dull, somewhat restricted delivery, with a nice kick between 5,500 and 6,750rpm; after that it just feels a bit restricted, with a dull vibration kicking in all the way to the redline. It’s nothing overly unusual for a single thumper, but it’s more the lumpy nature of it, rather than the lack of power that frustrates. 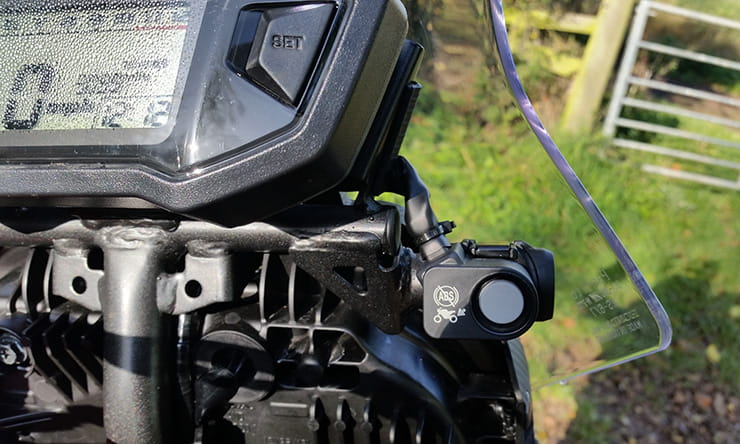 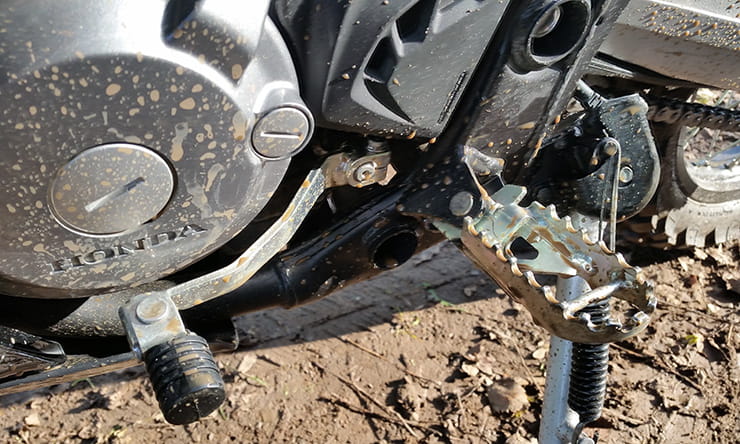 That said, the Honda will cruise comfortably at 65mph, keeping up with traffic and being capable of stretching its legs to a theoretical 85mph in the outside lane. Performance aside, this is a well-tested engine, with the likes of Steph Jeavons racking up over 100,000 miles on her journey around the world on a regular 250L.

A frustration with the Rally is the soft suspension at the rear. It means the bike sits low at the back, making the front end light and at night ensuring the headlight is angled upwards. If it was easy to adjust the rear shock it wouldn’t be such an issue, but some owners have found the only way to adjust it is to drop out the shock and do it that way, as it's very difficult to access the adjuster rings with the shock in situ. Not the most user friendly of options, though something you could possibly request at collection, which would be advised for anyone weighing upwards of 70kg, or intending to carry luggage.

Otherwise the rest of the package is perfectly capable on the road. The brakes are effective, the IRC Trail GP-21 knobbly tyres (the same brand as on the Suzuki and Kawasaki) are free from the type of rumbling noise you can sometimes get with rubber of this nature, while the non-adjustable screen does a fair attempt at keeping the elements at bay, though it's not without some buffeting. With the new 10.1-litre tank there’s also ample range, good enough for 150 miles at least, and despite a bench seat that’s not entirely comfortable after a few hours in the saddle, you can see why the CRF, either in Rally or L form, has drawn much acclaim from riders impressed by its good value, no-frills performance and doggedly dependable build quality. 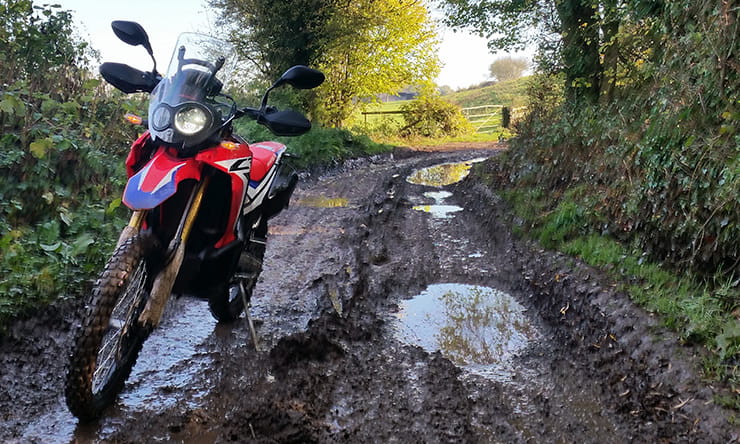 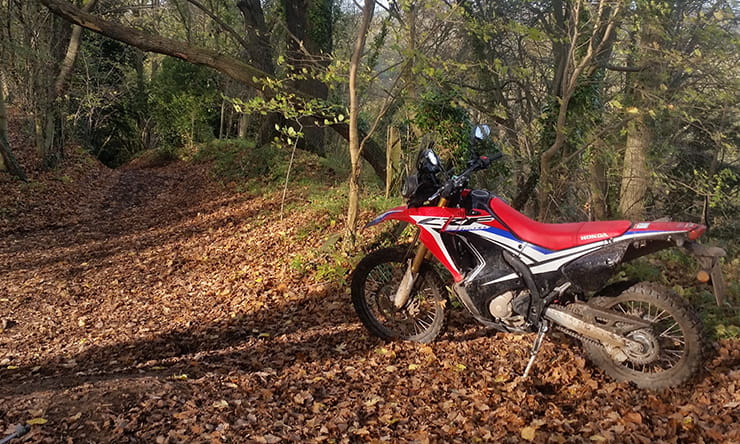 Taking the Rally off-road is where you find out what this bike is really all about. That’s not to say it’s going to win any enduro races or be an alternative to a highly strung KTM, but for riding the trails of the UK it’s hard to imagine a more suited bike on the market. For one, everything about the bike is soft; soft suspension, soft power delivery, soft braking performance. Nothing about the CRF250 Rally is aggressive, and that’s exactly what you want on a trail bike, especially one that’s going to appeal to novice riders. Whereas on the road you might ask for more power, in the dirt the 24.4bhp is more than ample. The soft rear suspension is also perfectly happy soaking up the bumps and makes the slow speed plodding around more manageable as you can easily get both feet on the ground. More experienced riders would benefit from jacking up the rear preload or fitting stiffer springs, and with that done they would have a very competent machine.

The spacing between gears can be a touch too long, meaning you can get caught in two minds between the first three gears – many owners gear the bike down with a quick sprocket change, at the expense of cruising refinement of course – and it would be nice if you could disengage ABS at the front wheel as well as the rear. Like the Africa Twin, the ABS also has that annoying habit of reverting back to the ‘on’ position whenever you kill the ignition, and equally annoying is the fact that you can’t seem to operate the button on the move; it has to be done when stationary. There are other little niggles such as the tool compartment that lets mud and dirt in, as well as the rally plastics and sump panel that act like a mud trap via the opening for the radiator and would involve the panels coming off to clean out properly. 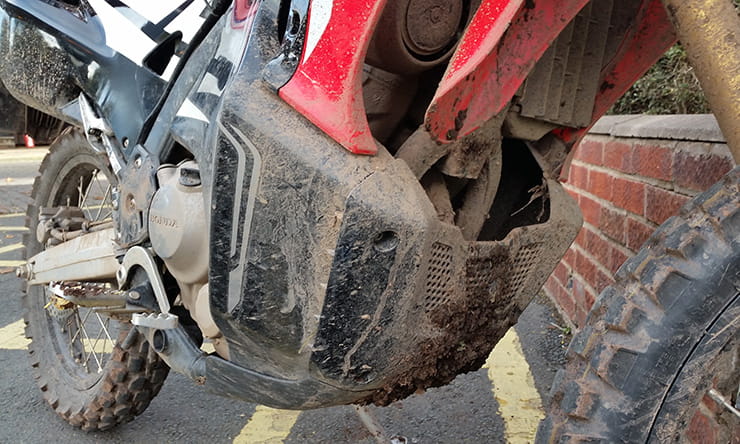 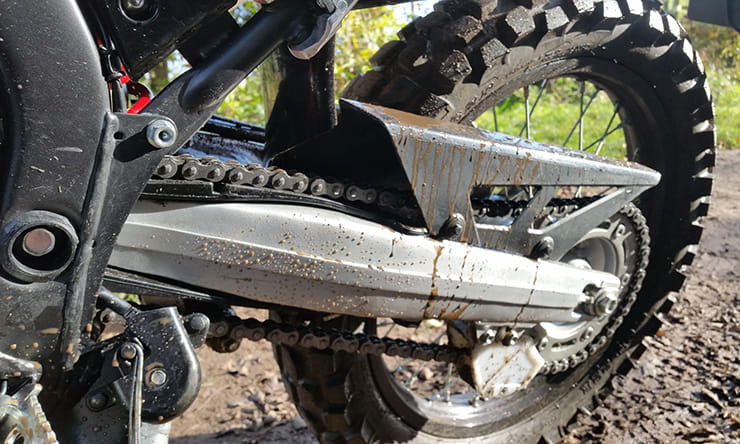 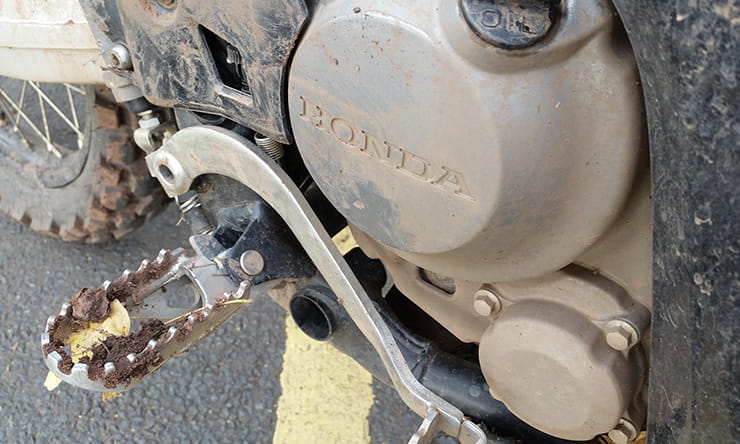 It’s hard to deny the visual appeal of the Rally. It looks fantastic and most of all, when you’re slinging it around the muddy lanes of your home county, you can’t help but feel like a rally hero, out on your own rally bike, and so in terms of feel good factor, there’s a lot to be said for it, even if the L model would suit many buyers just as well, if not better.

Of the four small capacity bikes I’ve tested, the Honda is the one that you’d be most likely to load up for a big trip to Morocco or further afield. It has proven pedigree, simple and robust technology and a versatility for all terrains that only the GS310 gets close to, but hasn’t yet been proven out in the field.

Quite importantly, the CRF also has the lowest running costs, with service intervals – after the first 600 mile break-in – of 8000miles, with Honda offering a £375 service pack that covers the first three services, equating to 16,600 miles of riding. It’s also an easy bike to service yourself.

As a motorcycle for all seasons and for all terrains, the basic CRF250 package remains an incredibly tempting one, with it up to you as to whether you want the flashier appeal of the Rally, or the more humble L. You won’t go far wrong with either…

In a nutshell: Compromised on road but that makes for a great novice trail bike