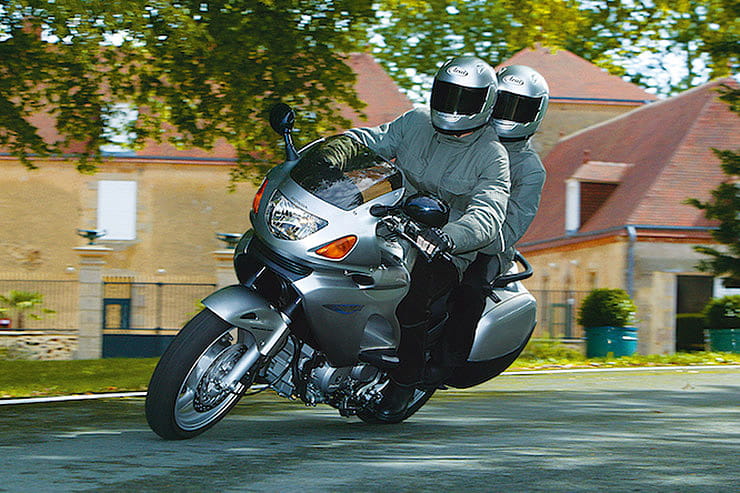 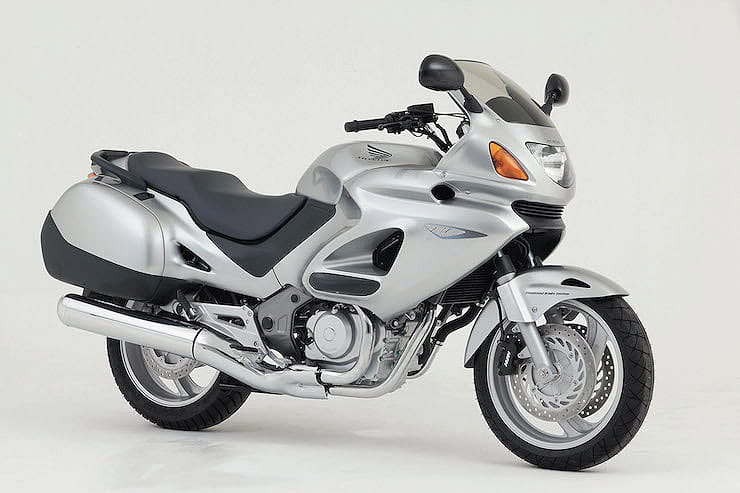 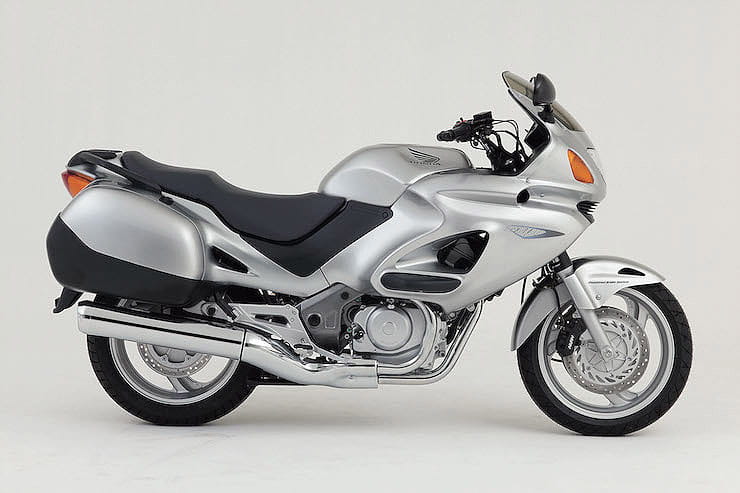 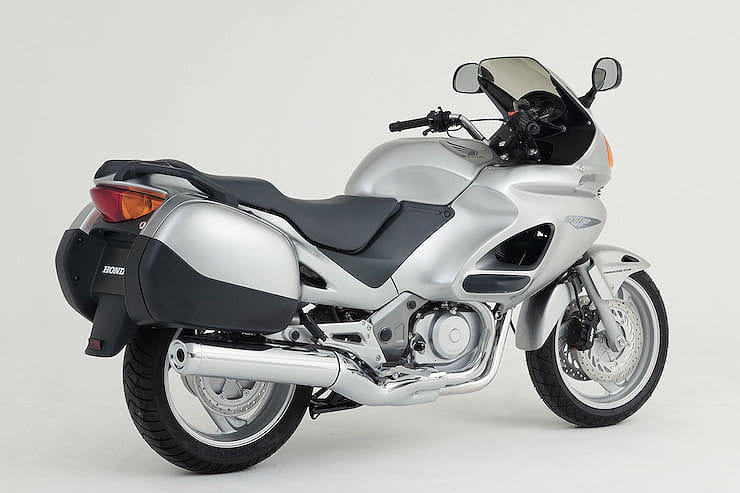 The NT650V Deauville is another classic example of Honda producing a clever, practical and hugely sensible middleweight – yet also one that’s sometimes derided for having a dull, overly worthy image. Bikes like Honda’s CX500, VT500 and non-UK PC800 Pacific Coast also fall into the same category. If that ‘sensible’ image doesn’t put you off, the original Deauville, like the CX and VT before it, also proved hugely successful and popular and was almost unrivalled as an effective middleweight tourer, so much so that it was replaced by the even more effective, enlarged NT700V Deauville in 2007.

At its heart is a proven, durable and flexible V-twin complete with shaft drive. Comfort and ergonomics are typically Honda brilliant. There’s standard built-in panniers, decent weather protection, classy quality touches and it’s plush and idiot-proof to ride. Sure, it’s not the most exciting motorcycle Honda have built but as year-round, pleasant, long distance, easy and affordable transport, there’s few better – unless, that is, you can afford its even better 700cc successor.

Luxury Hondas (and despite being a middleweight, that’s very much what the Deauville is, being a stablemate of the GoldWing and Pan European) never come cheap and that’s equally true of the original NT650V. Launched at just shy of £6K and rising to almost £8000 with the later 700 versions, the NT was quite an investment when new – although significantly less than full-sized tourers – but as a used buy is now something of a bargain. Although now old, quality build and durable mechanicals means that decent, usable 650s can now be had for as little as £1500 with even the very best, low mileage versions topping out under £3K. Under £2500 will get you a clean, fully-serviced and generally pampered version with under 20K on the clock which is tempting when the later, more modern 700 version starts at just under £3K and can cost up to five grand. 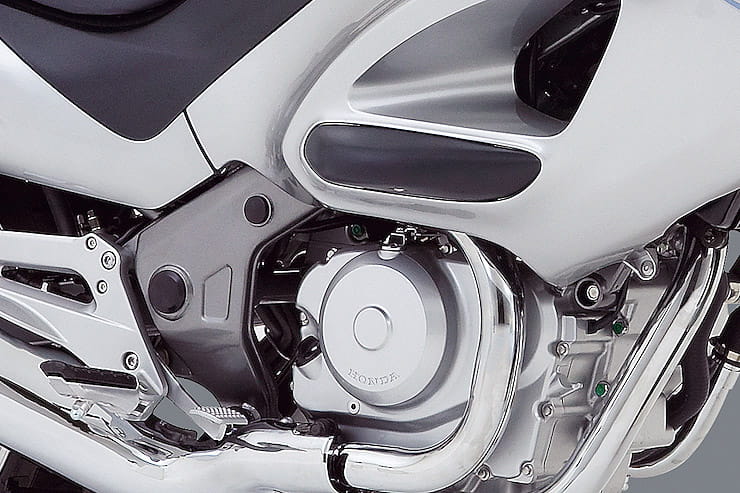 With a fairly soft 55bhp and 41ft.lbs available, the Honda NT650V’s power and torque aren’t huge but are neatly balanced to give the Deauville smooth, silky, able drive from the word go, all the way to a decent and comfortable 70mph motorway speed, although if you push beyond 80mph is does begin to get a bit vibey and if you’re fully-laden two-up it does start to struggle slightly up mountain hairpins. Overall, though, the 650 Deauville is ‘capable’ – capable of mile after mile of hassle-free riding.

The NT650V Deauville’s engine is very much a tried and tested unit. The SOHC, liquid-cooled, 52-degree V-twin with shaft drive is derived from that of the NTV600 Revere, is related to that of the Transalp, Africa Twin and others and as such has been powering Honda machinery since glaciers slid across the Scottish borders. In 2002 it received several updates to bring it into the modern world, namely a catalytic converter to appease EU emissions regulations and lighter engine internals to reduce vibration but it didn’t receive any significant performance boost until expanded to 680cc for the 2007 NT700V. Reliability is generally excellent and, if maintained properly, is capable of mileages well into six figures. Used machines with 50K or more on the clock should provide few concerns. 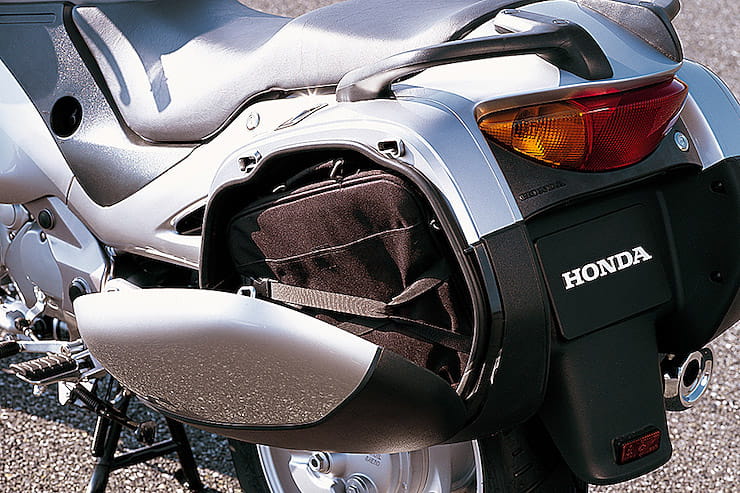 In normal, solo riding, the Honda Deauville’s softly tuned V-twin returns around 55mpg, which gives a theoretical range of well over 200 miles, which is true tourer capability. Bikes are rarely ridden hard, so that’s unlikely to diminish much, although touring two-up, fully laden with luggage over some gruelling mountain passes will reduce things significantly.

The Honda NT650V Deauville has a steel twin spar frame with fairly lazy steering geometry and adequate but mostly unadjustable suspension designed for plush touring comfort rather than taut, sporting handling. The suspension is OK if a little soft but doesn’t unduly affect the ride quality even when carrying weight. If carrying a pillion the rear preload can be easily adjusted. The steel frame, shaft drive, luggage etc means the Deauville is fairly heavy overall for a 650, but is significantly lighter than full-sized 1000cc tourers. Overall the Deauville handles remarkably competently and, for a tourer, is refreshingly nimble, especially around town. 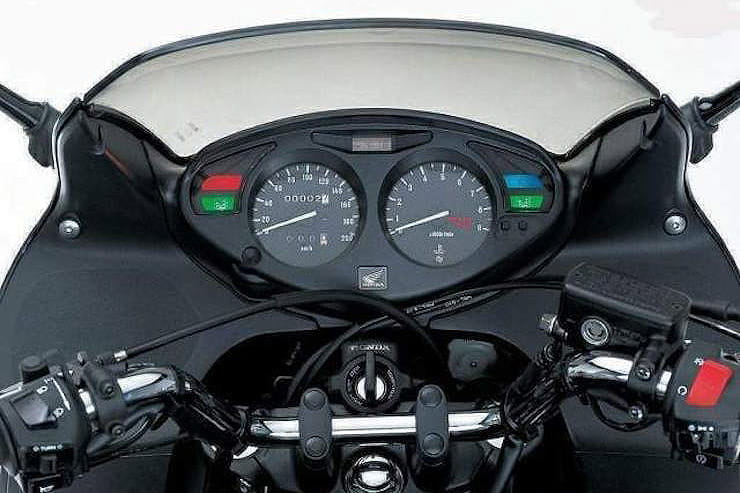 There’s nothing much wrong with the Deauville 296mm, twin piston caliper set-up although the original versions are now starting to show their age, can start to struggle if ridden two-up, fully loaded and, if ridden year round, can be susceptible to road salt so need to be regularly maintained. Many riders also upgrade with braided hoses or even a complete caliper swap. The 2002 update saw the introduction of Honda’s CBS combined braking system, complete with new three-piston front calipers, which are a worthwhile upgrade.

This is where the NT6590V Deauville comes into its own – few, if any, middleweights, are so good. It’s very comfortable for both pillion and rider. Its large screen is very proficient at deflecting air over the rider and pillion, too. And in true Honda style, the seat-to-bar-to-peg position seemingly fits one and all. The real beauty of Deauville is it does exactly what Honda designed it to do, no more, no less. Simple additions of GPS and heated grips turn a capable machine into a very capable machine, as many Deauville owners will testify. There’s a devoted and active UK Deauville owners’ forum online – www.deauvilleuk.org – that’s definitely worth checking out.

The first 650 Deauville came out in 1998, well before the current electronic age so there’s no traction control or other rider aids here. But you do get a decent array of touring goodies. The integral, colour-matched panniers are useful and sturdy items. However, there aren’t many Deauvilles that don’t have the usual modification of a huge topbox to make it an almost perfect two-up touring machine. The 2002 update, incidentally, saw the capacity of the left pannier increase from 18 to 24 litres with the right increased from 16.7 to 19.5 litres. In addition, more secure cover latches and hinges were fitted. All also feature a novel ‘pass-though’ port which could accommodate items up to 26in long and became known as the ‘baguette hole’. The dash on the early 650s is a fairly straightforward ‘two-dial’ affair complete with useful LCD clock. This, too, was significantly improved on the 2007 version. 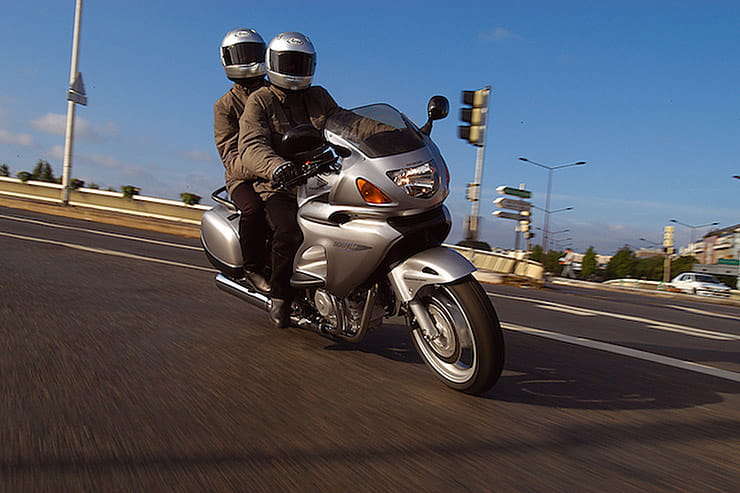 Famously derided by some as the ‘Dullsville’, the Honda NT650V Deauville is actually a thoroughly competent, effective, comfortable, durable and now affordable machine. What it lacks in sports performance it makes up for with true, real world, day-to-day versatility and its durability is now only matched by its value as a used buy. The first 650 performs well and can be a true bargain but the 2002 improvements shouldn’t be ignored and the later 2007 machine, with fuel injection, 10bhp more performance and uprated dash, screen and style, is a significant step up reflected by its far steeper used values. But, although a little worthy, the 650 Deauville remains a brilliant value, year-round mile-eater.

Three things we love about the Honda NT650V Deauville…