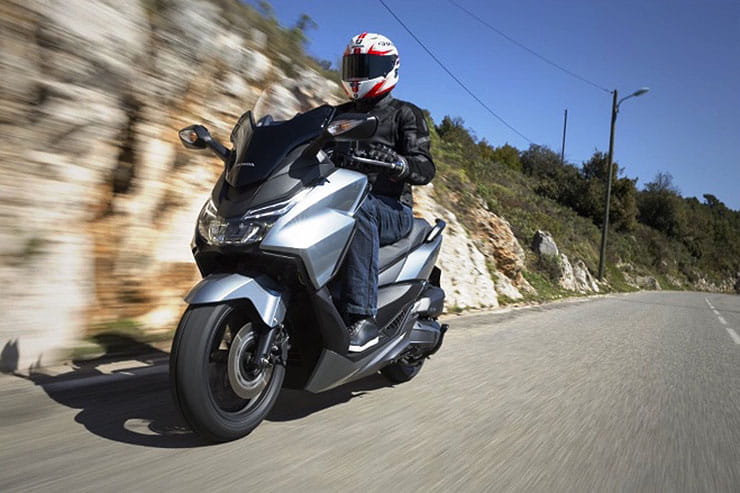 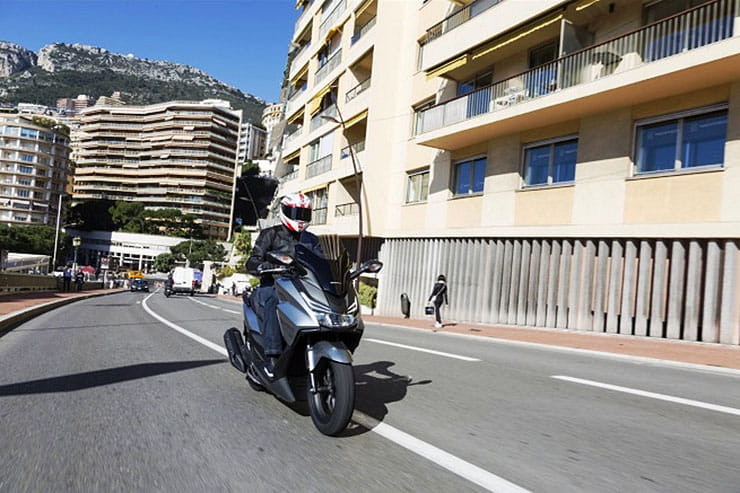 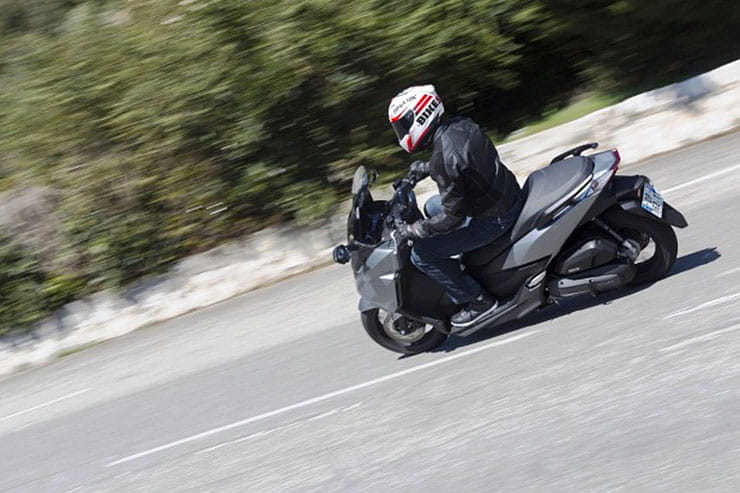 Honda introduced its original Forza 125 as a well-specced, premium quality, more mid-sized commuter scooter in 2015 and it’s proved such as success it’s been updated twice since, first in 2018 then in 2021.

A perky performer that’s capable of taking a pillion (even if your A1 licence might not be) it’s comfortable, well-built, has lots of quality touches and decent luggage space, too.

And although premium-priced when new, it’s durable and great value used and so economical and cheap to run it makes a very affordable, but still reasonably classy, commuter. With a 300-mile tank range, smart design, plenty of storage and a premium feel what’s not to like?

When new, the original Forza 125 was priced at just under £4000, putting it among the mots premium-priced of 125cc scooters. It was worth it, though, for the performance, quality, specification and ability it brought to the class.

The buying public presumably agree as it’s been a significant success for Honda as a more premium alternative to its best-selling PCX125 and as a result used values are strong. Even the cheapest, higher mileage 2015 example with today still command well in excess of £3000 while the best, recent low-milers command over £4K. 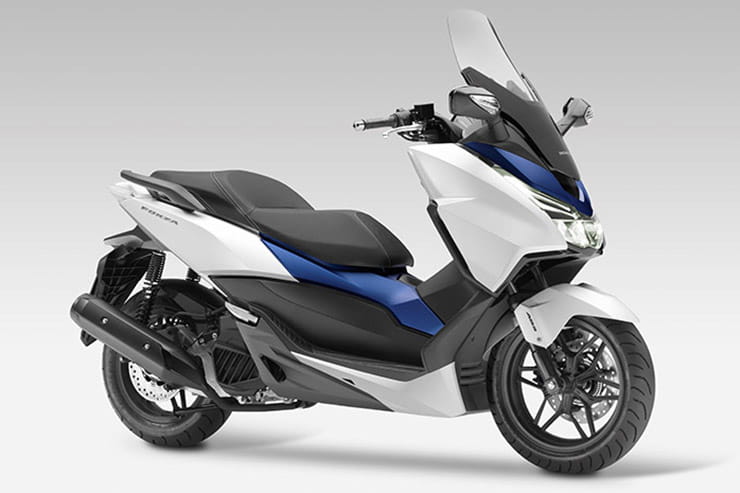 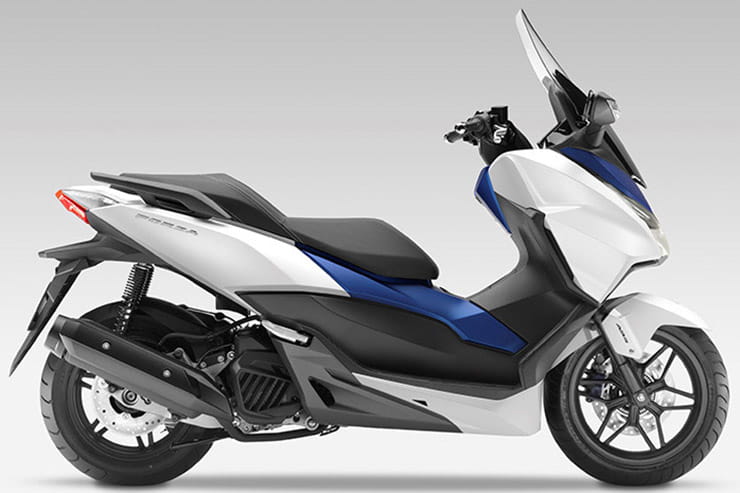 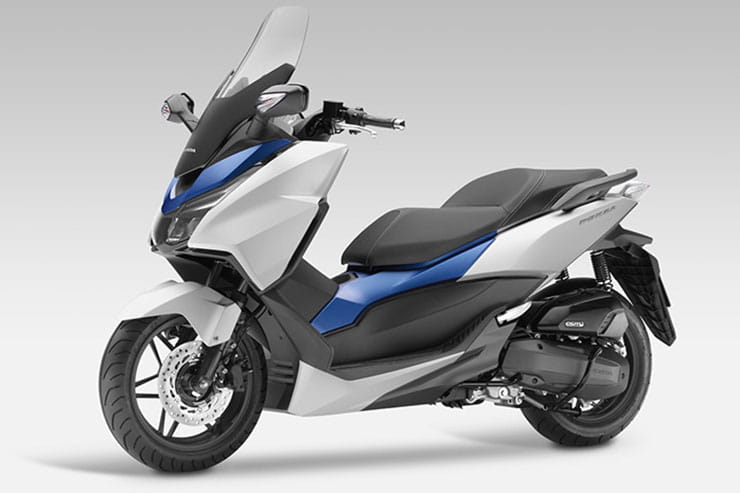 At the end of the day the junior Forza (there’s now 300, 350 and 750 versions, too) is ‘only’ an A1-compliant 125, and is also a significantly larger, heavier one at that so its performance is never going to make the hairs on the back of your neck stand up.
That said, its modern, fuel-injected, liquid-cooled four-stroke motor is thoroughly up to date (although it’s since been improved twice to meet Euro4 then Euro5 regulations) and its respectable 14bhp peak power and 8.8lb-ft of torque, combined with the Forza’s surprisingly light weight, considering its size, means it’s a decent performer.

Getting away from the lights, roundabouts or even trouble is effective, with acceleration posing possible embarrassment to other bikes and scooters.  For a 125cc the roll-on pace from 30-50mph isn’t as sluggish as you might expect either and the Forza will max out at a little over 80 mph.

Although the Forza was a brand-new design when originally launched in 2015, its 4-stroke, 4-valve, liquid-cooled engine was based on the same ‘ESP’ motor (Enhanced Smart Power, if you must know) already seen in Honda’s in the PCX and SH 125s, although it had been “considerably upgraded” to eke out more miles per gallon and performance. Transmission is by conventional ‘twist ‘n’ go’ CVT (Constantly Variable Transmission) belt drive. Although the standard exhaust is nothing special, interestingly a fancy Akrapovič version is available as an accessory. 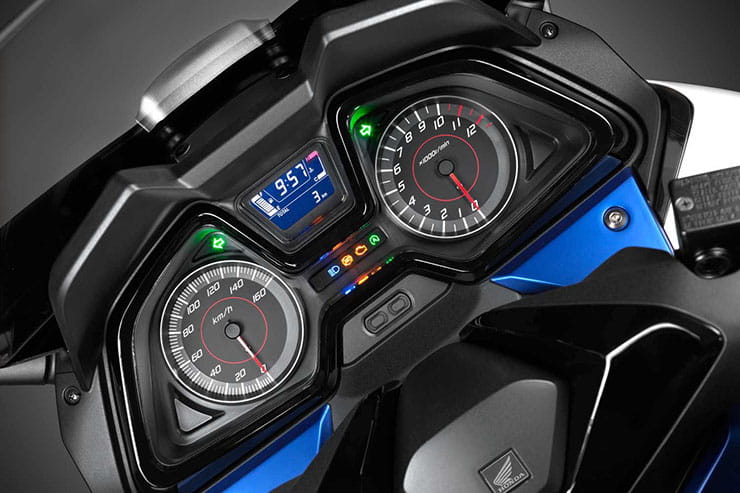 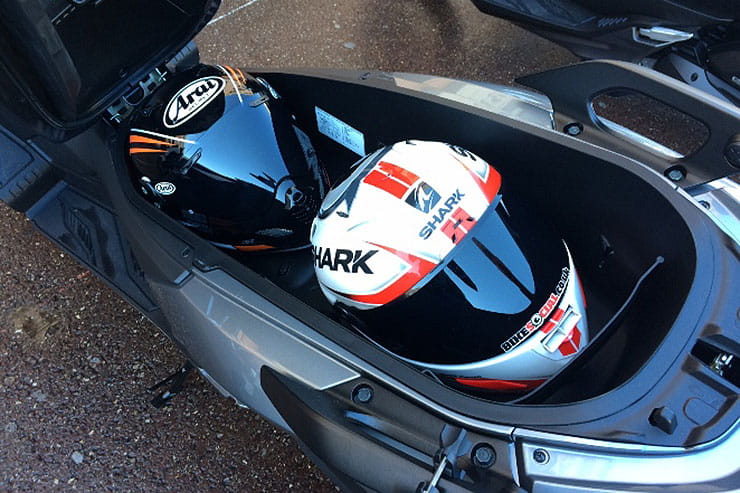 Above: Clocks and evidence of enough space for two full-face lids

Honda claimed a fuel economy of over 123mpg for its original Forza 125 courtesy partly of its then novel Idling Stop function, much like you’ll find on some modern day cars and indeed on Honda’s PCX and SH scooters. After three seconds of being stationary and with a brake applied, the engine will cut out until a turn of the throttle. It’s instant to fire up too, no twist-and-wait.

Our 90km test showed a real consumption of 2.6 litre/100 km which converts to a healthy-looking 109mpg – and you’d be hard pressed to get it lower. This kind of efficiency equates to a 274-mile range per trip to the petrol station.

The original Forza 125 is stable enough on its 15” front and 14” rear wheels while 33mm front forks and a 5-stage adjustable preload on the rear twin shocks combined with a large one-piece seat offered real rider comfort. But despite its meaty dimensions, the Forza is also impressively light and a more nimble handler than you might expect. 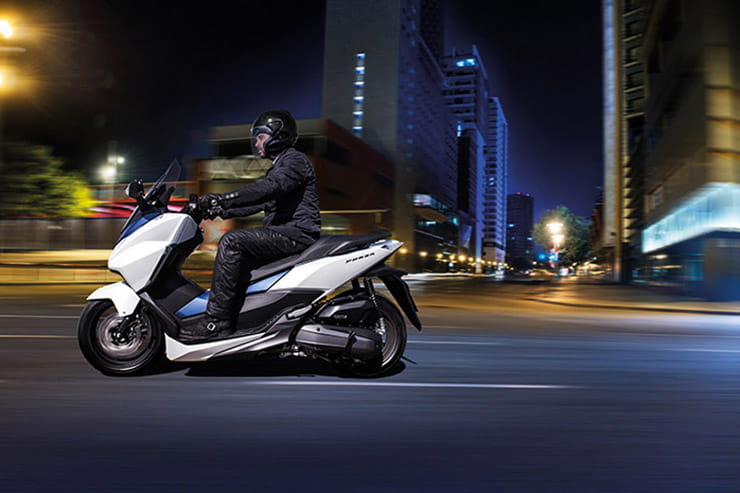 The 2015-2018 Forza 125 comes with front 256mm and rear 240mm discs, ABS is standard on UK models, and the stopping power is sharp enough and easily managed with one finger if that’s your style.

The Forza is impressively roomy for a 125 scooter and has a large, comfortable dual seat. Its windscreen adjusts through a range of 120mm and is operational while the scooter is in motion just with one hand. It offered a good degree of protection as well. The lowest setting had the breeze striking my neck while the highest setting would offer much more rain resistance.

Overall, for a 125 scooter, the Forza is a terrific commuter option even for those travelling into town from 30 or so miles away and even copes with sustained motorway or dual carriageway riding far better than you might expect.

The same stylist as the futuristic, NM4 Vultus worked on the Forza’s design but don’t hold that against it! Funky lines and neat touches like the side vents and 3D effect on the front fairings demonstrate a hearty development process leading to a premium feel. It’s shorter, narrower and taller than its nearest rival, the Yamaha X-Max 125, and has more ground clearance yet a lower seat height.

Storage-wise there’s a 48-litre under-seat storage area which is good for two full-face helmets (yes, I tested it!) and a glove box with 12v power socket. 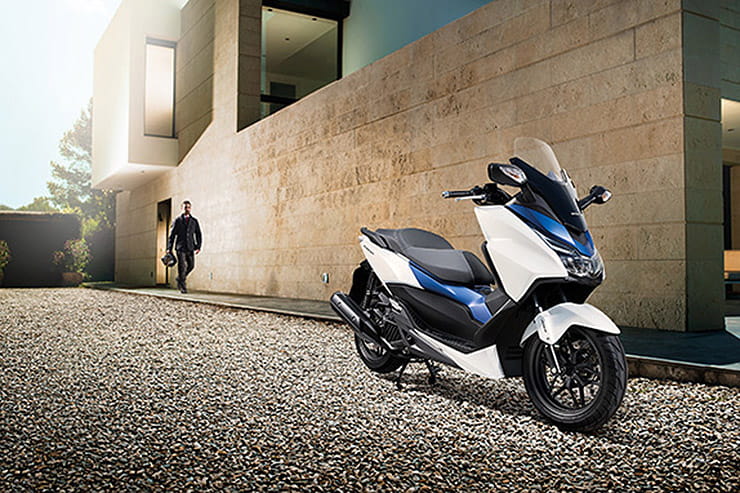 Scooters of this ilk are hugely popular across Europe, more so in France, Italy and Spain than the UK and it’s perhaps surprising that sales here aren’t as high. They’re not only ideal for zipping around town but also for those with a commute from out of town.

For cruising in comfort and darting through rush hour traffic with a high-quality feel, plenty of storage and a three-figure MPG the Forza can be rated very highly. It’s also proved very durable and reliable and although updated twice since with further improved spec and detail changes, the original remains a classy 125 commuter.

Three things we love about the Forza 125…

Looking for scooter insurance? Get a quote for this scooter with Bennetts bike insurance