Winter road test: 110-miles per day in all conditions on the Honda CRF1000L Africa Twin 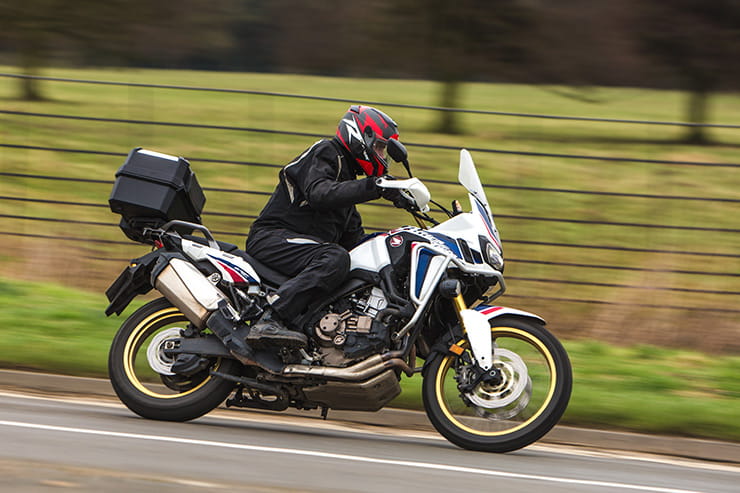 It feels like I must be the last of the UK press pack to ride an Africa Twin. Even our local free paper has done a road test before me.

Thing is…I wasn’t in that much of a hurry. Been disappointed by too many other big adventure bikes. I love BMW’s big GS, but a lot of the clones, while having most of the correct ingredients on paper, somehow miss out on the GS’s personality. There’s a playfulness in the BMW that I always found missing in the competition. Until now. Honda’s Africa Twin isn’t really a wanabee-em-double-u. Gone is the sogginess and seasickness of the Varadero or the ‘Isn’t this just a road bike with a beak?’ of the Crosstourer. This time Honda ignored the ‘adventure’ tag and built what we used call a ‘big-trailie’ for the 21st century.

More road-focused than old-school big trailies, the CRF sits on properly-sprung suspension with carefully chosen damping rates that give it a lot more poise and confidence than most of the bog-hoppers out there. This suspension is bolted to a stiff chassis with a proper penthouse riding position and kicked along by a smooth-but gutsy parallel twin.

And it works. Brilliantly. BikeSocial’s long-term test bike has Honda’s semi-automatic Dual-Clutch-Transmission (DCT) gearbox which gets better with every new model they put it in. The latest software controlling DCT times the gear changes almost exactly as you’d want them to happen, and, as ever, there are paddles on the left hand switchgear to go up or down manually if you need a bit more oomph for overtaking.

I’m not sure that high-speed winter commuting was top of the design team’s list when planning the new bike, but it’s something that the Africa Twin excels at. Nothing I’ve ridden recently is quite as good at holding an accurate line over ruts, white lines and cat’s eyes while the rider unleashes a slug of high-speed torque, picking out the ‘Africa-Twin-and-a-bit’ sized gap between the endless line of red lights on the left and infinite stream of white ones on the right. Everything on the bike comes together to make this happen. The riding position, DCT gearbox and controlled suspension all work together. The only change I’d make would be to move the rear brake pedal to a lever on the left-hand handlebar, like a moped – that would make it even easier to control.

It’s hard work and I’m knackered by the time I get home, but buzzing too. I’m not proud of riding like this and the time gained over sitting back and picking out a careful overtake is probably no more than five minutes on the whole journey. But, when a bike is this much fun and feels so confident and secure, sometimes it’s worth letting ‘bad-Steve’ out of the box. Like I said up top, the Honda has a playfulness that I only previously felt in BMW’s big GS. 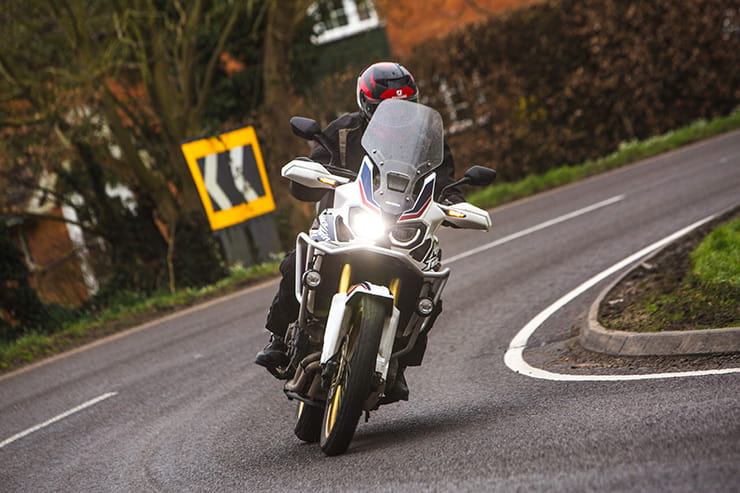 The downside of all this comes when you look down at the fuel gauge. Four fifths of a tank gone in 110 miles, suggesting a tank range somewhere around 140 miles. That’s disappointing because, while this might have been fun, it hasn’t been particularly fast and it’s pretty much all continuous, not stop-start (as a measure I can usually do the whole 55 miles each way without putting a foot down more than twice).

My only other niggle is the optional, tall screen fitted to our long termer. I have to sit very upright to see over it in the rain and there’s a weird airflow that directs cold air under my chin, making my eyes water for the first few miles.

Other than that, the CRF1000 is fast becoming my favourite winter bike. Honda’s heated grips aren’t the warmest, but they do keep the chill away and next week I’m planning on riding it like the middle-aged gent that I am supposed to be in an effort to get 200 miles from a tank. 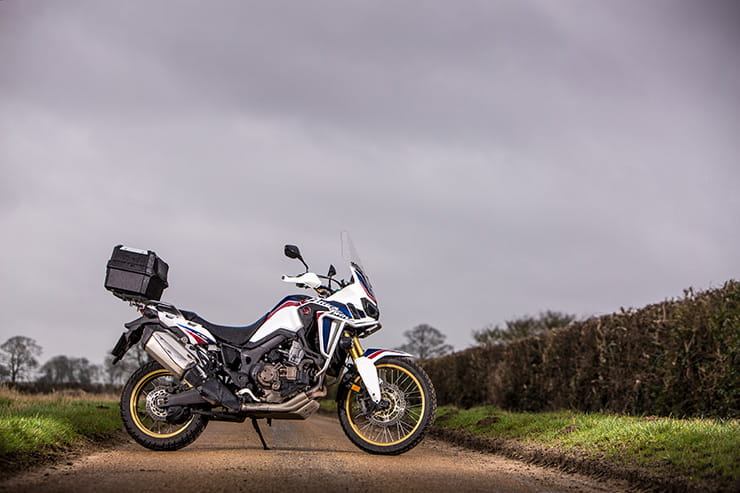 Riding is definitely better than storing because, like most modern bikes, the Honda has a small battery and lots of electrickery to power. Add in the tracker that Honda UK fit to their test bikes and it’s easy to understand how our bike went from sparky to dead after six weeks laid-up over Christmas.

The battery is easily accessible in a box above the engine, but needed a full day on charge and some help from a portable ‘jumpa’ box to turn those big pistons over when cold. 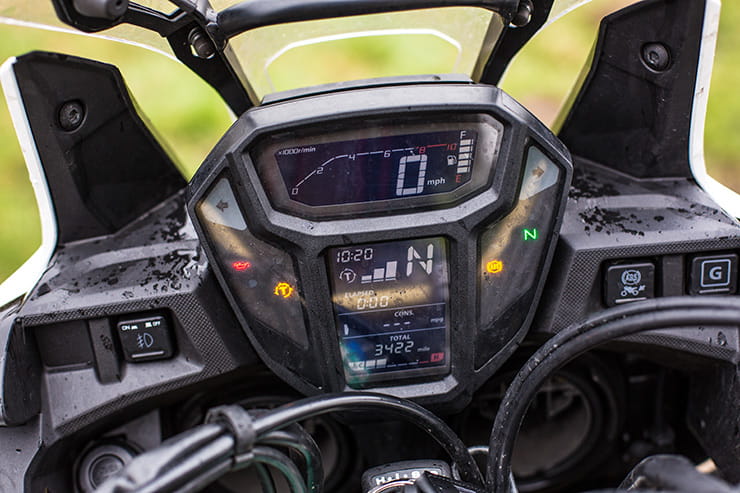