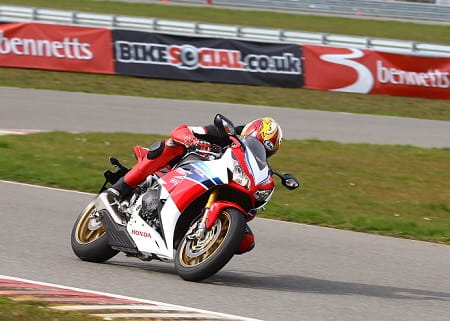 Few bikes evoke such a strong reaction of lust among riders of a certain vintage as the names RC30, RC45, SP-1 and SP-2. The names alone are enough to get a grown sports bike fan drooling.

There’s no HRC designation of RC for this bike like there was for the RC45 and RC30, but you can tell the moment you set eyes on it this Honda is special and comes from the same family. Yes, other Fireblades are available, either used or new, but none of those are SP.

It’s the Honda Racing paint scheme that hits you first, then you notice the single seat unit, the fat Ohlins front forks, the SP logos and those top-line Brembo four-piston monoblock calipers. It’s a beauty alright.

The motor also receives some attention and is essentially blueprinted so it’s putting out another 3bhp on top of the standard Fireblade. The motor gets the revised cylinder head of the standard 2014 Blade, but also gets lightened and balanced con-rods and pistons so everything works to perfection.

All in all it means the SP is putting out 178bhp in total.

Annoyingly on a motorcycle that’s this special and costs more than £15,000 there’s no quick shifter or traction control system. As my fellow tester, former World Superbike Champion Neil Hodgson pointed out, he was running a quick-shifter on a 125 Honda race bike in the early nineties so it’s hardly new technology. Keep up Honda. In actual fact on track the bike never feels like it needs traction control, but on a wet back road it might be welcome.

Somehow how it rides almost doesn’t matter. It’s an SP. It’s a Fireblade. That means that pretty much all of them have been bought already and they’re destined to become a collectors classic.

However, Honda tell me there are still a few in dealers and there’s still one for sale on our own Bike Nation site, so happy hunting. Plus, it would be rude not to have a go.

We borrowed one for MotoGP star Scott Redding to ride on a recent promotional day but thankfully he only needed to ride the standard bike with two seats on the day, not the SP, which left the SP version for me to play on at Silverstone’s Stowe Circuit. It was set in the pits with the keys in it on tyre warmers so it was rude not to. 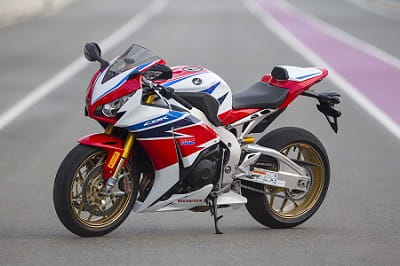 To sit on it’s all Blade, all good. The same comfortable but sports biased riding position, clocks that do everything you need, and a slight stretch to the handlebars. It’s what you know a Fireblade feels like. From the riding position, only the lightened SP yokes give it away.

There are various levels of madness when it comes to 1000cc superbikes. Believe it or not, compared to some of its rivals the 178bhp Fireblade actually feels underpowered. The BMW S1000RR for instance makes a claimed 193bhp. The BMW is one of the most insane experiences in motorcycling and next to the Honda it would smoke it in a straight line. But back in the real world, the Fireblade has more than enough performance. It will lift its front wheel in the first three gears and go on to an indicated 186mph, but it’s degrees of craziness that split hairs between the top five or six superbikes. 180bbhp is 180bhp on a bike that weighs 210kg with ABS or 199kg without.

On its own on a track, the Fireblade SP is a delight. The front suspension is some of the nicest quality kit I’ve ever had the pleasure of using on a road bike, and despite no electronic toys, you never struggle to find grip or feel, such is the quality of both the front and rear ends and the Pirelli Diablo Supercorsa SP tyres. Even on a freezing cold day the bike always finds grip no matter how hard you try. It gives you the kind of feeling you only get from well set-up race-spec suspension and never feels harsh under pressure like standard road bike suspension can. It’s what you pay for.

Admittedly the track was so slippery and cold that I never got it truly on its ear, but where a bike I’d been riding earlier had the traction control light flashing on the way out of a corner, the Blade lets you get a gentle slide on, finds grip and gets on with it. Now I’ve ridden with it, I’d agree that it doesn’t need traction control on track.

Those massive Brembo brakes also take a recalibration. It’s a Fireblade but it stops like something much more expensive. It is. It’s an SP with Brembo four-piston calipers. In fact, for the first few laps I had to change my riding style as the brakes but so hard, making sure that I got all my braking done in a straight line rather than trail braking up to the apex. Hooked in with those front forks, the bike stops rapidly and even on track I never felt the brilliant C-ABS coming in. There’s no pulse from the lever any more, and even World Superbike Pata Honda rider Leon Haslam says he can only just outbrake the C-ABS system on the Fireblades. Just. Good enough for me then. 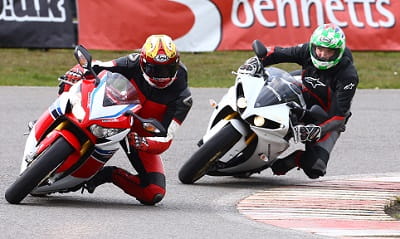 The truth is that every lap on the Blade sees you getting faster and faster as you work out how to respond to the incredible feeling you get from that suspension. Get it in on its ear and power out. It’s quick to steer despite it starting to feel a bit heavier than its new breed of lithe rivals, but it’s always stable with nothing more than a quick head flick to let you know you’re riding something sporty. It keeps you on your toes but never gets lairy.

On its own, the motor never leaves you asking for more. On the short Stowe circuit you only ever need the first three gears, any more is overkill, but it’s still enough to see 150mph on the speedo. It drives from low-down and screams at the top-end. The power delivery is as smooth as any commuter in Honda’s range, yet lets you deliver 178bhp in tiny increments with the slightest flick of your wrist. Honda always talks about ultimate control, and the Blade certainly gives you that feeling.

It’s the kind of bike you can ride all day long and it just gets on with it. No drama. The Fireblade may no longer be king of the superbikes but in SP trim that doesn’t stop anyone who sees it wanting one. Whether or not it’s worth the extra £3000 over the standard 2014 ABS Fireblade is anyone’s guess. But I’m going to suggest that in ten years’ time when it’s sat in your shed and the SP’s value has bottomed out and then increased that extra £3000 will be worth every hard-earned penny. It’s a bike that’s worth holding up with the RC’s of old.

+ It's an SP and an investment. Those forks, those brakes