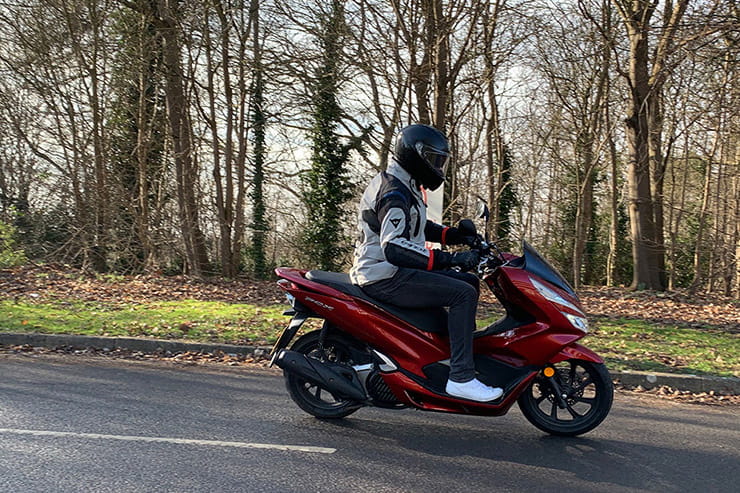 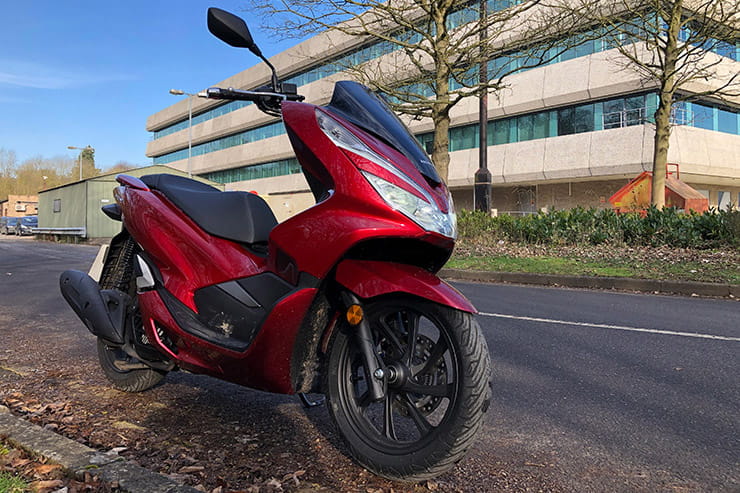 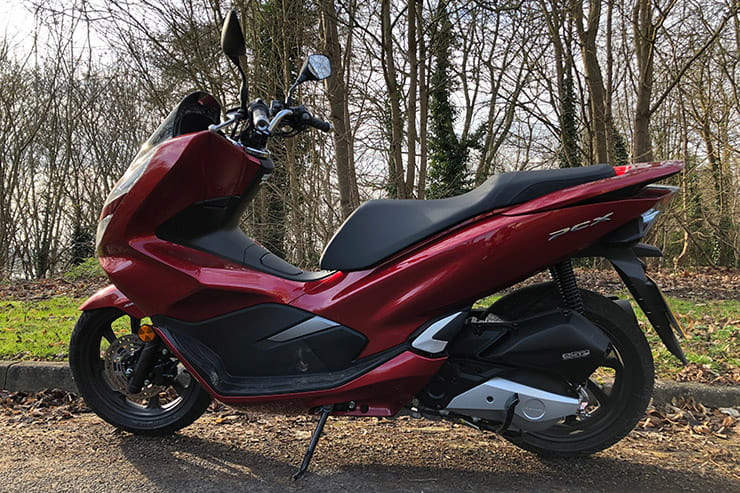 When Bryan Adams hit the number one spot in the UK charts back in ’91 with his gravelly ‘Everything I Do’, not even the staunchest of superfans would have predicted its success. Now, almost 20 years on, the wedding day favourite still holds the record as the longest running number one song.

When the Honda PCX125, a sub-£3k 125cc scooter hit the top spot in the UK sales charts, it dominated for years not just weeks and it’s easy to see why; low cost, easy commuting is the name of the game with scooters and mopeds and when you’ve got a sporty and stylish little number like the PCX125 with a Honda badge and the accompanying build quality all for a decent price then the maths all add up to a best seller. Everything Honda did, they did it for the commuter. Not quite as catchy.

We spent a couple of winter weeks with the little scooter to get a taste of why even the most faithful of GS or sportsbikes riders should add a 125 twist ‘n go to their garage.

For as little as £2929, the Honda scooter holds terrific value although a quick scout around Autotrader and there are ’69 plate pre-reg versions available at dealers for as little as £2395.

If the PCP offer was of interest then with a £300 deposit, the PCX125 could be yours for £54.55 per month. Here’s the breakdown of that deal where monthly payments can be influenced by the size of the deposit: 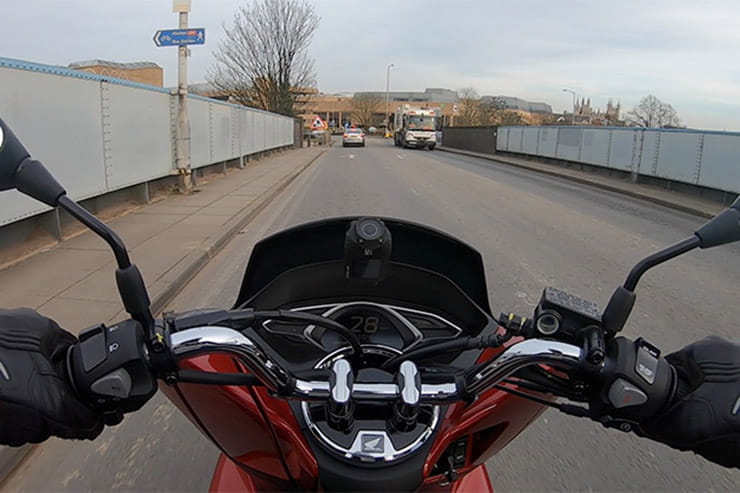 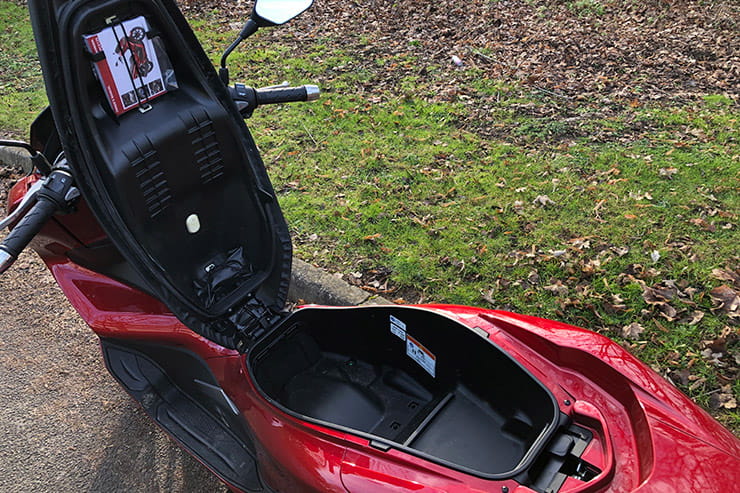 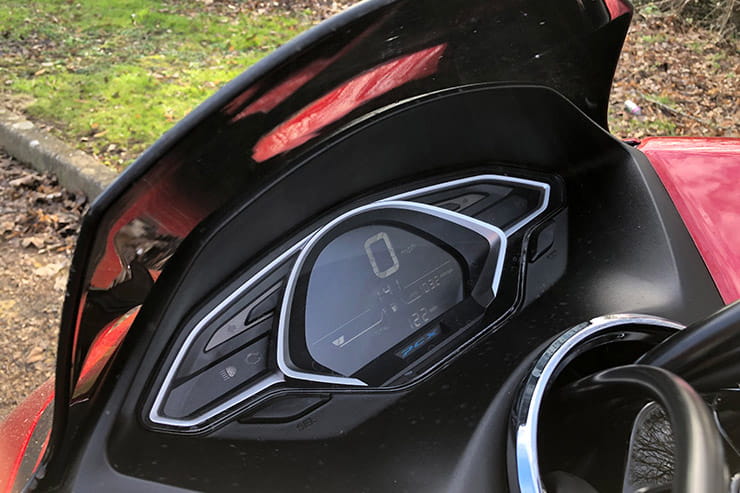 Above: view from the chest cam, the under-seat storage and a rather smart screen

By my own admission, and in true Top Trumps style, I’m normally a sucker for the performance figures on a spec sheet as a precis to being a headline grabber. So, with a scooter designed for practicality and economy over pace, the 12bhp @ 8500rpm and 11.8Nm @ 5000rpm are neither here nor there. Or are they? Because when you’re getting into powered two wheeled transport there’s a good chance a claimed 0.1bhp between rival manufacturers might just make the difference when it comes to shaving time off your PB to college/the office/McDonald’s.

With an indicated top speed in the high sixties (depending on the wind direction and how much you’ve had for breakfast), the PCX125 isn’t going to be found wanting on a dual carriageway once up to speed. Momentum is key to staying safe, rolling off the throttle and on again isn’t going to bring an instant rush of overtaking prowess but build it up and predict the traffic ahead is a whole new game if you’ve been used to gears and 70bhp+.

A single-cylinder 125cc twist-and-go scooter isn’t going to have the R6 brigade quaking in their Dainese’s at the traffic lights but while those four-cylinder supersports machines supping the fuel and making a racket, the PCX125 will be quiet as a mouse (if Idle Stop-Start is engaged) and will be on its way to big a three-figure mpg. On the green light, crack the right-hand twist grip back to the stop and the sporty little Honda will beat most vehicles (who aren’t interested in competing) to 15mph or so, making it an ideal steed for any city or town commuting. Because the kerb weight is only 130kg, the scooter has a massive advantage of not having to carry much in the way of bulk, with exception to the rider, and the key to a smart getaway off the line is to stand over the scooter with no weight on the seat and once the throttle is cranked on and the machine has moved an inch, then you sit and get your feet up! Low down torque mashed with a V-Matic transmission is grunty enough for smooth and efficient acceleration. As a working tool and social get-around it is a genuine master of urban life, and rather obviously easy to ride. There’s little complexity to operating a scooter.

The engine is so quiet at tickover, any neighbours with small children will be grateful but you’ll find yourself wondering if it’s even on, though on the move, the whiney whirr of the single-cylinder and its 12bhp is gentle enough to not require earplugs. 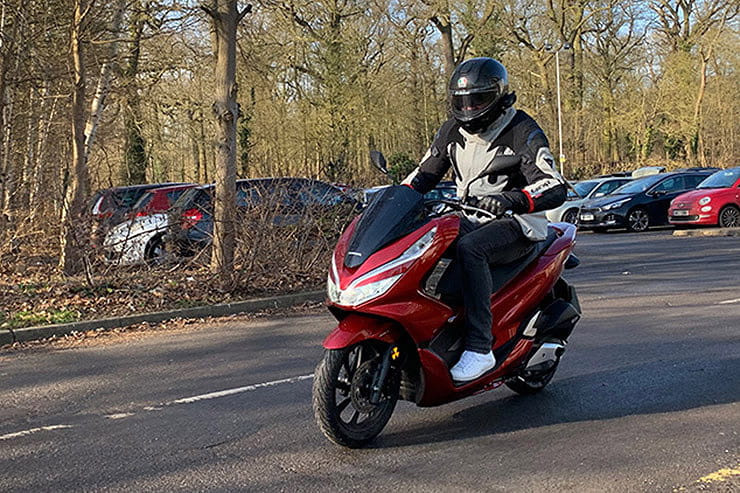 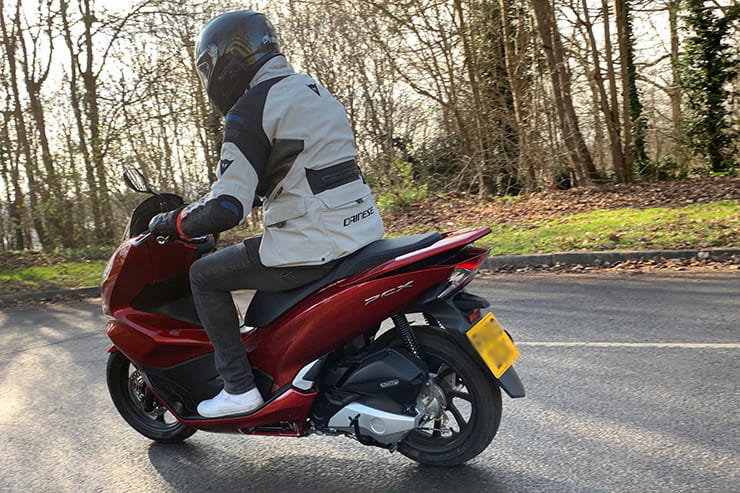 Take it as given that manufacturer claimed figures can be taken with a pinch of salt. They have to be within the realms of accuracy to be legal but are always derived from some cautious riding. So the 134mpg which the PCX125 is supposed to achieve will be your maximum – or, think of it as a challenge to see if you go higher. What you’ll have trouble doing is getting it lower than 99mpg, even if you spent all day riding into the wind at full throttle with your underseat storage full of concrete.

Even though I lack elegance when it comes to caressing a scooter’s throttle, I achieved an indicated 103.2mpg. So, from an 8-litre tank with an average UK litre of unleaded fuel costing £1.24 per litre (according to today’s data), that equates to a full tank costing just shy of a tenner. At 103.2mpg you should be able to achieve a theoretical 180-miles before conking out. That’s pretty efficient journeying.

Aiding the scooter’s frugality, the Idle stop-start function can be engaged using a toggle switch on the right-hand bar and cuts the engine after approximately 3 seconds of standing still and is sensitive enough to fire up and have you on your way as soon as it’s required.

A 764mm seat height is lower than its two main rivals from Yamaha and Piaggio, it’s also low enough to flat foot for those shorter than my 6ft tall frame. Getting on and off a scooter that isn’t a step-thru is crucial for anyone looking at buying. When it comes to parking near a wall or other bikes it’s important to be confident with the scooter’s weight and how manageable it is – the width of the seat and where you can put both feet have to be considered too. At 130kg ready-to-roll, it’s very light compared to all motorbikes and because the engine is so low in the frame, of course the centre of gravity is low making the PCX125 a cinch to manoeuvre at low speed and into/out of parking spaces. The nice and wide lock-to-lock steering angles also help with direction changes and moving the bike around.

On the road, the handling is light and direct with the 14” wheels, a lengthy wheelbase and narrow body helping to dart in and out of the traffic like a lively goldfish. As expected from a sub £3k machine, the suspension lacks plushness especially at the rear when potholes and speed bumps are negotiated.

Since 2016, ABS is a legal requirement on all new motorbikes over 125cc, yet Honda has equipped the PCX125 scooter with the safety system. ABS is present on the front 220mm single disc and even with concentrated force is tough to encounter, while at the rear a non-ABS 130mm drum brake allows for plenty of skids, and is operated from the left-hand side handlebar lever. Use them in harmony and slowing is a piece of cake. The engine braking is efficient enough too. 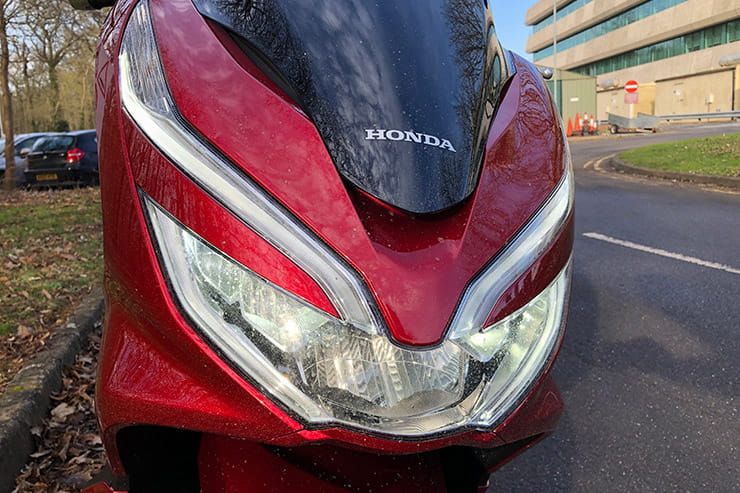 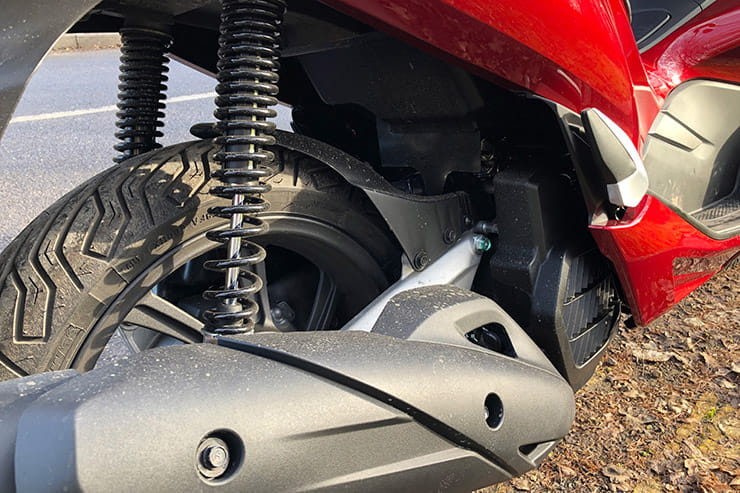 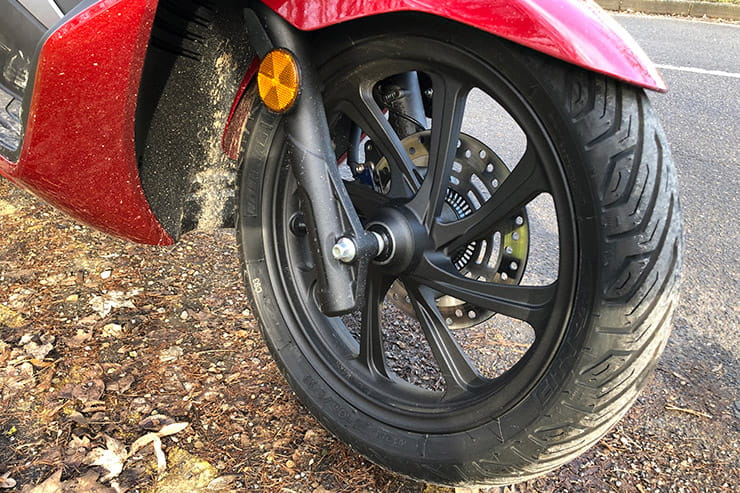 For all year ‘round riding, the weather protection could be better. The large screen may look nifty enough and fits with the sporty styling but it’s not that effective at doing its job for this 6-footer. Thankfully a taller screen is an official accessory at £190. The same goes for the lack of shelter around between knee and ankle – the aerodynamics of the bike may look cool but the narrow curvature in front of your legs creates a requirement for heftier trousers or one of those knee muffs. Though if you’re hooking it onto your motorhome as a holiday tool or if you’re cruising around the south of France then ignore the above! Heated grips are a £295 option and would be well worth considering should winter commuting be a purpose.

The seat is wide and deep enough for commuting comfort and the seat height allows for plenty of leg room while the ‘bars stay close enough for ease of operation. Your legs are still close together despite having the fuel tank access in between them, and the option of having your feet flat or out in front at 45 degrees is handy for the longer journeys to shift your weight around.

LED headlights offer a brilliant and wide spread of illumination, it’s important to see where you going but also to be seen by others especially on those dark, winter nights en route home from the train station. A centre stand and side stand offer versatility when parking although just remember the scooter can’t be started when on the side stand.

Put the steering lock on and an apparently metal shield sweeps across the ignition barrel once the key has been removed which protects from hoodlums and their screwdrivers attempting to start and steel. At the opposite end of your key is the plastic hexagonal device required to unlock the shield and reveal the ignition. Despite being rather fiddly, there’s a degree of satisfaction knowing that Honda has thought about added security.

A 12v socket is tucked away in the non-lockable side storage cubby hole situated in front of your left knee, there’s plenty of space in there for wallet, keys and a phone while under the seat is theoretically enough room for a full-face helmet and other garments. I could fit my AGV Sportmodular but was wincing as the seat clicked shut knowing I’d forced it a little. It’s not an ideal solution because I wouldn’t want to mark a £550 lid so try your helmet under there when thinking about buying.

The storage area is plenty big enough to be useful. I had a backpack with lunch, an Apple Mac, iPad and squash gear under there with room to spare, so your backpack/handbag plus wet weather gear and a lock will fit easily. A 35l top box is an option too. 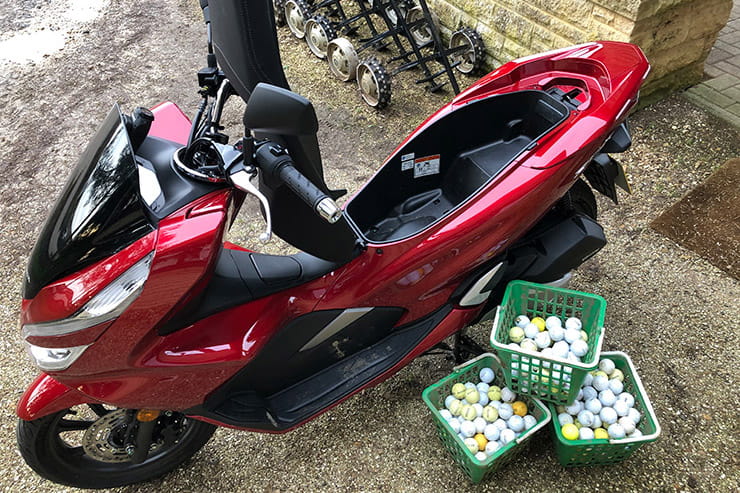 Above: how many golf balls will fit under the seat? Take a look at the video to find out!

Other players such as Kawasaki, Peugeot, Kymco, Vespa, Sym and Lexmoto all have 125cc scooters to offer that are worthy of comparison, even Honda’s more premium model, the Forza 125.

More commuters need to embrace scootering. Fact. It’s the obviously brilliant way to get around, especially on a neat, tidy, well put together, hugely economical and practical scooter like this. We’ve touched on it before in a recent feature about the cost and enjoyment benefits of using a scooter over public transport and spending two weeks on the PCX125 have underlined that.

Even the most inexperienced rider will scoop up lashings of confidence here, and it can be ridden well within anyone’s limits. Whether you’re trying motorised two-wheeling for the very first time or you’ve strapped one to your motorhome, using one as a second or third bike or just as a commuter weapon and nothing else, it’s easy to understand why this fun-filled, bargainous form of transport seems to have permanent place among the best-sellers in the UK, if not Europe. Bryan Adams fans will be pleased the PCX125 wasn’t up against their beloved track.

With the ease-of-use, ease-of-ownership and tempting PCP deal, I’m tempted to part with real cash except the full licence in my pocket ushers me towards some extra power and therefore the Forza 300 instead… but that’s £5k. Oh bother. 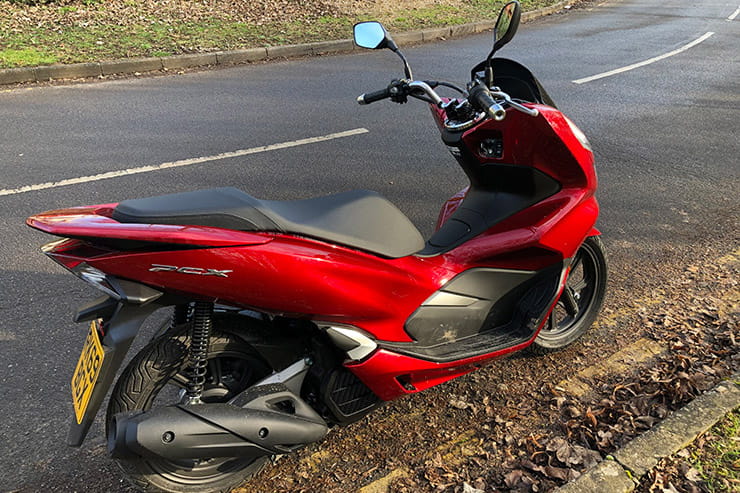 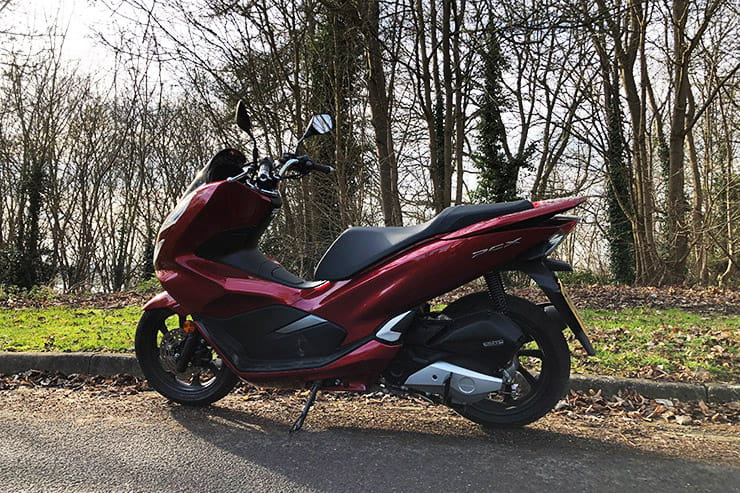 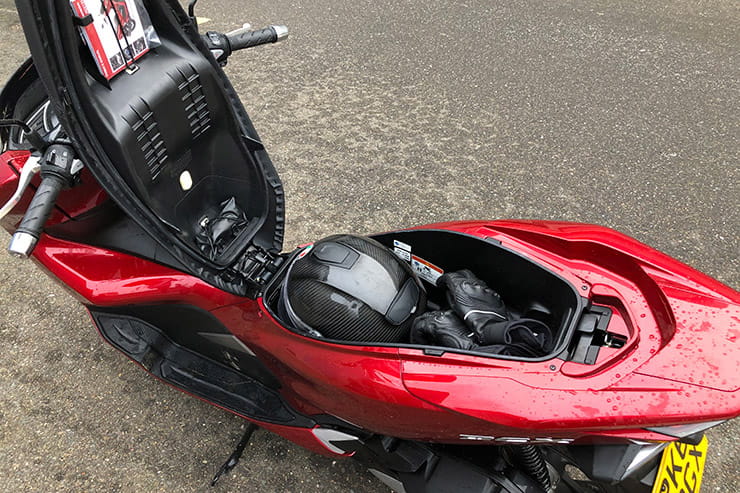