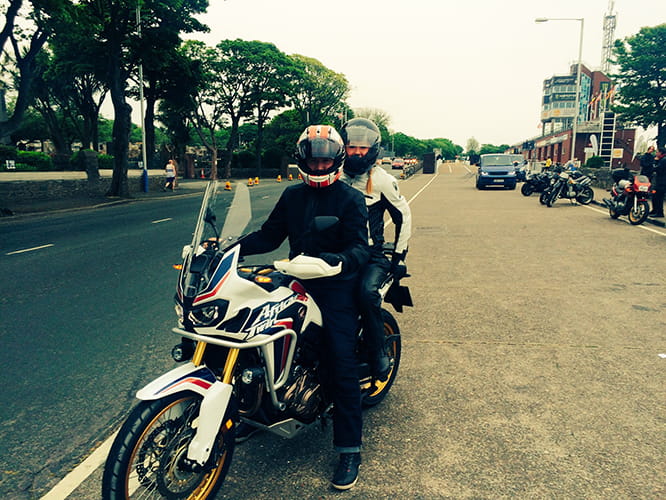 A makeover, Welsh forests, the TT and some pillion action

The Africa Twin has been a very welcome addition to the Bike Social test fleet thanks to its versatility and following its first service is now equipped with an Adventure Pack so from a comparatively naked adventure bike, ours is now pretty much fully-loaded.

The Adventure Pack comes in at £1995 including VAT but not including fitting which is hearty sum on top of the £10,499. The extra constitute two separate packs; Travel (panniers, top box, high windscreen and centre stand) with Comfort (heated grips, 12v socket, fog lights and engine bar) all of which make it look like it can conquer an around-the-world trip.

While not quite a McGregor/Boorman-esque adventure, I did saddle up and covered the 420-miles to and from Wales before the extras were fitted. Merthyr Tydfil to be precise, to the Honda Adventure Experience. This is the new Africa Twin-inspired off-road adventure school offering by Honda but run by three-times Motocross World Champ and all-around top bloke, Dave Thorpe. You can read all about how I got on (and off!) over the two days by clicking here. 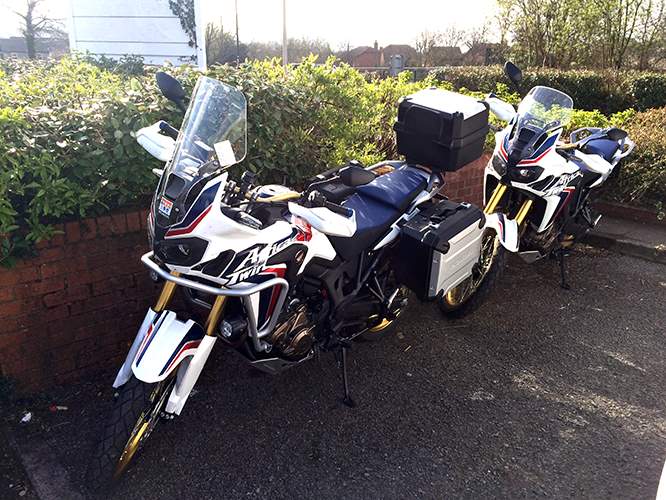 Thankfully the Adventure Experience provide their own fleet of Africa Twins, all of which have the manual gearbox option, traily knobbly Metzelers but no mirrors. Cruising along dual carriageways and motorways en route from Peterborough to South Wales is not what Honda’s engineers had in mind when they created the CRF1000L but it seems that whatever the terrain, the Africa Twin can handle it with aplomb. I find the riding position in terms of peg position, seat height (850/870mm), seat comfort, handlebar position ideal for this kind of riding. The wind protection is reasonably good for the basic spec windscreen though it is on these occasions where cruise control would have been handy.

Having ridden to Wales, then spent two physical days tramping about in the Brecon Beacons being taught how capable the bike is off-road, followed by a lengthy ride home involving plenty of Friday evening M5 traffic, what was noticeable is the comfort of the bike. The 94bhp parallel twin engine is so plush with plenty of torque for overtaking or when a little surge is required. It is equally adept at cruising along in top gear chomping through the miles and the overall package is just so easy to ride. 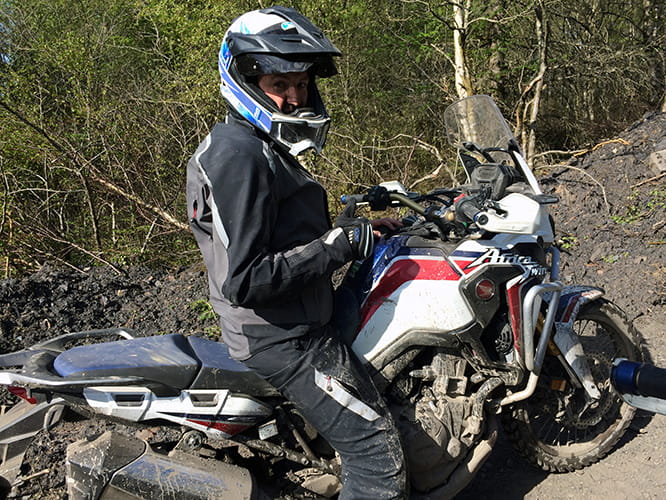 The Bike Social bike has the DCT gearbox which has to be ridden to be fully understood. It is a huge leap in technological advancement in motorcycling and a far more refined version than we’ve seen in other models. The four levels alter where in the rev range the bike changes gear with D, S1, S2 and S3. A simple tap of the ’D’ switch on the right to change it but once in top gear it makes no difference which mode the bike is in. Although like an automatic car, when going for an overtake, twist the throttle and the bike will drop a gear or two. However, I prefer to flick the button behind the left handlebar grip making an instant down change instead of the 1-second it takes the gearbox to figure out your intentions.

By not having the optional panniers I was able to filter with ease. The Africa Twin is narrow, 78mm less than the BMW R1200GS for instance, making it simple to skip through the middle of the slow moving motorway traffic. Of course, having the height benefit of an adventure bike is advantageous too. Having no control over the Bluetooth radio in my helmet when it played Gangnam Style was not.

Over on a small island in the Irish Sea famed for the TT, my wife and I took the Africa Twin out during the non-race day in the middle of the two-week event more commonly known as 'Mad Sunday'.

Seeing how during the first two months of our long term loan of the 2016 CRF1000L we'd now covered a healthy amount of motorway miles, commuted and been off-roading all which has shown the big Honda in very good light, it was time to test just how the bike behaves for the rider with a pillion and how comfortable it is for them.

Mrs Mann stands 5'6" and weighs...as if I'd complete that sentence! Let's just say it's more than my Givi rucksack but less than the desk I’m currently sat at. I’ll leave you to guess from the photos. 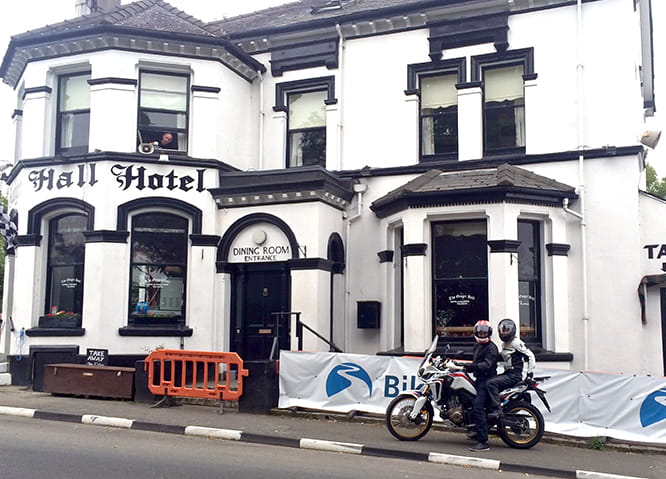 Not the most experienced pillion in terms of mileage, she has still enjoyed rides on several machines including a CBR1000F, R1, Triumph Scrambler and FJR1300. Well, I’m not too confident she ‘enjoyed’ the R1 but nevertheless, she has quickly learnt to be a very good passenger.

After 124 miles of TT and non-TT circuit roads around the Isle of Man, broken up with coffee stops, the verdict was ultra positive.

“Anyone shorter than me might need a step or a leg up to get on the pillion seat, it would be trickier to swing a leg over with any dexterity if the top box was on although I do like to lean against one so I’d rather have it there,” said Mrs Mann.

She gave the seat comfort full marks, claiming, “I thought it really comfy. I didn’t get a numb bum, I didn’t need to shuffle around and the bike seemed to glide over the bumpy bits near Quarry Bends. At first I braced for a jolt but didn’t need to.”

“I also like the height of the seat. It’s a bit higher than the rider and I could see over his shoulder for clear view of the road ahead. The tall screen option is better for me too, it helped deflect the wind while the foot pegs are well positioned. I can’t think of anything I didn’t like.”

For me, the width and length of the seat seems big enough for a pillion of any size and I didn’t feel cramped by having someone on the back. Mrs Mann prefers to hold the sizable grab rails rather than my own grab-flab. Having ridden as a pillion on both the DCT and manual gearbox versions of the Africa Twin, and being a considerate husband, the smoother ride in terms of changing gear and using engine braking is with the manual ‘box.

Incidentally, on ‘Mad Sunday’ we set off at 7am from the pit lane two-up and managed to lap the 37.73 miles Mountain Course in 58 minutes at an average speed 41 mph, claiming 56 mpg. Hardly record-breaking but we did stop off for pics at Ginger Hall and the Gooseneck (before realising it was one-way only) along the way! 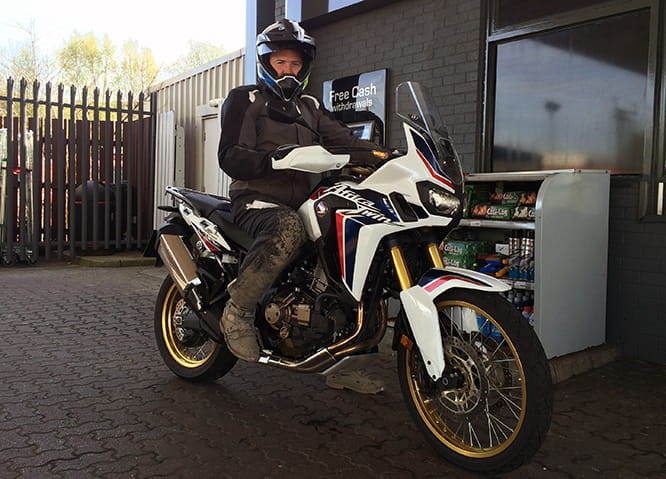