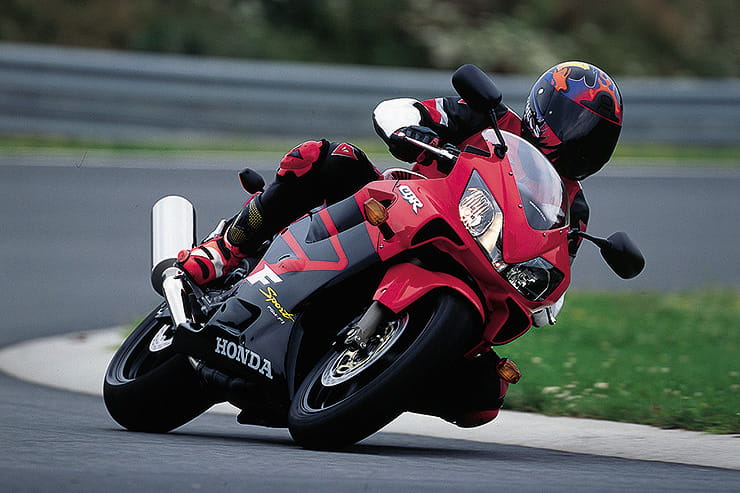 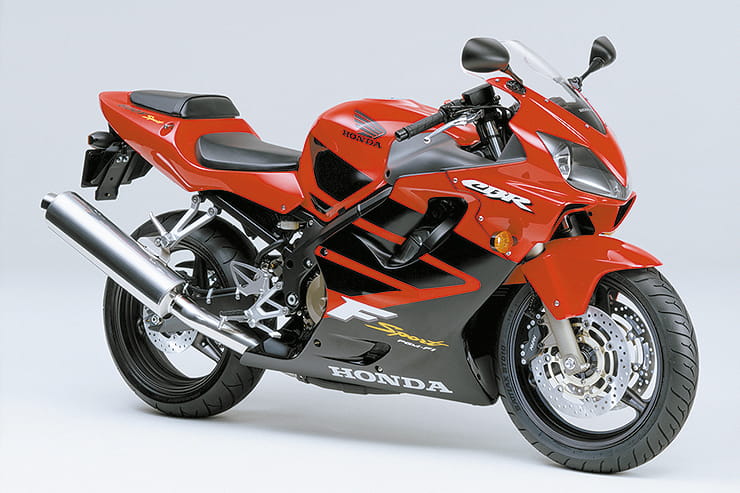 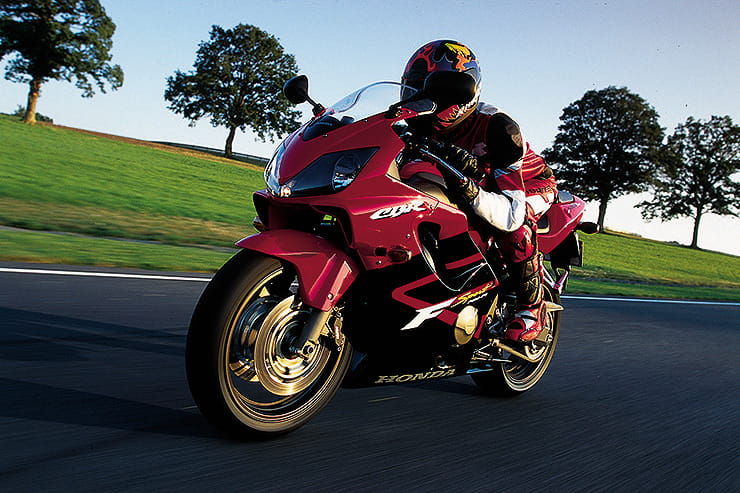 The CBR600F holds a very special place in many riders’ hearts. Launched in 1987, this do-it-all supersport bike (it even came with a centre stand) set the standard in the middleweight sportsbike class and when rivals went all-out for track glory, the CBR remained true to its heritage. That is until 2003 when the CBR600RR was launched and Honda went searching for trophies, abandoning the far more practical F model just a few years later. In many ways the CBR600F and CBR600F-Sport can be thought of as the last of Honda’s ‘true’ CBR600F models, representing the culmination of the CBR’s years of evolution and development, designed to deal with the humdrum monotony of modern life during the week before coming alive at the weekend and even taking a World Supersport title (in Sport guise) along the way. There may be a new model carrying the CBR name on sale but to be honest, a good used CBR600F or CBR600F-Sport is more than a match for the CBR650R – and a damn sight cheaper to boot!

CBRs are still quite popular in the used market and while there are a few high-mile hounds out there for under £2000, you really need to look at spending in the region of £2500 to get a well looked after model from a dealer. There isn’t much price difference between the F and F-Sport model as the racy looks of the Sport are cancelled out by the practicality offered (and its centre stand...) by the F model. The top end for Sports, whose production stopped in 2002, is £3500 while the F, which was sold until 2006, can hit just under £4000. However for that amount it has to be an absolute beauty!

The CBR’s inline four engine is surprisingly smooth and relaxed to use and while it is undeniably a bit underpowered by today’s inflated-capacity middleweight terms, it is still far from a slouch. You can ride a CBR fairly gently on its mid-range and although you will have to downshift a few cogs to perform a rapid overtake, it doesn’t feel too gutless. And should you get the chance to open it up you have a claimed (genuine is just under 100bhp) 109bhp and 48ft-lb of torque, which is still respectable by today’s standards and responds well to being revved hard. It’s a lovely motor to use with bags of sporting potential but lacking the nagging demand to be ridden hard all the time.

One word – solid. The CBR600F has a well-deserved reputation for reliability and despite its age, buying a hound is actually pretty tricky as long as you watch out for a few gremlins. First on the list is the old cam chain tensioner, which has plagued CBR models from the start. If there is a rattle when the bike starts up, assume it needs a new tensioner and a bill of £150 will be heading your way as changing it is a bit of a fiddle for a mechanic to fit. Some owners fit a manual tensioner but they can cause engine issues if not tightened correctly and aren’t really worth the risk. Occasionally charging issues can mean the reg/rec has gone down, but this is an easy fix, and the OE exhaust can rot from the inside out, but replacements are cheap and plentiful. Be very wary of crashed CBRs, especially ones that won’t start as a spike in the electrical system caused by the cut-out switch can fry the ECU, which is an expensive part to replace. Interestingly, the F and Sport have very slightly different motors with the Sport featuring dual valve springs to allow it to rev higher in race trim, a lighter fly wheel and sportier cams – not that you can tell the difference on the road. What you are much more likely to notice is the fact the Sport lacks a centre stand, meaning adjusting its drive chain is trickier! Be a touch careful when it comes to gearboxes as the CBR’s high tickover on choke sees first engage with quite a thump, potentially causing harm within. 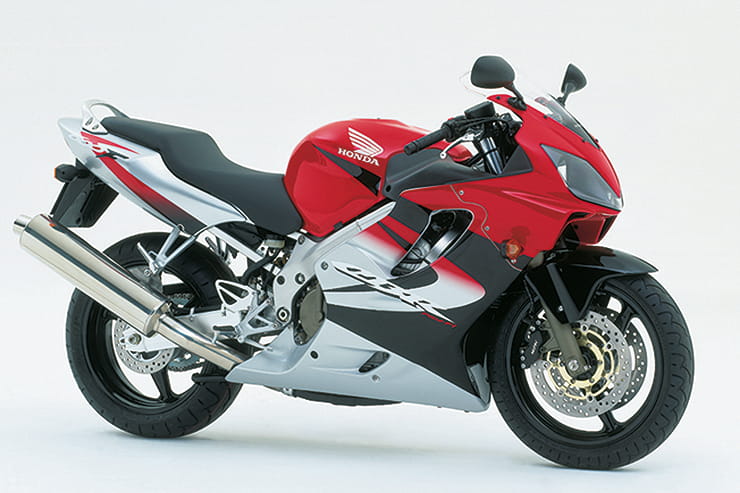 You can expect to get roughly 40mpg from a CBR600F, possibly even more if you spend the time commuting at constant throttle openings on dual carriageways. It may be a 600 but the motor’s flexibility helps keep the mpg nice and high. Honda did actually claim that the updated fuel injection system was more efficient than the previous generation’s system, which is to be expected as they were starting to get to grips with the new technology (for bikes...) by then.

The CBR delivers a great blend of sporty yet not over the top handling and despite some serious track pedigree (it won the 2002 World Supersport title) you can happily ride one to and from work every day. By now the suspension is likely to be well past its best, however a fork refresh and replacement shock is all that is required to return it to its former glory and with this done you can most certainly take on a daily commute and a trackday or two when weekends allow. It really is the ultimate do-it-all middleweight and a bike that delivers on so many different levels. Newer riders will appreciate the CBR’s light weight and low (ish) seat height, making it a great option for a first ‘big’ bike, while those more experienced will relish its sporty handling. When buying used always watch out for crash damage and check the subframe is sitting in line with the rest of the bike as they can get bent off-centre in an accident. Other than this, it is just a wear and tear check such as tyre life, chain and sprockets, brake pads and if all the electrical items are working as reg/recs or generators can fail, especially when loaded up with power-sapping extras such as heated grips. Also be wary of seized suspension linkages, another common issue with age.

The CBR comes with four-piston calipers as standard which grip slightly smaller than normal 296mm discs. ABS was never an option and the CBR came with rubber brake lines, so the first thing you need to do is change them for braided steel items if they are still fitted because after 20-odd years they represent a safety issue. The calipers themselves are solid but will seize pistons if not cleaned regularly and are a bit trickier to rebuild than two-piston sliding calipers, which many modern middleweights use. Basically a clean, new pads and braided lines and you will have little to complain about. 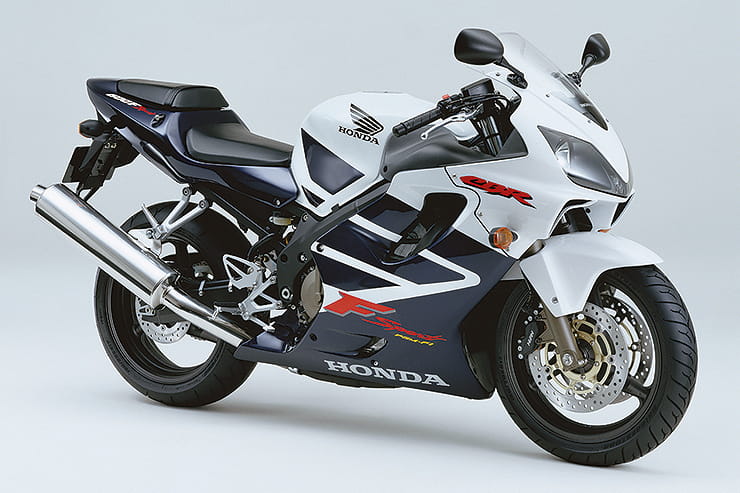 If you plan on covering distances, especially two-up, then you need the F over the Sport model as the Sport has a split pillion/rider seat where the F has not only a pillion grab rail (and a centre stand) but also a one-piece rider/pillion seat, which is better in terms of comfort levels. If touring isn’t really a concern, the Sport has the same riding position as the F and that means a sporty yet not over the top stance. For improved comfort, taller screen are very common alongside aftermarket heated grips.

In terms of rider assists, you get Honda’s HISS immobiliser system, which only assists the bike being there when you return! No ABS, no gear position indicator, no traction control, it’s old school. Accessories are fairly plentiful but crash protection (ideally the kind that doesn’t require the fairing to be drilled) tail tidies, tall screens, aftermarket exhausts, fuelling modules and heated grips are common. Manual cam chain tensioners aren’t unheard of alongside adding a centre stand to the Sport model and the occasional Chinese body kit to spruce up a tired (or broken) fairing.

The CBR600F and F-Sport encapsulate a time when supersport bikes hit the ideal balanced between track and road focus. Both are a great all-rounders and if you want a bit more of a racy look, the Sport gives this without compromising on practicality too much, while the F is a touch more suited to two-up work. As a used buy, you can’t really go wrong with either – and there is even a Nastro Azzurro Rossi rep!

Three things we love about the CBR6… 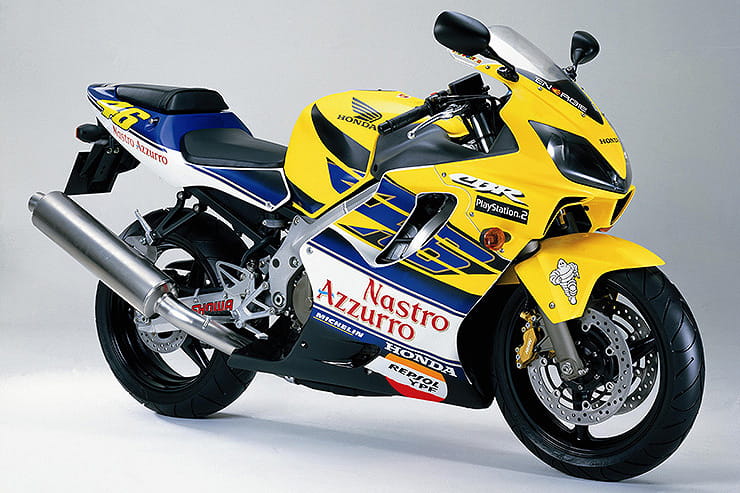