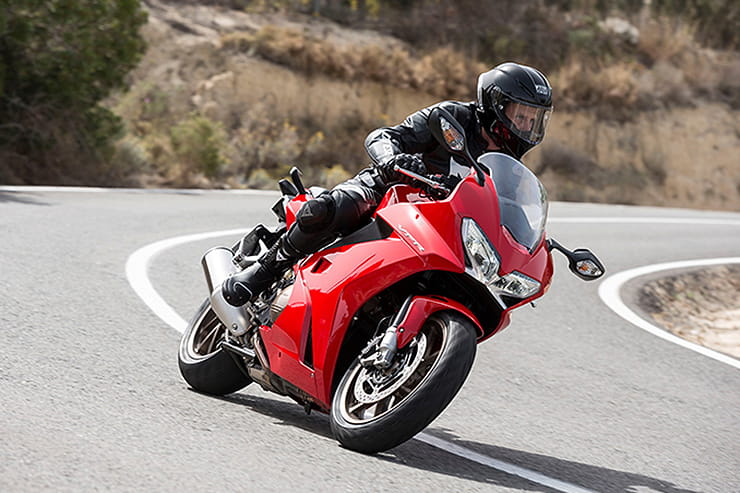 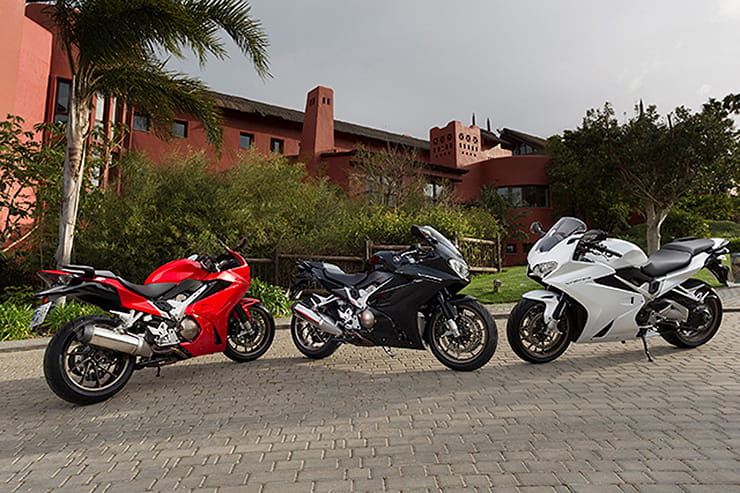 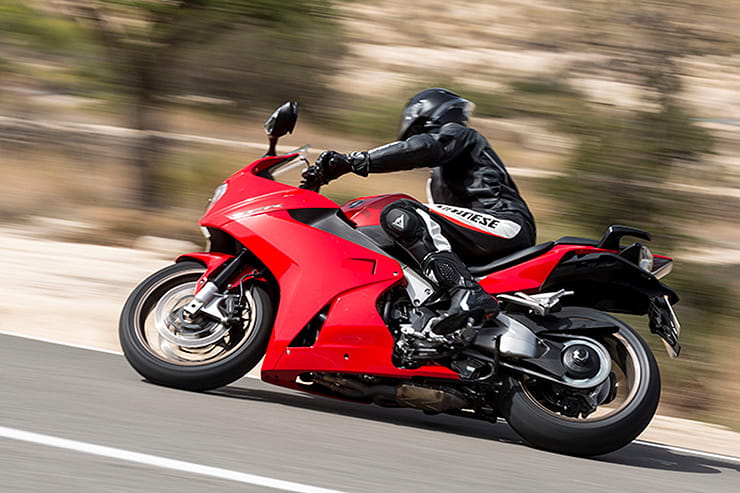 In 2014 Honda looked to past for inspiration on how to improve its legendary sports tourer – the VFR800F. In a somewhat strange move, well strange until you remember how poorly received the ‘underseat pipe’ VFR generation generally was, Honda instead focused on its predecessor, the much-loved VFR800 Fi model. Honda’s theory was that owners of the Fi might be tempted to buy the new model because as well as packing lots of modern tech, it looked like the older bike. In practice this theory fell apart due to the fact that at over £10k the new VFR was very expensive and as the Fi was such a good bike (and virtually unbreakable) few owners really saw the need to update! With new bike sales slow the VFR was soon discounted and faced with a wave of new opposition such as the Kawasaki Z1000SX and Yamaha Tracer 900, the VFR800F’s lack of capacity and old-school feel saw it struggle even more. Nowadays, however, the used market sees this long-established middleweight sports tourer seem an all-together more appealing, if still slightly costly, option.

Honda are still trying to get £9999 for a brand new VFR800F, however if you look at dealers’ online listings you can easily pick up a new one (or a pre-registered model) for £9500 with full luggage or a sports exhaust or as low as £8500 for an ex-demo with minimal (less than 2000) mileage. If you want to get an early 2014 bike your search will start at £5500 for a tidy bike in a dealership with private sales dipping just under £5000. At this price you can often also get full luggage included, but the pay-off will be a higher mileage. Spend £6000 and you can get a bike with roughly 10,000 miles on its clocks and full luggage, which isn’t bad value but not really deal of the decade when you look at the other used options out there.

The VFR’s stand-out feature has always been its V4 motor, which Honda attempted to inject with more flexibility through the VTEC system in 2003. Although initially panned, this is now the third generation of the system and the 2014 VFR’s ECU and VTEC has been refined to make it far better in its performance. Gone is the jerk when transferring from two to four valves and now the only indication is a lovely change in sound and a dollop of extra power. Is it enough to make the V4 competitive against bigger capacity rivals? While on the go it is nice and relaxed to use with a wide spread of power, it does struggle when fully-loaded with a pillion and luggage in a way that a litre bike, or Yamaha’s triple, doesn’t. It’s not a bad motor at all and for solo riding is good, however it could have be so much better if Honda had just given it a bit more capacity to allow it to hold its own.

Despite updates to the electrical systems, the 2014 VFR’s V4 is basically identical to that used in the previous generation of VFR with small changes to the cam timing and valve overlap/duration. While this isn’t great news for fans of sporty sports touring, it does mean that the VFR remains extremely reliable and it is hard to find anyone who has suffered any major issues at all. The only thing to be wary of is the 14,000-mile valve clearance check, which is a bill of around £600 from a Honda dealer due to the work involved. The gearbox is also solid and, believe it or not, the VFR800F was the first Honda to be offered with the option of a quickshifter – have that Mr Fireblade owner! A few owners report that the finish on the exhaust is a bit disappointing with it tarnishing quite quickly but overall, it’s a VFR, which is generally reckoned to stand for Very F-ing Reliable... 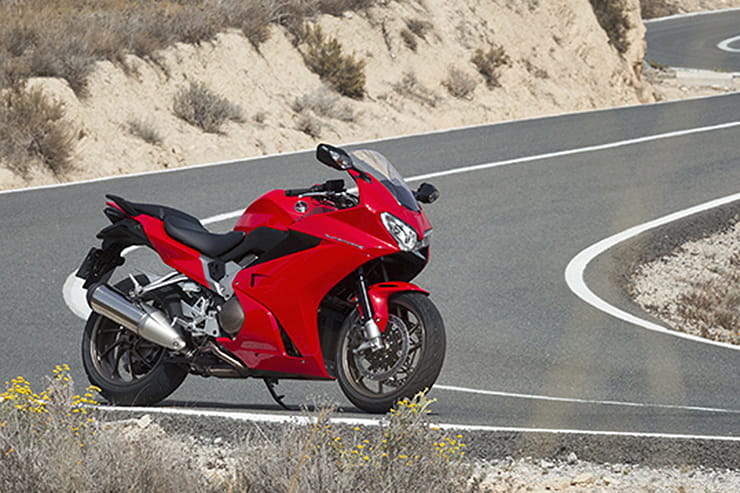 Honda claim economy figures of just over 50mph during general use and a tank range of nearly 240 miles, which owners seem to back up. A few have even managed to tip over the 250-mile mark without having to fill up.

Honda didn’t alter the frame at all in the 2014 update however they did add a new 3kg lighter subframe and new aluminium Pro-arm single sided swingarm alongside heavily revised suspension. At the front end you now get chunky 43mm inverted forks while the rear is a revised monoshock. Do the updates make much of a difference? To be honest not a great deal. Honda have always aimed to give the VFR assured rather than sporty handling and when its rivals were big old busses this was a good theory as it made the VFR stand out as agile, however the sports touring world has changed. Nowadays the likes of the SX or Tracer have demonstrated that you can have a sporty sports tourer without compromising on stability and it has to be said the VFR now feel a little ponderous in comparison. Far from slow to turn, the VFR rolls into bends rather than flicks but once lent over is pleasingly surefooted, giving the overall impression of being quite long in its wheelbase. If you like a bike to be steady, controlled and reassuring in the bends the VFR certainly delivers but if you want to up the ante it isn’t really that kind of bike. That said, the new suspension is very plush in its feel and the VFR is easy work at slow speed thanks to a reasonably low seat height and good natural balance. When buying used there shouldn’t be too much to worry about in terms of the chassis but if the bike has been used through winter the eccentric adjuster on the swingarm may be starting to get full of grime, so check it moves nice and smoothly. Other than that it is the usual consumables check such as tyres, chain and sprockets and brake pads. Speaking of brakes...

Whoop, whoop, the VFR has joined the modern age and for 2014 gained radial brake calipers, which have ABS as standard. A good system, there is enough braking performance for road riding and they aren’t linked, which owners will probably appreciate. 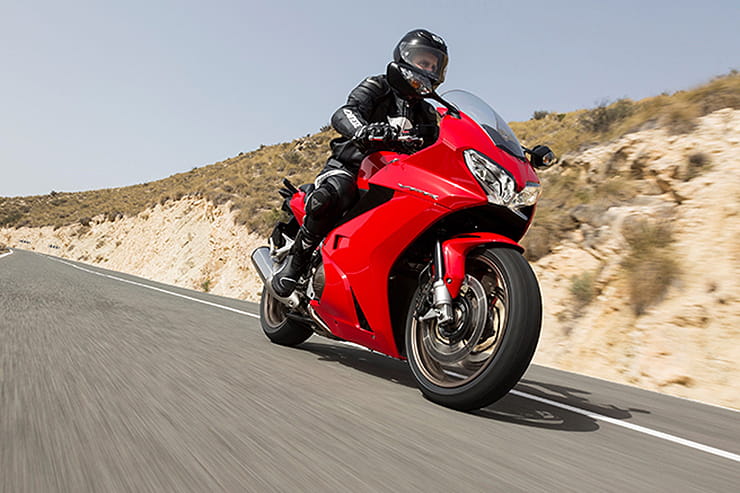 As you would expect from a sports tourer, the VFR can certainly tour. Pleasingly, five-stage heated grips arrived as standard on the VFR for 2014 (which link into the dash so you can easily see their heat level) alongside an adjustable seat (789/809mm). On the go the VFR’s fairing is effective and the screen the right side of low to actually be a worthy addition, although a taller screen is best added if you want to tour. Honda sell a 15mm spacer to add a bit of height to the bars for extra comfort, which is a nice touch, and the new side-mounted exhaust means that throw-over soft panniers can be used if you don’t want to buy the official Honda hard cases. Comfortable, packing decent touring-targeted features and reliable, yep, you can certainly tour on a VFR – and many, many owners do. Interestingly, owners also report the new lights are a noticeable improvement on the old model’s units.

The VFR gained a switchable traction control system for 2014, which is moderately effective but best thought of as a safety net rather than something to be relied upon as it lacks angle-sensitivity and is a bit basic. If you don’t get on with it you can turn it off via the horrible after-thought of a switch on the bars. The self-cancelling indicators like to cancel  way too soon, which is irritating, but the dash is well laid out and easy to read with lots of useful information and heated grips are standard fitment – it’s just a shame there is no cruise control. If you want to add bits, there is an official quickshifter (up only) as well as the usual hard luggage and racks. A lot of dealers fitted luggage to the VFR in an attempt to tempt buyers, so always buy a bike with it fitted rather than buy aftermarket as you will save cash. Moving away from Honda accessories, chain lubing systems are common alongside taller screens and electrical accessory plug-in points.

There are a large number of riders who swear by the middleweight VFR model and there is no denying this is a bullet-proof bike that makes for a great do-it-all that even has a bit of character thanks to its VTEC V4 motor. It’s not the cheapest or most advanced sports tourer on the market but it has earned its reputation for sturdiness through covering lots of hard miles with very little reliability issues and that’s certainly not to be ignored, especially on a used bike.

Three things we love about the VFR… 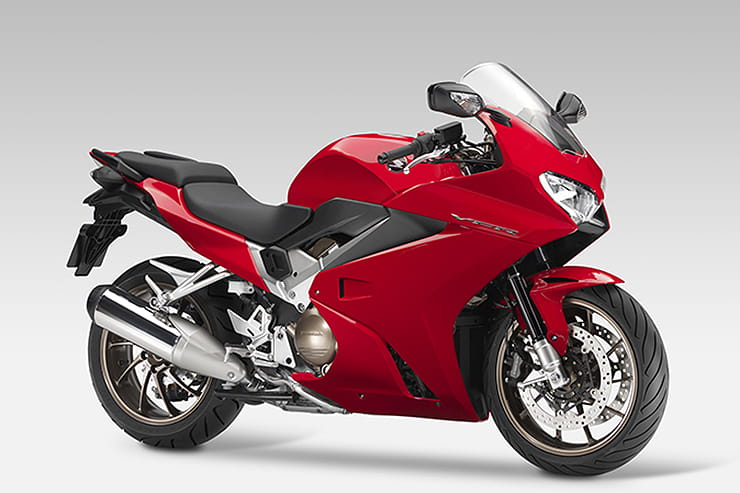