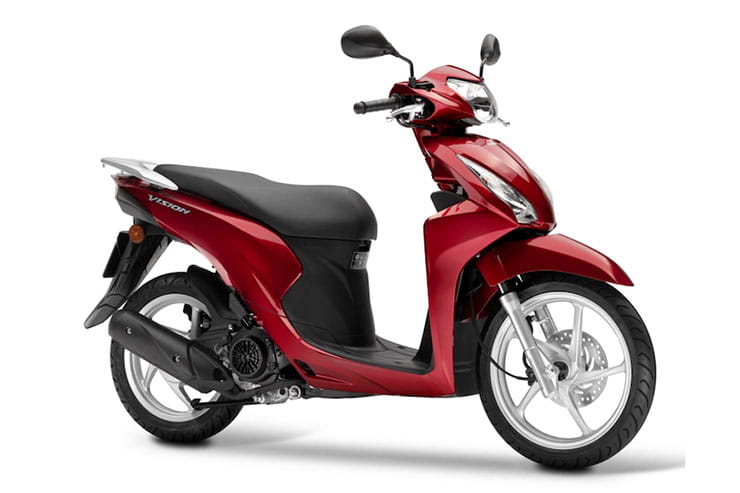 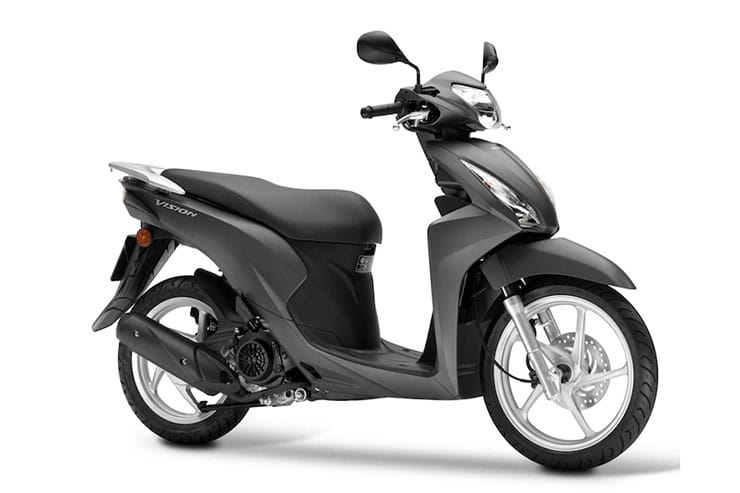 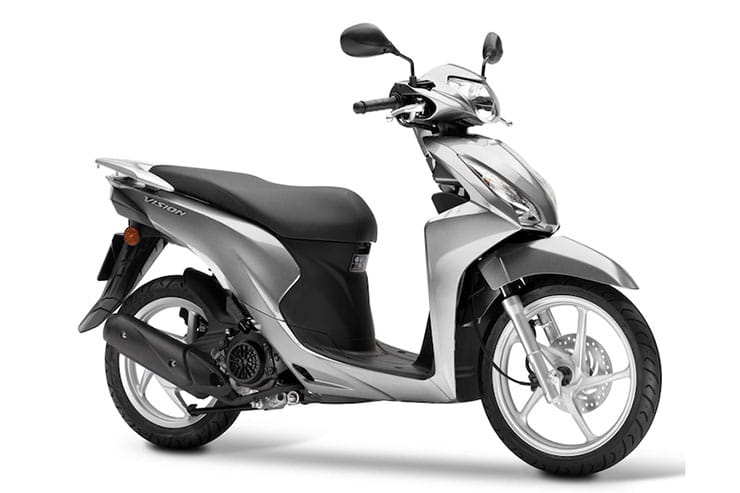 When it comes to practical ‘urban mobility’, or scooters to you and me, Japanese giant Honda has long been up there among the best, with brilliant machines such as its legendary Super Cub becoming worldwide best sellers. One of the current best of these is its 110cc Vision. Originally launched in 2011 as a simple, affordable (originally just £1800), economical and easy to ride it’s a brilliant urban runabout with enough power to keep up with traffic, a big front wheel to help make it both stable and nimble and glide over bumps and brilliant and yet also be cheap-as-chips economical, returning in excess of 140mpg.

It gained a major update in 2016, with a slightly bigger (16-inch) front wheel, revised styling and a tweaked engine to get through then Euro emissions regulations. That version is the one in our pictures here. While it’s now also been updated for 2021 to comply with Euro5 but also gets a significantly lighter frame, new ‘smart key’ ignition and slightly revised styling again. And although no longer £1800, the Vision remains a very affordable, effective, simple and trustworthy commuter than sits between 30mph 50s and more expensive 125s.

Although a quality Honda, the Vision 110 has always been affordable. The original back in 2011 was just £1800 new while the latest, updated for 2021 versions is now around £2400. While that’s still not as cheap as some offerings – you can get a Chinese built 125cc scooter for as little as £1300, for example – the extra gives you not just proven Honda reliability and durability but the peace of mind that comes with the Japanese marque’s extensive dealer network, two-year warranty and far better residual values. Older used examples still command prices approaching £1000 but we’d recommend a 16-on low-miler which could be yours for as £1300. 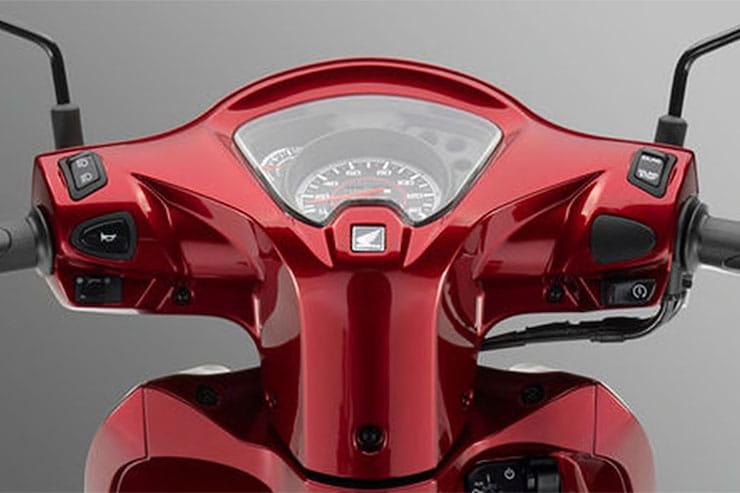 The Vision’s simple, straightforward air-cooled single is never going to break land speed records, but to get from one side of town to the other with ease it’s ideal. It 8.3bhp is enough for it top pull away from traffic lights smartly, which may be consideration if you’re also considering a 50 but are mindful of being crowded by double-decker buses, and it accelerates reasonably briskly to over 40mph, which is ideal for round town use. It tails off above 50mph, however, which makes dual carriageways or rings roads full of impatient 70mph drivers a little too daunting.

The Vision 110 is powered by a simple, 108cc, air-cooled four-stroke single cylinder engine with fuel injection and a conventional ‘CVT’ (Constantly Variable Transmission) scooter style, twist ‘n’ go gearbox. The original version was updated slightly in 2016 to meet Euro5 regulations and has been updated again in 2021 to meet the new Euro5 version. It’s largely understressed, has proven durability and reliability and the latest new versions benefit from a two year parts and labour warranty. 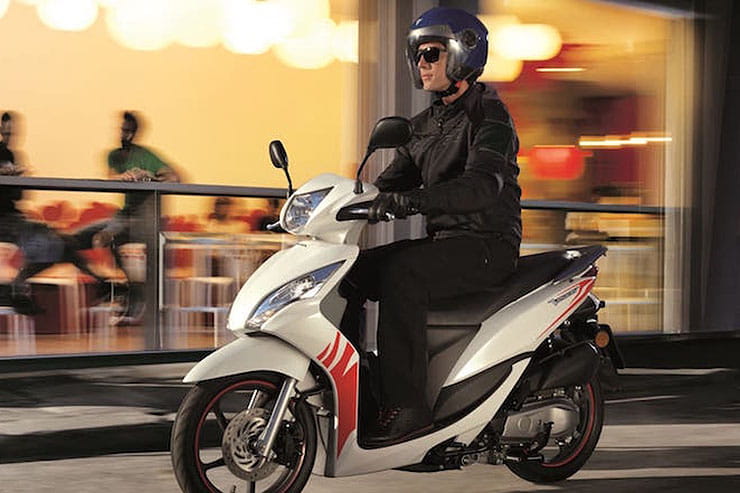 The Vision is built for economy rather than performance. Honda claims it is possible to achieve 141.8mpg – which maybe it can on a wind-free day without a slight uphill section to negotiate – but the best figure recorded in our book was 131.4mpg, but we’re not complaining. That combined with its 5.2-litre fuel tank easily retruns a range between refills of 150 miles plus.

As with all ‘twist and go’ scooters, the Honda is simple and fuss-free. Jump on, turn the key, put the brakes on and thumb the electric starter button. You might not hear the engine running in traffic because of the wraparound leg shields and rear-mounted engine muted exhaust note, so a brief twist of the throttle tube is needed to gently move forward.

Its ride and handling, being equipped with a larger front wheel, is light (something improved again with the lighter 2021 version), easy and impressively nimble. That said, the suspension is a little basic and if roads are particularly rough or pitted with potholes, you will notice it through the slightly feeble rear shock. 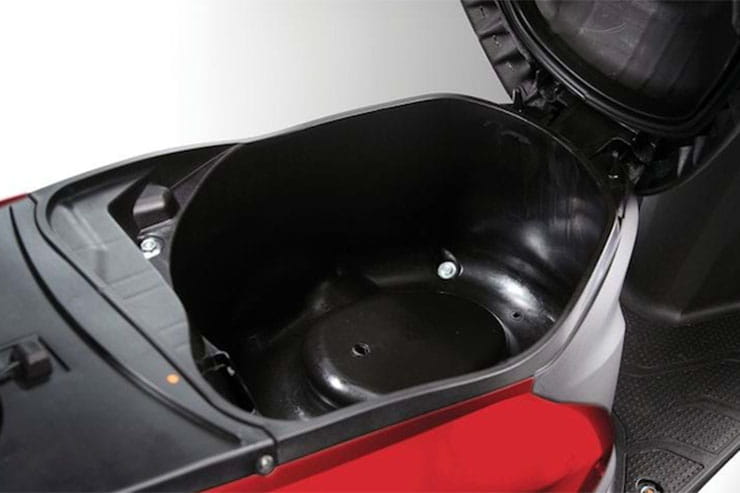 As with most scooters, the Vision has bicycle style brake levers – the right operating the front, the left the rear. The front brake itself is a decent disc with twin piston caliper with the rear being a drum. The Honda, however, takes this further because of the addition of Combined Braking System (CBS), which in short means the rear brake lever when used also partially operates the front brake for precise, reassuring stopping.

The seat is a seat and comfort is reasonable enough around town thanks to a natural riding position and footboasrds which enable the rider to move around and also carry a bag between your feet using the luggage hook. But this isn’t a machine for long distance both because of its meagre performance and lack of weather protection. It takes a pillion easily enough around town, and there are fold-down pillion pegs and a reasonable enough seat and grab handles to accommodate this, but performance is affected and it’s not recommended, again, over long distances.

The Vision is a fairly basic, uncomplicated ride but it does have all the basics a commuter requires. There’s a single analogue speedo between the bars containing a small digital LCD display for fuel gauge etc. The leg protectors keep off some of the road spray. The latest version gets Smart key ignition and the seat, as with most scooters, lifts up to a sizeable, secure underseat luggage compartment which, although not exactly cavernous, is enough to stow lightweight waterproofs and possibly an open-face helmet at the same time if you’re a practising origami specialist. 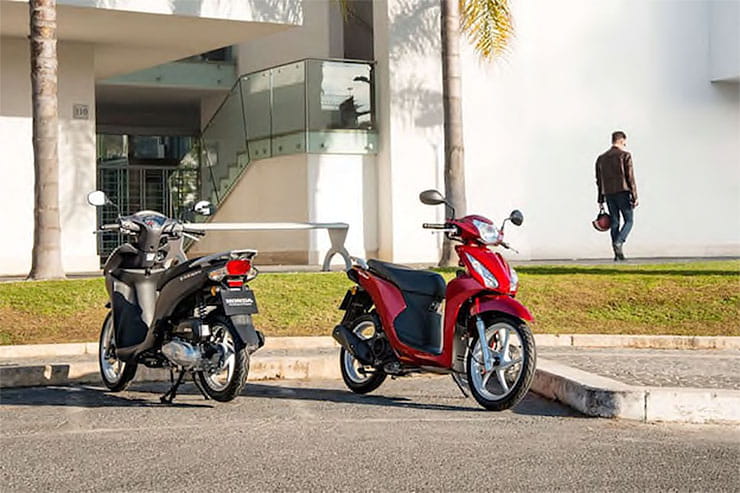 The Vision 110 has proved a big success for Honda since its introduction in 2011 and it’s not hard to see why. By providing effective, affordable, reliable transport it neatly fits in the gap between 50cc and more expensive 125cc versions. It’s also a stylish little number and wouldn’t look amiss parked outside one of the many coffee shops packed with the young and trendy or senior and cool. Because of all this the Vision still makes perfect sense – and is a much more attractive proposition to riding on a steamed-up bus!

Three things we love about the Vision…