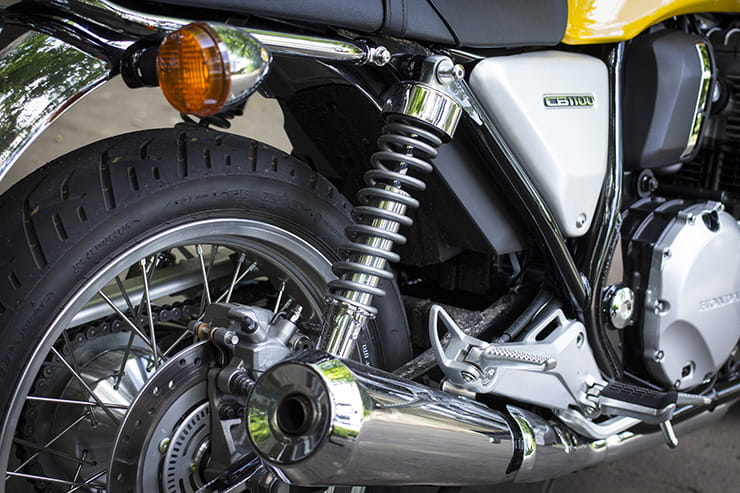 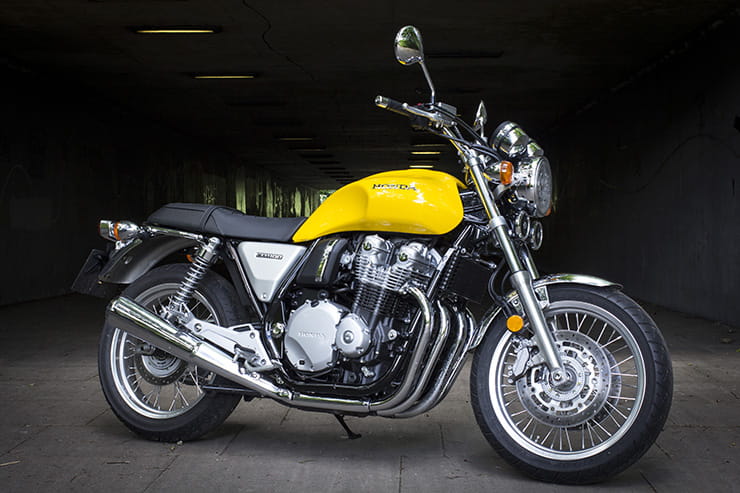 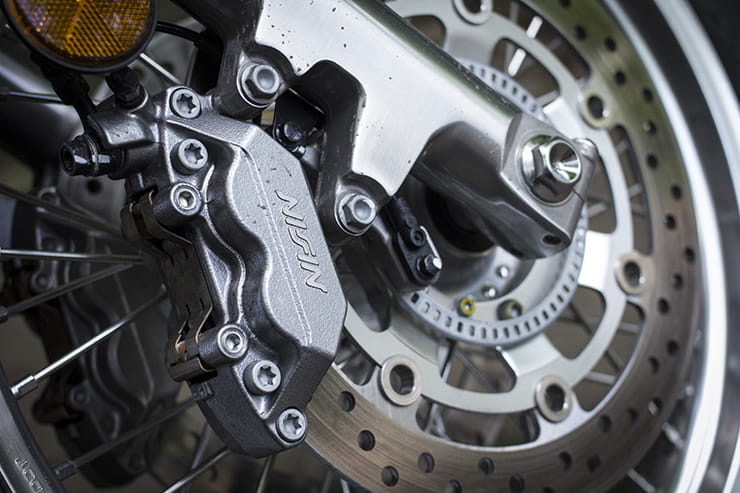 It’s easy to read the spec sheet and dismiss Honda’s CB1100EX - until you ride one!
Steve Rose BikeSocial Publisher

Here’s the fantasy. I’m guessing most of us would love a bike like the cool CB750 café racer on the left in our garage. Looks pretty simple; buy an old CB750, strip off the unnecessary stuff, fit a new tank, seat unit, clip on bars etc and, off you go, right?

Er, no. To build a bike this good takes a lot of time and effort from a whole bunch of different craftsmen. It might look simple, but, trust us, it isn’t. This lovely-looking special cost over £11,000 to build. 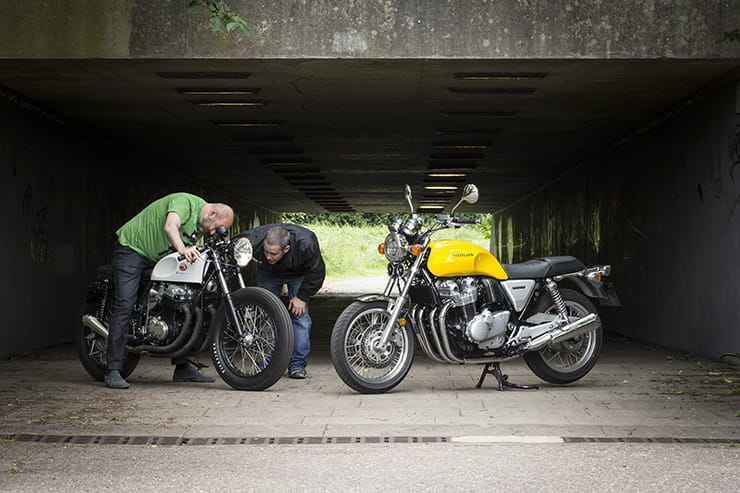 For less than that you can buy the bike on the left (above), which not only runs about a thousand times better, but is faster, smoother, a lot easier to live with, can be bought from and serviced by your local Honda dealer and comes with a manufacturer warranty. Truth is, if it were our money, there’s no contest.

It’s easy to read the spec sheet and dismiss Honda’s CB1100EX as not powerful enough, not special enough and maybe a bit pricey. Until you ride one, when you realise that having a smooth, torquey, easy-to-use engine is far more important than some numbers in a brochure.

In truth, you never notice. The CB1100 pulls strongly from tickover, has enough torque to leave the world and associated four-wheeled nonsense behind and (and this is the killer) because the speedo only goes up to 120mph, you get the childishly satisfying sight of a couple of analogue needles almost off the scale at not-too-much-above motorway speeds. 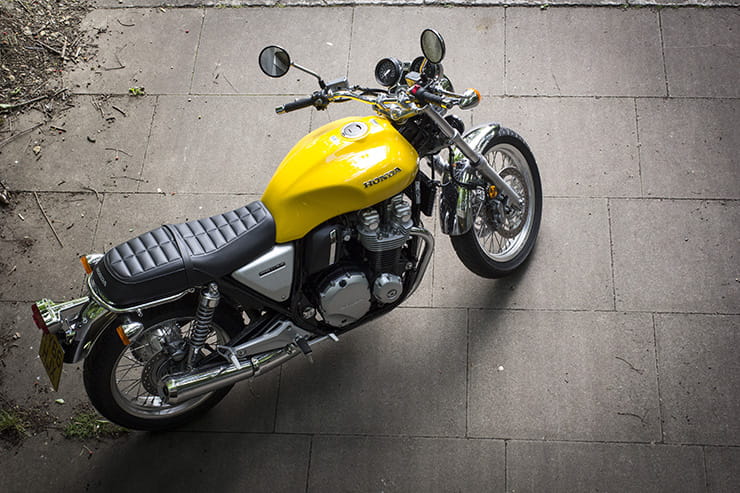 I thought Euro-4 had killed-off the last of the big air-cooled engines (Euro-3 had already killed off most of them), but somehow Honda (like BMW with the R-Nine-T) decided to do the development to keep this one legal. By all accounts, that’s a lot of work. 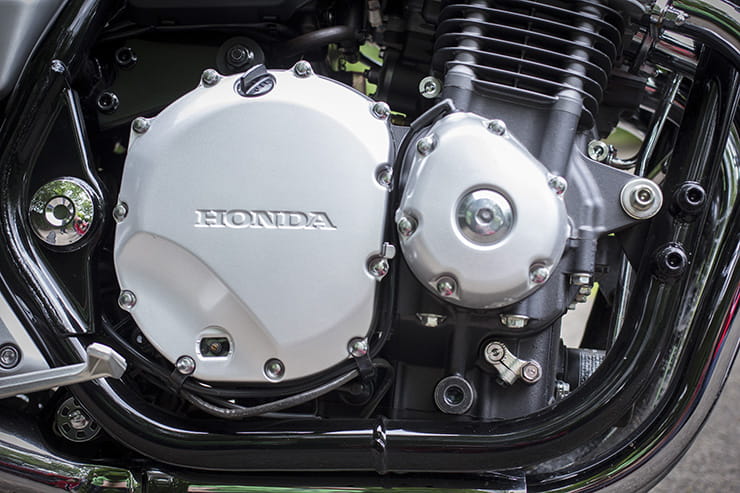 As the revs get higher you do feel the effect of the extra restriction necessary for emissions compliance. With all that gas travelling through such restrictive exhausts it’s amazing the CB doesn’t whistle. Honda has tried to engineer-in some character to make up for the Euro-numbing by phasing the cam timing to make low-down power a bit more lumpy. Which to riders of my generation serves to make it feel like our old CB900Fs when we’d fitted the Alfa 4-1 exhaust that mucked up the carburation and made it run rough below 4000rpm. Engineered-in Alfa-ness is maybe a step too far in the nostalgia wars, but it doesn’t affect the actual power delivery, just the feel. Very clever. 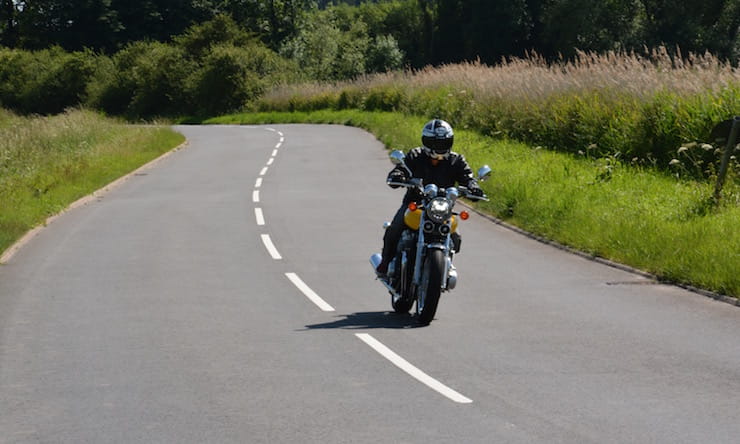 As for the rest of it, our appropriately-coloured bumble-bee replica flew through the countryside a lot more effectively than its appearance would suggest. The real Mr Bumble uses special fatty tissue that releases energy more efficiently than normal fat. Mr CB1100 just uses Honda’s secret magic formula that turns mediocre power figures and a simple chassis-and-suspension design into a surprisingly enjoyable experience. Well-chosen gear ratios help make the most of the power, equally well-chosen damping rates in the suspension make the CB a lot slicker through corners than you expect. If your nostalgia glands have been scanning ebay for a genuine 1970s Kawasaki or Suzuki superbike, you should try one of these. It has all the nostalgic feel, all the appeal of a summer’s evening scratching on inappropriate machinery, with far more performance, handling and (ABS-assisted) braking than even the most immaculate Suzuki GS1000 or Kawasaki Z1. 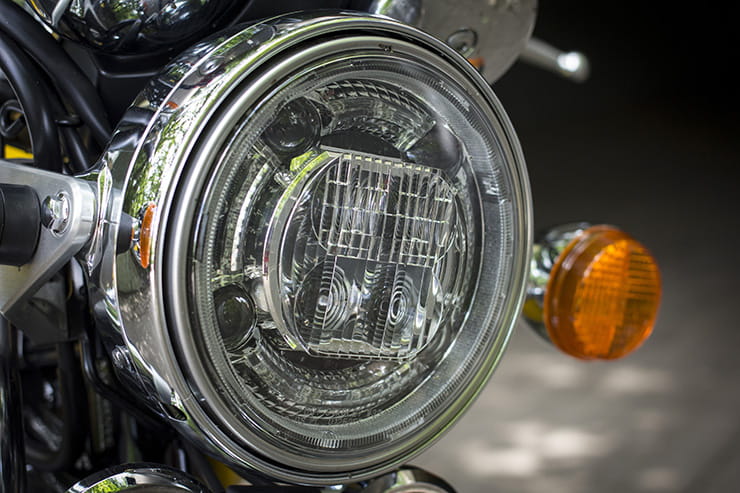 Look closer and you’ll see the steel cradle frame has a lot of bracing where it counts, the Showa front forks do both roadholding and ride quality and the simple-looking twin shock absorbers are equally competent.

There’s an honesty about the CB1100 as a Japanese retro bike that the far-Eastern, V-twin Harley clones can never achieve. Think ‘classic Japanese’ and this is the silhouette you imagine. Shame that Honda didn’t disguise the fuel-injection to look like carbs as Triumph do, that would have finished it off beautifully. 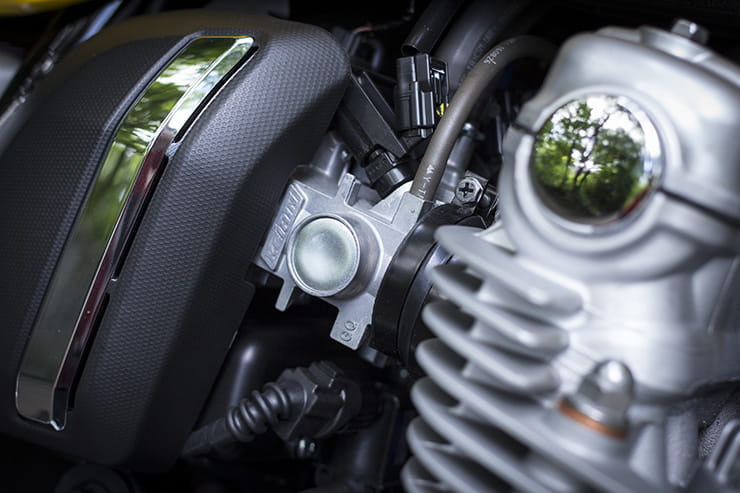 Going back to where we started, the CB1100EX is not a ‘cool-as’ hipster-sled, but it could form the basis for one without too much work and is a thousand times more enjoyable to ride than any 70s or 80s classic, no matter how deep your rose-tinted view of the world. It’s easy to live with, relatively cheap to run averages 50mpg being ridden like a press bike (sorry) and has enough performance to surprise its critics.

Whether it’s a better buy than a Harley Sportster or Triumph Bobber depends on your personal idea of cool. The Honda is certainly a more usable bike day-to-day than the competition, if maybe not quite as hip. If that matters, make sure you get a ride on them all. 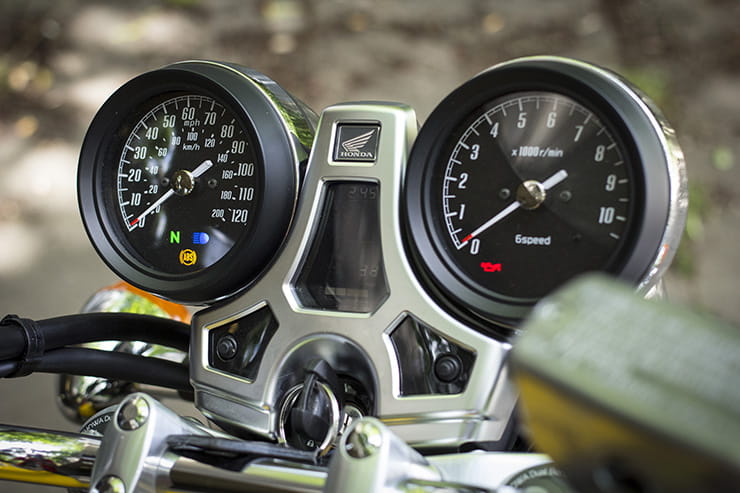 If I’m honest, the thought of riding the CB1100 for the first time was a daunting one. Probably more to do with the numbers on the side panel and the weight of the bike than anything else.

But after about 10 miles, riding a mix of dual carriageways and rural A and B roads, I’m happy to report that none of my worries were valid. Yes, the CB is a big heavy bike, but its weight is carried in such a way that moving the machine around is really not an issue, and when you’re out on the road it’s actually not very noticeable. The torque makes third gear overtakes a doddle, and I found the brakes to be excellent, with great feel from the twin Nissin calipers. Our test bike was fitted with Dunlop Sportmax tyres, which gave great feel and actually allowed the big CB to turn pretty quickly. 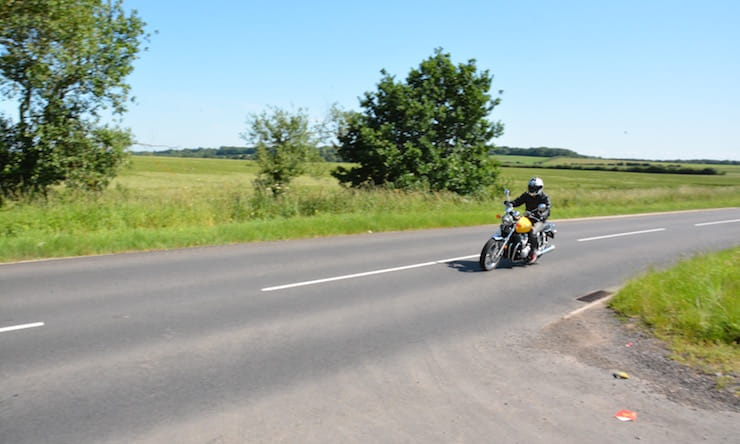 The Honda is most at home on nicely winding country roads, but is also really easy to ride in town. The hydraulic clutch is ‘two-finger’ light, and the wide bars give you plenty of leverage to haul through traffic. The mirrors work well and don’t vibrate much at motorway speeds – there was a bit of movement above this, but not so much that you couldn’t see what was happening.

My only complaint is that, after about an hour of riding, I would have a very numb backside! My commute to the office is about an hour and a half; by the time I’d got there, the small of my back is also quite sore. I understand I may not be the target audience for this bike, it’s probably designed for slightly larger riders who wouldn’t have to stretch to the bars as a much as I do. To be honest though, I couldn’t let such a small thing get in the way of me enjoying this bike.

I feel like the Honda has a split personality; one minute it’s a laid-back and relaxed cruiser that can take you wafting through town as you soak up the admiring glances. Ten minutes later you could be carving through the countryside, backed with an inline four soundtrack that’s difficult to match. 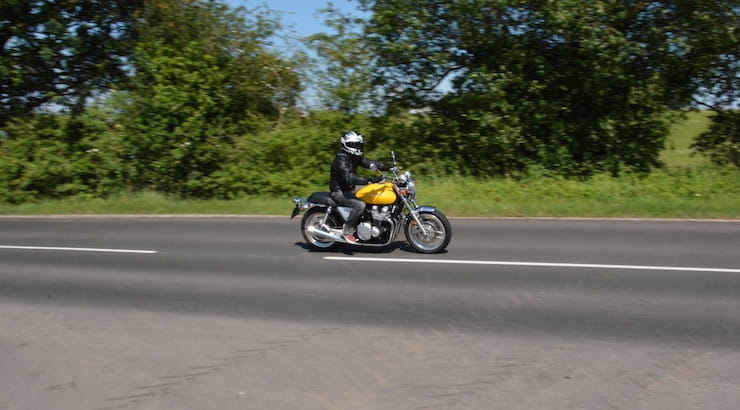