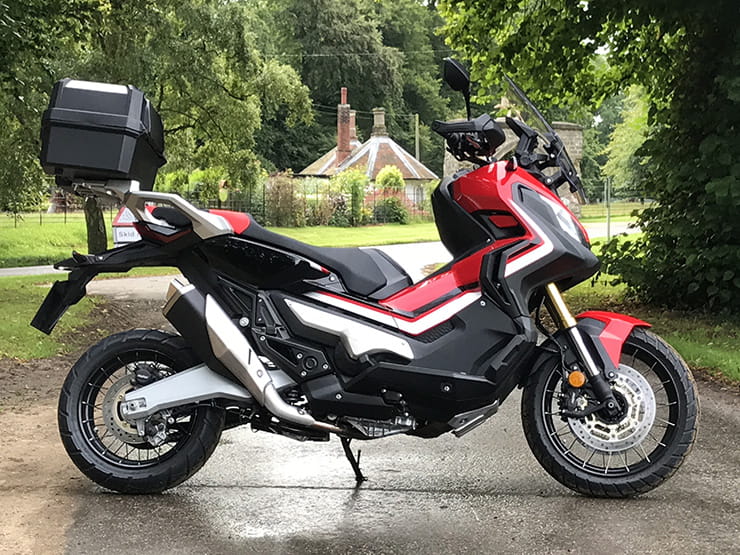 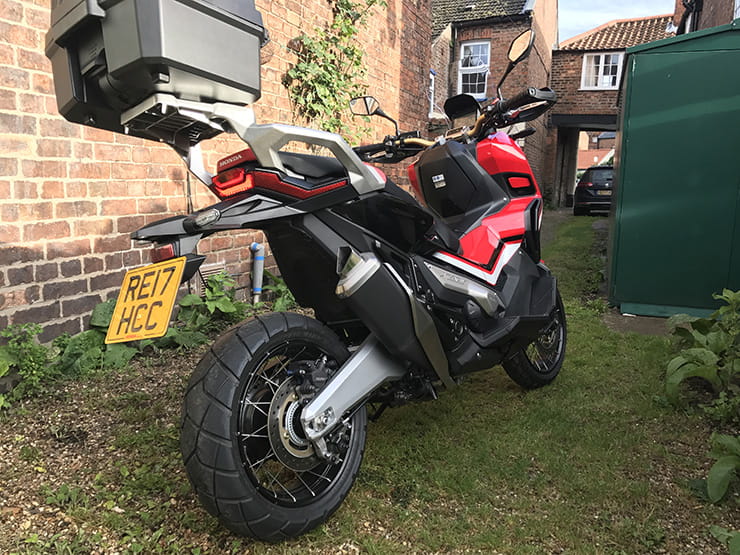 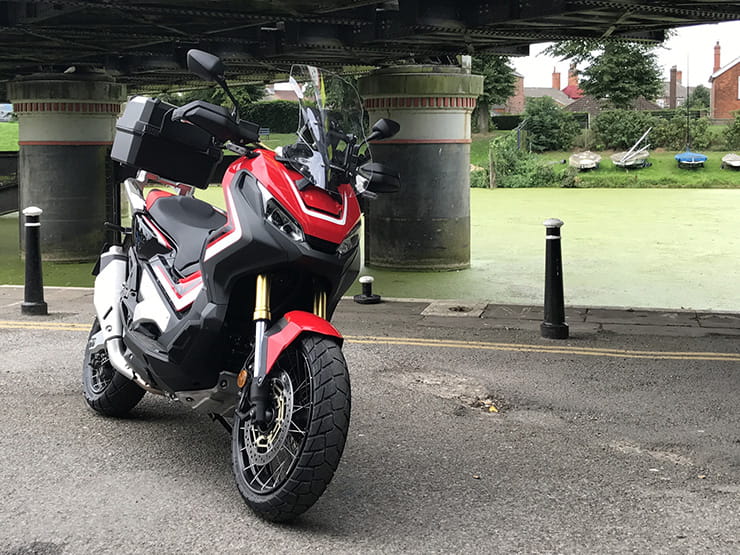 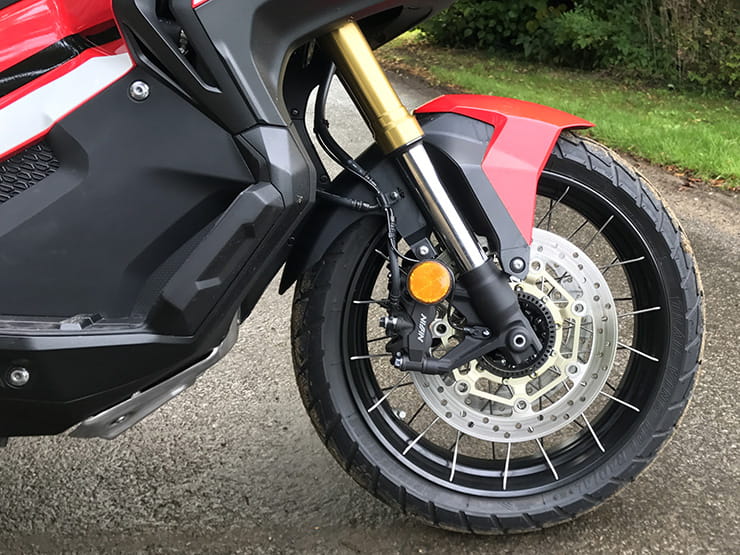 Scooter, adventure bike or just one of those weird things Honda builds from time to time?

The X-ADV is none of the above (okay, maybe the last one, but it’s better than the DN-01 or Vultus by some way). Let’s get the big question out of the way first. No, we don’t know what Honda’s X-ADV is either. At first glance it’s an off-road adventure scooter. Except it isn’t a scooter (because the engine is at the front with a conventional chain driven transmission) or an adventure bike (because your feet are in the wrong place for any kind of off-road control) or anything like we’ve seen before.

Actually that last bit isn’t true. What the X-ADV really is the first mass-production feet-first motorcycle. Older readers will remember those funny Quasar things built by mildly eccentric bearded riders in the ’70s and ’80s who were convinced that feet-forward was the future because of its stability, low centre-of-gravity and extra comfort.

The X-ADV sort of proves them right too, up to a point. Because as a package it works really well. Easy to ride through town in auto-mode like a scooter, with confident handling like a proper motorbike and excellent stability and wet weather handling. Plus, it looks as funky as two-wheeled transport gets and is put together in a way that makes every other maxi-scooter feel like they fell out of a Xmas cracker.

Think of it as some kind of sooper-dooper SP version of the NC750X if you like. That certainly helps justify the extra £3000 on the price. Almost £10k for a 50bhp, mongrel is a lot of money but the X-ADV works so well in most situations that the price seems like pretty good value, even if you can get an Africa Twin for not that much more.

The engine is basically the same twin cylinder unit as the NC750X with a few hundred extra rpm to help pull the excess weight around.  Give it some gas from the lights and (especially if you have the gearbox in manual mode) you’ll be surprised how sharply it gets off the line. The latest version of Honda’s Dual-Clutch-Transmission (DCT) is superb. I tend to run it in manual rather the automatic modes because the autos don’t always do what I want when I expect it. The other big benefit is that without the need for a clutch lever filtering through busy traffic becomes so much easier. It’s a great system and a much more useful new technology than any of the traction control, anti-wheelie or electronic suspension modes clogging up our handlebars these days. 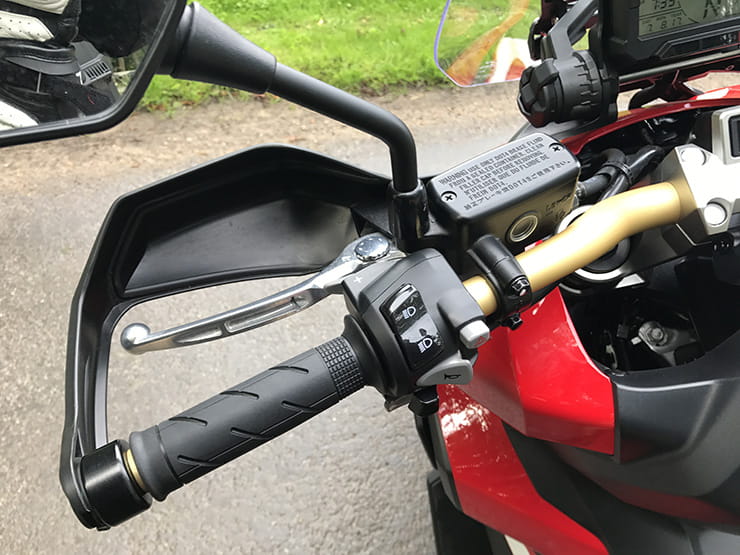 That’s a (rear) brake lever, not a clutch on the left handlebar. Gearshift paddles are front and rear of the switchgear

Top speed is somewhere north of 100mph (if you're interested in top speed, you bought the wrong bike) and it cruises at 80mph with ease and in comfort, thanks to a very effective fairing and screen. Ridden without thinking about it the X-ADV returns an impressive 65mpg. With a bit of consideration it can do 70mpg all day and still be ahead of any four-wheeler over distance.

The handling is the real surprise though. The X-ADV feels responsive on its suspension, steers quickly and accurately and is confident in corners like few other feet-forwards I’ve ridden. Front brakes are excellent but the rear needs a good tug on the lever to get any power – something I suspect has been built-in by Honda to prevent accidental skids. The handbrake (all DCT bikes have them because you can’t park up in gear on a hill) is in the right hand fairing panel. 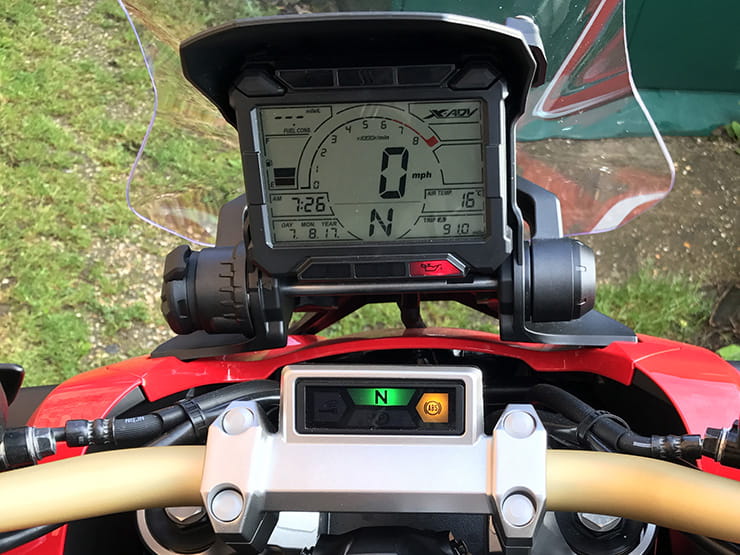 Living with it is good and bad. The keyless ignition and fuel filler works well, switchgear is simple to use, the screen adjusts easily (with two hands) and there’s a lot of underseat storage (and a 12v power outlet). Plus, having the back brake on the handlebars (like a scooter or push bike) adds a lot of low speed control and would allow you to dab a quick foot on a slippery roundabout if only the bodywork and wide seat didn’t get in the way.

And that’s the main issue I have with the X-ADV. Because the engine is at the front you can’t step through it like a scooter. But the wide seat, tall suspension and long footboards make it hard to get on and off without scuffing the bodywork with your boots and tricky to get both feet down even for a six-footer like me.

The other issue for what is otherwise a surprisingly competent alternative touring bike, is the comfort. The wide seat looks inviting, but because your feet are forward you can’t take any weight on them meaning everything goes through your backside, which starts to ache after less than 100 miles. I had plans to take the Honda on a 750 mile round-trip to Scotland, but didn’t because it would have been brilliant for the first two hours and a pain in the backside for the rest of it.

Other than that, the X-ADV is brilliant. Most of the time I loved it and looked forward to getting on it and just enjoying being on something so kooky, but so flipping good too. If your dealer has a demonstrator and you fancy trying something different, try one. I doubt you’ll be disappointed.

I was very sceptical about the X-ADV at first. At 238kg, it’s 6kg beefier than the Africa Twin. And it’s only £1611 cheaper. But having ridden it, I’ve really changed my opinion.

The weight is carried very low, so while it is heavy to push around, and the wide foot boards make it slightly trickier than a ‘normal’ motorcycle to paddle about, it’s very confidence-inspiring, even two-up. It’s helped by an impressively tight turning circle, which makes it great in tight spots or the city, and of course, there’s space enough under the seat to swallow a full-face lid (or enough snacks for my daughter and I to go on a mini adventure). 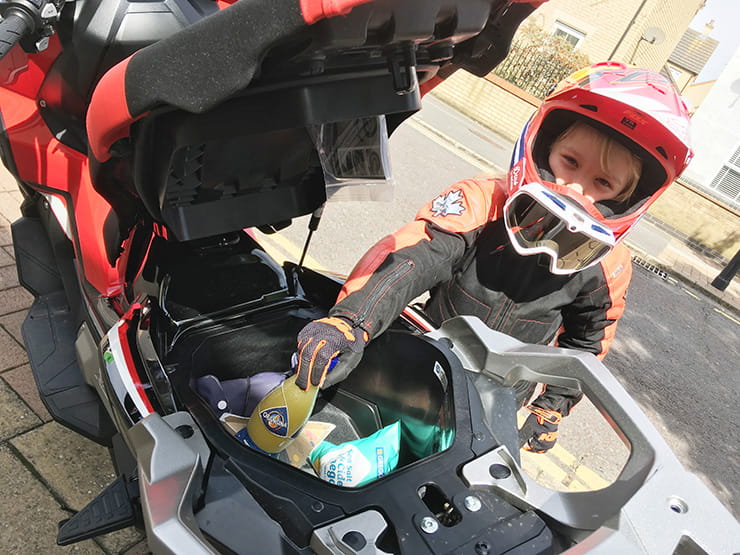 My daughter Georgie loved the big, wide pillion seat – it’s generous for rider and passenger – but my wife wasn’t quite so keen; she thought it was a little too wide and firm. Helen’s used to my KTM 1050 Adventure and its big top box that she leans against, so you’d be best taking your own partner to make their own decision. She also thought pot-holes were communicated a little harshly compared to my full-size adventurer…

But she loved the fact that we could explore the local tracks. I used to enjoy riding green lanes and byways on my Honda CRM250 years ago, but I’ve lost my touch (or my nerve). Now loose-surfaced tracks are about all I’ll tackle, but it suits this machine perfectly. I did consider taking it on some ‘proper’ lanes, but the exposed sump put me off a little, poking down below the bash-plate as it does.

The low weight, as well as the effective ABS, means bombing down the gravel tracks, dodging pot-holes and puddles, and running up the banked grass verges when the going got tough was easy, even with Helen on the back.

What really impressed me though was how easy it was to turn around – we stopped to get a few snaps of me riding on my own, which meant turning the bike through 180 degrees after each pass; even when doing it at the top of a hill, on an awkward camber, I was far more confident than I am on my tall and unwieldy KTM.

The X-ADV is not fast – pin the throttle back and the Honda takes a more leisurely approach to accelerating than I’m used to. But it’s not slow by any stretch, and it is economical – I saw 62mpg, and that was being aggressive on the throttle. The auto gearbox means Helen (and Georgie) were never thrown back or forth, and if I switched it to manual, using the paddles on the left lever to smoothly switch up and down, I didn’t feel I’d lost any of the control I’m used to with a clutch – dragging the left lever rear brake works a treat on walking-pace U-turns in first.

I found the screen a little annoying – the level of travel is good, but it can only be moved a small part of that with one hand while on the move – once you get to the bottom, you’ll need both hands, so have to stop. Oh, and those close-knit spokes on the small wheels make locking it up harder with a hefty chain.

I could soon pop a top-box on the back for a bit more storage to make Helen feel comfortable, then I don’t see any reason why we couldn’t discover some great parts of the UK and Europe together. Including some fire tracks to really make it a mini-adventure… 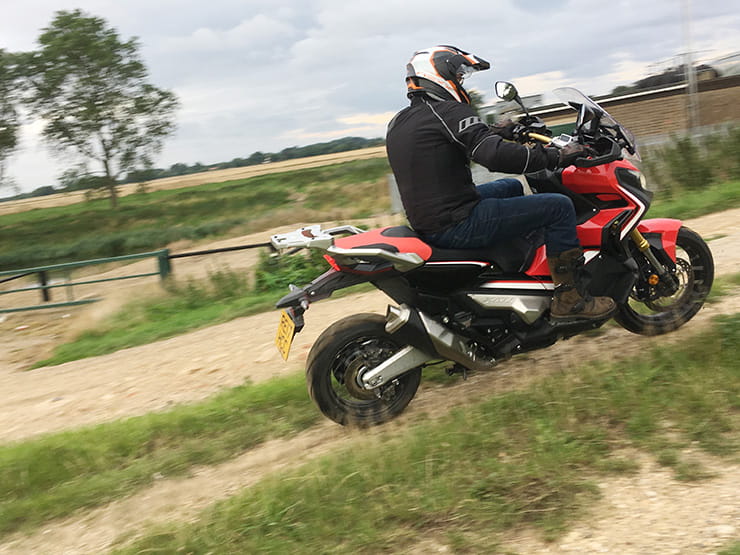