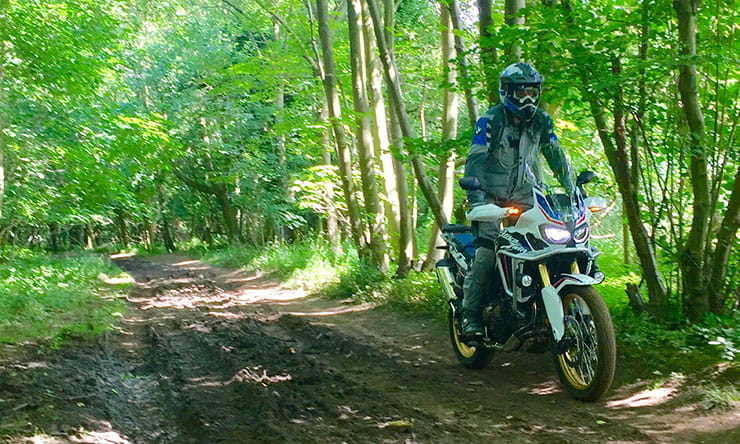 “Bloody hell, that’s a big old girl isn’t it?” So says the Aussie I get chatting too outside the Creg Ny Baa pub in the Isle of Man a couple of months ago. I almost called him a ‘cheeky bar steward’ as he was riding an old Yamaha Super Tenere. But was happy to sip my Diet Coke and admire the Africa Twin in the Isle of Man sunshine.

Sadly I never got the chance to do a lap when working in the Island, but the Africa Twin was a brilliant workhorse for Team Bike Social’s two-up daily commute to the paddock. Comfortable, stylish, economical and fun – the Africa Twin drew a crowd everywhere I parked it during my time over there.

The Aussie was wrong though. In truth, the Africa Twin feels like one of the lightest, slimmest and most manageable adventure bikes on sale.

Buoyed by my experience riding the bike for two days of reasonably serious off-road in Africa on the bike’s launch at the back end of last year, I was keen to change the tyres and get it on some local trails near where I live.

So kitted up with a set of Pirelli Skorpion Trail MT90 tyres running low pressures, and a Montesa 4Ride for Bike Social’s Michael Mann to ride and use, we head off in search of Africa Twin trail riding nirvana. Well, a few green lanes and byways at least.

The Montesa 4Ride is the opposite end of the scale when it comes to Honda dirt bikes, but we were keen to get a go off-road on it too. It’s a featherweight trials bike with a seat essentially and if you can’t get over obstacles on it then you should be banned from riding motorcycles forever. The Montesa weighs in at a paltry 81kg dry compared to the Africa Twin at 222kg dry for the ABS DCT bike. But the Africa Twin does do off-road, and well too, especially with some decent tyres on like the Pirellis. The new Skorpion Trail II tyres are superb off-road but sadly we couldn’t get a set in time for this test.

It was all going well and you can feel how good he suspension is off-road. And despite initial concerns about the DCT bike off-road it was tickling along nicely.

Nicely, that was, until I cross-rutted faster than a rat up a drain pipe and landed on my ribs. I was wearing body armour but the crash was enough to knock the wind out of me and flick me off the bike.

Luckily the standard Honda aftermarket crash bars did a fantastic job but I somehow managed to snap the hand guard off with my inner thigh. A few inches higher and I’d be in real trouble and speaking a few octaves up on the scale.

It was a fairly low-speed tumble but explains why I’ve already seen a few Africa Twins with aftermarket hand guards. A set of Barkbusters will be on the shopping list I reckon just in case of any future off-road excursions.

Meanwhile the Africa Twin continues what it does best – it’s the perfect daily bike and just gets on with it, whatever you throw at it. Just don’t fall off. But let’s face it, you didn’t need me to tell you that.