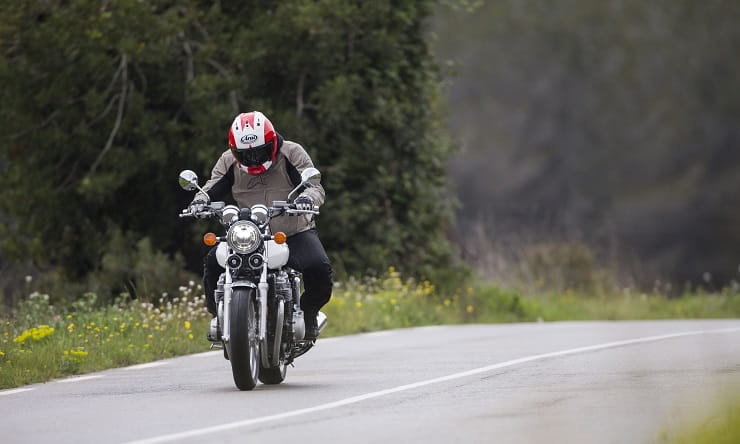 There wasn’t much wrong with the old CB1100 but they’ve fixed it anyway. And then some…

Honda’s in many ways astonishing retro roadster has, it must be said, been something of the ‘forgotten man’ in the current fashion for all things retro and café racer.

While Japanese rivals grab the headlines with talk of the ‘Dark Side’, Ducati goes all la-la ‘Land of Joy’ with its fashion-victim Scramblers and Triumph re-invents the British twin with some nice but, let’s face it, Thai-built water-pumpers, the understated CB, as first launched in the UK in 2013, was arguably the most authentic and, in many ways, appealing of an ever-growing bunch, not that most of us were convinced.

At its heart was an all-new, 1140cc, 16v, DOHC, air-cooled, four that was a technological wonder in its own right. In fact, as Honda then hadn’t built any air-cooled engines in over 20 years and its young engineers presumably equated them with flint tools, Honda, as part of the development process, sent the CB team to its Honda Collection Hall museum at Motegi, with instructions to ride and examine machines like the original CB750, CB900F and CB400/4 (which were the bike’s inspiration) and come back to recreate a CB for the modern age. 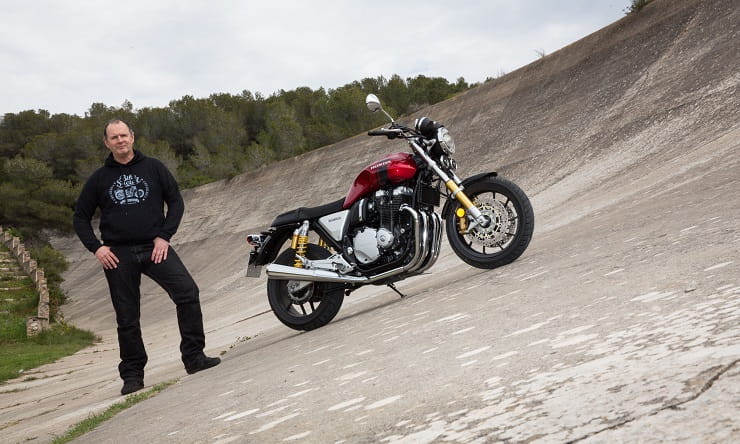 That those engineers did just that is a matter of record. The CB1100 engine they created blends influences from all those machines and is also fit for 21st century purpose. Yet the extent those engineers went to still beggars today. The cylinder fins, for example, were required, apparently, to be under 2mm thick in order to recreate the desirable cooling ‘pinking’ sound associated with classic aircooled machines. To create this, a new manufacturing technique had to be developed.

Yet despite such delectable details, not to mention reasonable performance, a far better attention to detail and build quality than any rival and pleasingly easy manners, the 2013 CB1100 was not a sales success. Not in Britain anyway.

Some blamed the CB’s slightly underwhelming 88bhp performance compared to the excitement generated by the concept bike first shown at the 2008 Tokyo Show. Others cited incorrect period details like cast not wire wheels and a plain seat. Others still the ‘too-small’ 14.5-litre fuel tank; fairly hefty price tag and a lack of character. The CB11 wasn’t a bad bike, far from it. It was actually a best seller in Japan for two years on the trot. But over here, glorious-looking engine apart, it wasn’t quite what it could have been, either.

Those misgivings prompted a fairly swift revamp into the CB1100EX of 2014, which gained wire wheels, a bigger, 17.5 litre tank and a few styling tweaks but you had to look pretty hard to sport the differences and, arguably, it still wasn’t enough. 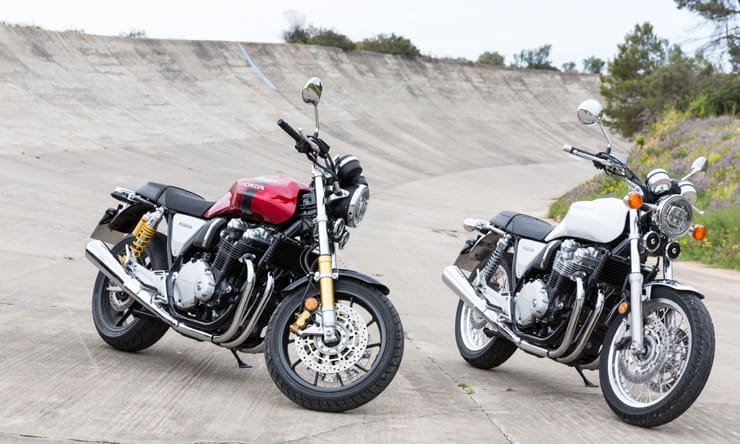 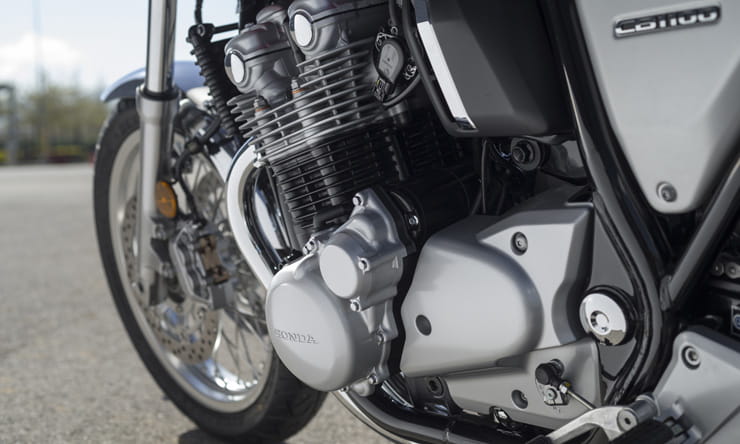 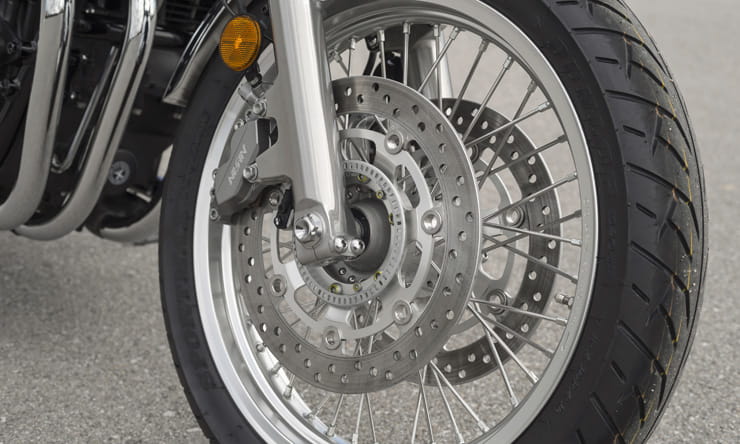 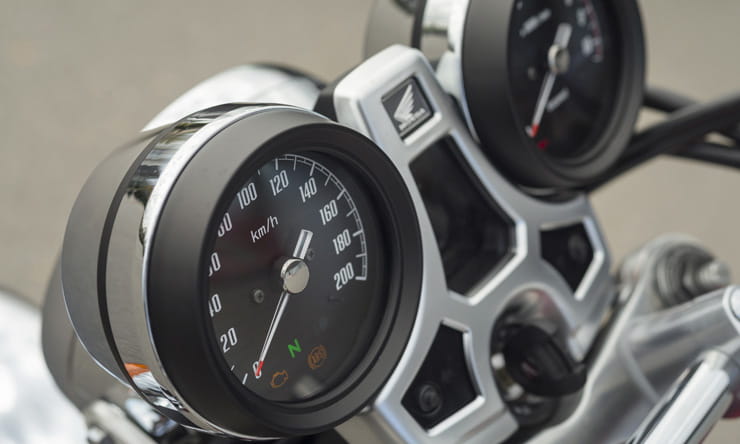 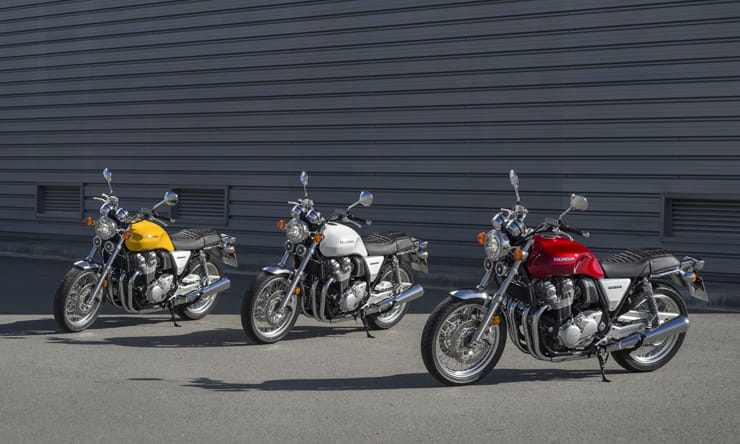 Which leads us to 2017 and, with the onset of Euro4, like with many bikes this year, the CB1100’s biggest overhaul yet. And on the evidence of Bikesocial’s first ride at its world press launch in Barcelona this week, Honda might – just MIGHT – have finally got its big retro four right.

While at a cursory glance the CB11 looks little different from before there’s actually a whole host of revisions, tweaks and additions throughout the bike.

First and most importantly, there’s now not ONE CB1100 – but TWO. For 2017, and in response to years of public clammour for a ‘performance CB1100’, two variants are now offered. These comprise the base, retro CB1100EX (the machine with the wire spoked wheels and silver forks in our pictures) plus the meaner, more aggressive CB1100RS (cast wheels, gold forks and red fuel tank), which is based on the EX but has higher spec suspension, brakes and wheels, more sporty riding position and a host of cosmetic mods – but we’ll come back to that later.

Instead let’s start with the standard CB1100EX which itself has sufficient improvements and changes to warrant being called a whole new bike.

First there’s that glorious engine. The need to comply with Euro4 prompted changes in itself but Honda has also taken the opportunity to enhance the character of the motor with revised valve timing on two of the four cylinders to produce a more ‘curdle-ly’ sensation – particularly at higher revs. This, combined with a new, shorter exhaust is intended to enhance the sound and feel of the CB. Or, as one senior Honda staffer told me ‘to turn up the CB volume’. This they’ve done. And with the switch to a six-speed gearbox a couple of years ago plus the new addition of a slipper clutch, the drivetrain has been significantly improved all round.

Simply put, the new CB1100EX’s saddle is a classy, pleasing, majestic and enjoyable place to be.

Second, there’s the overall style and look of the CB11 which has been markedly improved, too. A new, more curvaceous, 16.8-litre, ‘seamless’ fuel tank complete with flush filler immediately provides more stature and practicality while also reminding of predecessors like the Super Four and CB1000 ‘Big One’. The ribbed seat is more authentic, as are the new, brushed aluminium side panels. A new die-cast alloy top yoke (complete with pleasingly retro chrome top nut) is a classy touch, as are the alloy wire rims with zinc-plated spokes. While other improvements include: new 41mm Showa ‘Dual Bending Valve’ forks; new LED headlight and classic ‘Lucas-style’ taillight; chromed seat rails, improved chain and rear mudguard and even a more efficient sidestand. The list goes on.

The result, in the metal, in front of you, right now, can’t fail but simply smack you in the teeth. There’s no getting away from it: the CB1100 is a seriously classy motorcycle that puts most other so called retros to shame. This is a bike with not only a correct, purpose-built, air-cooled motor, it’s one that doesn’t scrimp on details or quality touches at all. Both levers are span-adjustable; the instruments comprise a classy collection of twin analogue chrome dials with a comprehensive LCD digital display for everything from fuel to gear indicator in-between. Everywhere that needs chrome has it, shocks, headlamp bowl and indicators included. While everything that looks like metal – is, mudguards, side panels and mirrors included. I’m sorry, but next to the CB11, some retros I could mention look simply fake and cheap.

But best of all is how the new CB1100EX goes. I must admit, having ridden the 2013 original at its world launch, I became a fan but also commented on its failings, I wasn’t expecting much to be different. How wrong was I. From the outset, the impeccable ergonomics and easy manageability were familiar but what was a revelation was the now stirring, characterful and evocative soundtrack and sensation from its reworked four and the improved ride and blissful, rolling steering from the uprated chassis.

No, it’s not revolutionized. With an unchanged ‘mere’ 88bhp the CB’s still no powerhouse, no thrilling weapon. But where before it was slightly bland, now it’s pleasing and more than enough while the ride, where once slightly soggy and inconsequential is now equally plush but also engaging enough and pleasing.

Simply put, the new CB1100EX’s saddle is a classy, pleasing, majestic and enjoyable place to be.

And if that all still sounds a little too ‘vanilla’ and average for you, there’s now the RS version, too. I have to admit, after being so impressed by the EX I’d ridden first, I was actually a little underwhelmed by the RS – initially at least. Although tempted by the prospect of the improved, sharpened ride offered by the RS’s fatter, more sophisticated, 43mm Showa forks and remote reservoir twin rear shocks, not to mention its radial Tokico brakes and 17-inch wheels in place of the EX’s 18s, much of the rest wasn’t ‘doing it’ for me. Yes, the ‘blacker’ cosmetics with black replacing most of the EX’s chrome, blacker engine and flat but textured seat was certainly meaner, moodier and done well, but it isn’t to my taste. While the thicker seat and flatter, narrower bars give a more hunched, lower, more aggressive riding position that at first I struggled to adapt to.

But not long later, after finally attuning via a series of Spanish twisties, it also became clear that the RS certainly has the tauter, more controlled ride and its combination of its changes (which also add up to a sharper rake and trail) make it a sharper, more precise more involving steerer than the distinctly more laid back EX.

Or, to put it another way, where at first I preferred the EX thinking it the better, classier, more rounded bike, by the end of our ride I loved them both, but for distinctly different reasons.

It’s been a while coming but, on this showing, maybe, just maybe, the Honda’s CB1100 has at last come of age. There’s a number of reasons for this.

First, the host of cosmetic and quality improvements and additions now, for my money, mark the CB1100 out as far and away the classiest, most authentic, most tactile and pleasing of all the retro roadsters – and in that I’m not just talking about budget Bonnevilles or novice-targetted Scramblers, I’m even including bikes like BMW’s superb R-NineT.

Second, the riding experience is now as it should be: classy, cultured and evocative. The engine changes add much needed character, the chassis tweaks take away the doubts and, though no rocketship or performance bike (even in RS guise) the CB now is truly a cultured, evocative ride that can’t fail to please.

And third, and perhaps best of all, there’s now TWO CB’s to choose from – both much better than before. The EX is the definitive retro with every box ticked, enough so to shame most rivals, while the RS, although unchanged performance-wise (and, yes, a Triumph Thruxton R will still leave it for dead), has enough handling and aplomb to start conjuring images of Freddie Spencer. And if that isn’t ‘mission accomplished’, I don’t know what is.

And the cherry on top? At £10,765 for the EX and £11,139 for the RS I reckon both now represent excellent value as well. At that price, the EX is a helluva lot of bike for not much more than the base and basic ‘Pure’ version of BM’s R-NineT, and I know which I’d rather have. As for the RS, well, with maybe a pipe and some sticky rubber, the Honda’s finally shaping up to be the retro café racer we always hoped it would be.