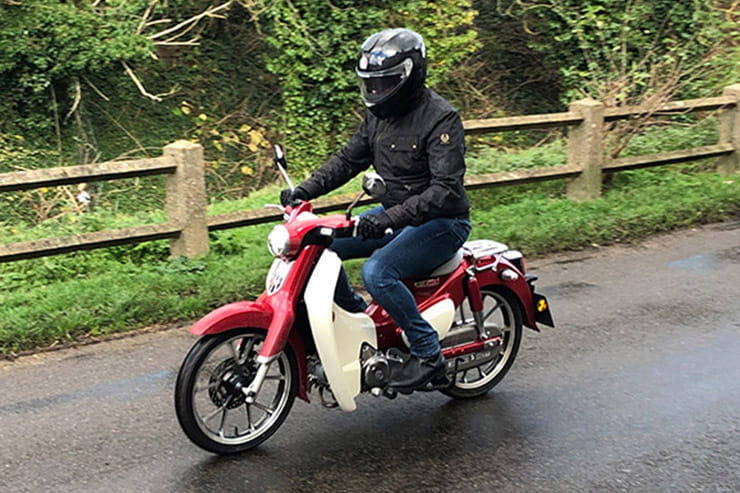 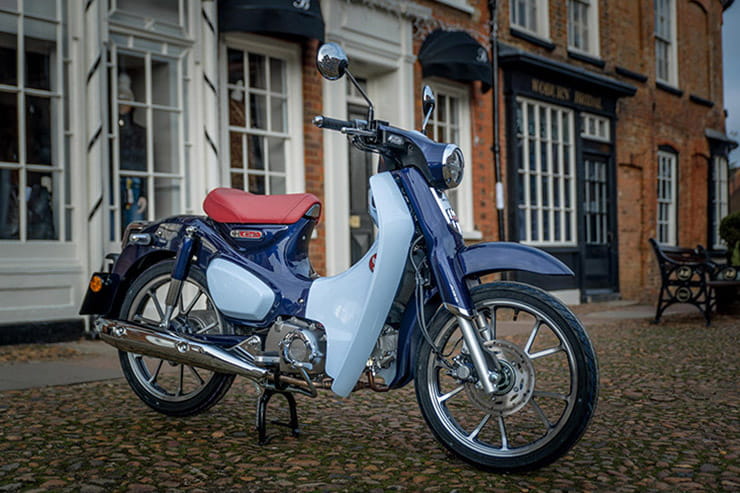 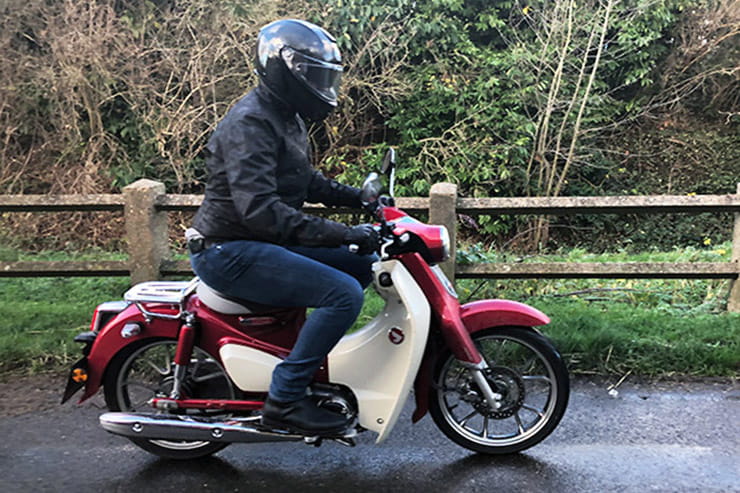 In 1958 Honda produced a motorcycle that was designed ‘to provide the joy of playing a useful part in people’s lives’ – the Super Cub C100. Sixty years later and after 100 million of them have rolled off the production line in their various guises since, the Super Cub clearly keeps on providing that joy the world over. BikeSocial’s Michael Mann spent a couple of weeks reviewing the latest version, the Honda Super Cub C125, and the accompanying permanent grin that comes as standard with every Super Cub purchase. 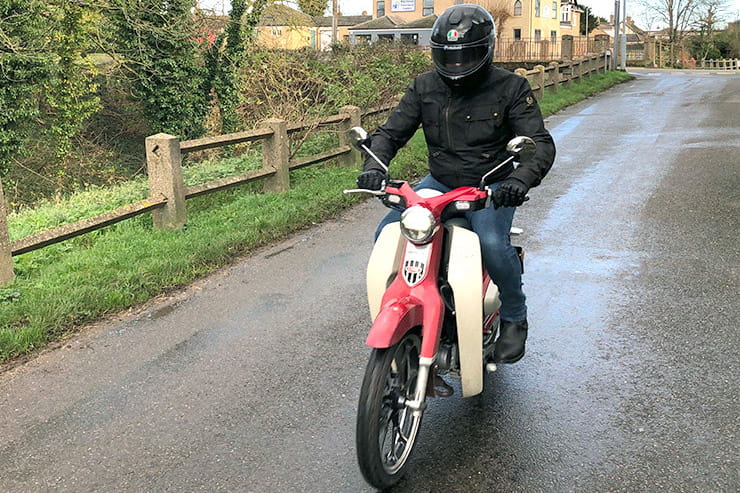 Available in two colour options known as Pearl Niltava Blue and Pearl Nebula Red even though at least half of the available coachwork is dirt-attracting white, the Super Cub has an on the road price of £3,399 and is available to order from dealers now.

For an even more budget form of commuting, PCP and HP finance packages are available from £65 per month, such as this example:

Almighty performance figures are not and were never the Super Cub’s domain but for the record, 9.5bhp (7.1kW) @ 7,500rpm slots it snuggly in between Honda stablemates the Monkey and Grom, both of which share the same engine, although with 7.7lb-ft (10.4Nm) @ 5,000rpm, it doesn’t compete with torque figures.

Using all the revs that the four-speed gearbox can muster plus a long run up will have 67mph showing on the speedo although it's nippy enough off the line to be favourite to 25mph versus most city traffic. 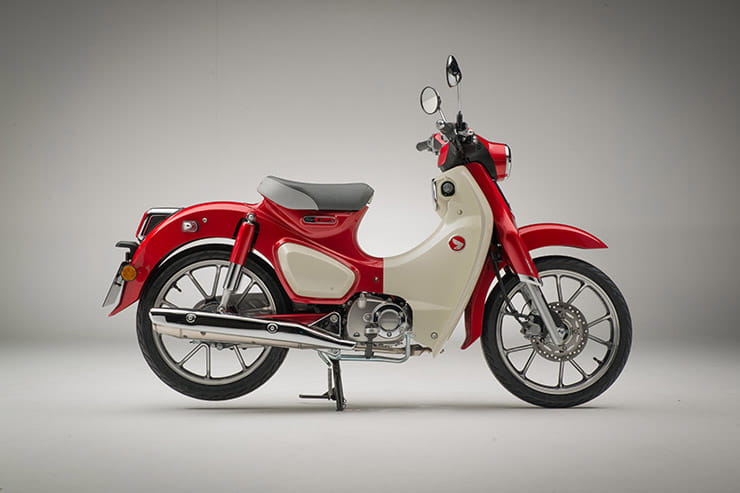 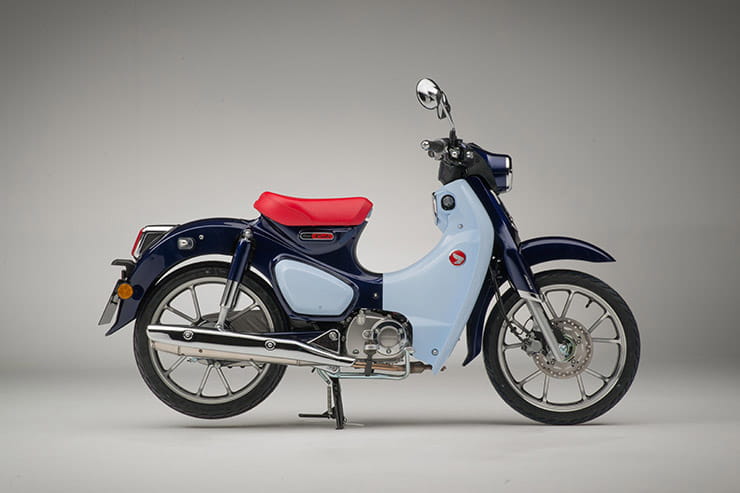 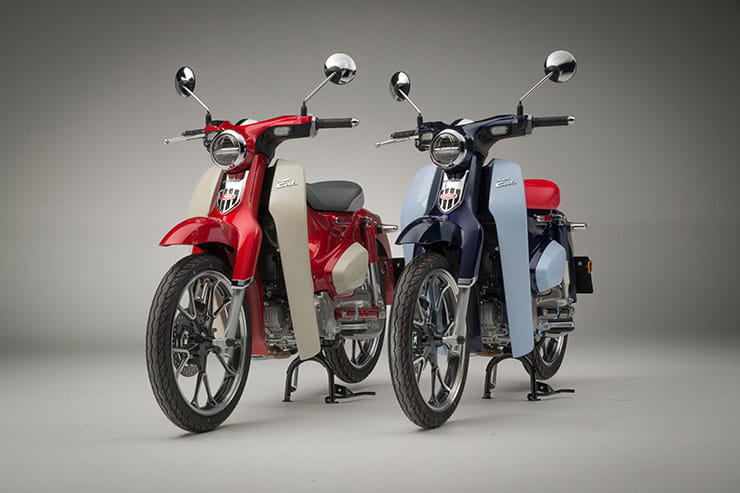 No messing around with clutches here either for take-off, landing or gear operation. Nope, just click down into first gear then twist ‘n go. Well, technically I suppose it’s known as an automatic centrifugal clutch but the gearbox is operated via the ball and heel-style rocker lever with a race ‘box down-down-down-down shift pattern for the four speeds. Folk law states that the gear lever was originally designed as a counter to dirty shoes for the businessman on his commute by using his ball and heel to change rather than hooking his left foot underneath to use his toes. It’s smooth enough change and quiet too, and if you’re in full attack mode then you can get away without rolling off the throttle at all, just.

The small, compact and lightweight 4-stroke, 2-valve, air-cooled, 125cc motor is shared with the Grom and Monkey from which 35mph is comfortably achievable in 2nd gear. With any smaller capacity, low power machine, momentum is the key to any ambitious ride. If you’re late for the dentist then keep the impetus up as well as the revs. My commute sees plenty of dual carriageway and a handful of A roads that are often busy so it’s more of a challenge to dash though and one that is so rewarding as I skim by wing mirrors and off into the distance towards BikeSocial HQ while the four-wheeled commuters sit and fume. Or, they pay no attention whatsoever. A fine example of which was one evening when coming off a roundabout from a dual and onto a single carriageway, a 1.6 Astra was easily embarrassed by the little Super Cub. The driver shouldn't be ashamed but to me it had the same sense of achievement as landing a telling blow to that pesky fly who’s been annoying you at dinner.

I don’t think the least powerful Honda would be challenging the most powerful, the mighty Fireblade, in a race to work but given the traffic situation and squeezing through little gaps then I reckon the tiddler wouldn’t be too far behind. Pound-for-pound as a small street commuter there’s not many that’d beat the Super Cub. 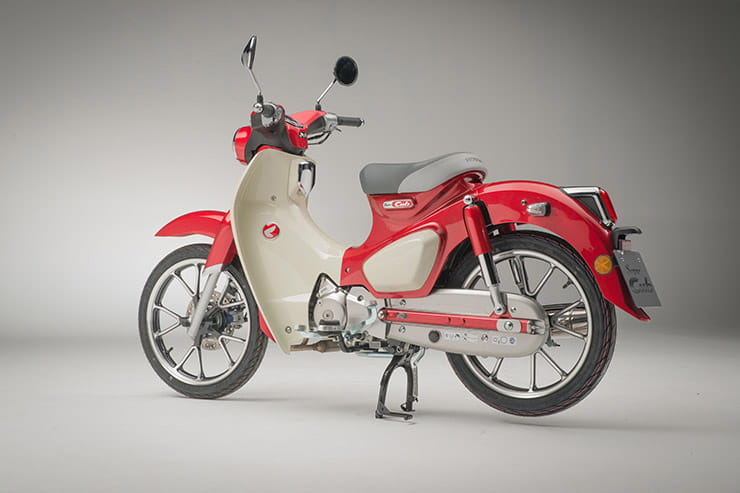 Discovering how to access the under-seat fuel tank filler takes longer than the process of filling. A tiny black rubber button sits under the left-side of the seat and once you’re in and done, the tiny 3.7 litre tank will soon be drained again – I got a serious sweat on after 75 miles after that little offensive orange light had been glowing for at least 5 of them. I might have eeked out another 5 miles before rolling to a stop but nowhere near the claimed range is 152 miles.

However, I could only squeeze in 2.69 litres (for a princely sum of £3.39 I hasten to add). Go figure. Equating to 126.63mpg on test vs the 188mpg claimed isn’t too shambolic considering how ragged I’d been riding.

Keep an eye on the digital fuel gauge, aforementioned warning light and digital trip and that's all you’ll need to maintain dignity.

A narrow chassis and a set of class defining 17” wheels offer a decent duo with which to skip through the traffic. It’s a handy combo that adds to its agility, and with skinny tyres that offer an ample amount of grip considering their likely user, the city soon becomes a race-track. I say class defining because many rivals, as you’ll see below, would be twist ‘n go scooters and the two other Honda’s that share the same engine, all have smaller wheels.

Conventional telescopic forks have replaced the old leading link style version and keep the ride reasonably comfortable. Again, bearing in mind the supposed target audience and the type of ride the Super Cub is designed for. Using every one of the those 9.5 horses on the B-roads and the 100mm travel of the telescopic forks (front) and 84mm on the twin shocks (rear) will shake you all over the place.

That sub-4 litre tank contributes to a fully laden wet weight of just 109kg making the Honda easy peasy to manoeuvre onto and off from the centre stand plus changing direction on the streets. 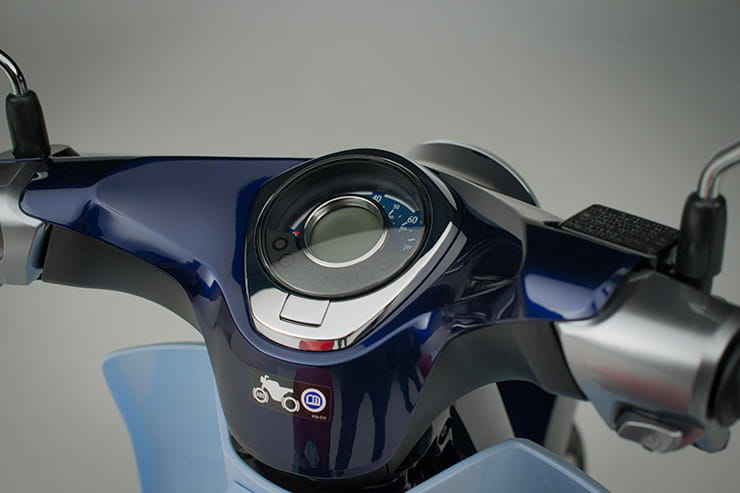 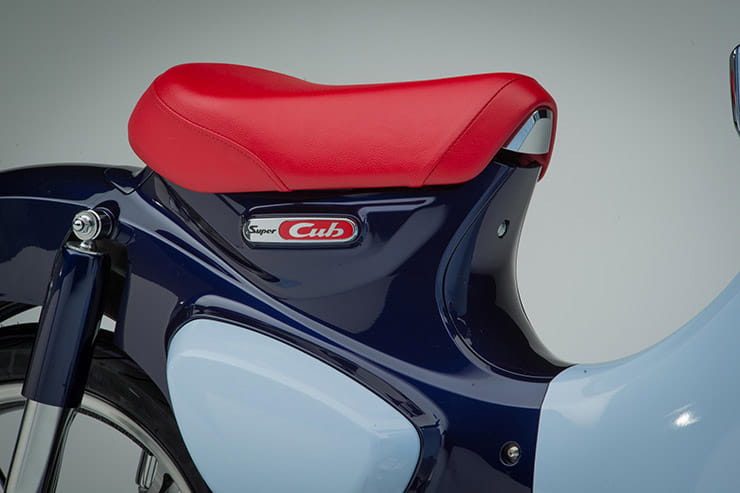 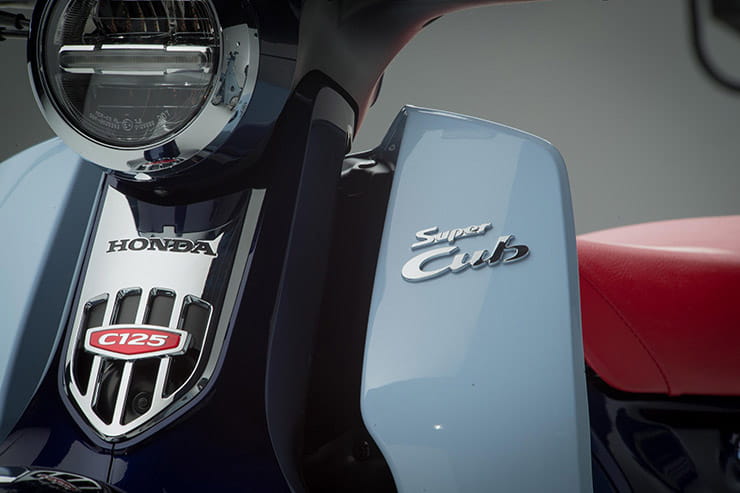 Single piston caliper halts single 220mm disc on the front with ease given the low power and weight combo. ABS is equipped and quite a challenge to utilise. While a 130mm drum on the rear is the secret grown-up toy. With no ABS, the rear wheel is therefore simple to lock for the inner hooligans among us.

The single saddle is plush enough to keep the short commutes nice and cosy while the riding position in terms of handlebar width, layout and distance from the rider’s body is top notch. And there’s enough room to slide backwards and forwards on the seat depending on your preferred riding style. Replacing a pillion seat is small luggage rack which is handy given there’s no under seat storage available.

The handle-bar mounted mirrors aren’t particularly useful unless your elbows require constant monitoring, though I am a fairly broad-shouldered chap. Easy to adjust mind, they’re on a simple, single and centrally-mounted rear pivot.

Once you get used to riding the Super Cub, not even the lack of room for your left foot is a concern. I have size 10 plates of meat and the left one can’t be rested on the just the peg, it ends up using either the up or down change part of the lever. 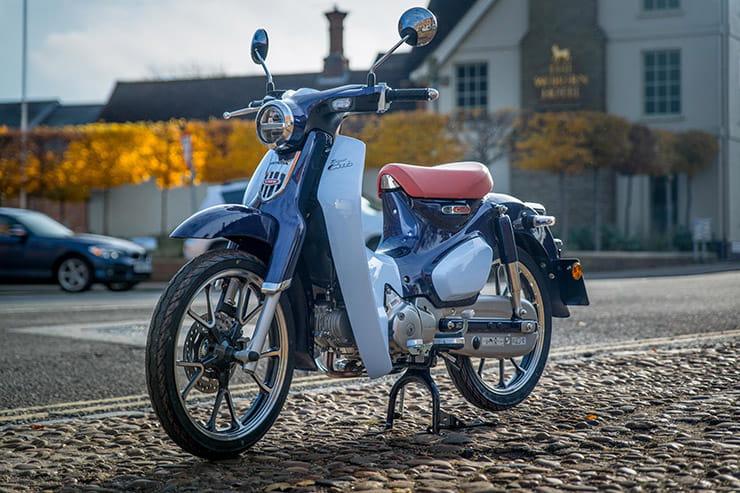 Not a great deal to write for this section. Other than the legal requirement of ABS (only on the front, in the case of 125cc and under) there’s not a lot else to mention other than the keyless ignition. The lightweight and thankfully non-cumbersome fob is easy to find space for in your pockets and has a 30m range. Don’t worry if you’ve stopped at the cash point or just filled up and head off to offer the cashier your pocket change, press and hold the bottom button on the key fob, and the option is disabled.

Front and rear LED lights plus an alarm and immobiliser are neat modern-day touches. 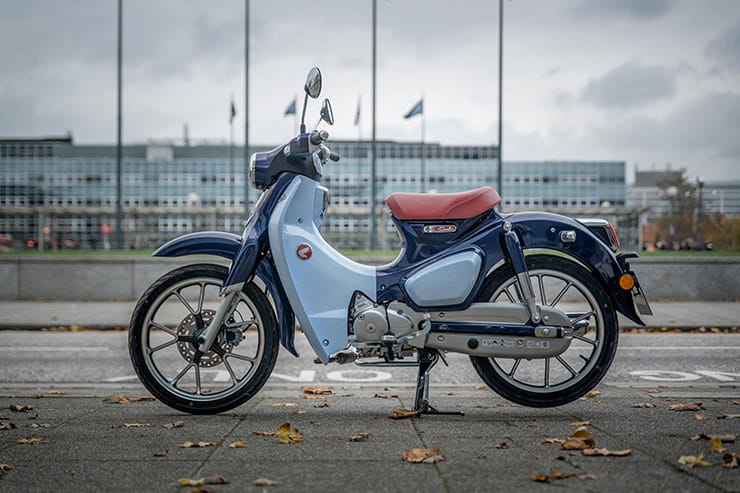 In terms of its commuting rivals, anything with two wheels and an engine, even those without an engine, could be considered. For style, price, ease of ride and certainly engine size then how about this selection, including two from the Super Cub’s own stable:

Other big players like Suzuki, Kawasaki, Aprilia and KTM all have 125s to offer, then there are the scooters and mopeds from Peugeot, Piaggio, Kymco and Lexmoto to consider as well as the dozens of other Chinese imports, all of which will do the job. Though none match the Honda for nostalgia value. 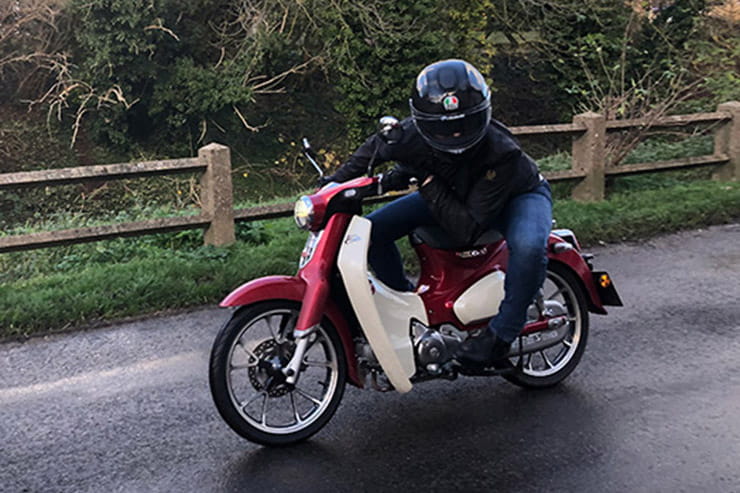 The heroic Honda Super Cub is like a sweet old grandmother – with its rich history, tradition and charm but sitting almost ungainly and out-of-place in the modern world. There’s a cuteness about its appearance and nature, like a classic that’s been meticulously restored, everyone you speak to knows about the model and it’s oh-so willing. It just wants to help – like a retired teacher who’s taking up a Saturday role at the local garden centre. However, despite being an immensely practical motorcycle, with no luggage space under the seat, the rack where the pillion seat would traditionally be is the only offering for non-rucksacks.

It can be ridden well within anyone's limits, and for those with a little more experience who have a city-style commute then there are few more enjoyable vehicles with which to venture. It's low cost motorcycling with a high-end enjoyment factor.

Three things I loved about the 2019 Honda Super Cub…

What does this all mean? Read the glossary of spec sheet terms here