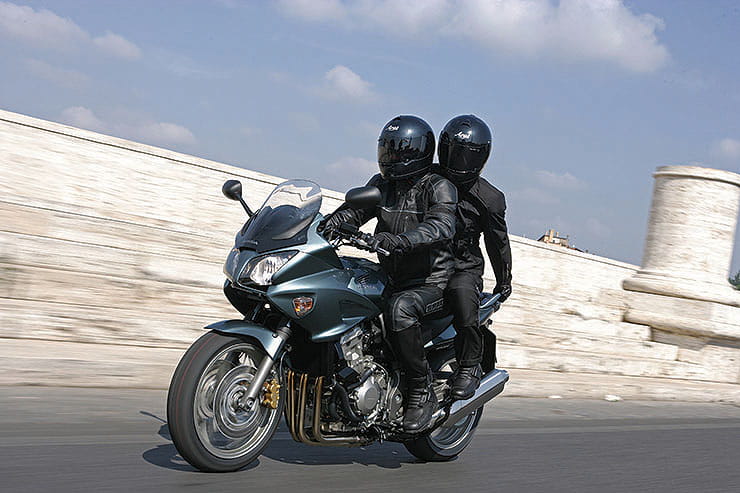 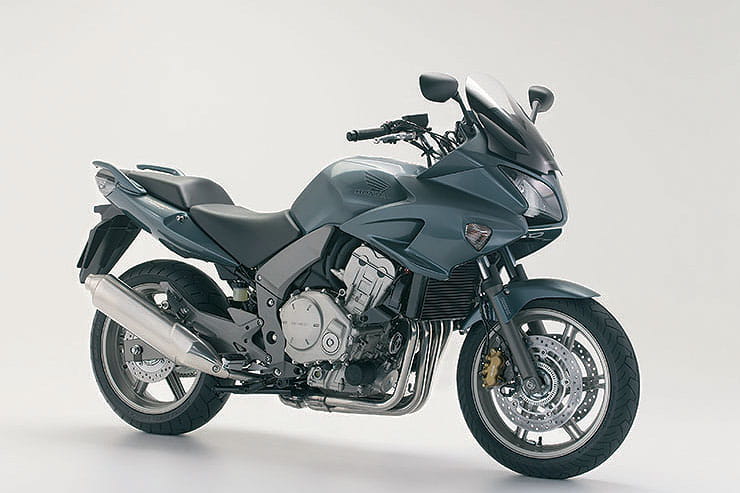 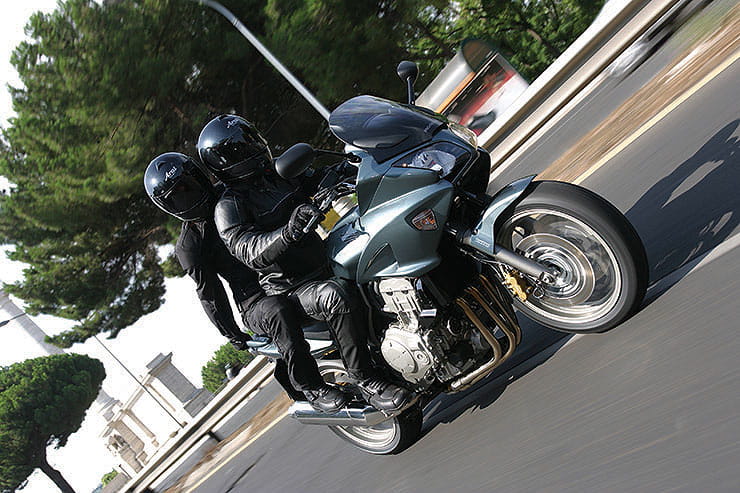 It would be very easy to look down your nose at the Honda CBF1000 because, let’s face facts, it isn’t the sexiest of bikes. And its muted paint schemes do little to highlight its best side or make it look more appealing. However write this excellent do-it-all off at your peril because what the CBF lacks in kerb appeal it more than makes up for in value, practicality and good old-fashioned useability. If you want a bike to provide simple two-wheeled transport with no fuss, no dramas and total reliability and comfort, the CBF1000 is your bike. It is the Ford Mondeo of the two-wheeled world and there is nothing wrong with that at all.

CBFs are used as workhorses and that means there are a lot of high-mile heroes out there with temptingly low price tags. You can pick up a 50,000-mile example for near to £2000 while a mid-20,000 mile one is closer to £2500. If it has been well looked after, that’s a lot of bike for next to no money. Up your budget to £3000 and you can get a really tidy example that has covered sub-20,000 miles while £3500-£4000 will get you a beauty that should also come with hard luggage. Prices for the heavily updated 2010 model start at £4000 however be wary as a lot of 2009 bikes were sold alongside the updated 2010 version, so ensure you are getting the right one! The 2010 bike has a black engine, the older generation’s motor is silver if you are unsure.

The CBF may be powered by a Fireblade engine but Honda have taken most of the sportsbike performance out of it and it now makes a peak power of just 96bhp, which is less than the CBR600F makes! But there is a positive note and that is the 68.6lb-ft of torque. A smooth, non-intimidating and very relaxed engine to ride, the CBF’s motor is ideal for easy-going cruising. It has a strong spread of thrust and you don’t really miss the peak power as it’s just not that kind of bike. If you want instant roll-on grunt, Honda have done a great job in retuning the engine. If, however, you want thrills that’s not really on the design spec...

When talking about the CBF’s motor you have to kick off with its reliability record, which is basically almost unblemished. These are simply unburstable engines and you will really struggle to find one with any major issues beyond the usual age-related wear and tear such as a reg/rec, generator or a sensor here and there. In theory the motor should be serviced every 4000 miles with the valve-clearances at 16,000 but it is almost certain they won’t need adjusting and many owners simply do the oil and filters themselves, so don’t expect a full service history. Again, a bike like this is owned by riders who are happy to get their hands dirty to save a few quid on service costs. The gearbox is just as reliable as the rest of the motor with no major issues and the exhaust is also fairly robust with most used bikes still running the OE system. As the CBF was Euro3-compliant, it is pleasingly lacking in emissions gubbins, which helps the exhaust’s life as it doesn’t run as hot. 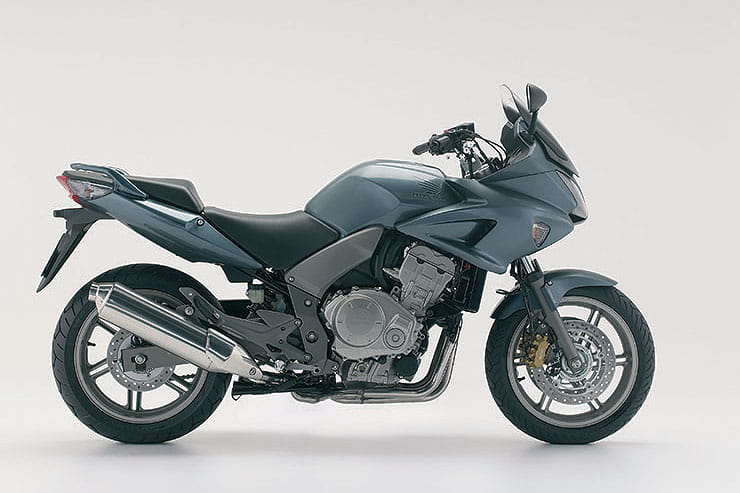 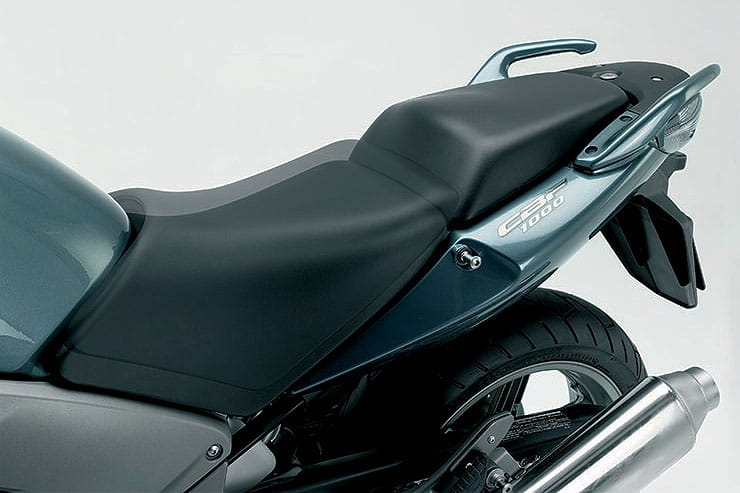 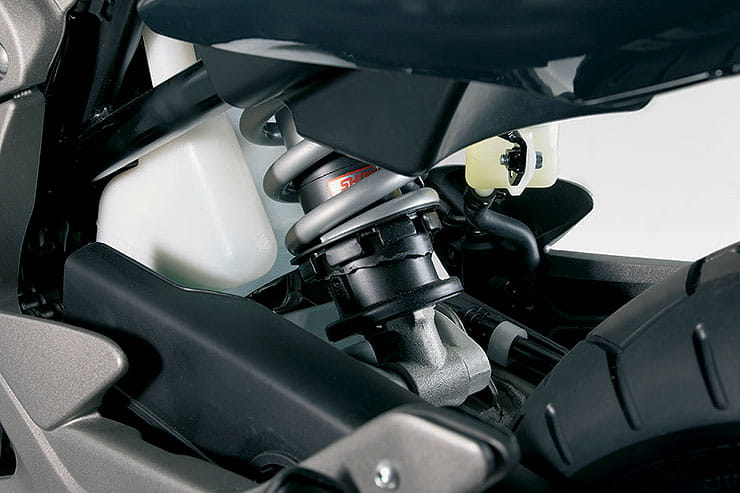 Armed with a 19-litre tank, the CBF is good for over 200 miles between fill-ups, which is great news for commuters. Owners argue the toss but anything from 45-70mpg seems achievable with most reckoning on getting mid-50s for their mpg.

The CBF1000 isn’t a bike with sporty handling at its core and due to its budget price tag you are buying a machine with a steel chassis, non-adjustable conventional forks and a shock that only allows the preload to be tweaked. That said, the CBF most certainly doesn’t disgrace itself in the bends and as long as you aren’t trying to go bananas it is fun to ride, although a bit limited on ground clearance. What it is, however, is very assured and that means it inspires lots of confidence and it is also more than happy with a pillion’s weight onboard. When buying used check the suspension as the shock isn’t rebuildable and chips or rust on the fork sliders will see seals leak at an alarming rate until the slider is replaced. A very few owners grumble about flaking paint on the engine but the vast majority report that the finish is superb on the CBF, so avoid a hound. As with any older bike that is generally used all year around, watch for seized suspension linkages and also ensure all the bearings are nice and smooth and don’t need replacing and the chain and sprockets have life left in them.

Here we have a point of debate as the CBF1000 comes in two forms – with C-ABS or without. If you buy a standard bike you get two-piston sliding calipers that are conventional in their operation while if you go for a C-ABS model you get three-piston sliding calipers that are linked front to back and have ABS. The easy way to identify is colour, three-piston ABS ones are gold, two-piston non-ABS are black. Which is best? Some riders hate the C-ABS system and will always opt for the non-ABS bike. If you want the extra safety net (and it seems that most do as very few bikes for sale are non-ABS) be wary of seized pistons as the three-piston caliper seems less robust than the two-piston one. The ‘Deluxe Touring’ version comes with ABS as standard as well as detachable panniers. 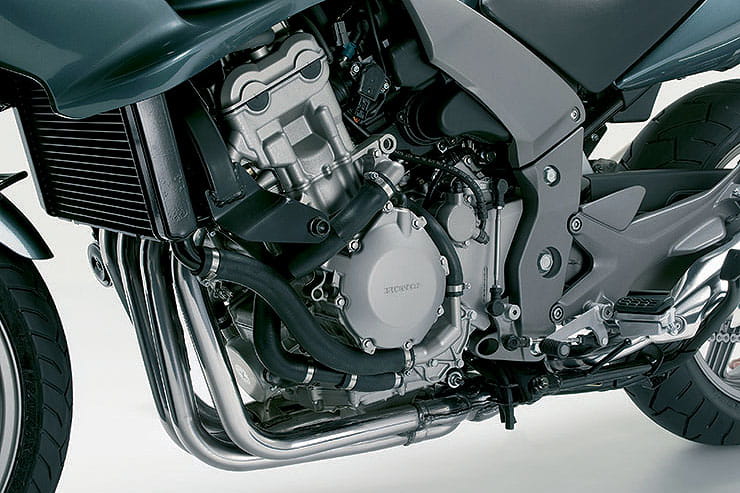 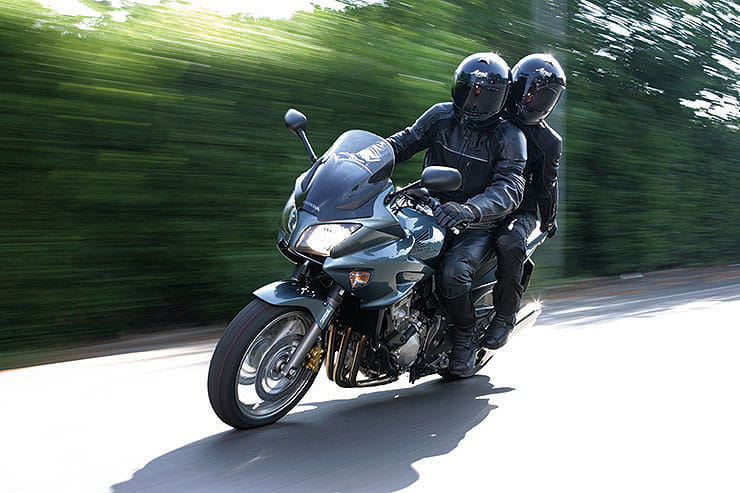 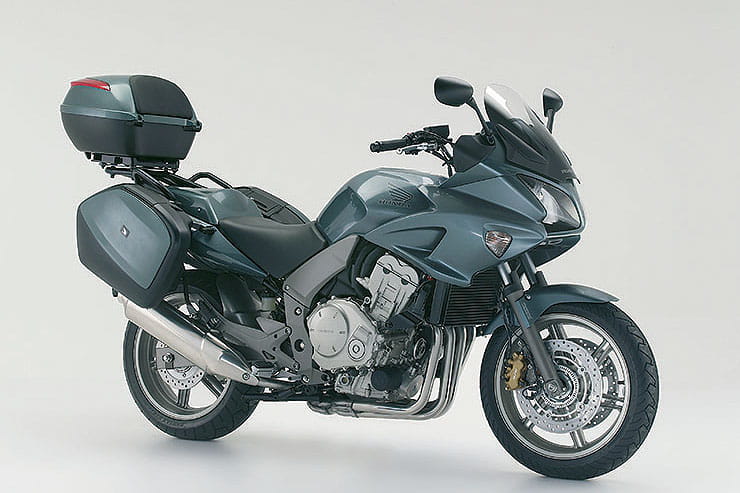 Absolutely you can take a CBF1000 touring and many riders do. The seat is extremely comfortable and although the OE screen is a touch short, this is easily resolved through an order to one of the many aftermarket screen companies. Comfort, a big tank range, reliability – the CBF1000 makes for a great tourer. Not only that, the seat is actually three-way adjustable in its height, so you can tailor it for your size.

In terms of rider assists, aside from the option of ABS you get an immobilisor and that’s it. However when it comes to accessories there are literally thousands of options with riders often buying taller screens, comfort seats, heated grips, luggage and grab rails. Watch out for poorly fitted aftermarket electrical items as they can overwhelm the generator or even allow electrical gremlins to enter the wiring loom. Ideally, aim for a bike with colour-matched paniers, a taller screen and heated grips and you won’t want for much more.

The CBF1000 isn’t a poster bike, it won’t send you wild with lust and it also won’t be one that will turn your mates green with envy. However what it does provide is solid and reliable two-wheeled transport that is hard to fault, making it the ideal second bike. Buy a CBF1000 for the days when you need to get from A to B and it is cold and wet and save your sportsbike for the sunny runs when you are only out to have fun.

Three things we love about the CBF1000… 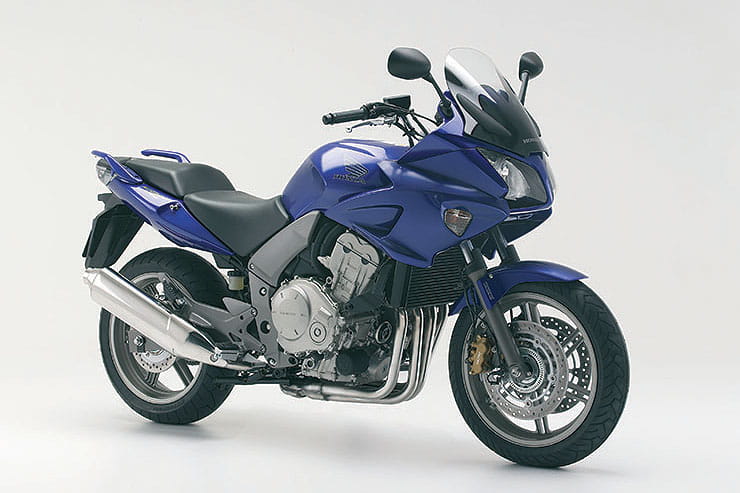 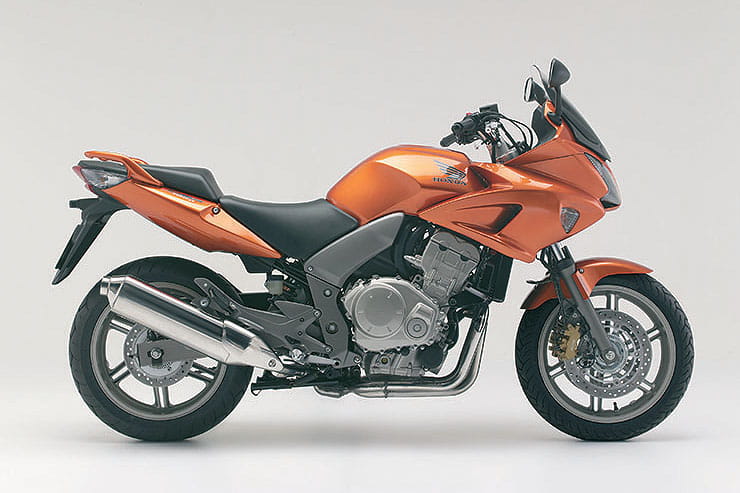 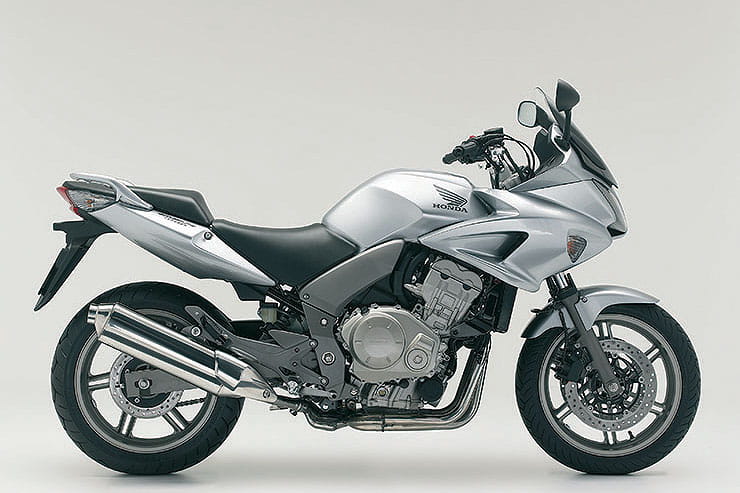 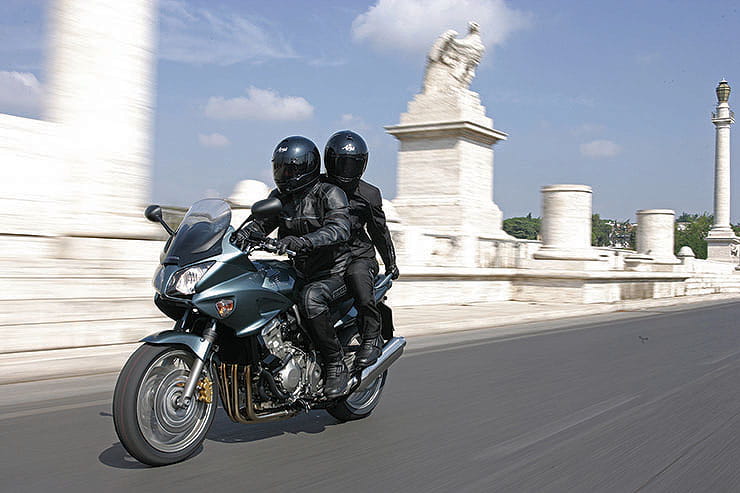