It’s been a month since I ditched the car for my daily commute in favour of two wheels and I haven’t looked back since.

I can leave for work later and still be on time, I can navigate around most of the horrible congestion that builds up on the A1 and arrive at work generally happier as I’ve not been stuck in a load of traffic.

And it’s all thanks to Honda’s CB500X, which makes a welcome addition to Bike Social’s summer test fleet. Here’s our verdict after 1,600 miles: 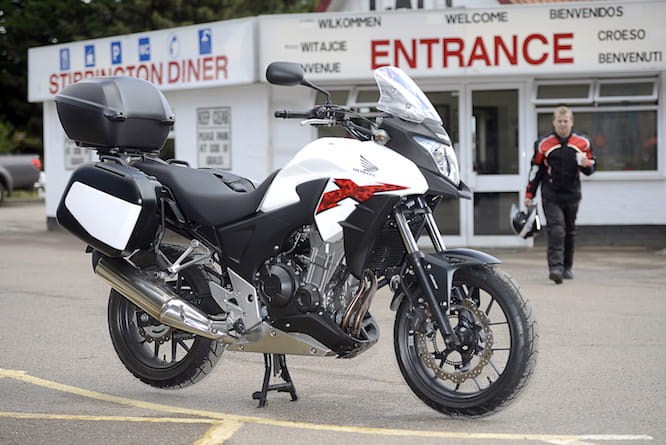 First introduced in 2013, the CB500X features the same basic engine, chassis and cycle parts as the Japanese firm’s CBR500R and CB500F machines.

All are powered by Honda’s 471cc twin cylinder motor, producing 46.6bhp making all three A2-licence compliant and that’s where the CB500X comes into its own.

While there are many sports and naked bikes aimed at new riders there’s almost nothing for newbies in an adventure style, which is quite surprising given the surge of adventure bikes in the last few years.

In fact, only BMW offer a ready-to-go A2 compliant, adventure-styled package to rival the CB500X with their single cylinder G 650 GS.

One of the first things I noticed about the X was its size. While the seat height is on the low side for an adventure-styled bike (which is most certainly a good thing when you’re only 5’8 like me) it actually feels quite big.

As a relatively new rider, I found this quite confidence boosting as I got used to riding a ‘bigger’ bike than the 125 and 300cc machines I’d ridden before. 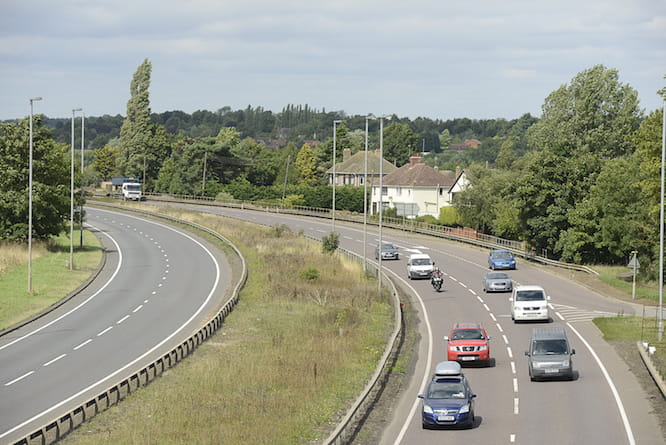 The X’s upright riding position and cushioned-seat makes for a comfortable commute, even when riding 120 miles on the A1 every day and while 46.6bhp isn’t bags of power, it’ll still sit comfortably at motorway speeds.

Wind protection is slightly lacking, even with the adjustable screen on its highest setting, but it’s still better than none at all. A higher screen and knuckle guards are available as optional extras to improve this– a must-buy if you’re planning to frequently make longer journeys.

With a top speed of around 110mph, the X isn’t slow and as long as you’ve got it in the right gear it’s always got plenty of pull.

The Nissin brakes fill you with confidence as there’s tonnes of feel and plenty of bite plus Honda’s ABS system comes as standard so you there’s that reassurance in the back of your mind too. On the couple of occasions I’ve tested out the ABS, it’s almost been unnoticeable as the bike comes to a rapid stop.

Away from the boring commute the CB500X brings a whole heap of enjoyment on the twisty roads. The bike feels planted into every bend with the Pirelli Scorpion tyres glued to the road and despite the lack of power it’s got plenty of drive on the way out. As a result of which, my confidence in cornering has increased massively during my time with this bike. 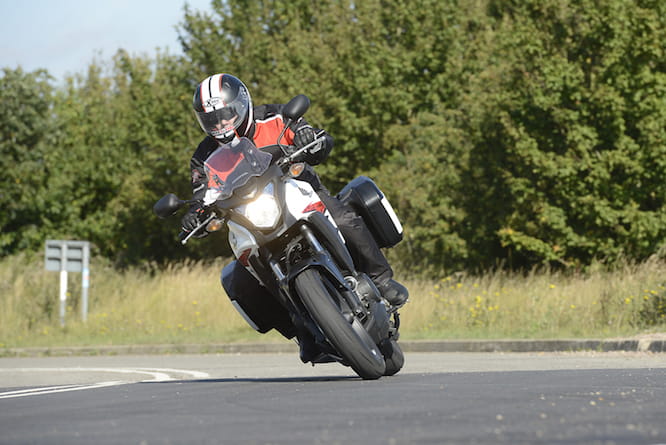 The fuel economy is great however you ride. After a week of commuting, the average MPG reader on the easy to read LCD dash shows 70MPG and even if you’re thrashing it, it’ll rarely drop below 50. I had to travel to Cambridge for two days the other week, a 200-mile round trip each day, and it cost me just £26 in fuel.

At less than £5,500, the CB500X is affordable too and despite the lower price, Honda haven’t cut corners. Sure, there are no bells and whistles (with the exception of ABS) as standard but the accessories catalogue has all you could need, including the higher screen, heated grips and crash protection.

The bike we’ve got has Honda’s travel package, including top box and panniers which have proved invaluable over the last month. The top box is big enough to fit a full-face helmet and while the panniers are a little on the small size, you can still fit enough in for a good few days away. 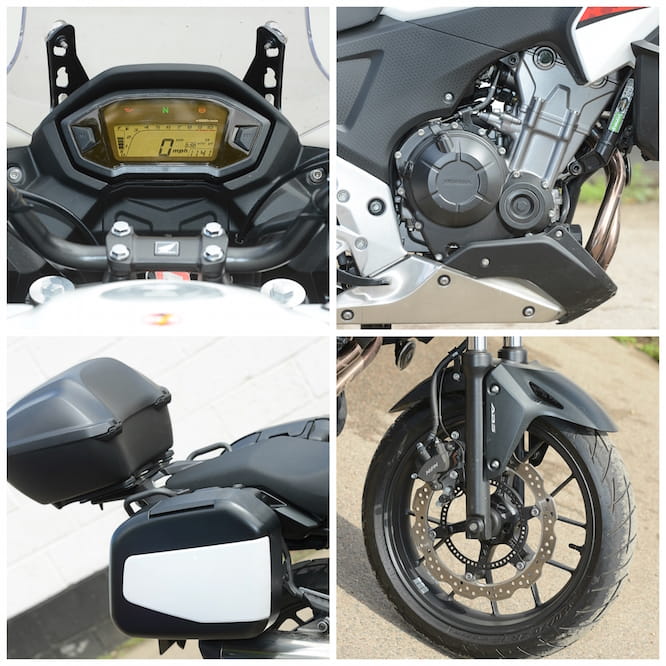 If you’re looking for a bike capable of a hefty commute while still offering plenty of fun at the weekend the CB500X could be for you. It is slightly geared towards newer riders (of all ages) but without the size disadvantage of a lot of smaller capacity machines, it could also fit the bill for an experienced rider looking for an affordable workhorse.

While it isn’t slow, it’s certainly not intimidating either but if you’re looking for power it might be worth considering the larger NC750X or VFR800X Crossrunner. If you’re not looking for a high level of performance, this affordable, stylish and versatile bike is well worth a look.