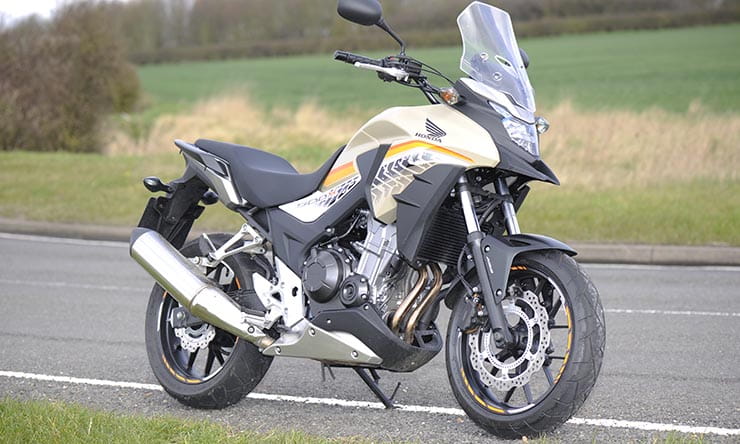 Honda’s CB500X adventure bike doesn’t have an ambient temperature readout. Right now, that’s a good thing. Ten miles in to a 55 mile commute through fog, ice and that brown, salty slush coating our roads from December to March, my fingers are suggesting somewhere around minus-two. I’m not looking for sympathy, but if you want glamour, I’d suggest going back to bed and popping back in the summer.

The idea was simple. Rather than moan about zero grip and puny lean angles, let’s get out there and use winter to test the stuff we can’t do in summer. Like headlights… and traction control… and weather protection. The real world stuff that all-too easily gets forgotten in summer or is simply just hard to test on warm, dry, clean tarmac.

Honda’s CB500X is proving to be a great winter benchmark. On paper, it’s a simple bike with an ‘ok’ spec; 47bhp, 196kg and a claimed 250 mile tank range for just £5599, with ABS and up-to-the-minute styling. On the road, it lives up to the promise if not the dreamy aspiration of razzing around on a million horsepower superbike. The CB is like a healthy portion of pie and mash as opposed to the Michelin starred ‘pulled quail beaks in pauper’s tears’ mega-motos we all dream about. And sometimes, especially in winter, a plate of pie and mash is just what you need.

The ‘X’ is the adventure version of Honda’s three CB500 models. It’s tempting to say it’s adventure-flavoured in the same way as some biscuits have a ‘chocolate-flavoured-coating’. Actually, that’s unfair. The CB500 is every bit as much of an adventure bike as BMW’s GS (which, let’s not forget, has almost always been just the taller, beakier version of their flat twin platform), it’s just that no A-list celebs have ridden one around the world yet.

And besides, let’s define the word ‘adventure’. In the last 34 minutes me and the CB-X have navigated the frozen wastelands of Lincolnshire, made at least four ill-advised overtakes that carried far more risk to life-and-limb than any dodgy Columbian border crossing. We’ve encountered black ice, white ice, slurry, an Audi A3 coming straight at us on the our side of the road because he misjudged an overtake, and almost ran into the back of a tractor doing 40mph less than the speed limit, in the fog, with no rear lighting whatsoever. How much more adventure do you want on your way to work? 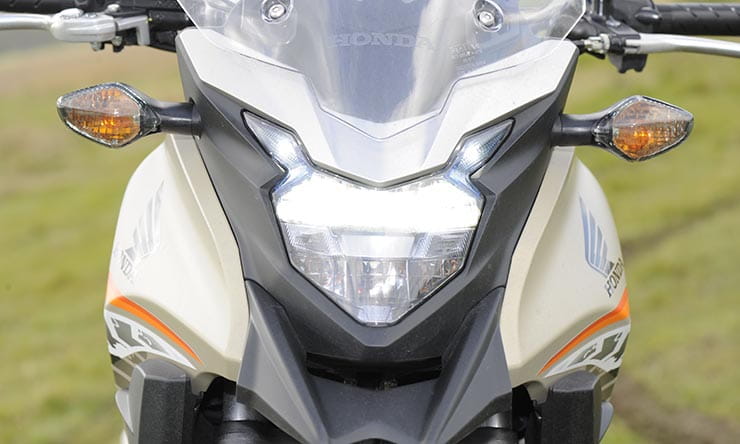 The ease with which the CB500 dealt with all of this is one of the reasons why they sell so well. That 496cc twin cylinder engine might spend most of its time doing that lovely linear-power-delivery thing that Honda’s do so well. But when you need a bit of extra acceleration to sort out a mistimed overtake, it’s there, hiding at the top of the rev counter.

Likewise, a glance at the spec sheet shows a chassis that’s neither long or short with steering geometry neither radical or conservative. But… the CB turns easily, with confidence and is predictably stable under heavy braking, on frosty roads when an ancient John Deere appears out of nowhere.

There are no gimmicks; no variable valve timing, multiple riding modes, anti-wheelie settings or traction control. The ABS needs a proper emergency to provoke it, which is how it should be and although a single front brake disc might leave the racers lacking, on the road, you just use a bit more rear brake to manage your speed. Well-chosen suspension settings mean the weight transfer under braking is smooth and progressive so the rear ABS doesn’t come in too early because the wheel’s off the ground. 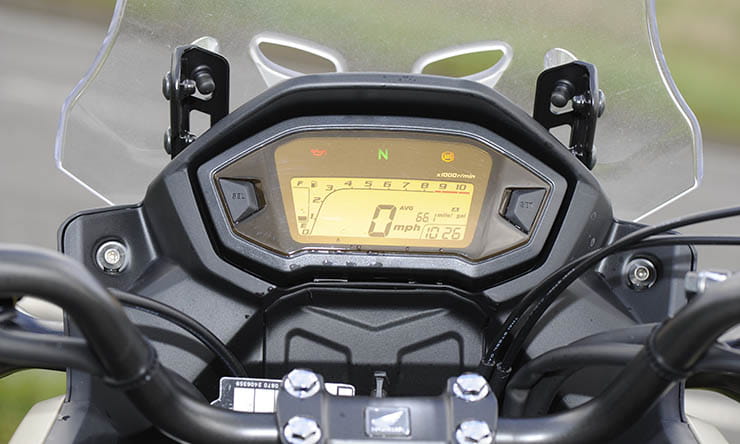 Because of the weather, I’d expected to spend most of the test period cruising around, with everything clenched, being as gentle with the controls as I could, but, in reality, on a bike with such an easy chassis and power delivery I found myself being much more aggressive and having a lot more fun than anyone on two wheels has any right to in late January. It’s not about cornering and lean angle, more to do with traffic-busting and getting to work 35 minutes earlier than in the car, while doing 20mpg more.  Talking of which, the stats are as follows; average time taken during a week on test to do the 55 mile trip was 64 minutes, giving an average speed of  51mph at an average of 64mpg.. Most of the journey (about 40 miles) is in 50mph+ speed limits, overtaking a never-ending queue of cars stuck behind a truck doing 41mph. In a car it takes between 85-100 minutes. Buying a CB500X means an extra hour each day to hug your wife and kids, watch Netflix or practice the drums. That’s five hours a week, 20 hours a month, 250 hours a year. It’s like having ten extra days holiday a year for having more fun getting to work. £5599? That’s a bargain.

Niggles? There are a handful of things that would make the CB-X a little better in these conditions. The headlight is ok on dip beam, but not brilliant. Main beam is good for 60-70mph on unlit roads, which is more than adequate for this kind of bike. The small screen and fairing are surprisingly good at keeping the cold winds off , but the screen is noisy above 30mph and there’s no protection for your hands; my fingers were so cold on arrival most days that I had to sit in the office for ten minutes like a bad ‘Stig’ impersonator, 'til they got warm enough to unfasten my helmet. Heated grips and handguards would make a huge difference.

But that would also bump up the price and that’s one of the CB’s biggest selling points.  £5599 is amazing value for a bike built this well, offering such good all-round performance and a big dollop of mischievous fun as well. It’s easy to pigeonhole the CBs as bikes for new riders, but I’d argue that they offer a lot more than that.