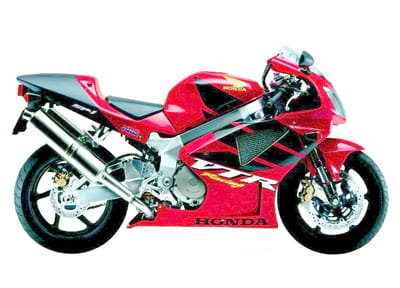 Honda’s answer to Ducati’s V-twin domination of the World SuperBike Championship was simple: build a V-twin to beat a V-twin. Honda’s racing arm HRC did exactly that and the resulting bike was the RC51, more commonly known in Europe as SP1.

There’s no getting away from it, the SP1 oozes quality. It’s small, compact and perfectly formed with the usual Honda build quality. But while it dominated the WSBK championship, the homologated SP1 street version isn’t the usual finished product expected from Honda.

The main issue comes with the throttle delivery. It can be hesitant at low rpm, almost on/off in action depending on what gear and how many revs are dialled in. It’s hardly noticeable when used in anger but it can be a pain riding at a sedate pace. The two 54mm throttle bodies are also keen to push fuel down into the heads when the wick is turned up. Expect to see no better than 26mpg on a fun-filled track day.

The suspension is also ridiculously harsh. No matter what way you turn the all adjustable settings, the ride is choppier than the English Channel mid-storm. A stone the size of a pea can be felt through the bars or seat, so yes, feedback is great but you don’t need a bike to clatter, bang and punch its way across back roads. It’s not so hot at sticking to a perfect line. Understeer, we have been reliably informed can be tweaked out with the addition of a rear shock spacer.

Place the issues above in the back of your mind and the SP1 is sill more than capable of delivering a thrilling ride – either that or go buy the revised 2002 SP2. Pegs are high and set back and the seat is shaped for instant knee-down cornering. With head ducked down behind the screen you are Colin Edwards on the way to a WSBK race win. While the power output is marginal compared to some big in-line four-cylinder bikes, there’s plenty of torque and horsepower to be applied usefully thanks the waif-like chassis dimensions.

The best place for SP1 to run mad is at a circuit, where many SP1 can be seen playing hard at track days, obviously with re-valved forks and a replacement rear shock. But if you want to set hearts beating then simply pulling into a bike meet on an SP1 will turn admiring heads – even today.

+ points – has the enviable kudos of being a RC designated Honda – this puts it in the same realm as greats such as RC30 and RC45.

- points – unforgiving suspension (Honda got it wrong). Throttle delivery can be hit and miss.