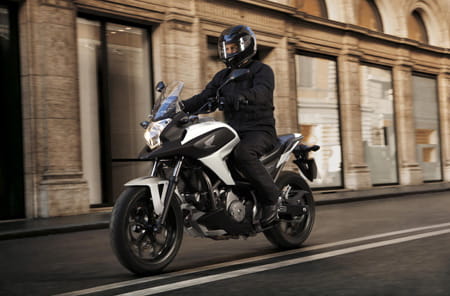 Given that Honda says it builds bikes that anyone can ride, then it made sense for Honda to build a bike that everyone should ride! Honda’s NC700X is that bike and these are the reasons why.

The engine is a new design built for modular use – it is made to be used in at least three genres of motorcycling: the Integra scooter, NC700S naked roadster and the NC700X, which Honda class as an adventure bike. Who said Honda hasn’t got a sense of humour?

The NC700X engine is basically half a Honda Jazz car engine, or thereabouts – the automotive division did have a hand in the design – and is built for low rpm torque and fuel economy. Economy is brilliant with a recorded average of 66.3mpg but still some way short of Honda’s claimed 75-80mpg. Honda does its test on a dynamometer and not in the real world of up and down dale with traffic and traffic lights. Still impressive, though, to achieve around 190 miles on just 14.1 litres carried in the underseat fuel tank.

This economy comes from a long-stroke engine that feels like it produces all drive sub 5000rpm. It takes some getting used to if already bike experienced because where you would normally entice the engine to dish out power at the mid to upper end of a normal rev scale, there is no more power or torque after a claimed 6250rpm, so it’s necessary to shift early in short-shift-style through the gearbox, otherwise you bang into the low set rev limiter at 6500rpm.

To be fair, the engine covers the short amount of revs quickly and cleanly and is happy and vibe-free at the legal limit of 70mph. The six-speed box is well thought out to give instant drive and possibly 115mph top speed – given enough time and road.

The underseat fuel tank aids the low centre of gravity and makes the NC700X light and balanced to make it agile on back roads and gridlocked city roads. It also allowed Honda to build in a lockable compartment where the fuel tank is normally situated. This cubby hole is big enough to fit one crash helmet – mine was a Shoei, but a friend’s one-shell-size-fits-all European-made helmet wouldn’t fit.

As it comes, the NC700X is an easy bike to ride. It gives the impression of riding a big sit up and beg bicycle with little effort required through the bars to steer and the view ahead is clear. It certainly isn’t blocked with fairing screen, but there’s a small screen deflector that performs admirably at lifting the worst of oncoming air away from the body.

ABS is standard fitment and surprisingly cuts in more than expected, due mainly to the fact the front forks are softly damped and dive rather than damp when the front brake is worked hard. Edging in a bigger percentage of rear brake makes a lot of sense because the combined ABS helps keep the Honda set at a vertical level rather than acting like a feeding duck.

Competent and useful, the NC700X will make a good commuting tool and an easy upgrade for fresh A2 licence holders. If only Honda could apply similar fuel frugality on some of its other bikes, the bike-buying world would be a happier, booming place…probably!