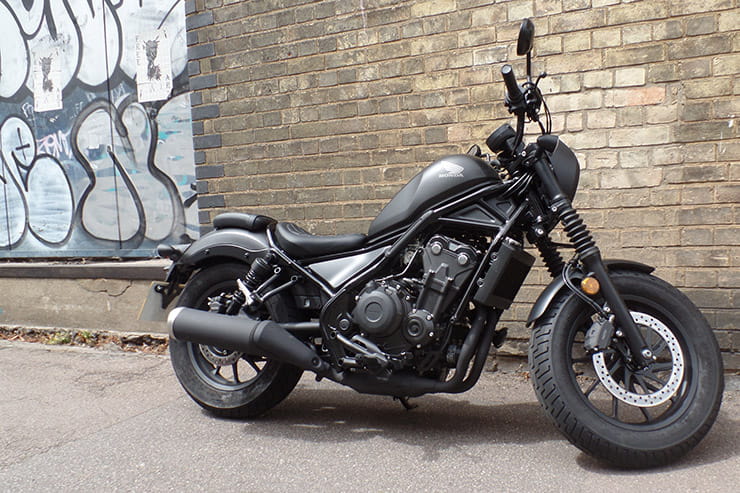 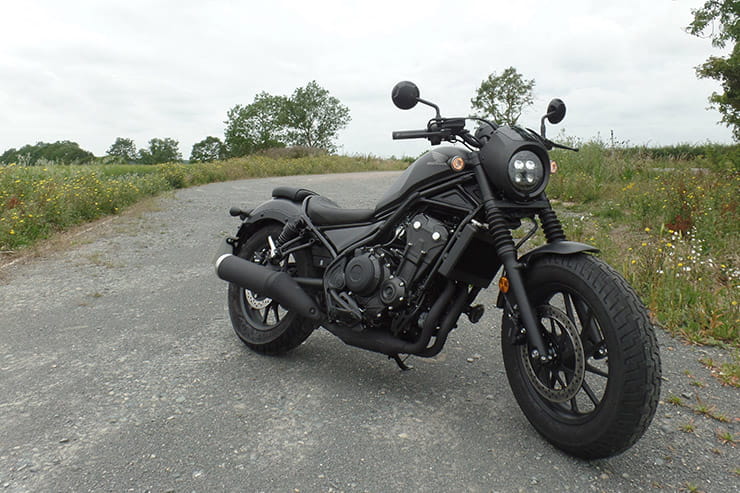 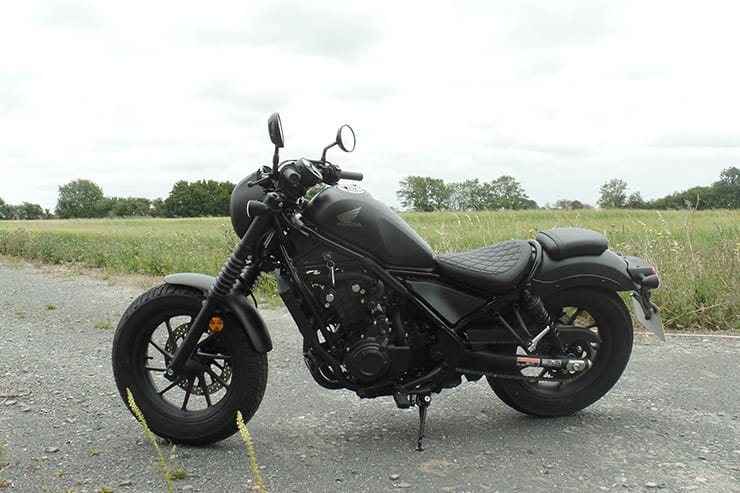 When the original Honda Rebel hit the streets back in 1985, it was a 250cc mini-Harley-lookalike cruiser, finished in chrome, and aimed squarely at the US market. It was briefly joined in 1986-87 by a 450cc version as Honda tried to muscle in to a younger customer base. A combination of low seat height and easy-to-ride handling made it the perfect first big bike for those looking for Harley-Davidson looks on a lower budget.

After an astonishing production run of almost thirty years, the Rebel was revised in 2016 but this time in 500cc form as part of Honda's 'one-engine-many-guises' range of bikes including the roadster CB500F, sports-lite CBR500R and the off-road orientated CB500X. Times had changed, fashions had moved on and, with the demise of the traditional cruiser market, the Rebel was reborn as a mean and moody bobber.

With a light dusting of updates for 2020, we spent some time with Honda's A2 compliant mini-cruiser and to see if that moody exterior hides a heart of gold. 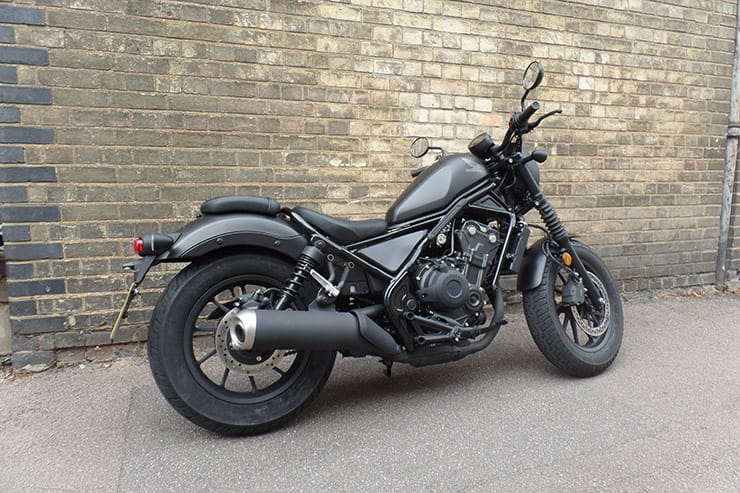 The base model 2020 Rebel comes in at £5,799 which is the same price as the outgoing 2019 model, but the use of the phrase 'Base Model' gives the game away for one of the key updates for 2020 – the addition of a Special Edition.

The Rebel S, as tested here, comes with a colour-coded headlight surround with integral 'screen', traditional fork gaiters and a trendy cross-stitched leather look seat. Only available in Matt Axis Grey, it comes in at £6199. At this price, the only real competitor for the A2-retro-vibe is the Royal Enfield Interceptor 650 at £5799-£6199, although you can get a restricted Kawasaki Vulcan for £6299.

A quick look at the used market shows good, low mileage, dealer warranted, two-year-old bikes for around the £4000 - £4500 mark showing that cost of ownership is relatively low, depreciating at around £750 per year. 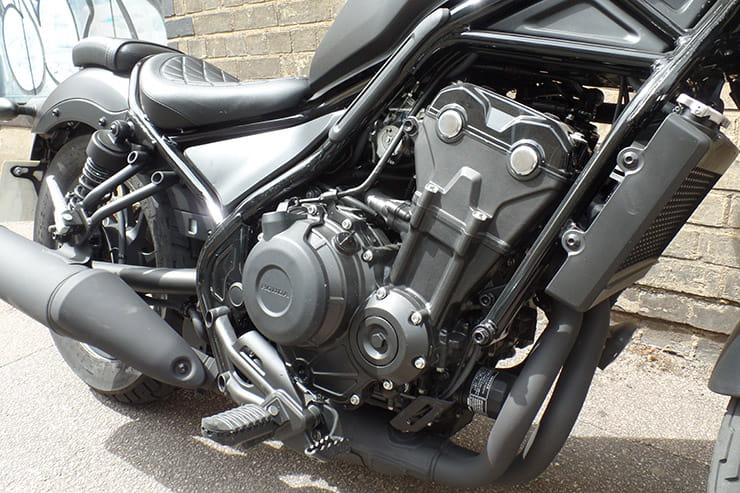 If you are expecting me to say here that the 45bhp that the Rebel makes is the right amount for beginners, then prepare to be disappointed. In my mind, it’s the right amount for most riders and most journeys. Saying that this bike needs more power, is like saying that the latest Fireblade is a rubbish sportsbike because it needs more luggage. Get in the right frame of mind for the Rebel and you soon realise that power and speed come second place to attitude, rideability and style, and the Rebel has these in bucketloads. 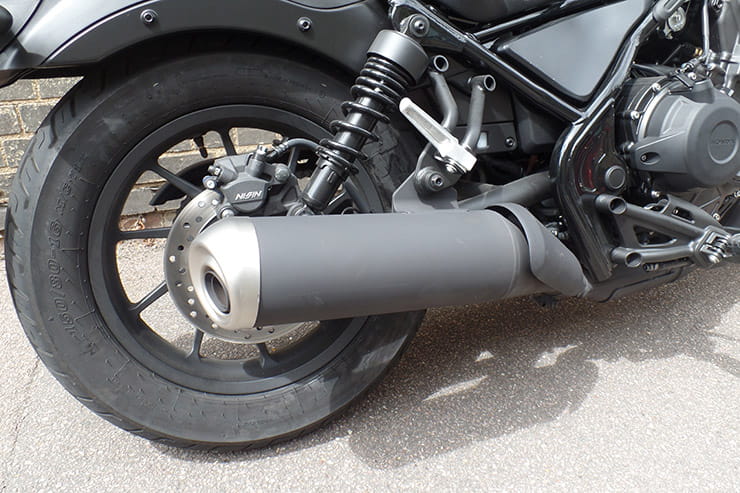 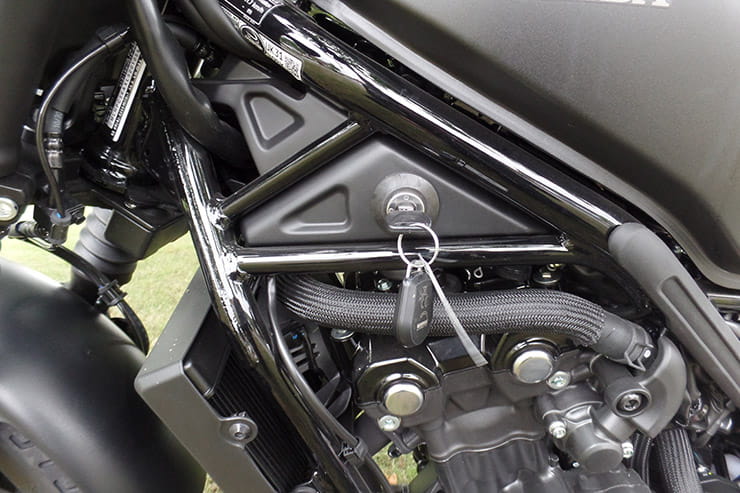 Shotgun exhaust? Check! Headstock mounted ignition barrel? Check! Steering lock is on the other side though, making locking the bike a bit of a faff.

The key to the Rebels power is the use of the now massively popular and reliable 471cc parallel twin used in the CB500F Roadster, CBR500R sportster and CB500X adventurer.

The super free-revving engine is smooth all the way up the rev range though with no rev counter it's better to use your feel for the bike and change gear when the torque begins to drop. Get this right and its easy to make very swift progress.

Physically, the engine fits nicely into the slim profile of the frame, though the large clutch housing on the right side does protrude into your leg area, not helped by a large protective cover which is fitted as standard on all models.

The gearbox is extremely light and, as you would expect from Honda, an absolute pleasure to use. Coupled with the slipper-assist clutch, you truly only need one finger on the clutch to change gear and clutchless changes are child's play.

My only criticism with the engine is that in a perverse way, the engine is too smooth for the Rebel. On a low-slung bobber/cruiser, you expect engine vibration, deep rumbles from the exhaust and pops and bangs on the overrun, but alas, it's all lacking on the Honda, which is a bit too clinical in its performance. If rumours of an 1100cc version using the new mill from the Aftrica-Twin are true, then that may well be the engine that the Rebel deserves. We wait with bated breath for that one!

Honda claim 73mpg from the Rebel which I can't help thinking is massively wishful thinking or not recorded in real road conditions.

Fuelly.com shows 12 Rebel users averaging 63.5 which is very close to my own experience, achieving dead on 64 over 270 miles of varied use including A-roads, twisty B-roads, some motorway and some city-centre commuting style riding.

Even based on these lower figures though, range from the 11.2 litre tank would be around 113 miles which is probably more than enough for the weekly commute, a weekend cruise or as much as your bum could manage between fuel stops (see comfort below) on longer journeys. 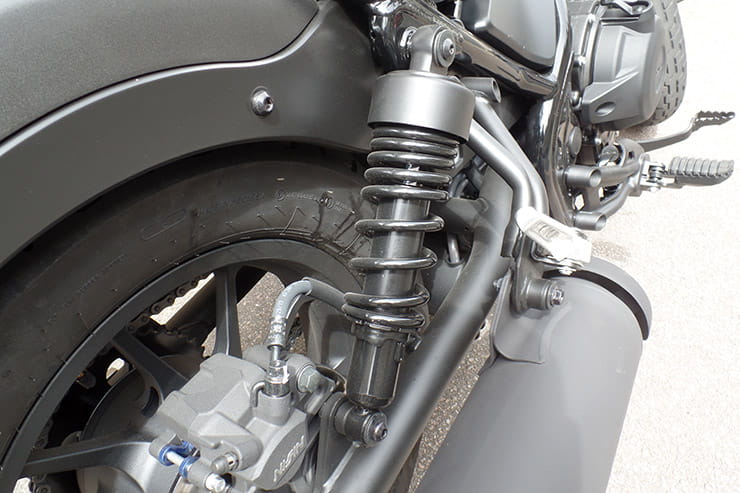 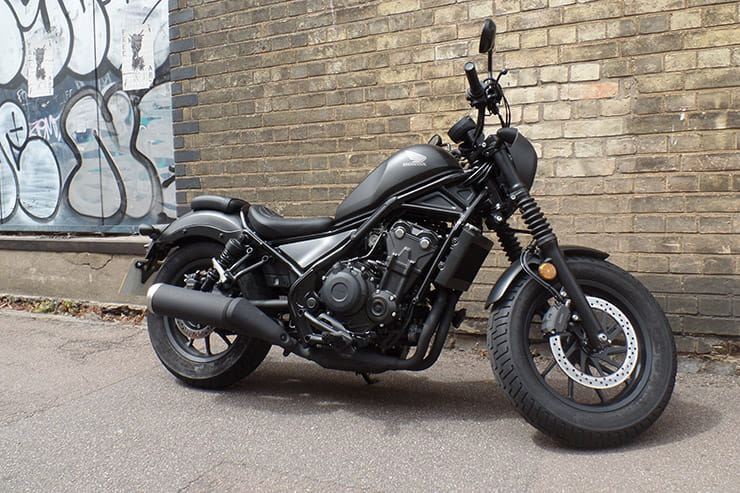 The 2020 bike keeps the tried and trusted layout of the 2019 bike, with 41mm forks up front (with no adjustment) and twin shocks at the back - adjustable for pre-load only.

Honda make a big deal of the twin shocks being Nitrogen filled, presumably giving a more predictable and consistent ride, as well as reducing heat and moisture build up. A favoured solution on  motorcross bikes (where shocks are taking repeated pummelling and can build heat quickly), I can't help thinking that this is aimed more at the Asia-Pacific markets where ambient temperatures and humidity are far higher than in European markets. On the road, I was hard pressed to feel any difference from regular shocks and the Rebel is still a tad too softly spring for my liking.

That’s not say that the Rebel handles badly - far from it. At 'normal' traffic speeds the Rebel is hugely confidence inspiring. On the move, the bike is very light to steer, despite those chunky tyres, and does a good job of smoothing the pot-holed road. Only when speeds pick up do things get a little squirrelly with the back of the bike wallowing through faster corners. The bike never feels unsafe, but a combination of very little weight over the bars, and that overly soft suspension makes for an 'interesting' ride which could feel a little off-putting for newly qualified A2 riders.

The low seat height though, combined with a low weight of just 190Kg, means that at stand still and when filtering or in slow moving traffic, even the most nervous rider will soon feel confident. Flat footing and paddling the bike around is an absolute doddle for all but the very shortest among us. 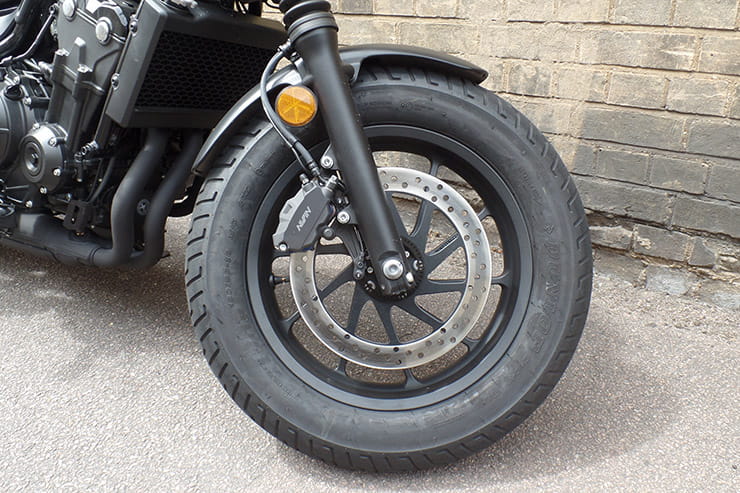 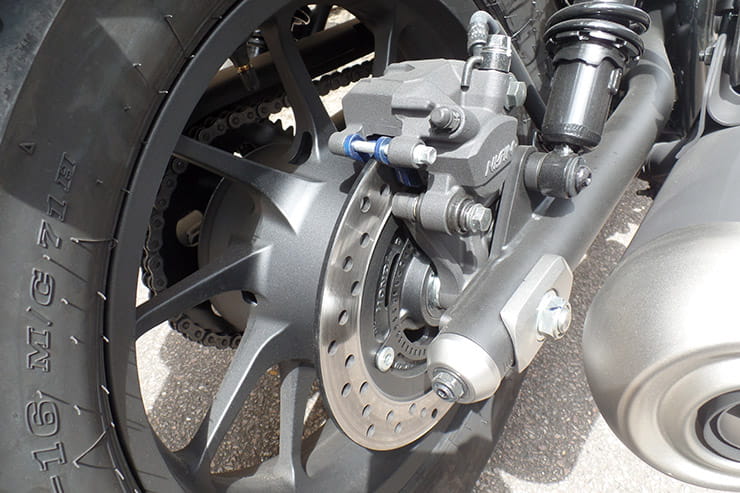 As you would expect for a Euro 5 compliant bike, front and rear ABS comes as standard. The rear ABS is a tad crude in its action, with a series of chirps coming from the rear tyre when braking hard, particularly on smooth road surfaces. It never feels like its going to lock completely and, once you get used to it, can be quite entertaining. The front brake takes some real force to lock up and, combined with a low centre-of-gravity, makes the bike stable on all but the most extreme of braking manoeuvres. While the single 240mm disc up front never feels like it's overwhelmed by the bike's weight, a combination of front and rear braking definitely helps when hard braking is needed. 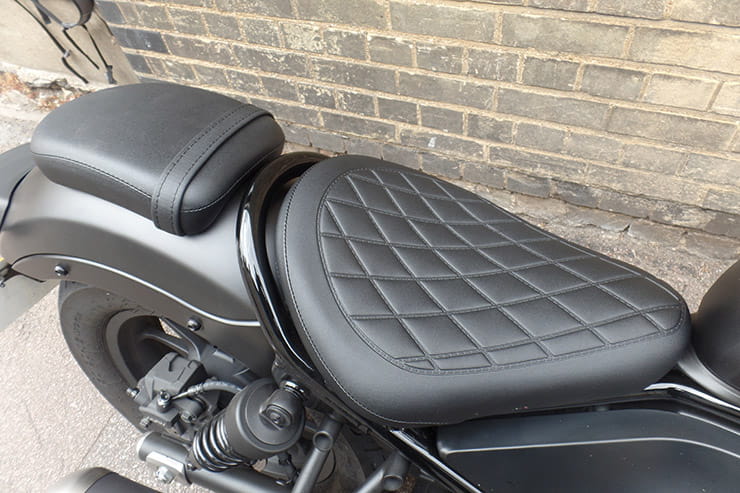 The low and forward bars do make for a slightly more streamlined body shape that some other naked bikes, meaning that motorway speeds are possible but soon become tiring on the neck. The addition of the clock cowl and mini-screen on the S Model are more of a styling exercise than there to help with aerodynamics, but they do help to deflect some of the wind blast for shorter riders. At 5'6" I could definitely feel the benefit, but if you are taller you might look towards the aftermarket range of screens for an easier ride.

The seat is all new for 2020, with thicker padding and the pillion seat coming as standard for the European market. The pillion seat is a bit of a token gesture though – it might get you and your mate/partner down to the pub, but I don't expect anyone to be undertaking grand tours, two-up on the Rebel.

The rider seat is plush and, at first, comfortable place to be but for me, 100 miles was the most I could endure in a single sitting. The combination of the low seat (just 690mm or 27.1 inches in old money) and mid-mounted pedals means that, even for shorter riders,  your knees are level with your hips making it difficult to take any weight through the pegs. This  results in all your weight going through your tailbone, making a numb bum the norm quite quickly. It’s a common issue on all the cruiser/bobber bikes I've ridden and no worse on the Honda, but worth considering if you are planning some long-distance tours. 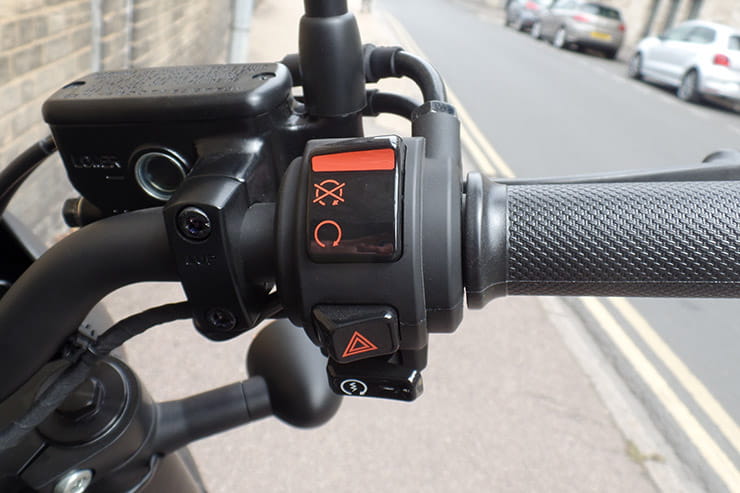 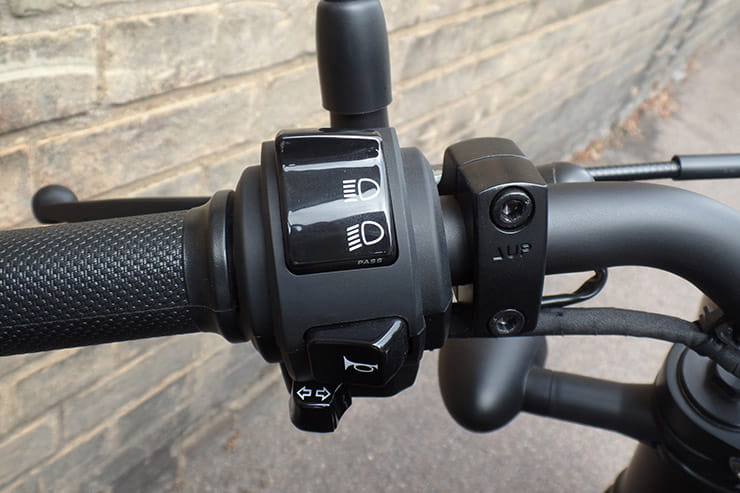 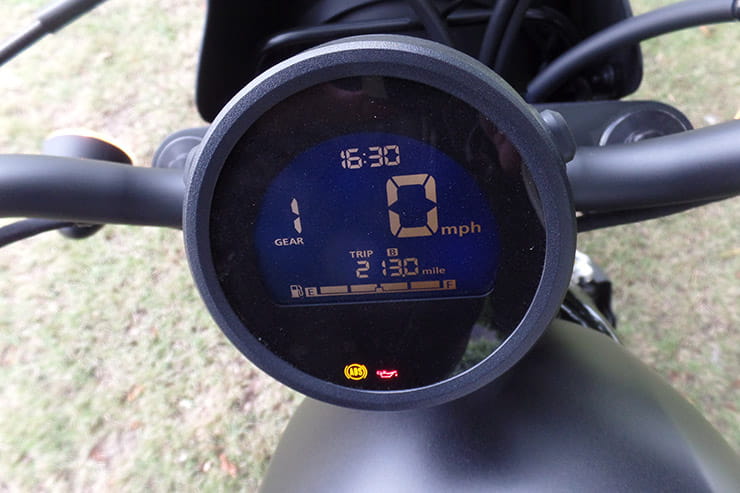 High quality switch gear as you would expect from Honda. Speedo acts like a mirror, but gear indicator is a welcome addition

In terms of rider aids, apart from ABS and the slip-assist clutch, we get nothing. That includes no Traction Control which, in the wet, may be an issue for some but as I would see the Rebel as more of a Sunday treat bike than a day-to-day commuter, shouldn't pose an issue for the majority of rides and riders.

New for 2020, and to bring the bike more in line with the rivals, we get LED lights all round, which in the case of the indicators and rear light is a good thing, but the headlight is a certainly 'marmite' change – love it or hate it, there is no middle ground here! Personally, I don’t think it suits the style of the bike and stands out like a sore thumb. LED headlights can look good on retro bikes, as the Kawasaki W800 demonstrates, but on the Rebel it just doesn’t work. Sorry Honda!

The instrument binnacle is also revised for 2020, but only to add a gear indicator. There's still no rev counter, which at first seems strange, but to be honest, after the first few miles, I didn’t really miss having one and never found myself banging the engine off the rev limiter. Once thing that I did find annoying though was that the angle of the speedo, combined with its moody grey-on-black colour scheme made it difficult to read in even modest sunshine – especially when wearing a white lid which reflected perfectly off the gloss screen.

While Honda pitch the Rebel as blank canvas for further customer customisation, the official accessory catalogue is a little lacking, with just luggage panniers and racks, a larger screen (not compatible with the Rebel S), a USB port (should this not come as standard?) and a Termignoni exhaust available. It would have been nice to see heated grips as a factory accessory for those choosing to undertake day-to-day commuting. 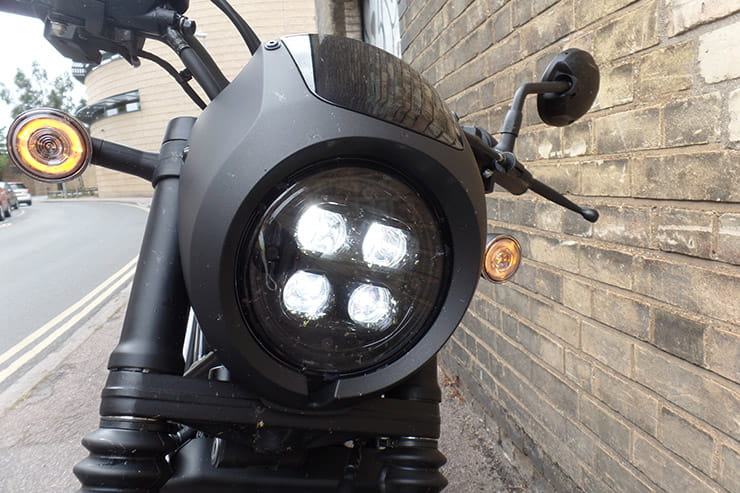 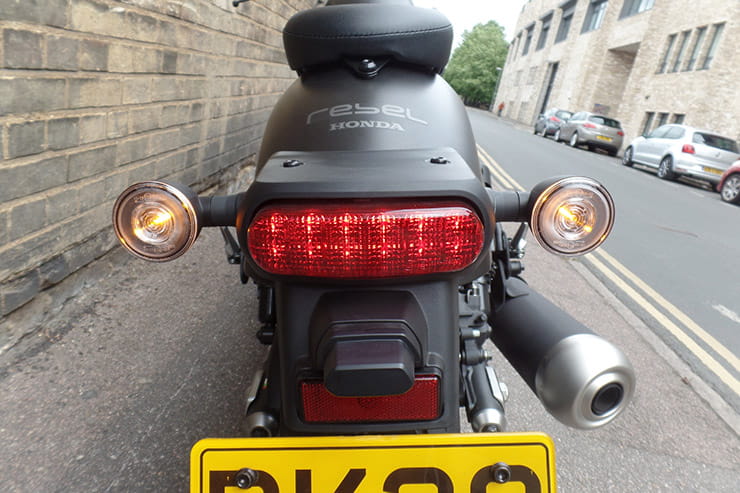 Overall, the 2020 Honda Rebel S provides minimal updates on what was already a great bike and a perfect entry point to the bobber scene. It remains as easy to ride and confidence inspiring as it has always been and remains a bike more suited to the city and urban environment than to fast B-roads and motorways (but you probably know that anyway). Even the pricier S model represents fantastic value for money and the Honda reliability coupled with superb build quality mean good residuals (so long as the bottom doesn’t fall out of the bobber market, as it has the cruiser market) and make the 2020 Honda Rebel a sound buy for new comers and more experienced riders alike. 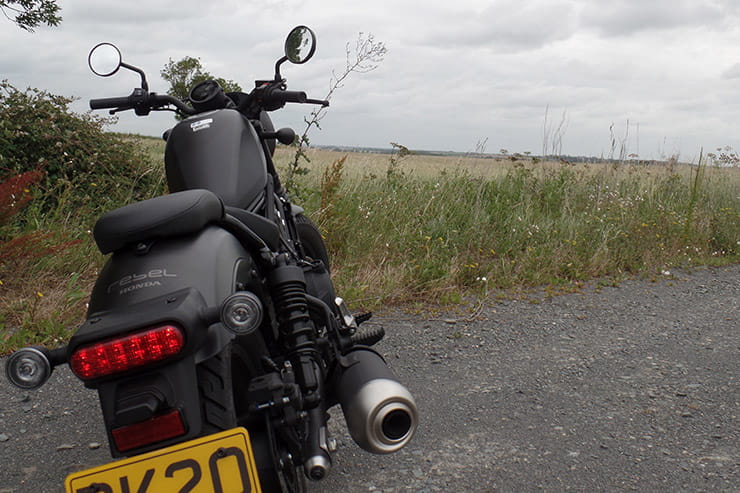 B-Roads - Not the usual hunting ground of the lesser spotted black bobber, but the Rebel is more than capable of some Sunday scratching