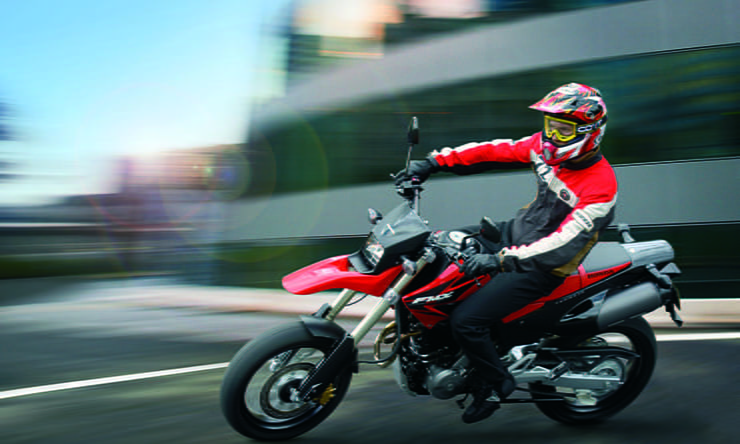 Fun means different things to different people and someone in Honda’s R&D department back in the early 2000s certainly had an odd idea of entertainment when they came up with the FMX650. Launched in 2005 and entitled the ‘Funmoto’, the FMX650 very rapidly fell out of favour due to the fact it was a bit of a slug and therefore not much fun – especially for a supermoto.

The FMX’s problems started at its very heart. Powered by a 644cc RFVC air-cooled single that was as old as the hills themselves, the FMX made just shy of 40bhp and was far more of a city slicker than a fire-breathing supermoto. But Honda failed to really grasp this fact and marketed the FMX with pictures of it on track and paint schemes called fighting red, rhinoceros grey and nobleman yellow. Rhinoceros grey, really? Sales, like the bike, were slow and by 2009 it was dead in the water.

Nowadays the FMX is slightly more of an appealing prospect. Lack of performance aside, the FMX isn’t actually a bad bike. Its look is a bit plain, but it ticks the necessary supermoto boxes such as 17-inch wire wheels, tall bars and a high mudguard. Add to this some nice practical touches such as an electric start, cheap maintenance, fold out bungee hooks and a surprisingly comfortable seat and it all adds up to a decent package. And one that is currently a very tempting price.

The FMX’s lack of popularity has seen prices drop through the floor and where popular supermotos such as the DR-Z400SM, Yamaha XT660X and any KTM model are usually found above the £3,000 bracket, an FMX can be snapped up for less than £2,000. As a no-frills city hack the FMX is more than up for the job, delivering over 50mpg and minimal running costs, making it a good option for those on a tight commuting budget.

The FMX’s motor is based around the old Dominator and XR650’s lump and as such will probably last well beyond the apocalypse. It is about as solid and under stressed as they come and your only real worries are if it sounds overly noisy. A nasty tappetty sound could hint at badly adjusted valve clearances and possible damage while rumbles could be a clue towards big end issues. Generally, if it starts from cold and ticks over nicely with no signs of oil burning or nasty noises you are safe. Owners report few mechanical issues aside from the carb needing a clean every now and then (especially if it has been left standing for a while) and the FMX is an easy, and therefore cheap, bike to work on. While panels can be tricky to locate secondhand, Honda still stock parts, and simple stuff like the bars and levers are easy to get. Owners say swapping the OE exhaust system (which is stainless steel) for a freer breathing aftermarket system, and changing the carb’s jetting to suit, makes a huge difference to the bike’s slightly lacklustre performance and quite a few also lower the gearing by changing the drive sprockets.

The FMX650 was a bit of a failure and as such wasn’t updated in its short five-year life span. What you see is what you get. 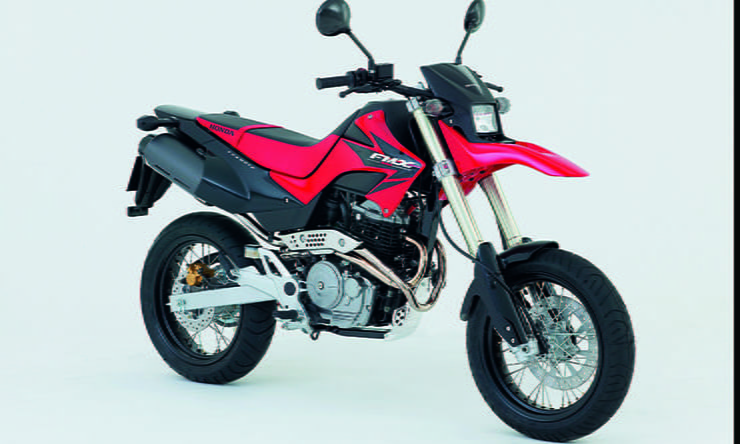 The FMX is the least popular of all the small capacity supermotos, which means prices are nice and low. Honda were convinced that they were onto a winning formula with the FMX and brought a considerable number into the UK, especially in 2005, which means they are fairly easy to locate despite their unpopularity and lack of sales back in the day. A good condition 2005 bike should have a price tag in the £2,500 bracket from a dealer, which will probably be negotiable and you should be able to get it for just over £2,000. Private bikes go for as little as £1,500. While a dealer may try and get near to £3,500 for a late-model FMX, realistically this is a touch optimistic and a value of closer to £3,000 is needed to secure a sale. If you have £3,000 to burn, you can get a beauty and probably still have a bit of change left in your pocket to give it performance-enhancing pipes.