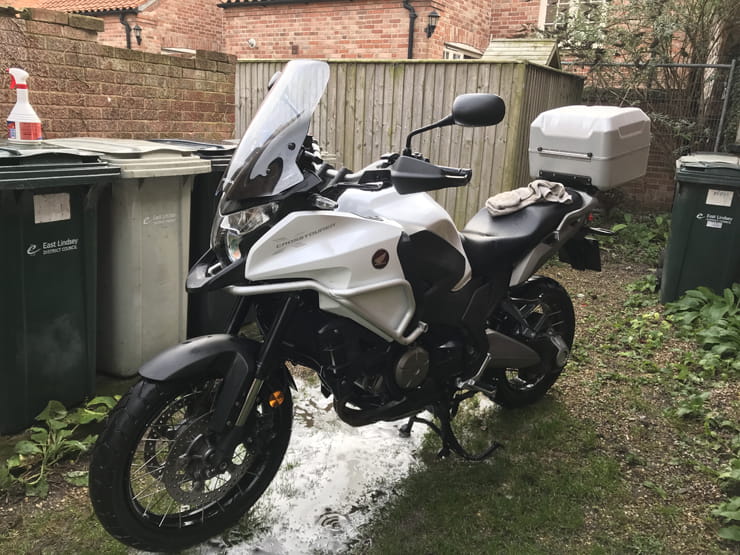 Composure. I don’t think I’ve ever chosen a bike based on this before. Not as sexy as having a million-and-one bhp, or 105 new components in the engine alone (begging the question, how could they have missed out those 105 bits on the old one?), but right now, the Crosstourer’s ability to glide, flick and steer a pinpoint accurate line through what appears to be the site of the ‘Gosberton Somme recreation’ society’s favourite location is astonishing.

The B1397 is wet. And brown. Covered in claggy, muddy clay. It’s a rural road so we can’t complain when tractors do rural stuff on it, and round here they are pretty good at cleaning up afterwards. My fault for using it as a short cut on a busy tractoring day, but it’s given a fascinating insight into the Honda’s hidden talents. 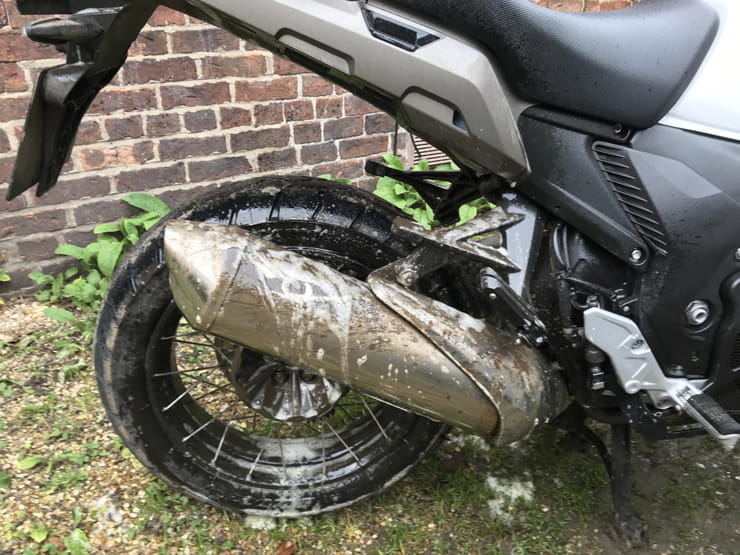 Half a mile in and the mud is relentless. The road is slopping, but the rain has stopped, there’s no other traffic and visibility is good enough to plot a line. The Crosstourer’s DCT gearbox is in ‘D’ – the laziest, most gentle setting and I’m gently rolling on and off the throttle, right in the middle of the VFR’s fat torque curve as we roll through a series of bends that are tight enough for knee-down in the summer, but open enough to see anything coming a long way off. Various parts of the creaking Rose anatomy are, er, feeling, …clenching…waiting for that first, teeny slip or slide, but it doesn’t come. Bridgestone’s Battle Wing tyres are doing a better job than I could have hoped for. I can feel the suspension working – smoothly, gliding up and down, controlled damping in that silky way that only Hondas do. I glance down at the speedo.  And then do a double take. Really? That quick? It felt like about half that speed. We established a long time ago that the Crosstourer’s adventuring ability is mostly skin-deep, but that doesn’t mean it can’t surprise you when the going gets tough. Composure. It might just be the future.

Sadly, the downside of all this is that when I get home, the bike is plastered in baked-on crud. It’s going to need a proper clean. 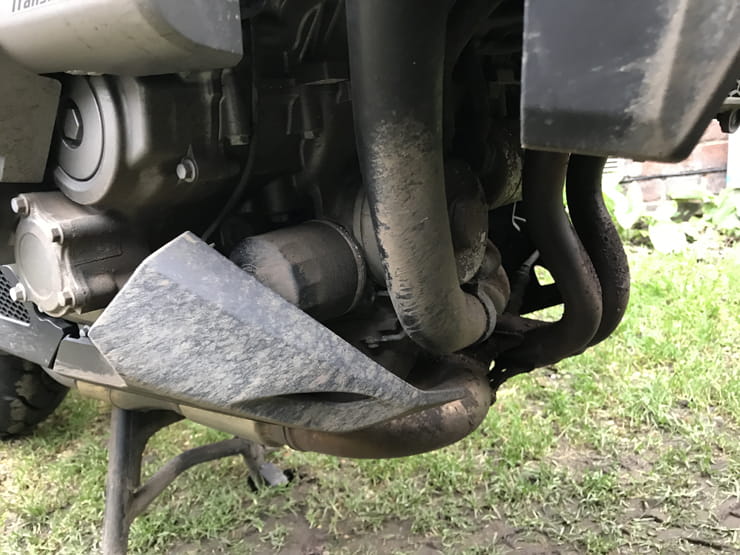 This could be the time to break the glass and finally use the bottle of vintage Sdoc 100 I’ve been keeping in the cupboard since 2008. Someone bought me an Sdoc gift set ten years ago (we know how to do valentines properly up North), but once I saw the price of the bike wash (about £16 a bottle) I could never bring myself to use it. Truth is my bikes rarely get that dirty that a bucket full of water and Fairy liquid won’t do the job. If I was going to use £16 worth of cleaner it had better be worth it.

And now, finally, something that is. Application of the Sdoc 100 is simple. Squeeze the trigger and coat everything with the bike wash. It took a whole bottle to do the Crosstourer. Leave it to soak for a few minutes and then hose it off. That simple. No brushing, no scrubbing, just squirt and hose.

The results are impressive. All that baked-on crud just washes down the drain. Wow…and it bloody well should be for £16 a wash. My local hand car wash (which presumably uses similar chemistry in a bigger bottle that they buy in bulk) charges £6 to do a bike and the results are every bit as good as this. 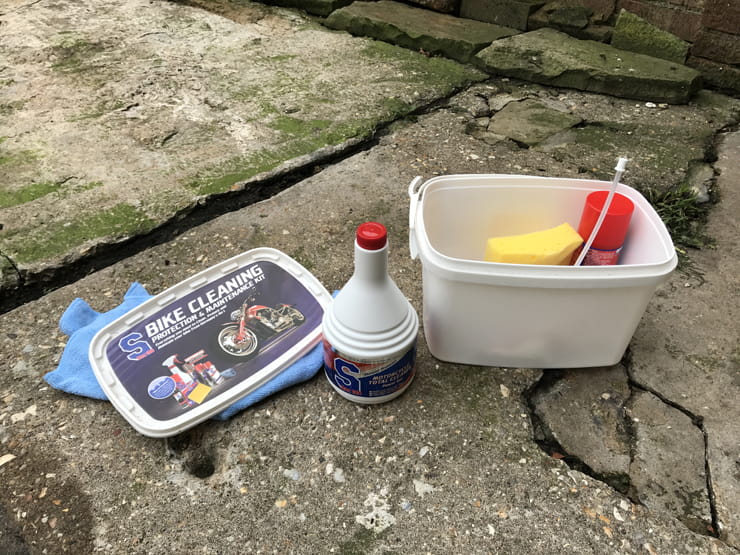 After 5000, mostly-winter miles, the BikeSocial Crosstourer is standing up to winter brilliantly. Maybe the brakes are feeling a bit stiff – like the pistons might be sticking – but otherwise, it comes up like new.

I’ve also been running a fuel consumption test in the various gearbox modes (sorry, used to be a scientist, can’t help it). Common sense suggests that ‘D’ mode, where it changes up early and hangs onto high gears for longer, would be the most economical and ‘S’ mode where it does the opposite would use more fuel. I tried both and ran it in manual mode too, changing up and down when I wanted to, not the bike. The results were as follows. Over the same 110 mile test route it used 11.5 litres in ‘D’, 10.7 litres in manual and 10.4 litres in ‘S’ mode, which is equivalent to 43.4mpg, 46.7mpg and 48mpg respectively. This is on mostly A-roads, averaging around 50mph in cold, busy, winter conditions. 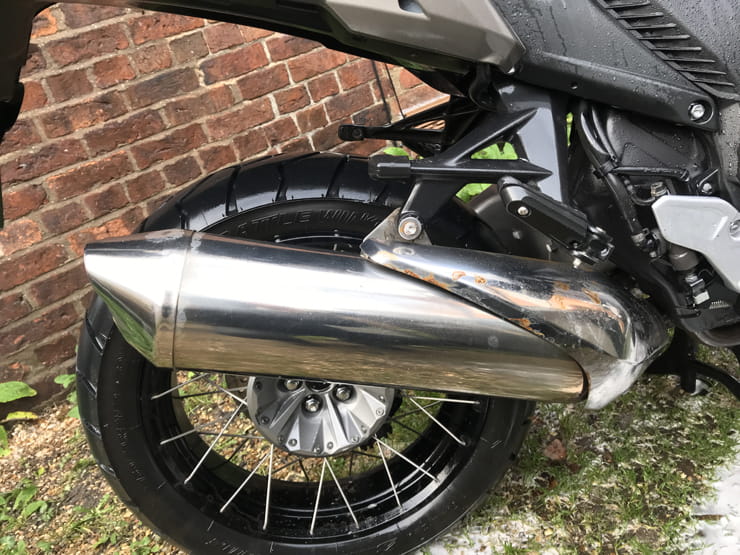 Before the test I would have put money on ‘S’ mode being the least economical and a difference of 0.7 litre is significant enough to be more than just a couple of extra enthusiastic overtakes in ‘D’ mode. My conclusion is that ‘S’ mode keeps you closer to the engine’s most efficient rev range, needing less additional fuel to get going when you want to overtake something. 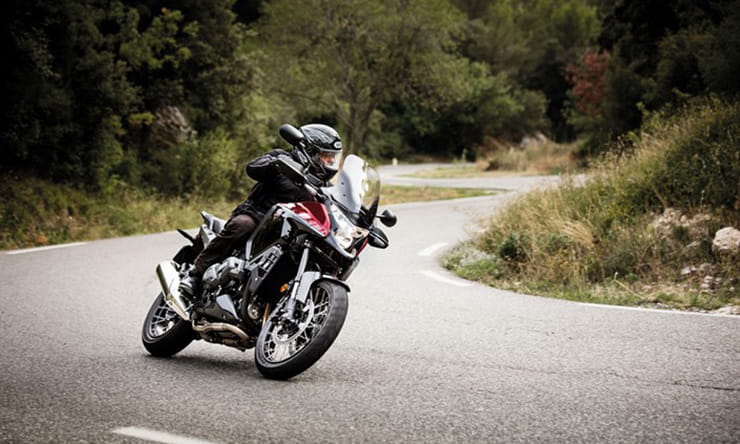