First introduced in 2013, Honda’s three-bike CB500 family has proved a popular step for riders looking to bridge the gap from 125cc learner models to something that little bit bigger.

The friendly characteristics of the A2-licence compliant, 471cc parallel twin motor provides a platform for three, un-intimidating CB500 models which are light and manoeuvrable in urban environments but still have a little bit of poke out on twisty B-roads.

With a target audience of new riders, the naked Honda CB500F roadster, the sporty CBR500R and the adventure-styled CB500X were introduced as a no frills, get-on-and-ride option at an affordable price of just over £5,000. 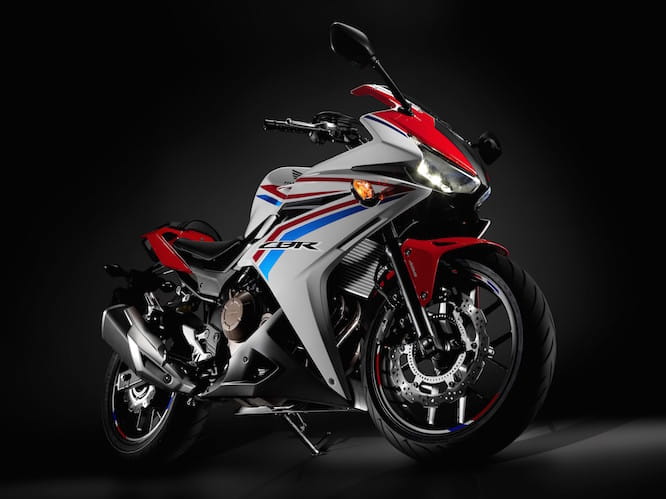 For 2016, Honda has jazzed up the 500cc range with entirely new aesthetics and the addition of some of frills left off the original model.

That sturdy 471cc engine remains untouched, as does the steel diamond-tube frame but the CBR500R, CB500F and CB500X all get a number of updates for the 2016 model year.

The CBR500R, Honda’s A2-friendly sports bike, has been completely redrawn with what Honda call ‘aggressive and flowing new lines from front to back’. Taking away the marketing jargon, what this re-design has done is brought the looks of the CBR500R much more in-line with its larger sports bike siblings, the CBR600R and CBR1000RR Fireblade. In fact, you could say that this update has made the CBR500R the most modern looking sports bike in Honda’s range.

The CB500F’s looks have been brought more inline with the larger CB models. With the CB500X designed to be part of Honda’s larger adventure range which of course now includes the all new Africa Twin.

All three models get a larger fuel tank to increase overall range, with the R and F editions up to 16.7 litres and X up to 17.5. Detail improvements including a hinged fuel cap, adjustable brake levers, re-designed seat and LED head and taillights help to move away from the budget feel of the older model.

Adjustable pre-load in the front forks, a re-designed shift drum for smoother gear changes and a new, redesigned exhaust muffler for the R and F models round off the modifications. 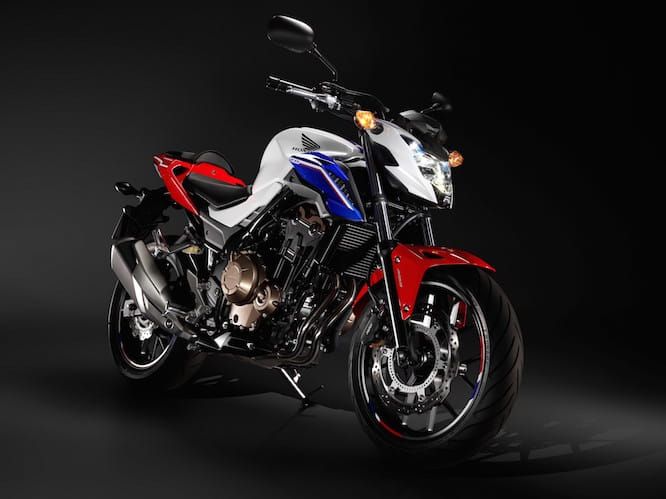 As soon as you clap eyes on each of the new models you can see the extreme difference in styling. They are much more aggressive, from the front headlight to the tail. The lines are sharper, more angular. Make no mistake – they are much sportier than the old bikes to look at.

From a distance, you’d be forgiven for mistaking either model for its 600cc sibling and that’s the whole point. Honda say these bikes are designed to have a ‘big bike’ feel. And they do, both to look at and to ride. They aren’t a 300, which is essentially a 125cc chassis with a bigger engine, they are a full fat 500. A big bike with sensible power for someone looking for the ideal step-up, the ideal step down or a sturdy, fool proof commuter machine.

As soon as you sit on either the CB500F or CBR500R you notice the difference. It’s more refined. For instance, I can adjust the brake lever for my small hands at last – something that really bugged me on my CB500X long termer last year.

On paper it looks as though the main upgrades to these bikes are aesthetic, so it’s actually surprising how different they are to ride to the older models. I spent some time on the older bikes before coming to this launch and while the updated models retain the overall feel, they are much more rounded, complete motorcycles. They no longer feel basic without frills; they now feel like the more premium offering you’d expect from the biggest motorcycle manufacturer in the world. They may not have been completely overhauled but they’ve been taken to the next level. 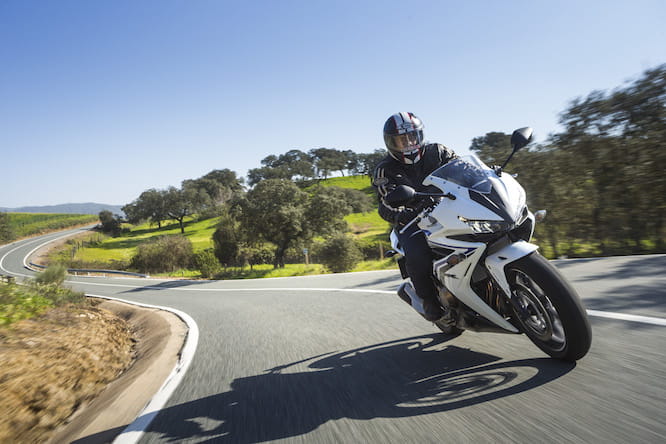 That being said, ‘around 200’ components have been changed to give these bikes their new feel.

One of the modifications is noticeable as soon as you flick the starter switch. A new, re-designed exhaust muffler gives both the R and F models a new, crisp exhaust note. Rather than the dull sounding exhaust on the previous models, you can now hear the 471cc engine squeeze out every single one of it’s 47bhp as you thrash it on the open road.

It’s completely manageable too, which is great for a new rider like me. Both the F and R glide into corners, inspiring your confidence more and more with each turn. The Dunlop Roadsmart tyres help here, it always feels as if they have more to give, that you could crank it over that little bit further should you need it.

Maximum power from the twin-cylinder engine comes at 8500rpm but you never feel short of drive if you’re in the right gear. There’s plenty of torque throughout the rev range to pull you along and there’s always something left back for the quick overtake. A crisper throttle response leads to smooth power delivery with little to no snatchiness in the lower gears. 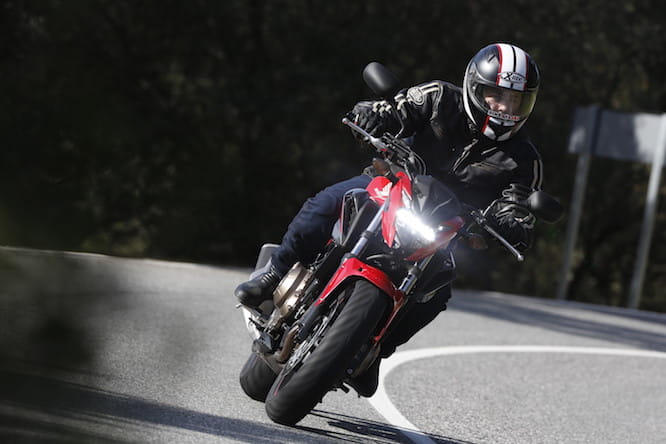 Honda claim 47bhp, which is probably realistic. It rarely feels limited or held back but you do have to make sure you’re planning overtakes, particularly when passing larger vehicles or with a restricted view.

A slight change to the gearbox offers a smoother gear change and this is immediately noticeable as you ride, changing both up and down is almost effortless as it’s much less clunky than on the old bike.

Preload on the front forks is now adjustable; a welcome upgrade on the new models. The front does feel a bit soft, especially under braking, but in theory this could at least be made better with a couple of clicks of preload, something we weren’t able to try with our time constraints.

The brakes suit the machine perfectly; they aren’t sending you over the handlebars as soon as you touch the lever but they’re responsive enough to slow you down in a controlled fashion meaning killing speed for the twisties isn’t an issue. It holds the line around the corner and with the Dunlops glued to the road you can get on the power real early. It’ll cruise at A-road or motorway speeds with ease, but the lack of wind protection may prove problematic if you were riding long distances. 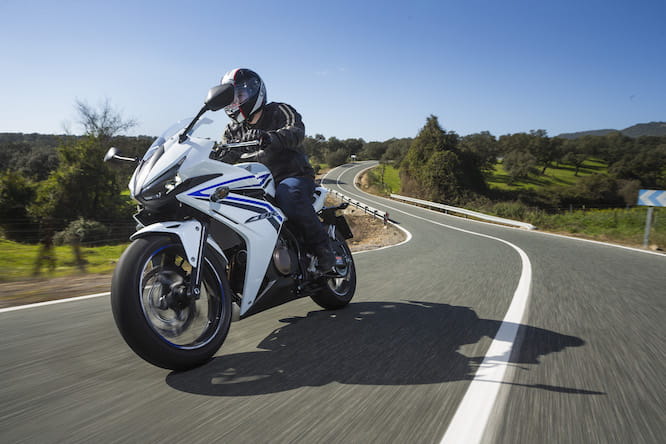 The bloke from Honda told us the set-up of both bikes was identical, meaning the only difference between the R and F we rode was riding position. The F has a typical, sat-up naked riding position with one-piece upright bars meaning you throw the bike into corners like a toy; it gives you a real sense of connection. There was a section of road as we made our way up the Spanish hills which is said to have something stupid like 300 curves. It was intense, but with the F being so manageable it was both effortless and enjoyable to throw it in to turn after turn after turn.

The R has a sportier riding position; the raised clip-on bars mean you’re crouched over the tank but not uncomfortably. We covered quite some distance and the riding position wasn’t a problem at all. It does mean you miss out on the connection the F gives you as you command it through the bends, but on more open, flowing sections the R comes into itself. It’s a mini sports bike which offers tonnes of fun without the compromise of being a difficult bike to ride. 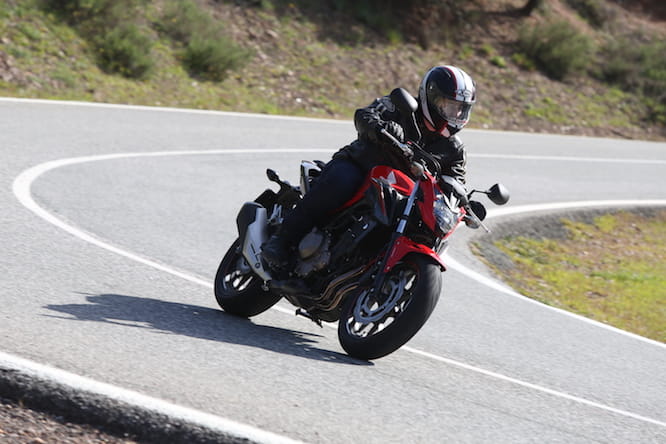 We didn’t quite see the claimed 85MPG, but the 500s were incredibly frugal. Even when thrashed on some of the most beautiful Spanish roads I’ve ridden I was still seeing an indicated 65+MPG.

The old bike was economical, these are said to be even more so and with significantly larger tanks range will also increase. The CB500X long termer I had last year would do 180 miles on a tank, so perhaps we could be looking at closer to 200.

A new rider won’t feel intimidated; they’re ideal for cutting your teeth on two wheels whether that’s as a first bike or a step up from the basic world of 125s yet it’s not so dumbed down that a more experienced rider would be bored. You might not want it as your only bike but if you’ve got a fuel-guzzling toy in the garage and want something to head to work on and save a few pennies this is the bike for you. 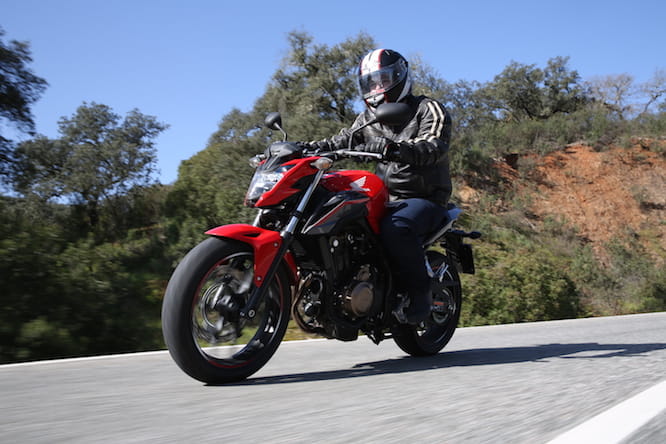 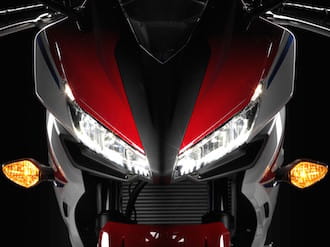 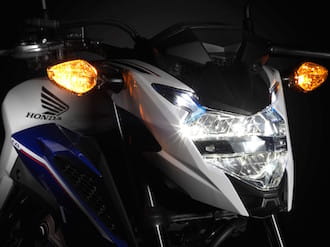 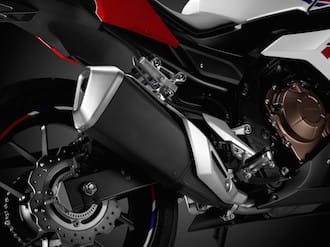 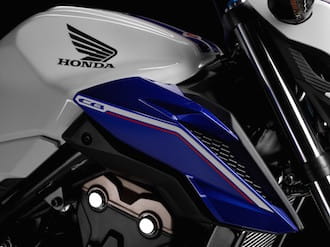