Honda X-ADV first ride - on and off road

Honda’s new X-ADV is a parallel- twin 745cc powered small adventure bike that crosses the boundary between a scooter and a motorcycle. A bike that can be used in the city, but also for the weekender looking for adventures outside of the city.

An adventure scooter may not be something we’re used to, if social media is anything to go by, a lot of people don’t understand the concept, but after a long day riding the X-ADV I’ll say this: Honda need applauding for daring to be different and not just producing a staid and boring big scooter to rival Yamaha’s TMax or Suzuki’s Burgman. 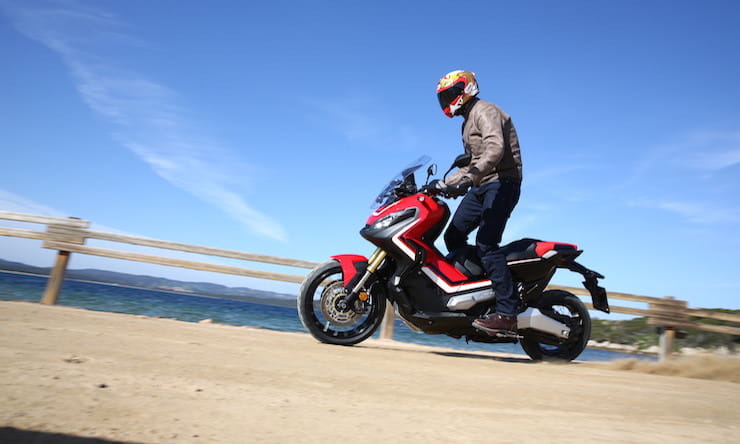 Using the engine from the Honda NC750, but with 500rpm more revs at the top end, the Dual Clutch (DCT) motor is a parallel twin engine but using a 270-degree firing order. That means it feels more like a V-twin to ride, and gives a decent throb, just like its bigger Honda CRF1000L Africa Twin brother. The character is very similar in fact with a lazy power delivery, big pulses through the motor and that same relaxed feel.

It makes 52bhp at 6250prm, and is designed for low and mid-range torque, carrying its weight low in the frame for improved handling. The DCT means twist and go, or change gear manually using flappy paddles on the left handlebar. Three different modes are available, standard D for drive or Sport 1 or Sport 2. Clever, baffling algorithms mean the bike selects the right gear for the right time, with the S modes hanging on to the revs longer.

The chassis is a tubular steel frame, with space built in for 21-litres of under seat storage big enough for a full-face helmet, or adventure helmet with a peak. There’s a light and a 12v power socket under there too.

Rake and trail is 27 degrees, with 104mm of trail and a long wheelbase of 1590mm, sitting on an aluminium swingarm. It runs on a 15-inch rear wheel and a 17-inch front wheel with tangentially opposed spoked wheels and sits on Bridgestone dual-purpose Trail Wing tyres, running a 160-section rear.

THE CONCEPT AND THINKING BEHIND THE X-ADV

But is it a scooter? Is it a motorcycle?

I debated long and hard with the bunch of UK bike journalists on the launch today in Sardinia, and even with the bike’s design project leader Maurizio Carbonara, the Italian designer behind the bike’s futuristic motorcycle and the designer of the Africa Twin, among others.

He claims it’s a motorcycle. And after 140 miles in the seat of an X-ADV, I think he may be right.

The X-ADV started as a dream from the mind of Italy-based Daniele Lucchesi, the 49-year old fan of rock band The Who, and the creator of the original ADV idea and concept.

By his own admission, it took several meetings, a lot of dedication to the cause and his vision, and a number of years to convince his bosses in Rome to build the project that he dreamt of.

Every time he tried to tell his Japanese boss about his dream of an easy to ride, practical, accessible motorcycle that could be used all week in the city then ridden to the beach at the weekend, without having to be an expert rider, he got the same answer: “Daniele, I do not understand.”

After many approaches, concepts, sessions drawing up tents and t-shirts in an attempt to bring the True Adventure concept to life, going as far as creating their own fake copy of MCN with the bike on the cover to make it feel real, he finally got Honda to agree to put some budget into the project.

A team of designers went away to a house in Italy in the countryside for 10 days. With no laptops, just pens and paper (and we imagine more than a few beers), the team holed-up and created the True Adventure project.

Through various stages including clay model, then 3D modelling, the bike was signed-off and Maurizio and Daniele headed off to the Honda Kumamoto factory team under the guidance of Large Project Leader, 43-year-old Kenichi Misaki. The combined Japanese and Italian team brought the project to life with a lot of passion and flair, and not a few arguments.

The concept then appeared at the major European motorcycle shows in 2015 to gauge reaction, before becoming the X-ADV, for production. Misaki said: “When my boss told me what they wanted to build - a city adventure bike - my first thought was: ‘why?’. But then I discussed it with Maurizio and Daniele and got the idea, I really understood it, so we began the development process, became really passionate about the bike and the development of this bike of the future. Our dream has come true.”

Think of it as a motorcycling SUV with the ability to do town and city, commute to work, and delivered in an easy to ride package that’s also fun at the weekends. It breaks the mould of big scooters, and brings something new to the class.

It’s an all-round adventure motorcycle in all true senses of the word, a mini Africa Twin with under seat storage

SO HOW IS IT TO RIDE?

The long travel suspension, the adventure-inspired bodywork and the spoked wheels bring a flair to big scooters that has been lacking. It looks every bit an adventure bike when parked next to an Africa Twin in Sardinia, too.

But it’s not just looks, they may have played down the off-road ability a touch since it was unveiled, but Honda have made sure it can handle trails too.

It has 150mm of ground clearance (compared to 120mm for an Integra), a built-in bash plate, rebound and preload adjustable 41mm upside down front forks with radially-mounted Nissin calipers taken from the Africa Twin in twin 310mm discs. They’re certainly not messing with the specs and quality of the bike.

The fit and finish of the many plastic panels is second to none, neat features like the aluminium heel guards bring an extra level of quality, and the screen is adjustable in height using a clever quick release system. It would be a great system on an Africa Twin in fact.

Most of the day I left it in its highest position. Most of the time it’s fine, I felt a bit of buffeting on my shoulders when at sustained high speed though.

The riding position is every bit adventure bike. The tank sits low down between your legs, your feet sit on large footboards, just like any other scooter. The handlebars are from the Africa Twin, as are the handguards, and it feels every bit the real adventure bike. The seat is wide, and at 820mm is reasonably high. An Africa Twin’s adjustable seat height is 850mm or 870mm by comparison.

I’m six foot four inches tall (lanky), so most scooters are cramped in the knees for me and my knees often hit the dash on big scooters, but not this one. It feels tall, leggy and with plenty of room. Optional pegs bolt on to the side of the frame for off-road riding, but also give an attack positon for sportier riding.

The dash is designed to be inspired by the Dakar and gives the right feel. It’s easy to read with a digital speedo and rev-counter. It’s keyless too, the first Honda to use the keyless system since the RC213V-S, Honda’s MotoGP bike for the road. Just stick the key in your pocket and turn a knob on the headstock. The seat can be lifted flicking a switch, and so can the petrol filler flap.

It may weigh 238kg on paper, just 4kg lighter than the CRF1000L Africa Twin DCT, but it carries it so low that you never really give it a consideration. It’s so easy to ride, stick it in D or one of the sport modes and off you go. It’s the least stressful motorcycle you’ll ever ride, lazy even, but still manages to deliver it with soul and passion.

There’s air intake noise right in front of you, and the pipe makes a subtle thud, again, reminding me a lot of the Africa Twin. The DCT flappy paddles mean it’s all more engaging than most other big scoots running CVT drive.

Pop up and down the gears and play with the revs, or leave it in D and ride the wave without too much thought other than the stunning Sardinian scenery and roads.

The suspension copes with any bumps you throw at it, and even off-road it went up trails easily, where a TMax or equivalent would be bashing the hell out of itself. In reality nobody is REALLY going to take one off-road, but it does it on gentle, sandy and gravelly tracks.

For bumping down kerbs, riding out pot holes and coping with the state of UK roads it makes a pleasant change to ride a big scooter with lots of suspension travel, good quality damping and a good feel from the forks.

The long wheelbase means it’s stable at speed, even when approaching flat out around 110mph, but quick handling in the bends. At first the tallness of the bike and the relatively high seat feels strange, but not for long. The wide bars give loads of leverage to flick it left and right. Try too hard and you’ll deck out some sidestand bolts that look like they’ve been put in to protect the exhaust decking out. It’s never an issue though. The ABS cuts in quite early too when riding it fast. But the brakes are powerful enough.

It’s easy to ride everywhere on full throttle, feeling the seamless shift subtly engage the next gear, doing all the work for you before it hits the rev-limiter just after 6250rpm, but even then, it’s still doing 56mpg. Ridden sensibly, Honda claim 77mpg. Think of today’s ride as worst case scenario, so they’re bound to be bang on with that. Every gear change is smooth and there’s no squat at the rear when it shifts. That’s seamless for you.

The seat gives proper 140-mile comfort, and in general it’s so relaxing to ride. On a twisty road it’s a giggle and could be ridden by your Granny, but still manages to get me chuckling away on a particularly twisty section. It’s a laugh.

Whatever you throw at this bike, it will do it. You can ride it a long way, it eats up town for breakfast, it will ride through a forest, take a pillion in comfort, or cope with being loaded up.

In the same way big adventure bikes are actually tourers in an off-road outfit, the X-ADV is a motorcycle that just happens to share some features, like its footboards and under seat storage with a scooter. It’s an all-round adventure motorcycle in all true senses of the word, a mini Africa Twin with under seat storage in a way, and anyone that says an adventure scooter could never work is wrong.

But in its class of big scooters, it’s about right against its true rivals. The Yamaha TMax comes in at £9399, the BMW C650 is £9600, and the Suzuki Burgman at £8999. I know which one I’d buy. The Honda X-ADV does everything those bikes do as well, but looks like a proper adventure motorcycle that has been dropped in from the future, is classily built, carries a level of cool the rest will never achieve, and allows you to do so much more with your bike than just commute to work. It’s a two-wheeled SUV with its own unique abilities. I’d have one. 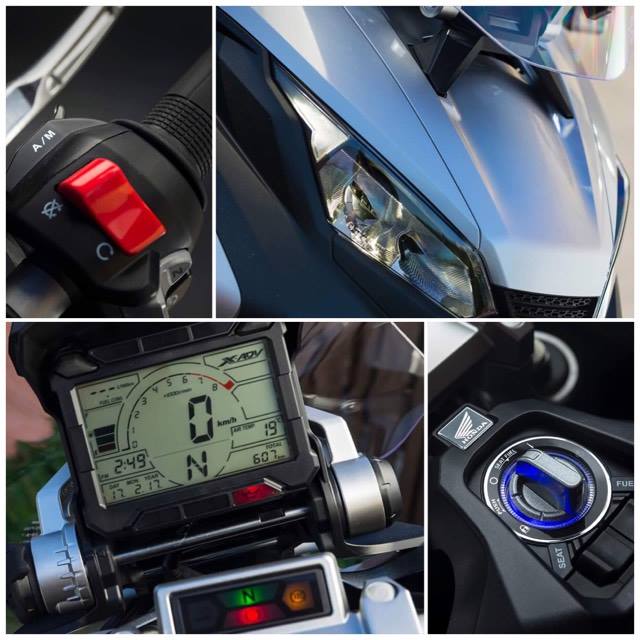