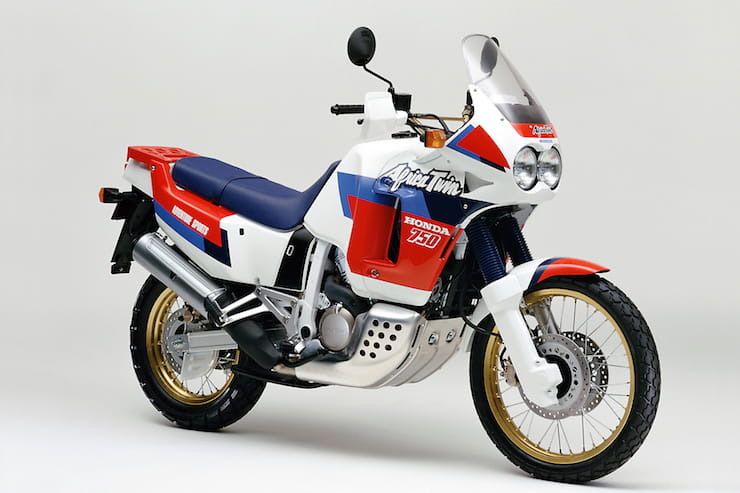 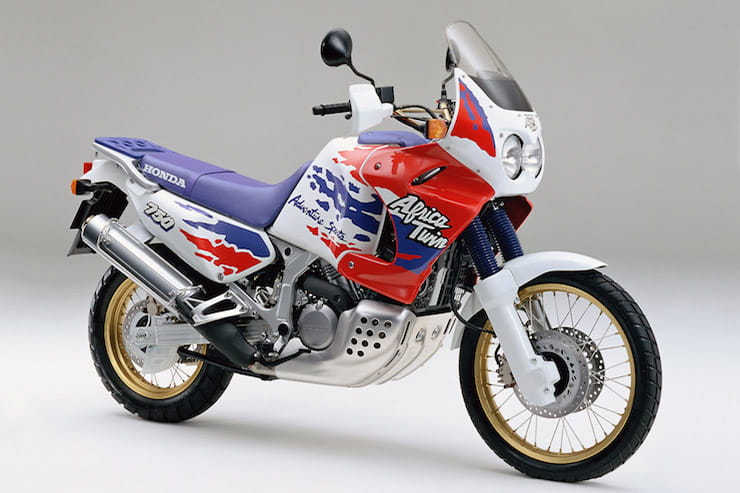 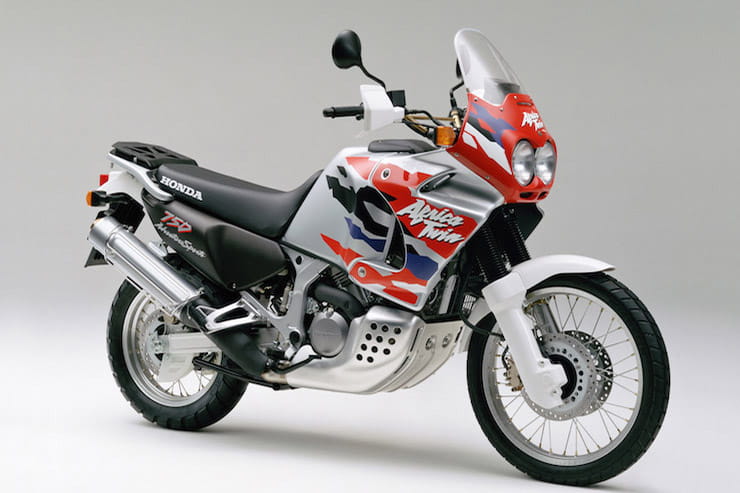 One of the best of the late 1980s Dakar Rally replicas, the original Africa Twin proved a long-lived hit for its blend of HRC racer styling, genuine comfort and versatility and class-leading quality and reliability – even if it couldn’t match the performance of Yamaha’s Super Ténéré and Cagiva’s Elefant. Though ultimately outperformed by the new 1000cc adventures characterised by BMW’s first R1150GSA and Honda’s own Varadero, its legend inspired the modern CRF1000L Africa Twin while its durability and class garnered such a following good examples can still fetch almost £5K. Its 60-odd bhp may be a little soft by modern standards but it remains a stylish, versatile adventure bike with plenty of ‘modern classic’ appeal.

Now considered something of a modern classic, prices of good 750 Africa Twins, partly because of their proven high mileage reliability and quality compared to rivals of the time, are on the up and easily exceed those of the contemporary Yamaha Super Ténéré, Suzuki DR800 and so on. The best, and most expensive are the last, post-1993 RD07 version with curvier bodywork and 1996-on RD07A with taller screen and improved seat. Expect to pay £4-5K for a clean example with 35K on the clock. Purists, however, may prefer the more angular RD04 (1990-93) which doesn’t seem to wear as well so can be had for £2750-£3500. While the very first 650 RD03, which is rarest of all as wasn’t officially exported into the UK, is smaller, lighter and has just 57bhp and a single disc, is prized for its rarity, quality HRC-built features and originality. Reckon on around £3K – if you can find one. 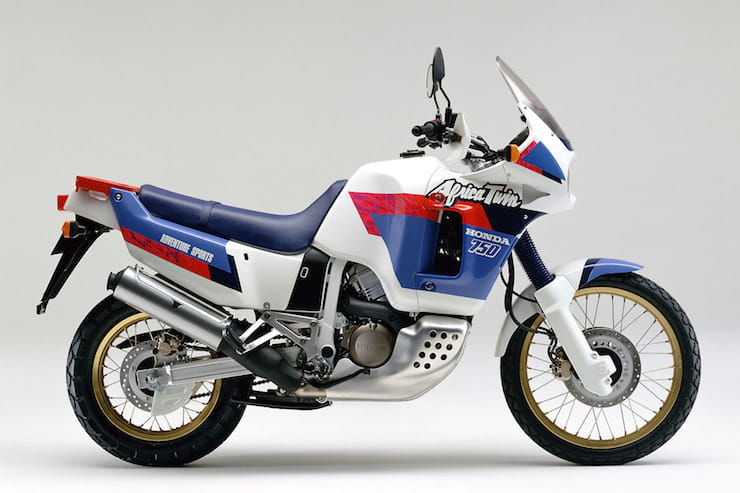 With essentially a 4mm overbored version of the preceding, sensible Transalp’s 52-degree, single cam, three-valve V-twin, the 742cc Africa Twin couldn’t match the sharper performance of the Super Ténéré's all-new, DOHC, four-valve parallel twin, which put out 8bhp more. But what the Twin lacked in sheer horses, like many Hondas it more than made up for with a friendly, flexible torque delivery, easy manners, real world usefulness and solid dependability. No, 62bhp doesn’t sound much for a full-size adventure, but the Twin is relatively slim and narrow by modern standards and it’s easy, immediate drive is ample for the type of riding most bikes like this do. It’s relaxed when motorway cruising, easy (without needing to stir the gearbox) around town and pleasingly neutral on winding country roads. Best of all, decades after production ended, it’s also proved utterly dependable (apart from a few typical Honda foibles of the era) and good bikes with over 60K on the odo are common.

Although the 750 Africa Twin evolved from the 1990 RD04 to the 1993 RD07 and 1996 RD07A variants, the 742cc 52-degree V-twin powertrain was unchanged throughout and on the whole has proved solidly reliable, as has the typically Honda-slick five-speed gearbox. The steel exhaust is better than most but, due to age and some rotting, many have been replaced by now. A decent replacement is around £400 so it’s important to check. Though solid, access to the engine is fiddly, particularly with the revised bodywork on later models. Regulator/rectifier failure as with most 1990s Hondas, is common and many owners upgrade to a more modern item such as a MOSFET, as the standard item can frazzle electrics, blowing bulbs, fuses and even boiling the battery if it’s kaput. Carbs can lose fuel on older models, so there is a fix using different vent tubes and connectors from RD07A models. One of the big issues faced by Africa Twin owners is the fuel pump failing. A Facet fuel pump cures both these ills and is a worthy investment for £40-60. A broken or sticking choke is another common issue – owners either get the system blanked off if it’s sticking, or replace the plastic, easily-broken choke cable retainer with a metal part. While the CDI units can also cause problems. OE replacements are expensive (around £400) but you can replace with a pattern version for around half that – check out specialist Africa Twin websites for latest prices (www.xrv.org.uk and www.ruggedroads.co.uk). Some CDIs suffer from loose connections internally and can be repaired by carefully splitting the unit and re-soldering the internals. 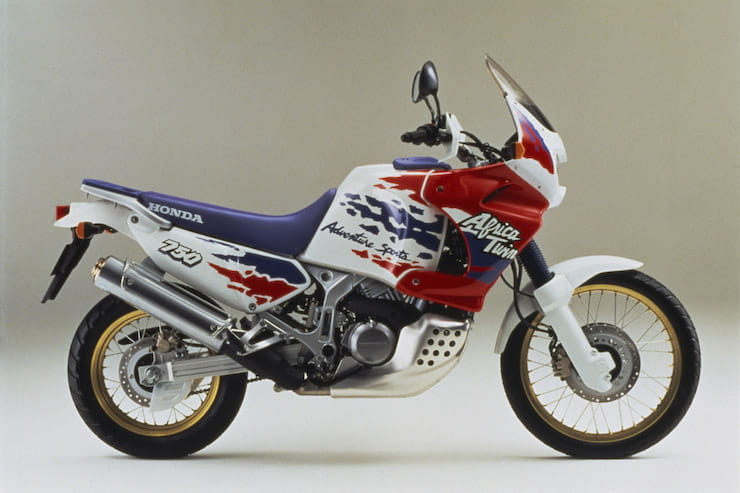 Being a fairly soft, single cam, three-valve design also means the 750 Africa Twin’s V-twin is reasonably economical, too. Average MPG figures in the 50s should be expected (significantly better, for example, than Yamaha’s XTZ750 Super Ténéré) resulting in a potential range from that big 23-litre tank of around 200 miles. Ridden hard or off-road, however, will reduce that dramatically.

Hondas often have brilliant ergonomics and real world usability and this was equally true of the Africa Twin. Though upright and substantial, its slim seat, great riding position and plush ride helped it stand out as an excellent all-rounder. Think ‘off-road style VFR’ and you’re not far wrong. Manageability is far better than looks suggest; the narrow front tyre and wide bars mean steering is nimble through traffic yet secure and stable at touring speed and the slightly over-soft suspension gives a plush, sumptuous ride. The OE fork springs are up to the job come replacement time but heavier oil (10wt) is a good move. The RD03-RD07 models had air-valves so damping can be adjusted but don’t put more than half a bar in or you can do internal damage. Although the rear shock was adequate most will be tired by now so expect to replace it, especially if the bike has been used hard. Reckon on £350-500 for a good, fully adjustable, unit. The box-section steel frame is also generally solid but, along with the rear subframe, can suffer from surface corrosion. The alloy-rimmed wheels, too, can be a problem area. It pays to get the rims and spokes checked for corrosion, as it’s a big problem on older bikes or neglected ones. Little wonder some go for new/refurbed rims. Early signs can be rust coming up through spoke holes. Although a big bike, at 185kg it’s far less of a handful than modern ‘super adventures’ so you should have few concerns. 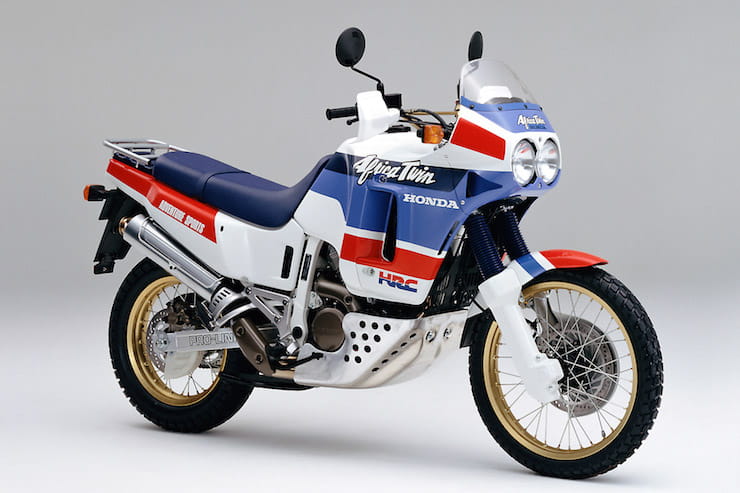 Brakes, along with tyres and suspension, usually suffer on older bikes in comparison to modern machines and that’s just as true of the Africa Twin. Although the 750s benefitted from an extra front disc compared to the 650 and at the time its stopping power was better than most of its rivals, the twin-piston calipers lack bite and have a spongey action by modern standards. Short of a complete front-end transplant they’re best improved with some braided lines and different pads.

Late 1980s/early ‘90s Dakar replicas were ahead of their time in terms of paving the way for today’s adventure bikes which have proved so popular, partly for their long distance comfort and touring ability, and the 750 Africa Twin was undoubtedly one of the most comfortable and touring-friendly of the bunch – hence its continuing popularity today. Although the seat is fairly narrow it’s decently comfortable, especially on the later models. The ride is plush; its big tank is good for 200 miles and the fairing gives reasonable weather protection, too. The restyled1993 RD07 was a significant step up from the 1990 RD04 original, in this respect, while the 1996-on RD07A is better still thanks to a new seat and taller screen.

The early ‘Dakar replicas’ aren’t a patch on the latest modern adventure bikes when it comes to equipment and gizmos but in its day the Twin had more class than most plus, especially with the early models, genuine ‘racer replica’ appeal – the first HRC-built 650 RD03 has been likened to ‘a desert racer RC30’ which also came out in 1988 and it’s not hard to see why. That said, it’s still pretty Spartan: there’s no electronics and little luxury. From 1993 it gained the gimmicky ‘Tripmaster onboard computer’ (basically just a set of clocks looking like a Dakar road-book) but anything more came via aftermarket accessories, of which there were – and still are – plenty: ranging from luggage kits and high screens, to uprated suspension and off-road protection. Again, checkout the likes of www.ruggedroads.co.uk. 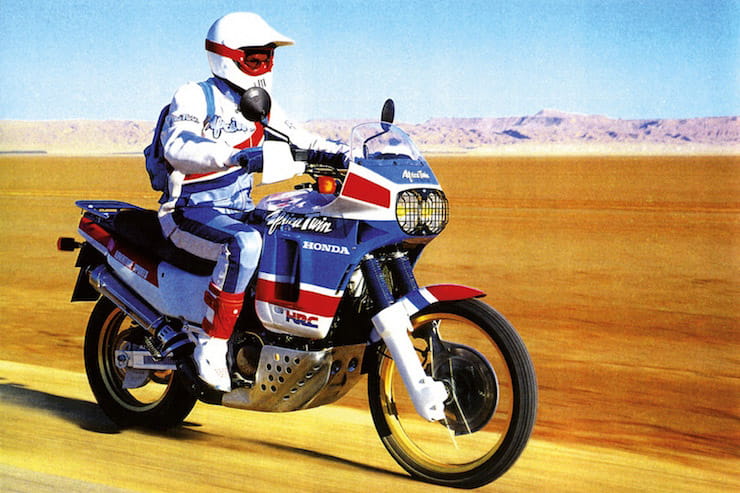 The 750 Africa Twin was a decent, versatile ‘Dakar Replica’ in its day, which, thanks to its durability, classic style and evergreen relevance, has endured to become THE classic adventure bike, with the escalating prices to match, today. Ten or 15 years ago you could have got a scruffy example for £1500. Today, clean, lower mileage 750s start at £4K while the rare HRC 650 is an appreciating classic in its own right. The later RD07/A examples are dynamically and usefully the best, if sometimes a little garish. But the original 650 and RD04, especially in HRC colours, are slightly classier and better built although, sadly, most are fairly tatty by now. All, however, while still OK and versatile performers, stand out as if you were parking an RC30 next to Fireblade.