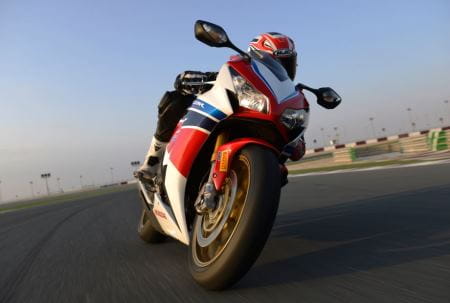 The Fireblade SP is the first of its kind — a hotted-up, track focused version of Honda’s famous four. That means that this Sport Production model is the most exotic, high specification ’Blade since the original CBR900RR revolutionised the super-sports world, 22 years and more than 200,000 sales ago.

The SP is seriously special; dripping with classy parts including Ohlins suspension, Brembo Monobloc front calipers and sticky Pirelli Supercorsa SP rubber. It even gets blueprinting of the standard Fireblade’s 999cc engine, which is revised for 2014 with reshaped ports and gas-flowed combustion chambers, adding 2bhp to give a max of 178bhp.

And the SP also comes with the obligatory dose of Honda’s up-yours attitude, as demonstrated by that 1992-model forebear with its quirky 893cc capacity. In recent years that determination to be different has meant refusing to follow the super-sports herd by adopting multiple engine maps and traction control. Even the SP sticks to the same approach. You don’t even get a quick-shifter for your £14,999.

What you do get is a bike that’s powerful, poised and refined even by the high standards that have allowed the Fireblade to remain so competitive all these years. The SP looks mint in its white, red and blue HRC inspired livery, it’s nicely finished and it’s smooth too — thanks to Honda’s blueprinting of the engine by careful selection of pistons to within a gram of the target weight.

That difference isn’t obvious without riding the standard ’Blade too, any more than I’d claim to notice the extra two horses, or the slightly reduced output from 7-9000rpm. What is clear and very welcome, every time you open the throttle, is the Honda’s superbly crisp fuelling. If any bike can do without traction control it’s this one (though personally I’d still regard a good system as worthwhile). 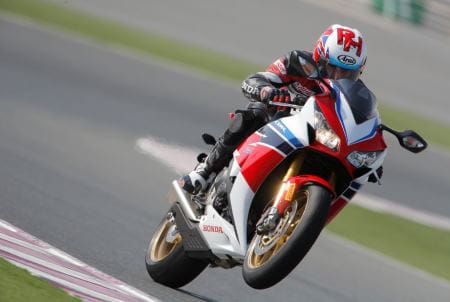 Even this tweaked Fireblade can’t match the top-end charge of some rivals but it’s mighty fast, and was still accelerating into a strong headwind at over 160mph when I ran out of room at the end of Losail’s main straight. High-speed stability was impeccable despite the breeze, and hauling on the anchors confirmed that those Brembo Monoblocs have a Tosa-like bite.

The launch bikes were fitted with a revised version of Honda’s optional C-ABS. Front brake activation is smoother and the linked system is refined, the foot pedal now adding less front brake, and none at all when used gently. Feel through the lever is subtly different to a normal ABS system, and the C-ABS adds over 10kg of weight, but I’d pay the extra £600 every time.

Handling is predictably excellent, the Ohlins suspension giving a taut and immaculately well controlled ride, especially after the rear had been firmed up slightly from Honda’s standard settings. The Swedish firm’s extensive development work with Honda also resulted in more rigid triple clamps and in the frame’s swing-arm pivot area being made slightly less stiff, for added feel.

Combined with the slightly revised riding position — clip-ons slightly wider and lower, footrests 10mm more rearset — the result was light steering plus an outstandingly planted feel from the front end. Ironically this didn’t prevent one tester (er, this one) losing the front end on the first lap of his second session because he didn’t realise that the wind had cooled the front Supercorsa SP while the bikes were being refuelled. The Pirellis were otherwise sticky though less so than the race-ready Supercorsa SC2s that were fitted for the afternoon sessions.

This ultimate Fireblade is designed as much for the track as the road, which inevitably means it’s slightly less of an all-rounder than the standard model. Its single seat is firmer, and allows a cut-down rear subframe that saves a kilo of weight. But the SP is still a relatively rider-friendly machine with a broad power band, neutral handling and impeccable manners, as well as Honda’s typically thorough detailing and quality of finish.

Whether it goes to the front of the super-sports pack and justifies those SP initials depends on what you want from a cutting-edge superbike. Riders who value ultimate horsepower and electronic sophistication would be better off elsewhere. This is the best ’Blade yet, and it’s the most exotic member of that illustrious family — an already powerful and refined bike made better still with a selection of top quality components, and with its Fireblade philosophy intact.