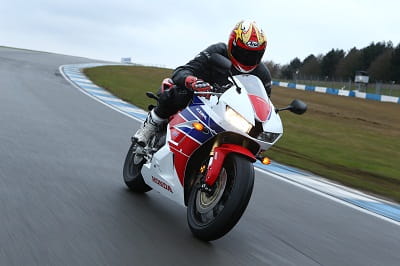 Ron Haslam. A TT winner, holder of 61 top ten finishes in 500 Grand Prix, a man who can lap Donington Park faster than just about anyone in the world, owner of the best sideburns in racing, creator of the Ron Haslam race school and father and mentor to WSB hero Leon Haslam. Ron is simply Experience with a capital E. When Ron speaks you listen.

So it’s with some trepidation when I’m waiting to go out at the 2013 Honda CBR’s press launch at Donington Park. It’s been snowing all morning and myself and Tim from MCN ask Ron what we need to know about riding today. He says in a matter of fact way: “I’ve done five laps and can’t get any heat in the tyres at all, the track temperature is so low it just spins. I’ve been trying to scrub the tyres in and I can’t even get the glaze off them. Just go steady. You can brake really hard in a straight line though, the brakes are amazing. But just don’t use first gear as the grip is so bad the back end just comes round on you, the engine goes dead and you have to whip the clutch in to bring it back in line.”

To make it worse, James Whitham, former World Supersport race winner and two-times British champion, says that Donington Park is notoriously unpredictable and the grip inconsistent in the wet. 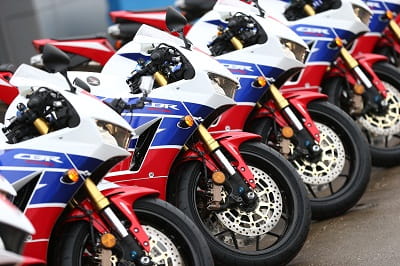 I can’t wait to get out, but am slightly fearful. Despite having raced at Donington Park numerous times, tested dozens of BSB & WSB bikes at the track, finished fourth in a Six Hour Endurance race at Donington, had two second place club race finishes in the wet and a pole position at this very track, today I’m scared and experience doesn’t seem to count for much, as Ron, one of the most experienced track riders in history, just explained.

Thankfully Ron leads us out and shows us the kind of speed and smoothness that myself and the nine other bike journalists should be operating at. To ride with Ron is to watch smoothness personified. He thinks and the bike turns with the smallest effort.

Breaking myself out of a daze of watching Ron, what’s instantly obvious is that the bike occasionally stutters under load at medium revs.

Trying to exit Donington’s first corner – Redgate –  and rolling on the throttle around 5000rpm sees the bike spluttering and struggling to fuel slightly. It's similar to the feeling you get when a bike’s traction control is kicking in and it’s cutting the ignition slightly. Except this bike doesn’t have traction control.

Thankfully I only felt this on one bike, and Honda are looking into it. Very weird indeed. 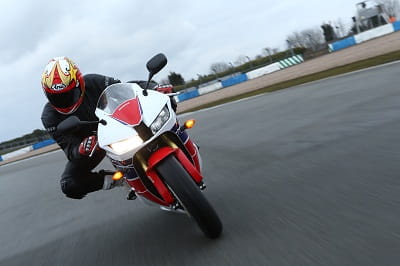 That aside, the bike feels every bit a CBR600RR. Technically it's an evolution from the 2012 bike but parked next to each other the two couldn’t look any more different.

The styling is very stubby-nosed, with more than a touch of old Yamaha R6 about it, and aerodynamic technology that has been lifted straight from the 2011 MotoGP project – Honda’s RC211V.

Look round the bike further, and there's the new lightweight 12-spoke wheels with a design lifted straight from the track, and the seat unit is pure RCV paddock sexiness. Combined with the HRC colours giving it that air of grace, and still what I reckon is the best paint scheme in motorcycling right now. At the Milan Show I thought the bike looked a bit Pug faced, but see it and it looks great.

Get deeper into the bike and there’s the usual air of class. There’s a new patented air flow system that comes straight into the bike’s headstock, the clocks and upper fairing and screen all supported by the new system.  There’s also a revised version of Honda’s electronic steering damper which works off speed sensors and the throttle position sensors to increase the damping at speed and under heavy acceleration, but decreases damping when at low speeds. It works, that’s all you need to know.

The forks are new for 2013 and use Big Piston technology, just like on the Fireblade, except the Blade has 43mm forks and the CBR uses 41mm forks. There’s preload and rebound adjustable from the beautiful blue anodised fork tops too so you don’t have to get on your hands and knees to change suspension settings, unless you want to adjust compression at the bottom.

Honda’s John Hensman says the pressure in the fork is reduced so the fork operates more accurately and consistently. In fact, there’s very little difference between the pressure on a fully-loaded fork, say under heavy braking, and an unloaded fork, whereas in a conventional fork the difference is massive, this can cause the suspension to feel harsh at full stroke, in some circumstances. 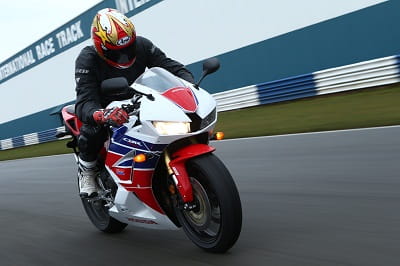 It takes me a while to feel this, if I’m honest. But as soon as we start to up the pace a little, especially in a straight line, and slam the brakes on hard you can feel just how stable the bike is under braking, and how well-damped and plush the front forks feel. It may not sound like a massive deal, but it feels noticeably different over bumps and under heavy braking.

In fact, the brakes are astounding. Brake as hard as you dare in incredibly difficult conditions from high speed (around 120mph today) and the bike stops without you even realising that ABS is fitted. The system combines front and rear brakes together and stops the bike diving so much under braking. It's great on the track and on the road should be a revelation.

The new system uses brake-by-wire. That means when you squeeze the lever at anything above 6mph, it sends hydraulic fluid to a braking power unit. This then sends an electronic signal and applies the amount of brakes required depending on the lever pressure.

When you pull the lever, you’re actually getting the feeling of a conventional brake but it’s through rubber springs rather than the amount of hydraulic fluid you’re sending to the calipers, and the computer is doing all the work.

It sounds terrifying to a luddite who’s first bikes had a cable and a drum, but in reality you’d never know it’s fitted, it really is that good, and unlike conventional ABS systems, Honda’s CBR600RR system doesn’t give any pulsing at the lever when the ABS is kicking-in.

The new C-ABS also allows the system to separate when applying light pressure to the rear brake, like in a track riding situation where you want to tap the rear brake gently to tighten up your line or scrub of one or two mph. 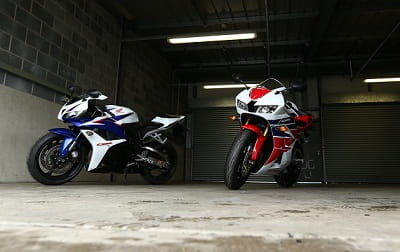 Ron says the Honda system is now so fast to operate that even he can rarely beat it, and his son, WSB race winner Leon Haslam, can just beat the system.

He also says that in the dry, using the C-ABS at its maximum capacity, he can brake fully hard until the crash bobbins are on the floor at full lean, the system is that good. Not something I’ll be trying today!

On the power (on a bike that’s not spluttering), the engine pulls cleanly all the way to maximum power at 13,500rpm and on to 15,000rpm. Though I have to say that after spending a couple of weeks riding the Triumph Daytona 675 recently, the Honda feels a bit lacking in comparison. It’s never disappointing though, and on track the free-revving motor happily lets you spin the revs up and dialling it in as hard as I dare out of the grip-free corners. 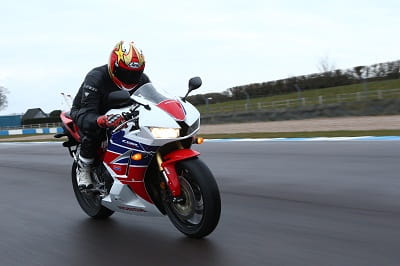 Get tucked in and you’re in the usual CBR bubble - racey, but never uncomfortable. There's plenty of room to move around, reposition your weight on the way in and out of corners, and play super hang off as I try to keep the bike upright mid-corner and on the gas, and avoid falling-off!

Ron Haslam flew past on the brakes more than once to show me just how hard you could push it, and managing to keep him in sight for a few laps (because he let me), you can see how well the bike can be ridden, even in the worst track conditions I’ve ever ridden on! 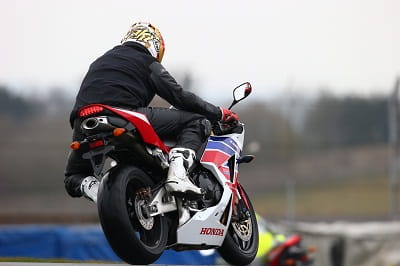 More than once I had a massive slide as the rear tyre hit paint which was sprayed on to the starting grid, but the bike just snapped back in line as quickly as it had happened. As Ron said afterwards: 'That will keep you awake."

I realise this test if by no means comprehensive, conditions meant that we’ll have to wait a couple of weeks to find out what it’s like on the ragged edge, in terms of handling, and general feel, miles per gallon and that kind of thing.

Honda stated at the press launch and technical presentation that their aim was slightly contradictory. They wanted to create a bike that improved performance on the circuit, but on the other hand, it also needed to be improved for entry-level riders.

As long as that fuelling problem was just a glitch on that one bike, I’d say they’ve done exactly that. Refinement rather than revolution, but still a massively impressive bit of kit.

The CBR600RR legend lives on and long may it continue.

Pictures by Double Red. Thanks to James Wright, Tom Hobbs at Honda, The Ron Haslam Race School, Donington Park and the boys from KCS. 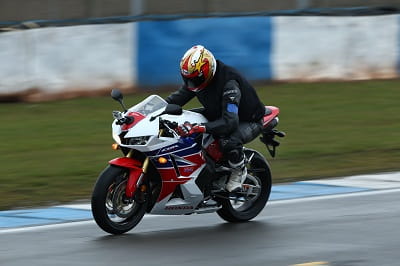 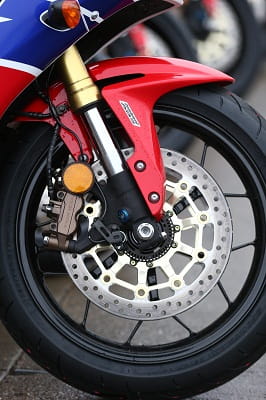