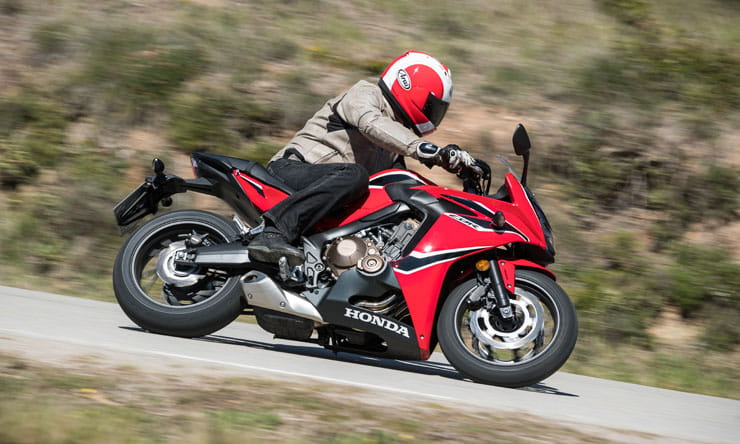 Also tested by Bikesocial at Honda’s world press launch in Barcelona recently was the final ‘double act’ of its revised 2017 model line-up – its significantly updated CB650F and CBR650F.

Unless you’ve been marooned on Mars for the past decade, the odds are you’ll already be familiar with Big H’s middleweight fours. Based on the same, budget-orientated engine and rolling chassis, both were first introduced in 2014, although their basic concept and raw mechanicals go back much further than that.

The ‘naked’ version, the CB650F, can be traced back to the old CB600F Hornet and continues Honda’s long and proud tradition of versatile but fun middleweight fours – hence the strikingly ‘Siamesed’ exhaust headers which are intended as a styling ‘nod’ to the iconic CB400/4 of 1975.

The faired version, meanwhile, the CBR650F, is based on exactly the same mechanicals – engine, frame, cycle and body parts, etc – and is intended as a modern reinterpretation of the classic, affordable and hugely versatile CBR600F2 so popular in the 1990s.

With the dawning of Euro4 this year, however, both the CB and CBR 650 required at least a partial makeover so, as has been with so many other models this year, Honda took the opportunity to give its two 650s a more thorough refresh. 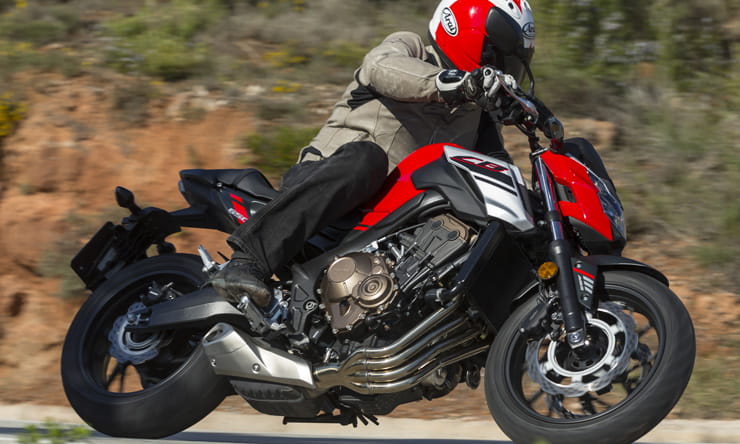 So, although both the new CB and CBR look largely familiar, there’s actually been a whole raft of changes all with the intention, Honda say, to give added style, extra sports performance and improved handling without sacrificing any of the duo’s versatility, value and all-round appeal.

At the heart of those changes are the ones to the Hondas’ engine and powertrain. Although the basics of the 16v four, including 649cc capacity, are unchanged, a larger intake duct along with shorter inlet funnels and a revised exhaust all help to boost not just peak power (by 4bhp) to 90bhp at 11,000rpm but also maximum torque slightly, which now tops out at 47.2lb-ft @ 8000rpm from 46.7lb-ft. A more rorty soundtrack is another result. Also helping in Honda’s ambition towards a more ‘sporting’ delivery is a revised gearbox, with all the ratios from 2nd to 5th now shortened to enhance acceleration.

Both bikes’ chassis get significant tweaks, too, the highlight being the switch to new, 41mm, preload adjustable Showa ‘Dual Bending Valve’ forks up front which are claimed to give a more sophisticated and progressive ride. 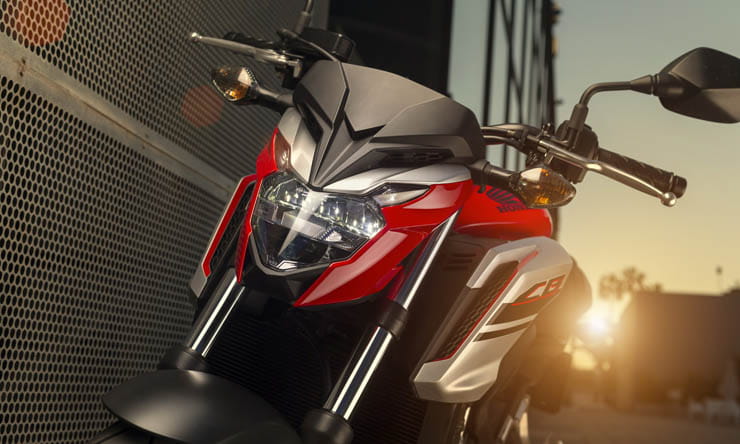 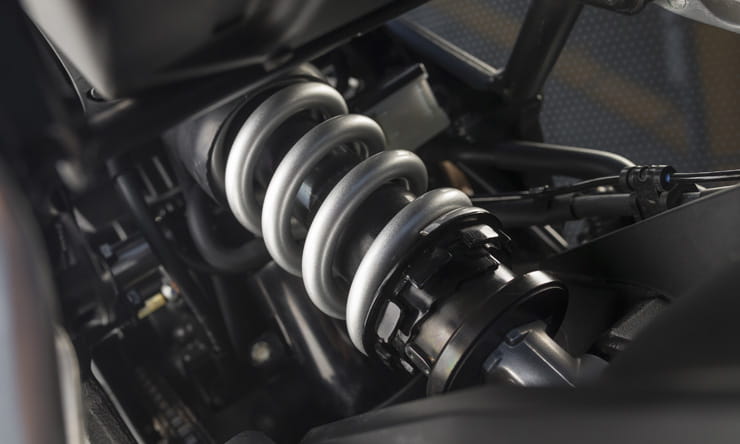 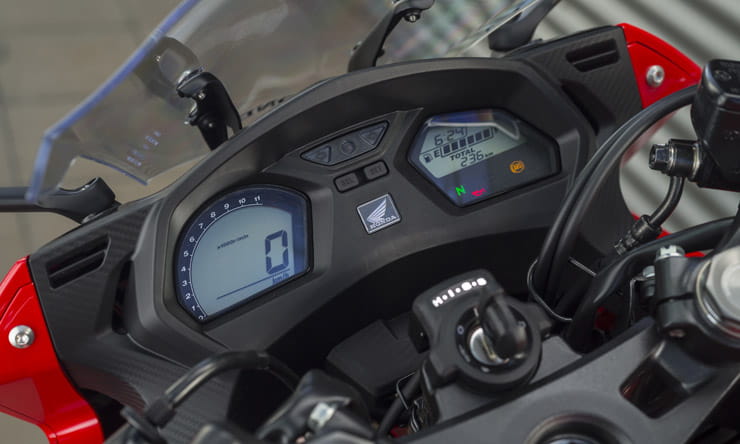 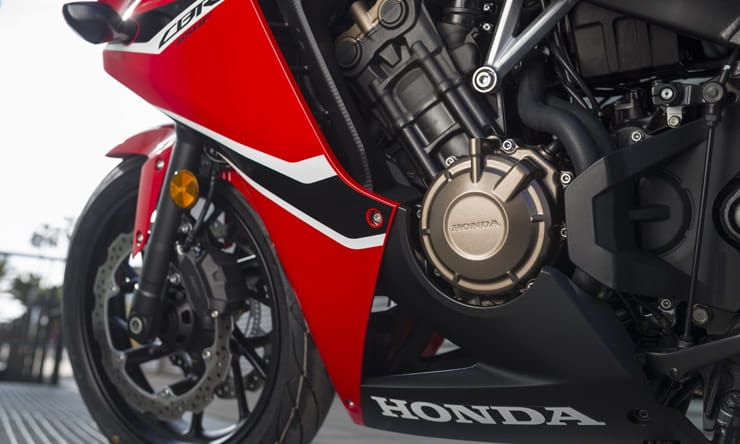 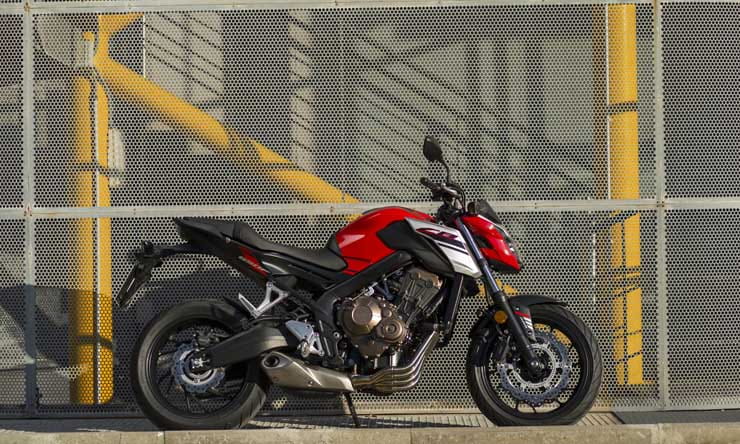 While, in terms of simple ergonomics, both have been revised to be distinctly more sporty and aggressive, as well. Their handlebars are lower (by 13mm of the CB, 90mm on the CBR, whose bars are also 30mm narrower than before); styling has been sharpened, with what Honda call a more ‘mass forward’ design, mostly through new noses complete with fresh LED lights front and rear. And both also get racier more youthful colour schemes, with the faired CBR’s red/white/black now virtually identical to that of the new Fireblade superbike this year. One of the old CBR’s schemes, if you remember, was distinctly unexciting plain grey.

In short, both the CB650F and CBR650F have never been so sporty.

But the $64,000 question, of course, is: do they deliver? And the simple answer to that, on the strength of our day long ride aboard both thoughout the sinuous mountains roads inland of Barcelona, is a categorical ‘yes’. On both machines.

We tried the naked, CB650F version, first and, I have to say, as a fan of the outgoing model, I wasn’t expecting great things. For me the ‘old’ 650F was one of the hidden gems of Honda’s line-up: a handsome, well-proportioned almost old school middleweight four that had enough performance to entertain (without exactly blowing your socks off) blended with classic Honda quality and an irresistible sub-seven grand price tag. Simply, this was a good-looking, ‘proper’, middleweight four roadster, unencumbered with electronics and gadgetry yet with plenty of Honda quality and being sold at middleweight twin money.

But I needn’t have worried. Although I personally find many of the new CB650F colour schemes a little garish and ‘yoof’, particularly in this red combo (other options are a more plain white or metallic blue) and it lacks the classic, understated simplicity of, say, the older versions red/white/blue with gold wheels ‘tricolore’ option, everything else about the newcomer is either reassuringly familiar or distinctly improved.

On board, though a tad more inclined forward, a little more aggressive in posture, the riding position is also still both completely natural and intuitive – Honda has always been brilliant at getting rider ergonomics spot on, after all. Even more familiar is the view ahead and the initial ‘get-go’. Snuck into the nose cone are unchanged, twin LCD digital displays which take their styling cues from traditional analogue round dials and display pretty much everything (digital speedo, tacho, fuel gauge, clock, odometer etc) that you could want – although a gear position indicator is still conspicuously absent. While though eager to spin up and free-revving, that 649cc four is also tractable to pull away effortlessly and the whole shooting match, though meaty and reasonably substantial, like all middleweight fours should be, is also un-intimidating, well-balanced and easy to manoeuvre. The CB-F’s not a gossamer-light and dinky middleweight twin like, for example, Yamaha’s MT-07, but nor is it imposing and an effort to get on with.

But it’s as the pace hots up and speed and revs rise that the changes to the 2017 CB650F become most apparent. Our first 20 miles or so were along the motorways heading out and south of Barcelona, cruising of 80-plus – sppeds that quickly reveal the exposed shortcomings of many roadsters, yet the CB remained a reasonably pleasant place to be. That slightly lowered and tucked attitude dropping me out of the wind enough to make a worthwhile difference.

Then, after turning off, with the roads turning as twisty and addictive as so many in southern Spain can, the CB became a scratching joy: the added poke, hunger for revs and more wailing soundtrack reminding more of pricier machines like Kawasaki’s Z800/900, Yam’s old FZ8 and Suzuki’s GSR rather than budget ones closer to the Honda’s price such as, say, the old 650 Bandit or Yam FZ6. The Honda is a far, far better bike than both of those.

It’s not an enormous leap up from the old, sure – but then there was never that much wrong with the old CB650F. But the worthwhile improvement in three key areas certainly tells. The CB650F’s image is sharper, fresher, more youthful. Its attitude in terms of ergonomics is that bit more aggressive and its ability, thanks to a 5bhp punchier engine, more raucous soundtrack and, due to the new forks, a noticeably more planted, sophisticated and precise front end, gives the confidence to scratch and slice that bit harder. Or, to be brief, the new CB650F really is about 5-10% sportier than before. And all of that (and Honda classy quality) for just £6599 (or just £500 more than the twin cylinder MT-7 or Z650 but a whole £1100 CHEAPER than Suzuki GSX-S750, the only other four that comes close) is, in my book, something of a steal.

But if I was impressed with the naked version, I was, surprisingly – as again, I didn’t expect that much difference – even more struck by the new CBR650F.

Again, at a cursory glance, there doesn’t seem that much significantly new to get excited about with the new CBR650F. And, on face value, you’d be right. It benefits from the same engine and suspension tweaks as the CB but this time, the more aggressive, ergonomic shift is more pronounced, the styling improvements more effective and the overall result, more cohesive and even more appealing.

Where the CB’s flat bars are now 13mm lower, the faired CBR’s clip-ons are full 90mm lower and 30mm narrower, to boot. The new full fairing, meanwhile, is distinctly sharper than before and, with those new LED lights front and rear, manages to look far less ‘budget’ as well. Finally, it’s all set off in properly sporting, 2017 Fireblade-alike red/white/black livery (although a less lurid plain white version is also available).

Even so, although all of that means the revised CBR looks significantly sharper and racier than before (especially when fitted with the accessory seat hump, while carbon mudguard, hugger and more are also available) all of that pales against the experience on the move.

Don’t get me wrong: the new CBR is no ball-out, nose-down, arse-up extreme supersports weapon like, say, Yamaha’s new R6. That’s not its appeal at all. Instead it’s a combination of two things. First, when you initially climb on board, everything’s as natural, comfortable and familiar as can be, but with a slight sports bias (if you remember the original and hugely popular CBR600F2 you’ll get the idea), which is pleasing and refreshing in itself, And then, far better still, it quickly proves itself to be both the same, brilliant all-rounder as before and yet one, when the twisties appear, a genuine sportster and one that, thanks to the mods mentioned before, is far more invigorating, exciting, precise and reassuring. I had one particularly mad-cap 20 mile-blast that afternoon on the CBR, rarely out of 3rd gear, screaming that engine between hairpin after hairpin that is hard to believe would be much more fun on anything else, Yet, when motorway cruising back to Barca then wriggling through the city centre streets, it was also perfectly comfortable, practical and versatile. Middleweight all-rounders don’t get any better.

I referenced earlier, briefly, the iconic CBR600F2 that proved so successful and so popular in the ‘90s. Honda’s more recent CBR-Fs have always tried to recreate the appeal of that bike, with limited success. This time round, however, I think they’ve got it bang on. From the moment I sat aboard this latest version I was genuinely reminded of that bike for its perfect blend of sports and versatility. This new one does the same thing. What’s more, with a higher spec, now virtually identical performance, and better looks, the facts bear my impressions out. A CBR600F for 2017? I don’t think praise gets much higher than that. This bike really can do it all and really is the bike for all reasons. And, at an unchanged £7399 price, it remains brilliant value as well. 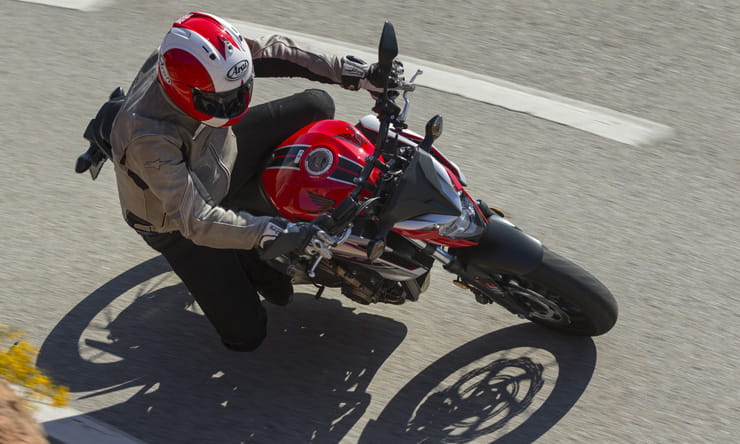