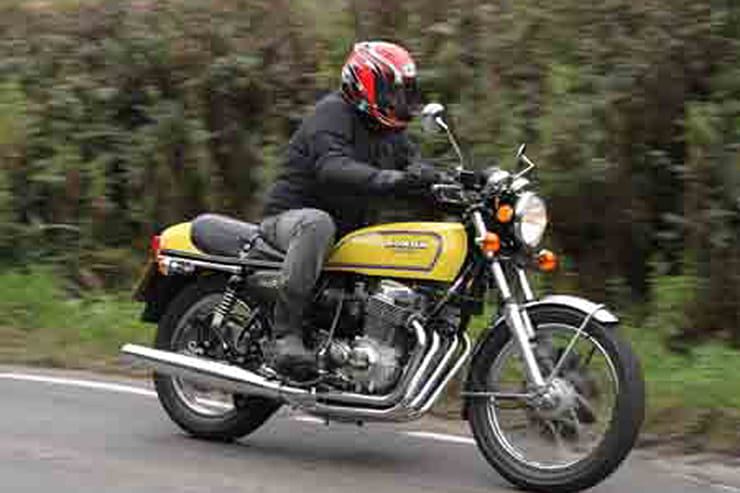 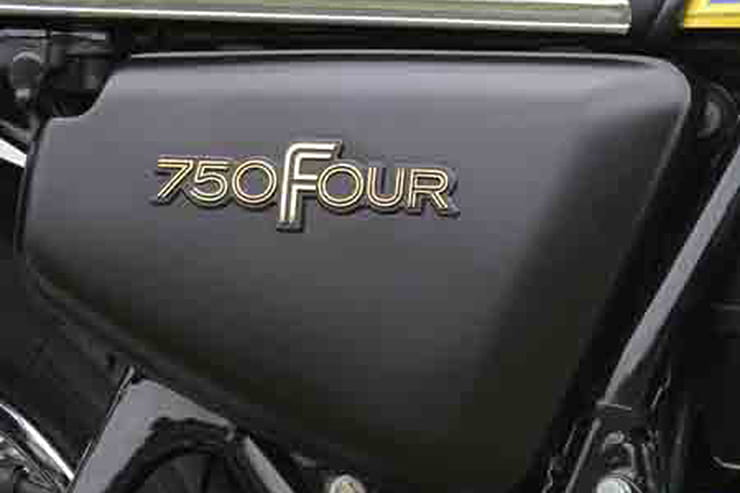 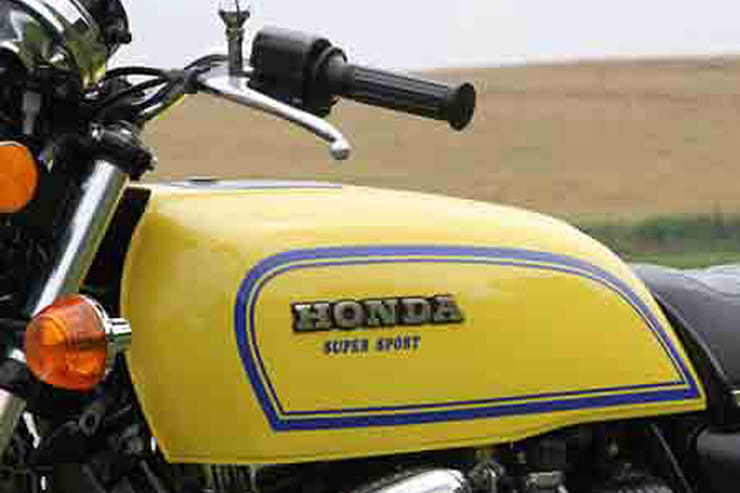 For many, the transition into the classic world has to be a gentle one. Start with a bike, which will, in a classic way, be not too far away from the motorcycles you already know and like. Your new old bike should make you want to ride more classic motorcycles – not put you off for life.

One of the very best of accessible classics is the Honda CB750. The single overhead cam engine is utterly bullet proof and starts on the button, first time every time, despite having a token kick-start. Spares and available expertise is good, with Honda having built around 553,000 of the things and, with prices of early K models now £10K plus, if you go for the later, restyled F1 (or F2), which is still relatively unfashionable but a decent ride, it doesn’t have to burst the bank, either.

So you’re ready to go classic and there isn’t a cloud on the horizon? Well, not quite. The early 750 Hondas have now become seriously stupid in terms of price with a good sprinkling of £15,000 machines being offered – albeit these are in mint condition – and virtually nothing usable now below £9K.

But there is a solution to the conundrum: by 1975, the gloss was starting to wear off the bike and so Honda looked to freshen things up with a ‘sports’ version, the restyled F1 which, although it shares much of the early bike’s mechanicals, is nowhere near as much in demand. Today, a good F1 or F2 can easily be had for between £4000 and £5000, with rough ‘project’ bikes available for far less. 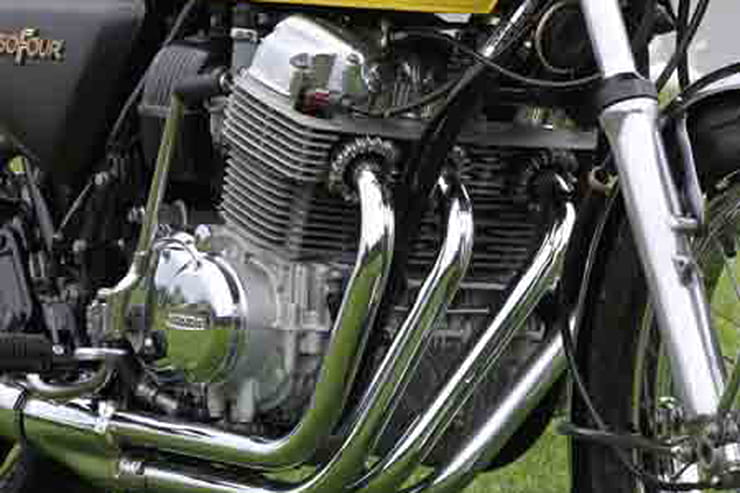 Soichiro Honda’s original target power for his four was 67hp – allegedly to be one more bhp than the best Harley of the day – and, with very few mechanical changes, that’s what the F1 delivers, too.

Although not earth-shattering by modern standards that’s plenty for most, especially at it’s also spread very widely, from something in the region of 5000 to 9000rpm. Almost as important is that the engine is docile right from tickover and so will be an easy transition for someone who has never ridden a classic before.

At the heart of the CB750F1 is one of the finest motorcycle engines ever built – Honda’s iconic single overhead cam, five speed, four-cylinder engine. Given a very regular supply of clean oil, these motors are good for vast mileages and are as fuss free as it is possible to get with a classic. And even though the F1 was billed as a supersports version of the CB750, in practical terms the engines are identical.

It’s also a gentle introduction to the delights of classic bike style home maintenance. Tappet adjustment is a bit fiddly but can be done at home. Carb balancing is well within the scope of a newcomer to bike maintenance and chain adjustment is simple. In every respect, the F1’s engine is as user friendly a classic as it is possible to find.

Its clutch is light and simple to use and the five-speed gearbox will feel familiar, having a modern – down-for-down – left-hand pattern. However, the clunking and clanging which accompanies many gear changes will be something of a shock to classic virgins. Don’t worry – it’s what 750 Hondas do.

Finally, for the F1, the original CB750’s iconic four pipes were out to be replaced by a single collector exhaust. 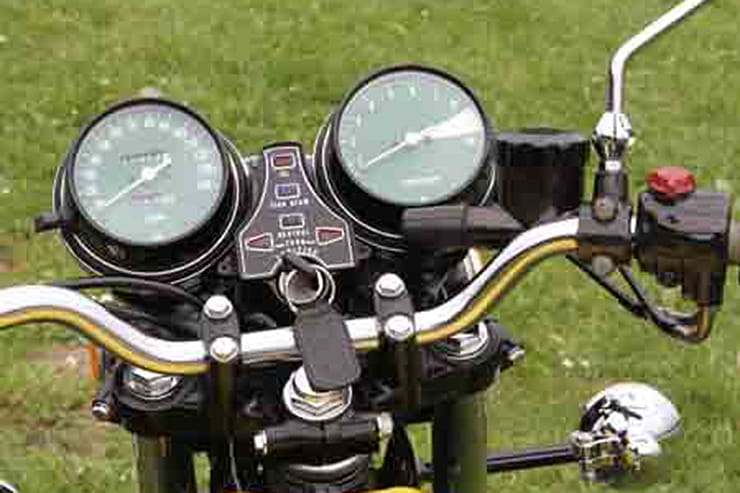 It’s a four-cylinder 750, so economy is never going to be as good as smaller capacity machines with fewer cylinders. That said, the CB750 is also in a fairly soft, by modern standards, state of tune and is comparatively low-revving, too, so, with reasonable or gentle use, mpgs of around 50 should be possible.

The handling of the CB750F1 is fine too, although if you were expecting a shorter, sharper steering version of the older CB, you’ll be disappointed. Due to the bike’s age, it’s also important that the suspension is uprated. It’s essential to fit a pair of good quality, modern rear shocks – the original units were dire – and haven’t got better with time. The front forks, meanwhile, are fine – but watch out for tired fork springs and exhausted oil, particularly if the bike is a standard, original machine. But with the suspension sorted and a pair of modern tyres, the F1 really can be ridden briskly. 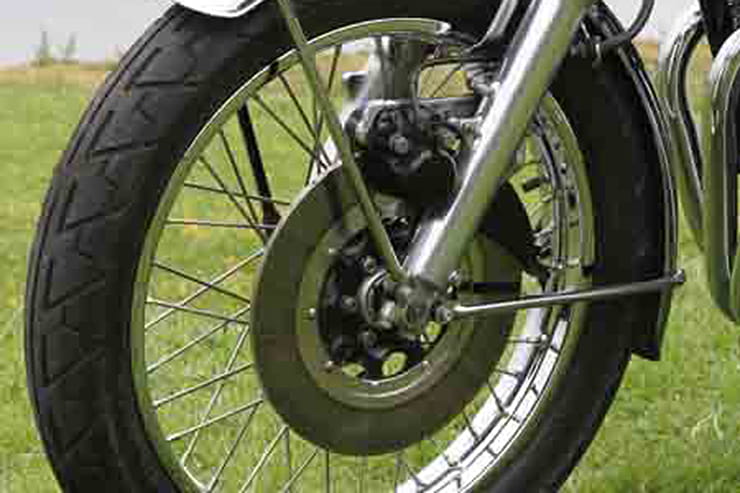 The great weakness of the F1, indeed of many Japanese bikes of this era, are its stainless steel disc brakes. These were fine for American test riders in sun drenched California but were buttock-clenching marginal in wet, cold Britain. However, modern disc pads have simply transformed the brakes and now they are superb – by classic standards of course.

On the highway, the F1 is thoroughly modern. It will cruise at an utterly relaxed 70mph all day. The saddle is wide and comfortable and the riding position excellent for a long ride. I would have no hesitation about taking an F1 to Misano, and back, without a moment’s hesitation – although it’s obviously not a modern, full-dress tourer.

Bikes of this era obviously don’t have any of the modern electronic rider aids we’ve become so used to – in fact the F1 doesn’t have anything by way of modern equipment and luxuries. So, there’s no luggage or weather protection, fancy instrumentation or comforts such as heated grips and cruise control. Instead you get twin analogue dials and an electric starter – and that’s your lot. Although I have sung the modern feel of the F1 it still remains very much a classic. The large, easy to read analogue speedometer and rev counter are straight from the early Honda days and the styling is unmistakably mid-70s. 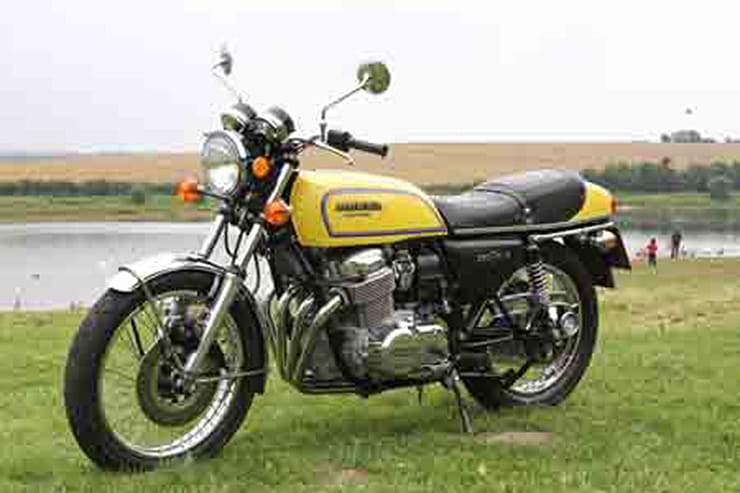 The F1 was effectively a restyle of the classic CB750K inspired by the successful café racer look of the earlier CB400F. Although a success at the time, it’s performance was virtually unchanged and, today, classic purists prefer the original K – which means that the F1 is something of a classic bargain and a great option for a newcomer to classic bikes.

Regarding buying one, the advice is to proceed very, very carefully and slowly. There are plenty of F1s about and there’s no need to rush into buying one. Spend a couple of months sifting through the ads and you will find a nice, unabused, standard bike at a good price. F1s are now at a price level where they will never depreciate so you could have a lot of fun for virtually no expense – and there are not many bikes about which this can be said.

Three things we love about the CB750…