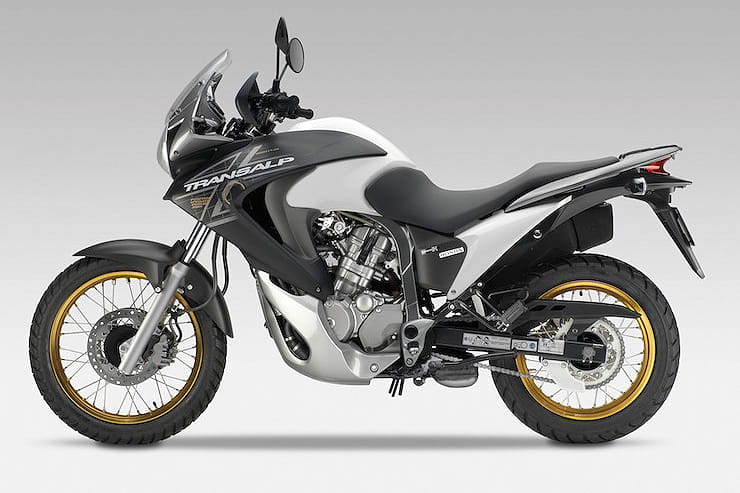 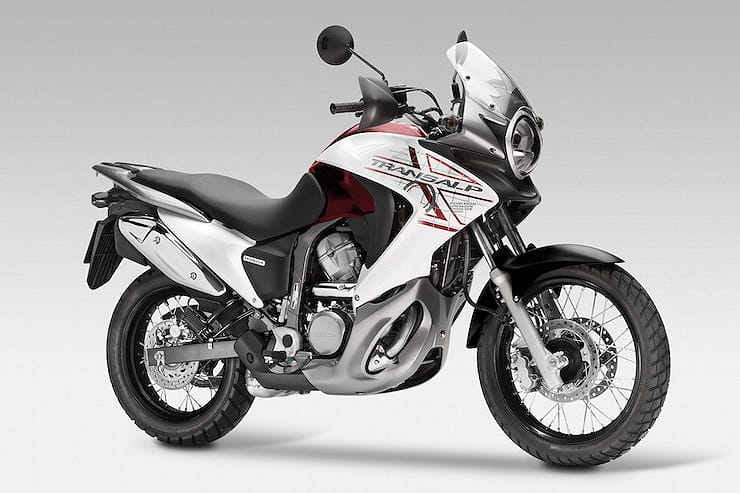 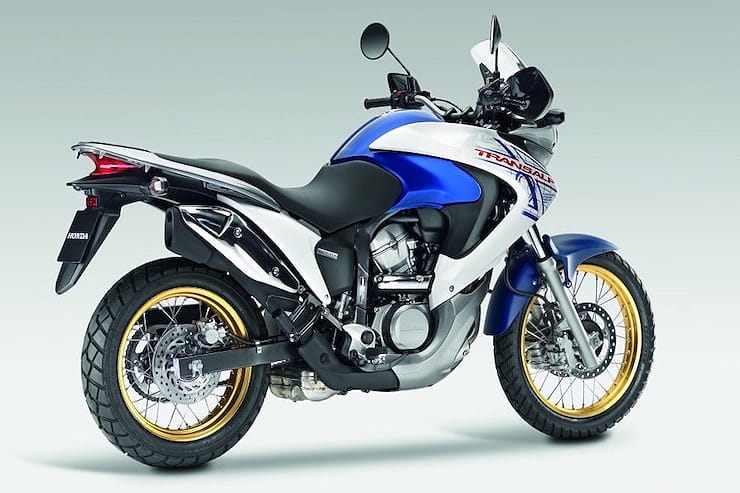 Honda’s original Transalp, the XL600V in 1987, was genuinely ground-breaking: the first V-twin, half-faired, Dakar Rally-inspired middleweight ‘adventure bike’ when the only alternative were big, single cylinder trail bikes. Twenty years later, however, after one facelift, two enlargements/updates and the addition of four-valve heads and fuel injection, although still a pleasant, versatile all-rounder, fresh, punchier competition from the likes of Suzuki’s VStrom 650 and Kawasaki’s Versys 650 left it struggling a little, so much so that it was finally dropped from Honda’s line-up in 2012. That said, it’s still an easy, versatile all-rounder, is a doddle to ride, is OK looking, its mechanicals are proven and reliable, its Honda build quality generally good and, having fallen out of fashion and now somewhat forgotten, can be a good value used buy, too.

The original 600 Transalp was a fairly luxurious, premium Honda product, with the prices to match although over the years that status dwindled somewhat. As a result, by the time this final incarnation came out, although still slightly pricier than its growing competition, it could no longer match them in performance and modernity, even if it was still pleasingly refined and cultured. In 2008, this latest 59bhp Transalp cost £6775 when Suzuki’s slightly punchier – although admittedly more budget-orientated – VStrom 650 produced 60bhp and could be had for £500 less. As a used buy today, though, the Transalp’s a slightly different proposition. Its quality, durability (and the fact its more mature owners tend to look after them better) makes a Transalp still a quality buy, where nearly all Suzukis of the same vintage will be by now far tattier and with used prices starting at just £2800 can be a real bargain, especially as most tend to come laden with luggage and quality accessories. 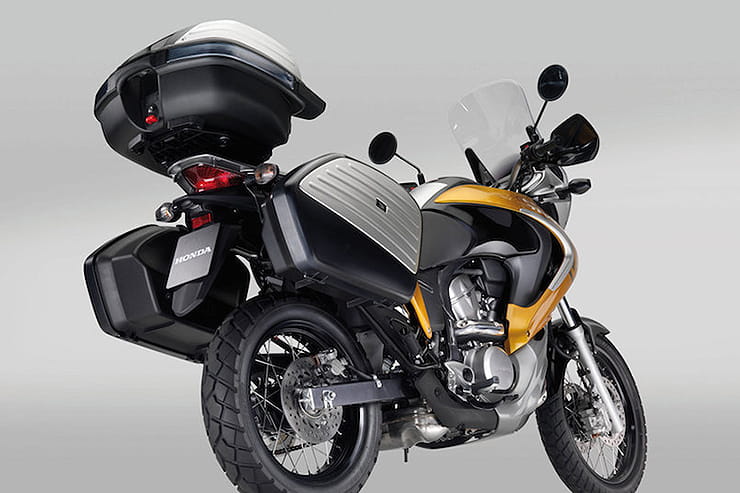 In this final four-valve, fuel injected 680cc guise, the Transalp’s SOHC V-twin produced 59bhp which, although not quite enough to match the latest 650 twins from Suzuki and Kawasaki, compensated for it by being smooth, flexible and unburstable. As such, the Honda’s a willing puppy of a performer, has plenty of appeal as a first big bike (particularly as its seat is much lower and novice-friendly than many adventure style machines), will happily cruise all day at 80mph and is impressively reliable and durable, too. Its broader, slightly beefier midrange means that, for the most part, having just five instead of its rivals’ six-speed gearboxes is sufficient. If you can live with that slight performance deficit, the Transalp offers genuine year-round, long distance, trouble-free easy motorcycling and decent examples with well over 50K miles aren’t unusual.

Although the Transalp’s engine grew from 600 to 650 (in 2001) and finally 680cc all were based on the same liquid-cooled, 52-degree, three-valve SOHC unit originally developed for the Deauville tourer while this final version also gained fuel injection and four-valve heads. As a result, the Transalp’s reliability record is near-legendary, thanks to its over-engineered, understressed powertrain, years of refinement and decent build quality. As long as its service record is complete and it has been decently looked after you shouldn’t have any major problems. The five-speed gearbox is typically Honda solid and smooth, too, with no major problems reported, although it’s a shame it wasn’t upgraded to a six-speeder in this final incarnation. The steel exhaust, as with the rest of the bike, is the usual OK Honda quality (although this last version was actually made in Spain, not Japan) but considering its age it’s still important to check for rot and surface rust. 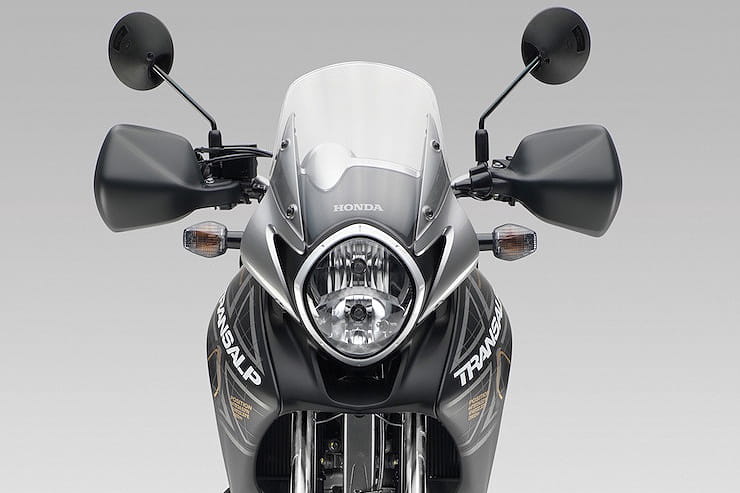 Like with its larger, more aggressive looking Africa Twin stablemate, which is based on the same engine, the Transalp, being a fairly soft, single cam, three-valve design also means that more economical than most, too. High 40s (or even 50s) MPG figures are easily attainable, especially considering how gently many are ridden, giving a potential range from the 17.5litre tank in excess of 150miles, although if you’re laden down with a pillion and/or lots of luggage we’d expect that to drop significantly.

This is another area where the Transalp was increasingly overtaken by newer rivals, although, to be fair, it was always conceived more as a leisurely tourer than any kind of performance machine. With its steel double cradle frame and conventional, mostly unadjustable suspension, the Transalp’s chassis is designed more for steady comfort than speed. Slightly larger than many rivals it also has roomier ergonomics, especially for two, and a plusher ride. As such it’s easy-going, comfortable and idiot-proof and also, thanks to its low-ish seat, a viable buy for relative novices. The flip side of that, of course, is that it’s also less exciting, less controlled and rewarding if ridden hard down some twisty roads, which is also when its extra bulk and weight compared to some alternatives starts to make itself felt as well. If looking for a used buy you should have little to fear. Hondas of this period are generally well built and durable but you should check the wire wheels for corrosion and, on higher mileage bikes especially, the suspension may be a little tired and saggy. In addition, is there any owner-related damage – more likely with a Transalp than most due to its ‘first big bike’ appeal – either due to rider mishaps or poor maintenance? Accordingly, be sure to check for mechanical or cosmetic damage, ie scrapes, scratches, scuffed or bent levers and controls or, worse, bodywork damage which can be expensive to correct. In addition, be sure to check that everything is maintained, adjusted and lubricated correctly, particularly the chain and controls, and that all consumables (tyres, pads) are within acceptable wear limits. If they’re not, it indicates that the bike hasn’t been well looked after and that there could potentially be more horrors hidden away. Besides, a knackered chain or tyres will cost hundreds to replace. 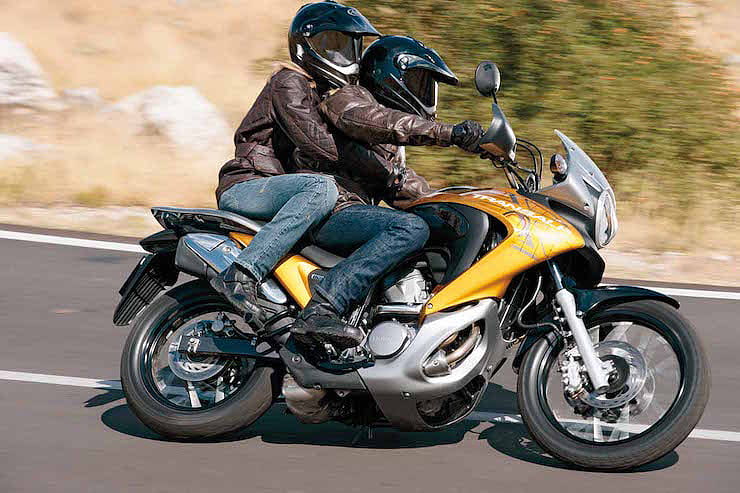 The Transalp’s brakes, although in later years updated with ABS, also show its age compared to some more modern rivals. The twin disc front rotors are grasped by fairly basic, ‘old school’ twin piston calipers and, while not seriously lacking they don’t have the sharp finesse and ultimate power of more modern four-piston radially-mounted types. Considering the type of riding Transalp’s do, it’s not a problem. But if you’re a more, er, ‘committed’ rider or do a lot of riding heavily laden or with a pillion, some braided lines and/or different pads might be a wise investment.

Considering the Transalp is ‘only’ a 700cc, twin cylinder middleweight, its touring comfort is impressive – even now. Although then again, maybe that should be no real surprise as that was exactly what it was built for in the first place – to offer true, Continental touring for two. Its ergonomics and riding position are decently roomy; there’s OK weather protection from the fairing; a reasonable (if a little dated) instrument display and a comfortable enough seat, too. While on top of that its easy, secure handling and soft, flexible power delivery are at their best here, too. Many used examples come with either genuine Honda or aftermarket luggage sets, extended screens, heated grips and so on so if that’s the sort of riding you’re after it’s something to bear in mind. As an affordable, entry-level, classy adventure bike, there are still few better.

Few bikes from this era have the kind of modern electronic rider aids we’ve since become used to and the Transalp is no exception. There’s ABS and that’s it. On the plus side, however, although dated, the Transalp was always intended as a quality, almost luxury machine so the LCD clocks on this later version include both a clock and fuel gauge, the hand guards are welcome, as is the luggage rack, and there’s a huge list of both official and aftermarket accessories available which most owners take full advantage of. If buying used, it’s not unusual to see full colour-coded luggage, extended screen, heated grips, crash protection and more. Checkout the likes of www.ruggedroads.co.uk to see what’s available. 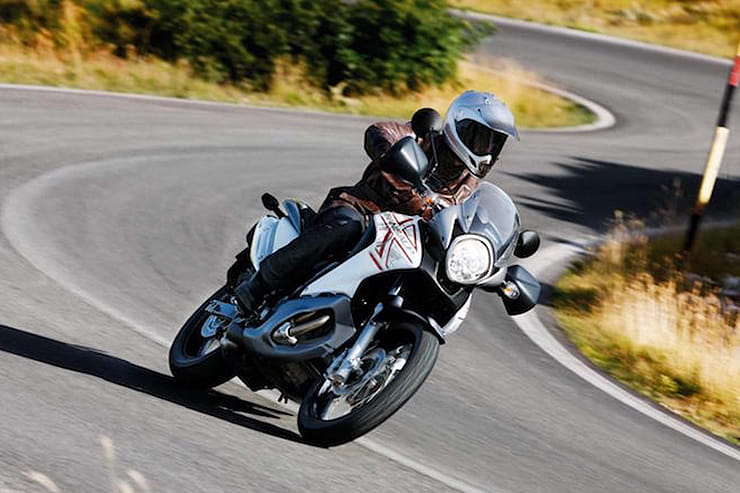 The original middleweight adventure bike dated back to the mid Eighties and made up with versatility and durability for what it may have lacked in excitement. Although now deleted and largely forgotten its quality build, near legendary reliability and durability, easy performance and manners and extensive accessory options mean it’s still a valid, usful and afforsable ‘entry-level’ adventure bike, either for less experienced riders or those daunted by the proportions, complexity and cost of modern full-size versions.

Three things we love about the Honda XL700V…